Ann Wickham is visiting Malta to retrace her late brother’s footsteps and find a deserving home for the romantic letters he had received in the late 1940s from former president Agatha Barbara.

Five years after she unearthed the “romantic” letters written, Ms Wickham, 79, wants to find a suitable place which will host the letters received by the former  Royal Navy signalman stationed in Malta.

The three letters, dated 1949 when Ms Barbara was just 26, clearly convey her fiery passion for politics and for Malta – but also shed light on the sensitive side of a woman who earned a reputation for being a gruff politician.

When Ms Wickham, who lives in York, discovered the letters five years ago, they rekindled memories of her older brother, Derek Barnes, who died in a motorcycle accident in 1951 – two years after leaving Malta – aged just 23. At the time, Ms Wickham was 12 years old.

“Me coming to Malta, walking in his footsteps, it’s part of keeping Derek’s memory alive. I’m the last of the family who knew him. I was one of four siblings and the rest are all gone. My two sons didn’t know him,” she says, adding that she believes the fact that Derek held on to the letters suggests they meant something to him.

This is why she wants to ensure they find a deserving home where they will be appreciated. During her stay in Malta last week, she met with representatives from the University of Malta’s Library, which was recently entrusted with thousands of documents belonging to Ms Barbara by her family.

The university is still in the process of cataloging the letters and has promised Ms Wickham they will let her know if they spot a letter by Derek.

“My biggest hope is that, among her letters, could be one from my brother to her. She obviously received letters from Derek. I’d recognise his handwriting instantly,” she says.

Derek was the eldest of four, followed by Jeanne, Olga and Ann. When Ms Wickham’s sister Jeanne passed away, she was given custody of three albums that belonged to Derek.

Ms Wickham kept the treasured possessions in the top cupboard of her bedroom until, two years later, she went through them.

One fragile, carefully-folded, handwritten letter was sent from ‘The Palace, Valetta’. But the content – penned by a woman – was far from official. The first few words read: “Dear Derek, I am sure you would be surprised with this letter. I haven’t seen you again since the concert at the Hotel Phoenicia, but I haven’t forgotten you.”

It was signed by Agatha Barbara. Enthralled, she Googled the name. Her jaw dropped: Agatha Barbara was no less than Malta’s first female MP and minister. Her face even featured on bank notes when she became the first woman president in 1982.

Ms Wickham’s imagination came to life. Fueled by the tone of the three letters she had in hand, she imagined a budding love. Ever since, Ms Wickham was reconnected with memories of her brother, constantly recounting the extraordinary story she may have uncovered. 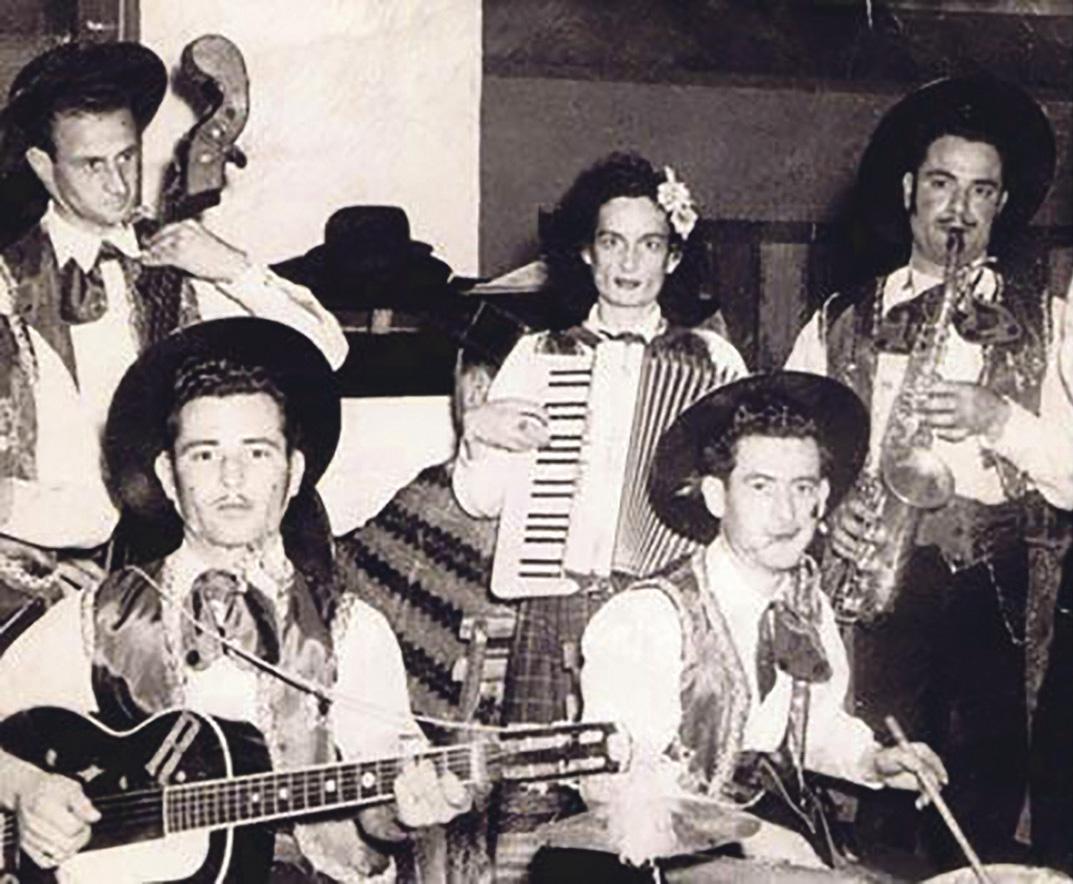 Ms Wickham’s son, Mark Allan, surprised her with a trip to Malta ahead of her 80th birthday celebrations. He booked a stay at the Phoenicia Hotel – where Agatha and Derek first met, according to the letters. The plan was to follow the letters’ trail.

They headed to Ms Barbara’s hometown, Żabbar – from where two letters were sent – where it took them some time to find her monument. They expected it to be in a more prominent position but they found it in the middle of a busy road.

During their stay they also visited The Palace in Valletta, where Derek had been invited to attend the inauguration of the new Maltese legislature.

“The throne room felt very special. Standing there, thinking he was here at Agatha’s invitation,” she said.

They also went to the Malta Stock Exchange, a former services’ club called the Vernon mentioned in the letters – where they got to see bank notes featuring Agatha Barbara.

“We were rather disappointed that there is almost nothing about Agatha Barbara in Valletta other than the picture in The Palace.  She was an icon for women – miles ahead of her time.” 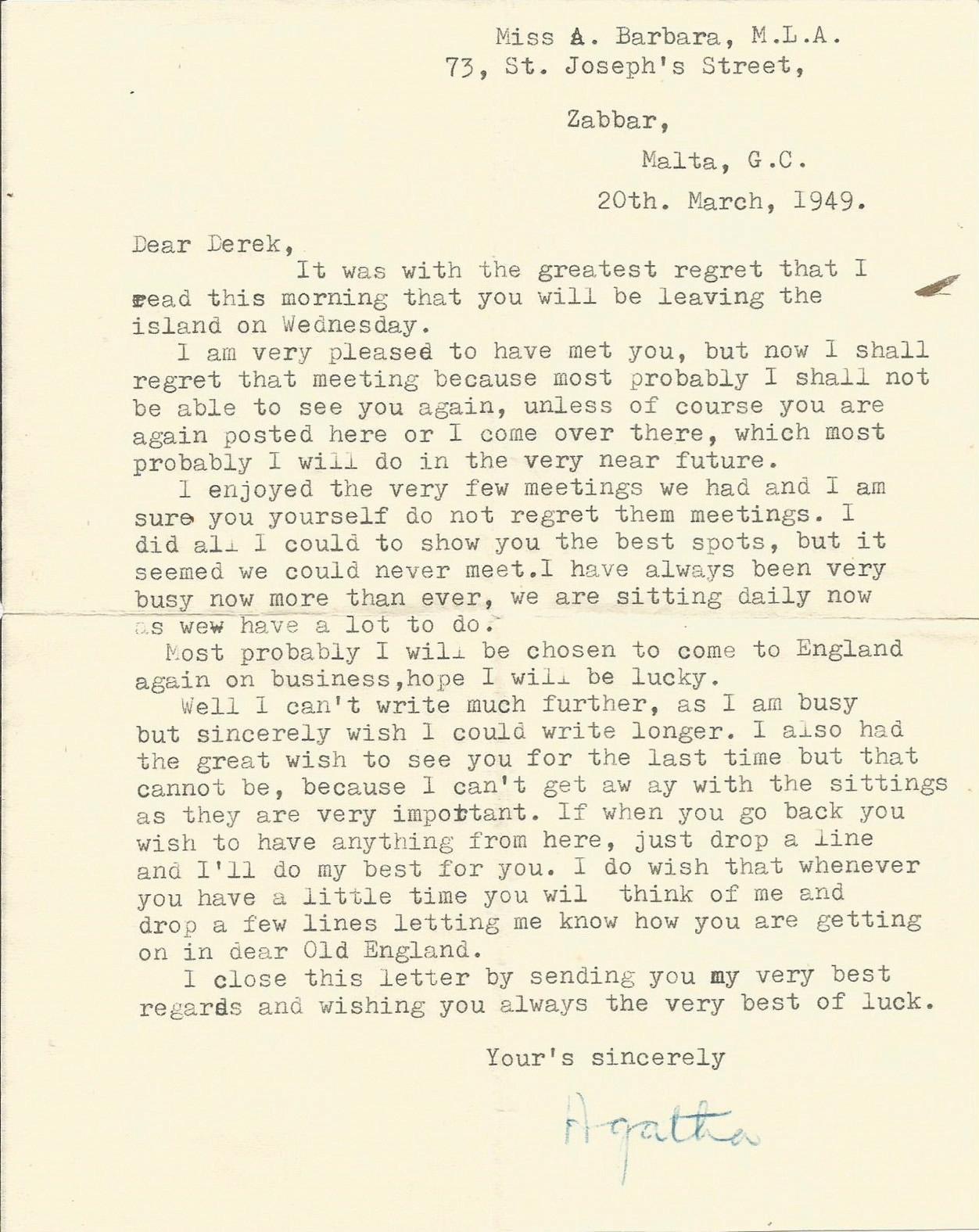 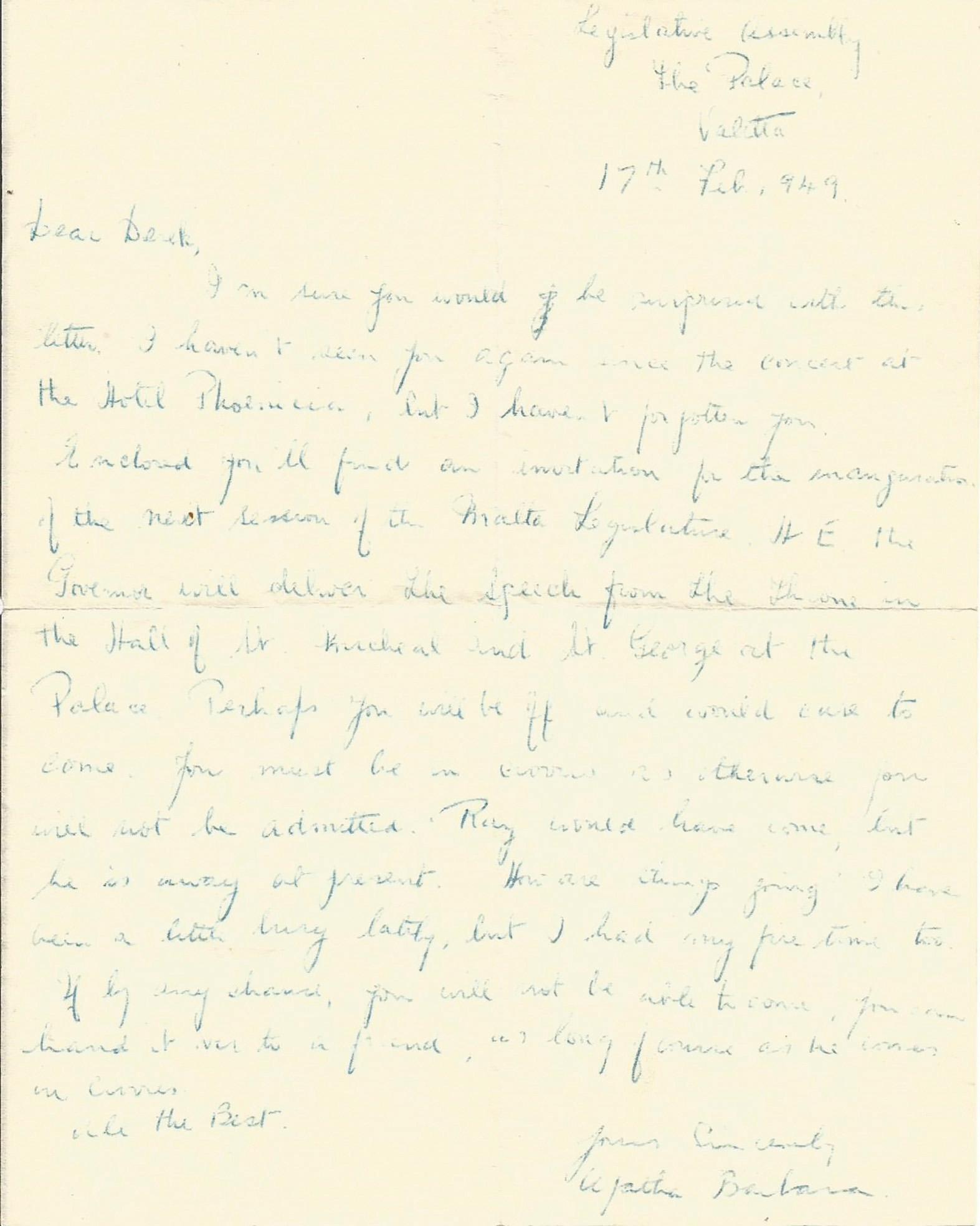 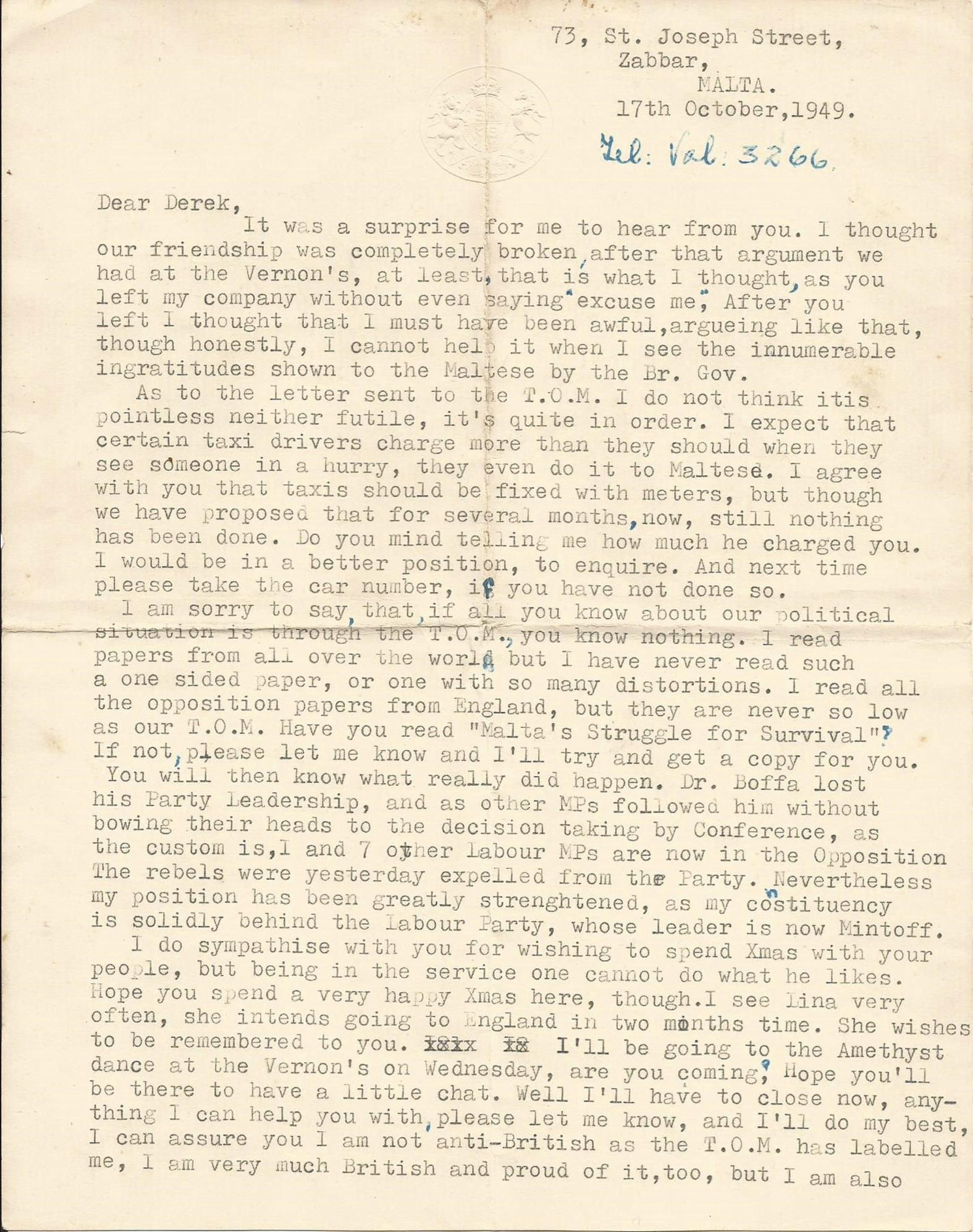 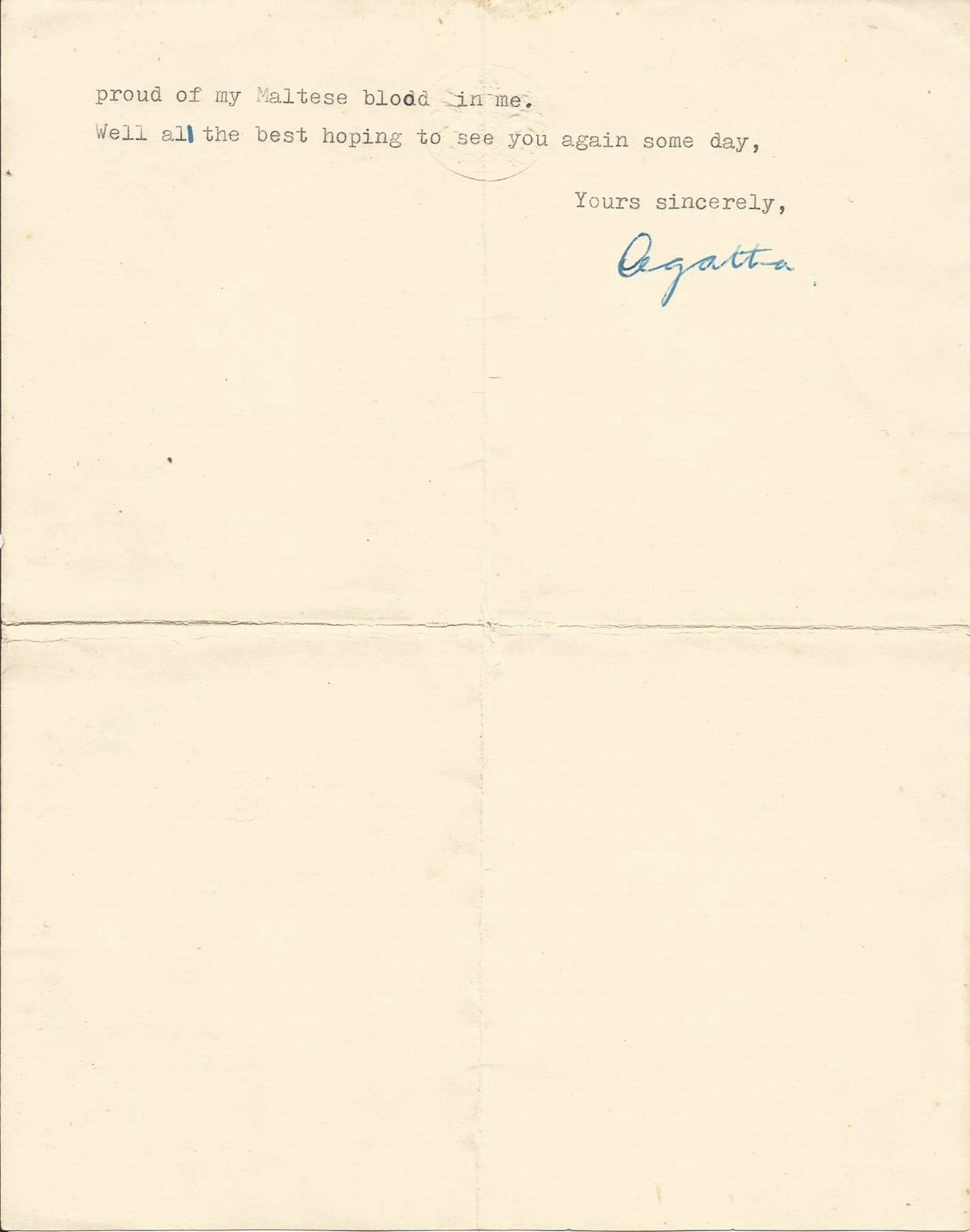 All three letters were written in 1949. Ms Barbara had been elected to the Legislative Assembly two years earlier. That was the year the Labour Party led by Sir Paul Boffa split and Dom Mintoff – whom she supported – became the official leader of the party she was committed to until she died in February 2002.

In the first letter, sent from The Palace on February 17, 1949, she invites Derek to the next inauguration of the Maltese legislature and talks about their first meeting at the Hotel Phoenicia.

The next two letters are typed and sent from her home in St Joseph Street, Żabbar. “Dear Derek, it was with the greatest regret that I read this morning that you will be leaving the island on Wednesday… I am very pleased to have met you, but now I shall regret that meeting because most probably I shall not be able to see you again, unless of course you are again posted here or I come over there.”

She tells Derek she enjoyed their meetings and tried to take him to the best spots on the island, even though she was very busy with the sittings.

The last letter, dated October 17, 1949, reads: “Dear Derek, it was a surprise for me to hear from you… I thought our friendship was completely broken after that argument we had at the Vernon’s”. The letter hints at an argument over taxi drivers overcharging foreigners.

She tells Mr Barnes about the 1949 Labour Party split, a few days earlier, and assures him that she is not anti-British but is “very much British and proud of it, too, but I am also proud of my Maltese blood in me…. Well, all the best, hoping to see you again some day.”

It is not known whether she saw Derek again. But records show he left Malta in December 1949. Two years later, in December 1951, Derek died in a motorcycle accident when he went home for Christmas.