Sengleans witnessed “a dream come true” on Saturday as Archbishop Charles Scicluna inaugurated the choir painting of their beloved basilica during a mass celebrating the first Saturday of the Marija Bambina, part of important commemorations being marked this year by the community. Young Gozitan artist Manuel Farrugia was entrusted with the large-scale work, part of a project that had started in the 1930s but that was unfortunately set back by a series of tragedies.

“We are here to witness a dream come true in this important year when we are celebrating 100 years since the collegiate church became a basilica and the coronation of the blessed statue of the Marija Bambina,” Archpriest Robin Camilleri told the congregation enthusiastically.

“Our compatriot Charles Coleiro was definitely right when he said that ‘we eagerly and heartily await the day when another of our heartfelt wishes is realised’,” Canon Camilleri continued, referring to a statement the veteran broadcaster posted on social media.

In the 1930s, some ceiling sectors of the church were painted by artist Giuseppe Briffa but this work was lost during air attacks in World War II, which damaged some 80 per cent of the church’s architecture.

Years later, in 1981, archpriest John Sladden reattempted to decorate the church and invited Briffa to paint the dome and lunettes. The artist was by then in his 80s but accepted the offer wholeheartedly. He created some bozzettos but in 1984 he got ill and eventually passed away.

In 1988, Archpriest Vincent Cachia restarted plans to decorate the church and in the same year, a call for artists was issued. Artist Frank Portelli was commissioned to do the works. He painted the dome, the lunettes and apse. The aim was for him to continue with the choir but history repeated itself and the artist was struck by illness. He died in 2004 at the age of 99.

Then in 2018, Archpriest Camilleri, along with the Chapter, requested the approval of the Archdiocese to complete the works by the young Farrugia, who had quickly become a household name.

His works are found, among others, at the new Parliament in Valletta, the Gozo Ministry in Victoria, St Paul’s Bay parish church, Paola parish church, St Theresa church in Cospicua, St George’s collegiate church in Qormi, Kirkop parish church, Our Lady of the Annunciation church in Vittoriosa and the Archbishop’s Palace in Mdina. 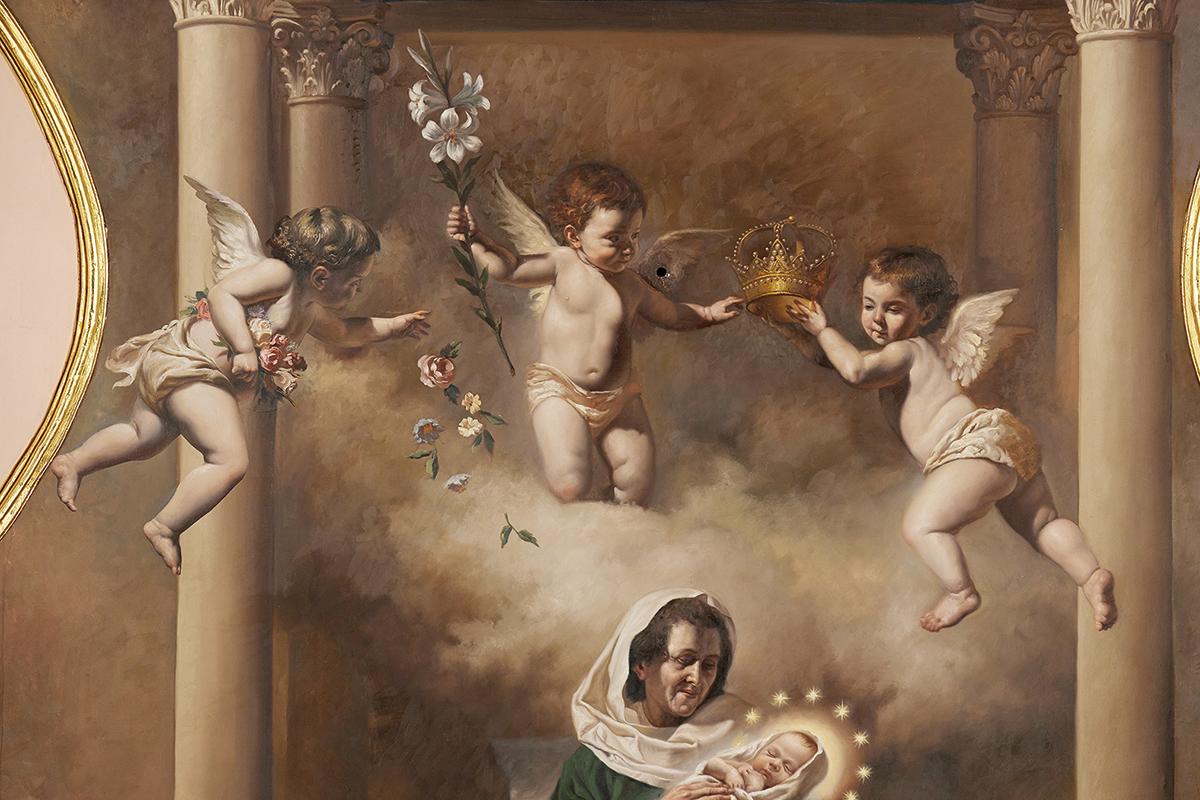 A detail of the choir painting

The 32-year-old has exhibited works both locally and abroad and more of his sacred artworks will be inaugurated later this year. Apart from his evident painting skills, Farrugia shows a deep understanding of the Scriptures as shown by his latest work, which recalls the nativity of Mary. 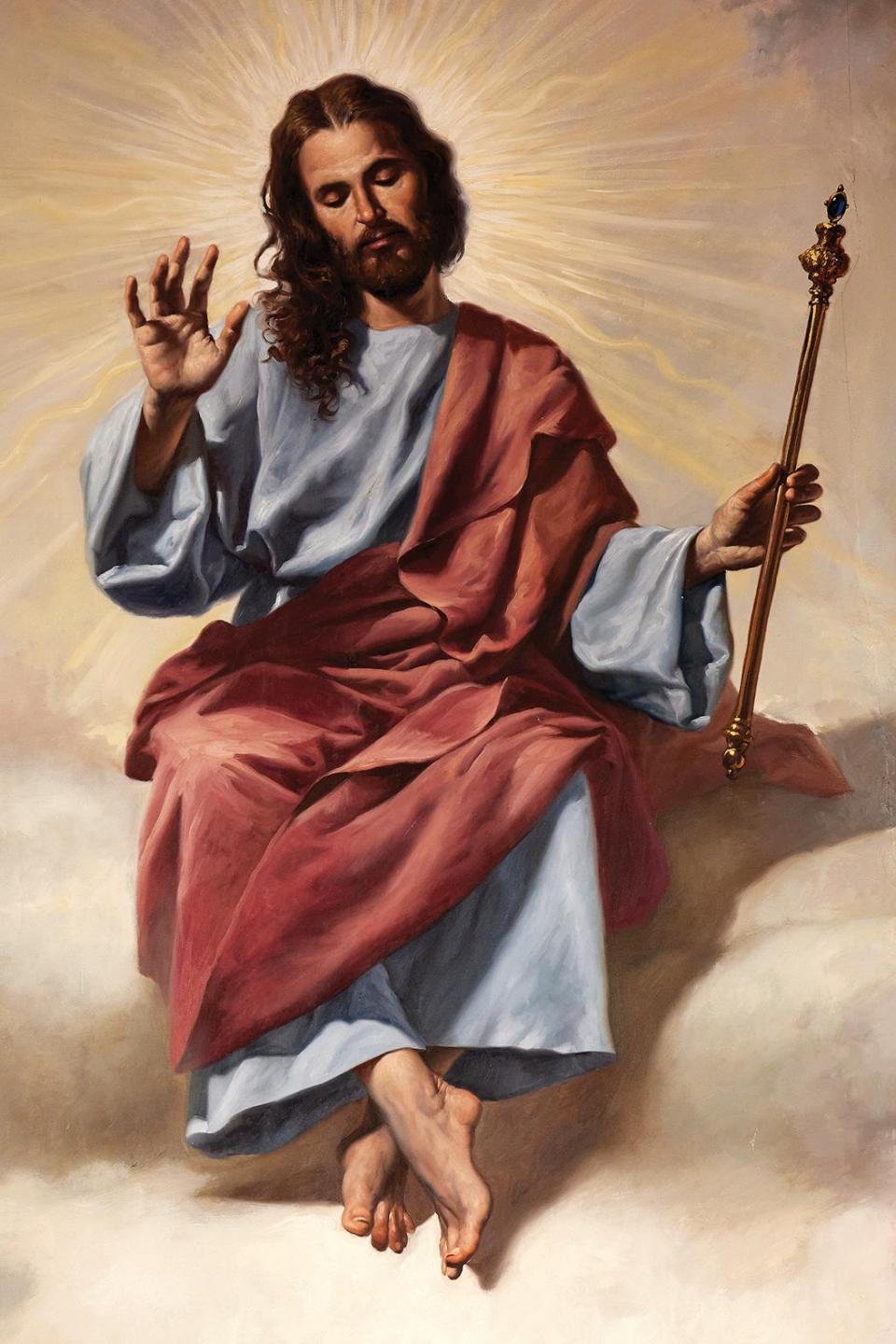 A detail of the new painting

Canon Jonathan Farrugia explained in some detail the painting and its iconography.

“The message imparted by the artistic composition on the choir vault is the prophecy of the advent of the Messiah, in which, although indirectly, we find references to Mary,” he said.

“The painting on the choir vault recalls the nativity of Mary, which was one of the main steps that led to the birth of Jesus. The insight pervading the decoration project of this and other parts of the basilica is a Marian-biblical one, which includes episodes from the apocrypha given that some significant episodes from the life of Mary are not found in Sacred Scripture.”

On the sides, above the windows, the prophets Isaiah and Ezekiel, who form part of the Old Testament plan leading to the incarnation, are portrayed holding scrolls.

“In the books of these prophets we find the most noteworthy references to the conception and birth of Christ which became a reality through Mary. It was thus appropriate for these two prophets to be depicted there, in the sanctuary of the basilica where the miraculous and devout statue of the Virgin Mary is kept,” Canon Farrugia remarked.

The birth of Mary with the Holy Trinity admiring this scene is depicted in the central part of the vault. The angels around them represent the messages that the Triune God sent to earth.

Canon Farrugia noted that The Holy Trinity is represented in an unusual fashion: rather than an elderly man, a young man and a dove, they are depicted as three men who share similar looks.

“The different Persons are recognised through the symbols they carry: the Father is the one with the sceptre, the Son is recognised by his position on the right of the Father and by the cross he is embracing; the Spirit is recognised by the fire emitted from the horn he is holding,” he said.

“The artist chose to depict them bearing similar looks in order to recall the equality among the Persons of the Trinity, according to the doctrine stated in the councils of Nicaea and Constantinople in the fourth century. This was also the way the Holy Trinity was depicted in palaeochristian art from the fourth century onwards.” 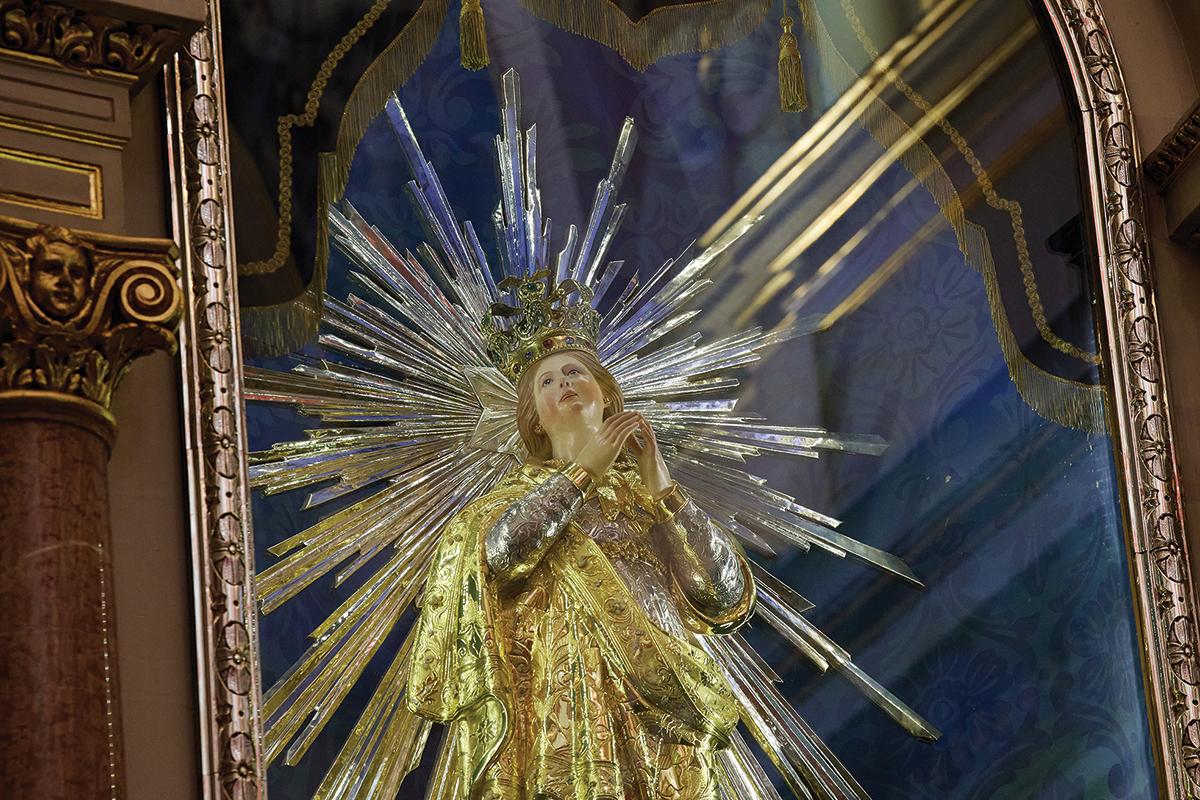 The statue of Our Lady of Victories, locally known as Il-Bambina

Beneath the Trinity there is the scene of the birth of Mary, who is seen as a baby swaddled in her mother’s arms. Next to them there is her father and some handmaids.

“These show that Mary, despite being blessed in a privileged way, was still a person like everyone else who depended on others for her needs,” Canon Farrugia continued.

“The bed on which Mary was born brings to mind a temple; this is because her birth was a sacred event willed by God for the fulfilment of his plan. The objects carried by the putti above the bed – the crown and the lily – point to Mary’s royal ascendancy and her perpetual purity.”

The decoration of the lower part of the vault, beneath the windows is made of different flowers that represent Mary.

“The first two, which are found in the choir, are the common myrtle, which represents the virginity of the blessed Virgin, and the black bryony which since bygone times represents the birth of Mary,” Canon Farrugia concluded.

On Saturday, a book for children regarding the history of Marija Bambina in Senglea was also launched. A bronze medallion, by Fonderia Domus Dei, will be issued in the near future.