The number of women in Maltese parliament is shameful, President Marie-Louise Coleiro Preca has said, as she warned against claims that Malta was eradicating problems of gender inequality.

While there have been several improvements in legislation to reduce the gender gap, Malta was still reeling behind, she said.

The President was speaking to Times of Malta after being awarded the UN's Agent of Change award in New York.

"We are still far away from reaching a quote of serious representation of women in decision-making places," said Ms Coleiro Preca, who is also among the few women leaders invited to speak at the UN. 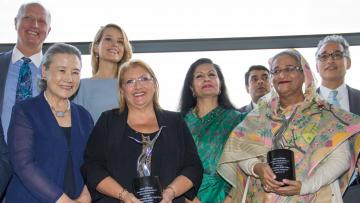 Malta lies in 139th place worldwide where women representation in parliament is concerned, overtaken by countries like Algeria, Tunisia and Cyprus. Just nine of Malta's 69 MPs are women.

"Until we have inequality in parliament, the highest decision-making institution, the representation of women will remain poor," she said.

As the general election looms, Malta's political parties need to do their bit to approach more women to stand on their ticket.

While the introduction of the Istanbul convention into Maltese legislation, which prevents and combats violence against women and domestic violence, was a step in the right direction, it can never be enough.

"We have a very real situation where women involved in domestic violence are suffering in silence," she said, underlining the importance of an education campaign in schools intended to pre-empt problems.

The Gender Equality Index developed by the European Institute for Gender Equality shows that Malta is approaching the halfway mark towards equality between women and men.

Women are seriously lacking from decision-making positions in the political sphere, and even more so from the economic one, the index said. Another serious challenge is in the unequal division of time women and men spend on care, domes­tic tasks and social activities. However, it underlined signs of positive development over time.