Out of sight, out of mind! Ships are usually out at sea in vast oceans making it difficult to perceive any negative environmental effects attributed to them.

As it turns out, the shipping industry has a huge toll on the environment with detrimental effects on marine life, oceans and also the atmosphere. It is estimated that air pollution from ships causes 40,000 premature deaths worldwide annually and the industry makes up four per cent of the total anthropogenic greenhouse emissions.

For centuries, the strategic location in the centre of the Mediterranean Sea made the Maltese islands a maritime nation. Nowadays, Malta is still exploiting its strategic position in the Mediterranean with marine and maritime activities greatly contributing to the economic prosperity of the country. The industry provides employment to more than 20,000 people and accounts for some 15 per cent of the country’s GDP.

The effects of the shipping industry on local air quality in Malta has been highlighted multiple times in the past decade. In 2018, BirdLife Malta reported that NO2 and ultrafine particle concentrations close to the Valletta Cruise Port reached levels 10 times higher than Malta’s most congested roads.

Earlier this year, the government launched a shoreside electricity project aiming to decrease the air pollution from berthing cruise liners in the area by 90 per cent. Notwithstanding, ship emissions from cruise liners account only for a fraction of the total shipping emissions in Maltese waters. Emissions toxic to the biosphere are continuously expelled from tankers and cargo ships cruising or bunkering just a few kilometres off the islands.

The European Space Agency (ESA), together with the European Commission Copernicus programme, is on the forefront of earth observation science and is continually investing into increasing the access to satellite data and supporting related science.

Sentinel-5 Precursor is a satellite dedicated to monitor the earth’s atmosphere and is currently the best tool to identify atmospheric trace gases from space. In a traineeship sponsored by the Malta Council for Science and Technology (MCST), through an agreement between ESA and MCST, I was given the opportunity to work for the European Space Agency at the Centre for Earth Observation (ESRIN) in Frascati, Italy, for 12 months. The aim of the project was to use satellite data to monitor and assess emissions from ships in the Mediterranean Sea.

For decades, the industry has been hardly regulated

AIS data provided by the Department of Geosciences (University of Malta) revealed that in 2019, 12,500 ships crossed the Sicily-Malta channel. A quick analysis of the NO2 vertical column density over the central Mediterranean immediately revealed higher levels of NO2 over the shipping traffic lane between Malta and Sicily. 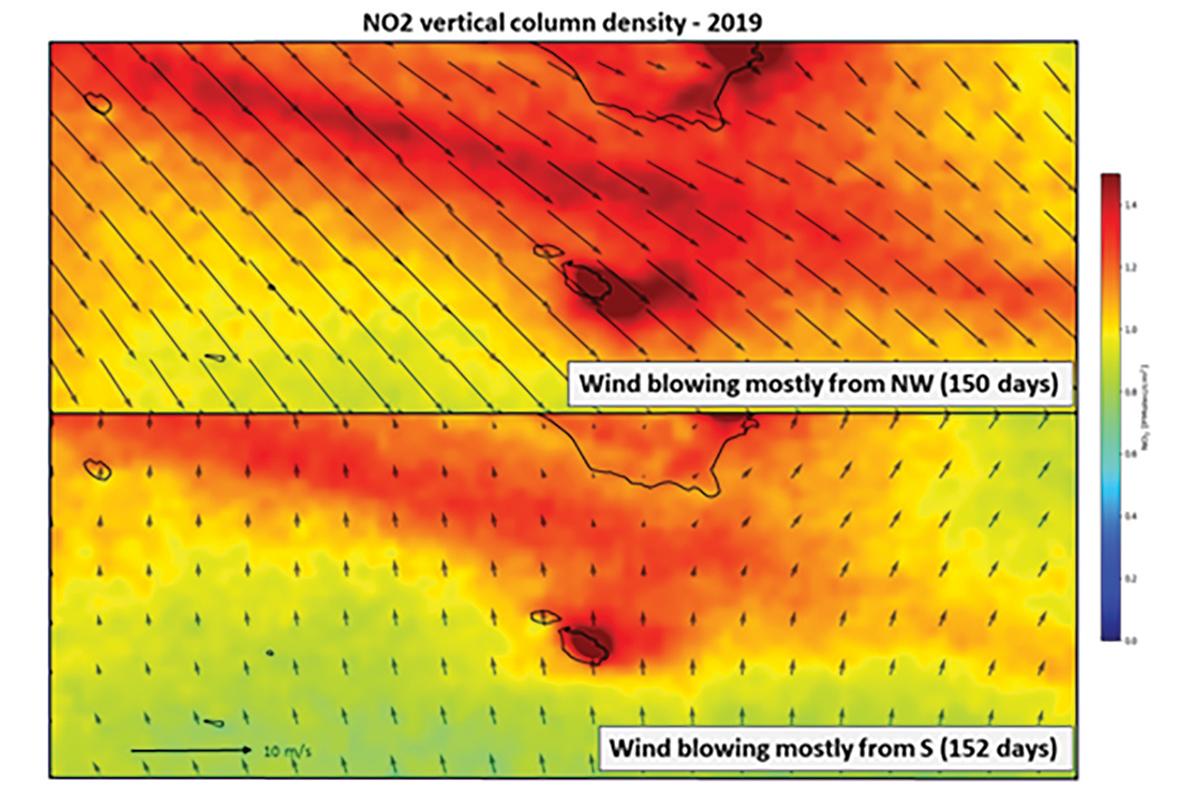 Wind data was used to evaluate daily NO2 levels in relation to wind speed and direction for 2019.

In order to evaluate how NO2 shipping emissions are affecting the air quality in Malta, wind data was used to evaluate daily NO2 levels in relation to wind speed and direction for 2019. It was found that with the predominant wind direction from the north-west (which is about 50 per cent of the year), NO2 levels over the Maltese islands were 10 per cent higher compared to days when the wind was blowing from other directions.

It was also concluded that the daily NO2 vertical column density was above the monthly mean way more often when winds are mostly from the north-west compared to days where wind was blowing mostly from the south. This clearly indicates that the Maltese air quality is affected by transboundary NO2  pollution that mostly comes from massive ships crossing the channel a few kilometres north of the Maltese coastline.

The main reason is that, for decades, the industry has been hardly regulated and most of the ships run on heavy fuel oil (HFO). Formerly used to generate electricity in Malta at the Marsa power station, HFO contains a high concentration of sulphur, nitrogen and other toxic compounds (such as heavy metals), which are all released into the atmosphere upon combustion. Alternatives, such as marine diesel oil or LNG, are much cleaner but more expensive too.

The International Maritime Organisation (IMO) is a specialised agency of the United Nations responsible for regulating the shipping industry, including ship emissions. IMO’s strategy to mitigate shipping air pollution involves cutting down pollutants’ content in the fuel mix currently used.

As from January 2020, the sulphur fuel content across the industry was capped from 3.5 per cent to 0.5 per cent. This will drastically decrease sulphur emissions from ships globally. Stricter capping on sulphur, nitrogen and particulate matter exists in designated areas known as emission control areas (ECAS), which include the Baltic and North Sea areas, but not the Mediterranean Sea.

Ryan Vella has worked for the European Space Agency (ESA) on a project funded by the Malta Council of Science and Technology (MCST). The project involved the study of emissions from ships close to Malta. The research was sponsored by the MCST, within the Parliamentary Secretariat for Financial Services and Digital Economy, through an agreement between MCST and the ESA.