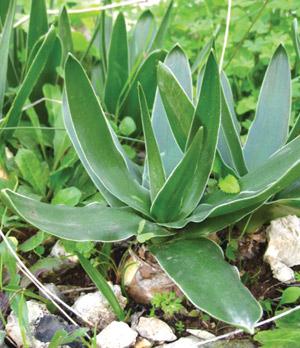 The Sicilian squill or l-għansar ikħal in Maltese is rarely found in garigue and rocky steppes. Its leaves are broad, marginally toothed with a line of short, white hairs. The flowers are in pyramidal to hemispherical inflorescences with pale bluish-grey, seldomly completely white, with blue stamen filaments and green anthers.

This plant is endemic to Malta, Gozo, Sicily and Calabria (Southern Italy); is also very rare in the latter two localities, and rare in Malta. The similar Maltese Squill [Scilla clusii, l-għansar ta’ Malta], a supposedly Maltese endemic but poorly-studied, has deep blue flowers, and is reported from a number of localities in Malta and Gozo.

This plant has been declared a strictly protected plant under the Flora, Fauna and Natural Habitats protection regulations and one should not prune, fell or uproot this plant without previously obtaining the necessary permits from the relevant competent authorities.