Italy ordered travellers arriving from Malta, Croatia, Greece and Spain to be tested for COVID-19 on Wednesday amid growing concern over new infections.

Health Minister Roberto Speranza announced late on Wednesday he had signed an order requiring antibody or swab tests to be performed on all arrivals from the countries and said there would be a ban on arrivals and transit passengers from Colombia.

Malta, which had brought its active cases to almost zero a few weeks ago, has seen one of the most alarming jumps in just a fortnight.

Greece reported 262 new cases of COVID-19 on Wednesday, its highest daily tally since the start of the outbreak, while Spain reported almost 1,700 new cases.

As of Friday, all passengers from Malta must either present a negative coronavirus test, taken 72 hours before departure, on arrival in Italy, or else do the test within 48 hours from arrival and quarantine until the results come out.

Sicilian residents returning home from Malta must self-isolate for 14-days and take a test at the end of their quarantine, as well as register on the www.siciliasicura.com and inform the necessary health authorities.

Non-Sicilians will also have to register on the www.siciliasicura.com website and use the app ‘SiciliaSiCura’ to keep in contact with the regional health service and for eventual monitoring and assistance, according to the new ordinance, which is in force until September 10, and was posted on the Virtu Ferries website.

Exempt from these travel restrictions, taken in view of the number of Sicilians infected following holidays to Malta, are crew members and those operating means of transport, as well as travellers to Sicily for work or health reasons.

Similar restrictions have been imposed on arrivals from Spain and Greece.

It comes after the northern Italian region of Emilia-Romagna imposed checks on tourists from Malta, Spain and Greece – the three countries considered to pose the highest risk of contagion, according to Italian media.

The northern Italian region has decided that anyone flying in from Malta will have to undergo a swab test within 24 hours. The Italian region of Puglia also obliged travellers from Malta to self-quarantine after a surge in infections, with a group of six tourists testing positive after a trip to the island, according to health authorities.

Molecular tests on saliva are said to provide a clear answer in 15 minutes, according to the Italian government, in a procedure that would require passengers upon arrival in Italy to quarantine in the event of a positive outcome as contact tracing is triggered.

Italy is Malta's second-largest tourist market and Sicily, as the island's neighbour is an important destination and is usually a popular destination during the Santa Marija weekend.

The Tourism Ministry and the Malta Hotels and Restaurants Association have not yet commented on the potential impact of these travel restrictions.

Virtu Ferries, which has been busy transporting holiday-makers back and forth to the neighbouring island said it was too early for a reaction, when asked about the reports circulating earlier on Wednesday that Sicily might introduce restrictions.

Managing director Henri Saliba ensured that Virtu Ferries is “very strict in following our COVID-19 safety measures” and confirmed that the “vast majority of our passengers appreciate and follow our health measures to the detail”.

Saliba said he was monitoring developments closely, adding that “from our experience, if measures are implemented efficiently, passengers appreciate this and will continue to travel if in a safe environment”.

Meanwhile, however, the media attention to imported COVID-19 cases from Malta seems to be having its chilling effect.

“I was meant to visit, but I’m not going to take the risk. The situation there is much worse than here, where a lot is being said about how Malta’s COVID-19 cases exploded in recent days,” Sicilian Rosaria Mascarpone told Times of Malta.

“I have a business to run here, so I cannot risk being quarantined for 14 days on my arrival.

“From what I am seeing in the media, you’re not taking it so seriously there. With so many cases, you should be locked inside. I’m not taking the risks!”

A man, who spoke on condition of anonymity, highlighted the “negative hype” around the COVID-19 situation in Malta, saying a friend, who was coming over with his family on their sailing boat for the ferragosto period, has now changed plans and is sailing up towards Italian seaside resorts instead, where the situation seems to be more in control.

He said Malta was being mentioned in all the shops he went to on his morning errands.

“I went to the bank, the grocer and the butcher and I overheard people saying that Malta wanted to become another Ibiza and people were spreading COVID-19,” he said, referring to a group of travellers to Malta, who “brought the virus with them” and to travel restrictions in the pipeline. 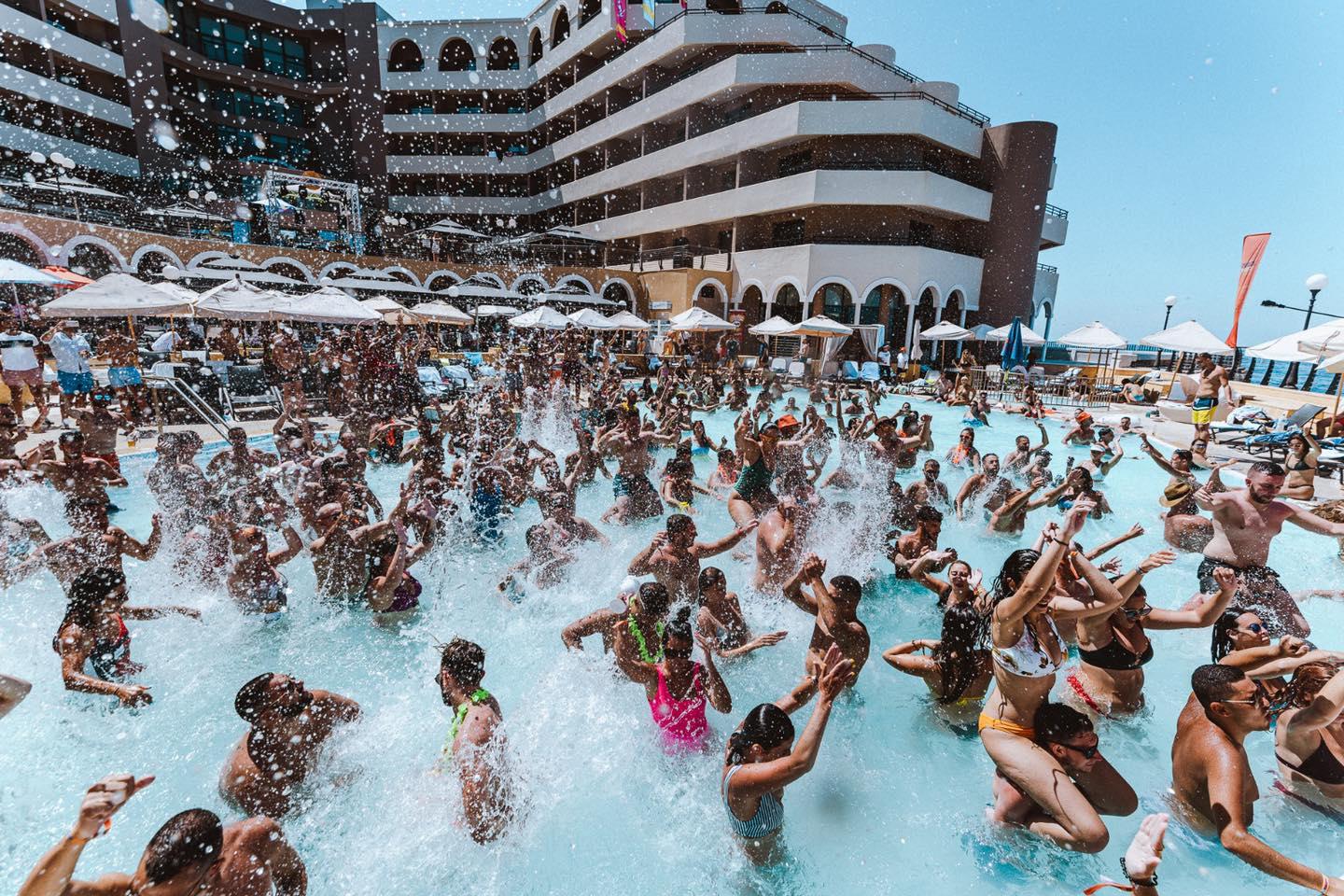 Large-scale parties like this at the Radisson Blu, St Julian's in July, are being blamed for the recent spike in cases. Photo: Facebook

Eleven Sicilians, who returned to Canicattini Bagni, in the province of Syracuse, from Malta have contracted the disease, according to newspaper La Repubblica.

The group of friends holidayed for four days, where they are assumed to have partied in nightclubs, prompting the Canicattini Bagni mayor to comment that he did not think there were many checks in Malta from images on social media.

The article points to entertainment centre Paceville as the origin of the problem, referring to the new measures on mass gatherings, which likely sparked the spike, and the hefty fines introduced.

It described the island as “very popular with young Italians looking for fun at a low price”, adding that it is “no coincidence” that the news of positive cases returning from Malta are being reported all over the country.

Authorities in the southern region of Campania said on Wednesday that 10 people who recently holidayed in Malta had tested positive for the virus. The majority of those cases were asymptomatic, authorities said.

Meanwhile, the Netherlands and Belgium have also asked visitors to Malta to self-quarantine in view of rising infections. The Dutch Foreign Ministry yesterday updated its travel advice from yellow to orange, meaning only necessary trips should be made, and it advised nationals to go into home quarantine for 14 days if they visit Malta.

They join Greece and Slovenia in putting restrictions on travellers from Malta, which has already been taken off the safe lists of Ireland, Latvia, Lithuania and Estonia – all of which advise against non-essential travel and enforce self-isolation for visitors.

In the case of Lithuania, travellers from Malta will no longer be allowed to enter the country, while Greece is requesting a negative test result from passengers, performed up to 72 hours before entry.

The US Centers for Disease Control and Prevention (CDC) have also recommended against all non-essential travel to Malta, although the US is currently not on Malta’s safe list.

Malta has seen a steep increase in figures in the past weeks, with the number of active cases standing at 486 when there were just three coronavirus patients left in the country on July 17.