Siemens pushed for Yorgen Fenech to resign from the Electrogas board after Times of Malta and Reuters revealed he owned 17 Black, the German multinational has claimed.

In a letter sent to rule of law NGO Repubblika, Siemens said it had urged Fenech to resign despite his continued denials of misconduct.

Siemens holds a 33 per cent stake in the Electrogas power station consortium.

The Daphne Project had shown how according to a leaked Nexia BT e-mail, 17 Black planned to pay up to $2 million into secret Panama companies owned by former OPM chief of staff Keith Schembri and former Energy and Tourism Minister Konrad Mizzi.

"In all conversations, Mr Fenech denied any misconduct. Nevertheless, Siemens urged that he be dismissed from his membership on the EGM board of directors after public doubts in Mr Fenech's integrity persisted," the company said. 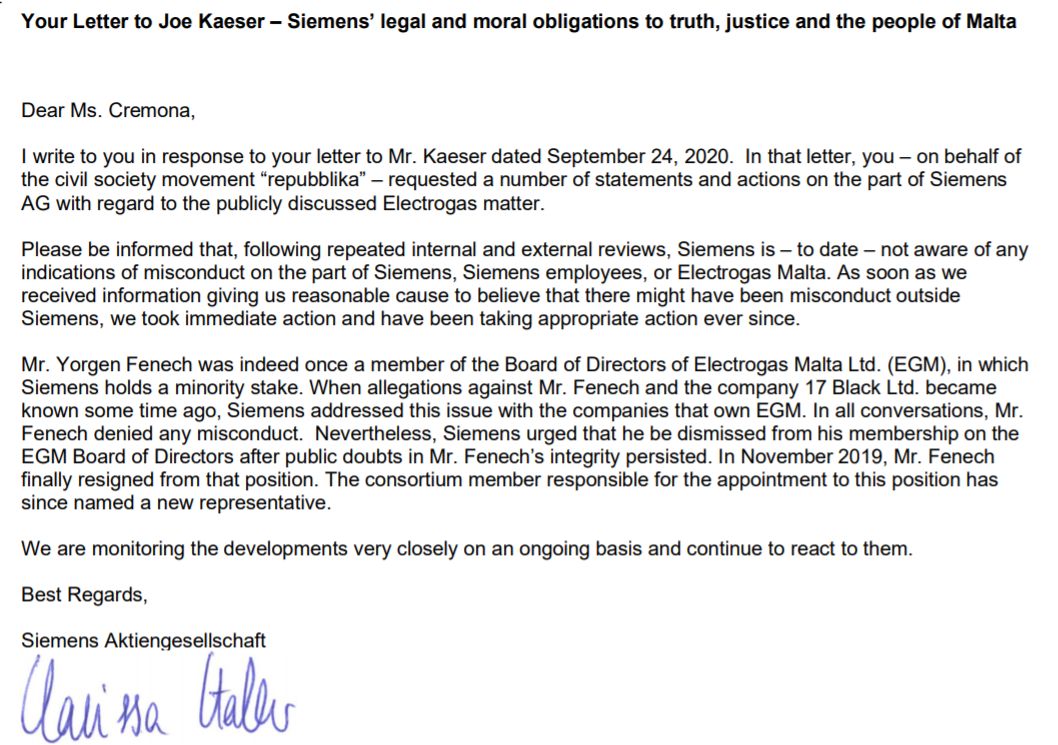 The letter sent by Siemens in response to concerns about the power station project raised by Repubblika.

Fenech resigned from the Electrogas board in November 2019, days before his arrest in connection with Daphne Caruana Galizia’s assassination. Fenech was subsequently charged with complicity in her murder. He denies the charges.

The journalist was the first person to publicly float the name 17 Black in connection with government corruption, although at the time she did not know the company was owned by Fenech.

Siemens said it is monitoring developments in Malta  “very closely on an ongoing basis” and rebutted claims of misconduct by Repubblika, insisting that to date, internal and external reviews had not revealed any wrongdoing.

The company's reply was dismissed as inadequate in a follow-up letter Repubblika sent Siemens on Saturday, in which it pushed the multinational to seriously consider its position as an Electrogas shareholder.

"Your response is entirely inconsistent with the values you profess, and we also suspect that your conduct may very well be in breach of the anti-corruption laws of your country," the NGO's president Robert Aquilina wrote.

On Friday, Electrogas director Paul Apap Bologna admitted during the public inquiry into the journalist’s death that he did not press Fenech about his ownership of 17 Black.

"We asked him about it at a board meeting, but he did not answer us," he told the inquiry.

Apap Bologna’s reply was met with disbelief from the board.

“What did you do when he did not reply? Just stare back?”, Judge Abigail Lofaro asked.

The power station project, which was a key policy plank for Labour in 2013, is increasingly being linked to Caruana Galizia’s murder.

In a surprise statement last week, the Gasan Group announced it would be seeking to pull out of the project.

The Gasan family said it was "mortified and shocked" that the power station project was being linked to Caruana Galizia's assassination.

The project has been plagued by controversy for years and has continued to make headlines in recent months.

A court has heard how former minister Konrad Mizzi ordered that Enemalta absorb an excise tax bill running into millions owed by Electrogas, while Times of Malta has revealed how the consortium was secretly given 18 years of breathing space to pay €18m in damages to Enemalta.

A National Audit Office report into the bidding process for the power station project found multiple instances of non-compliance in Electrogas' winning bid. On its part, Electrogas has said that an internal review found no evidence of wrongdoing.