“The figures are coming back to me,” Joyce Camilleri excitedly reported back to a friend, following a few days of experimenting with the way she handled her paintbrush. 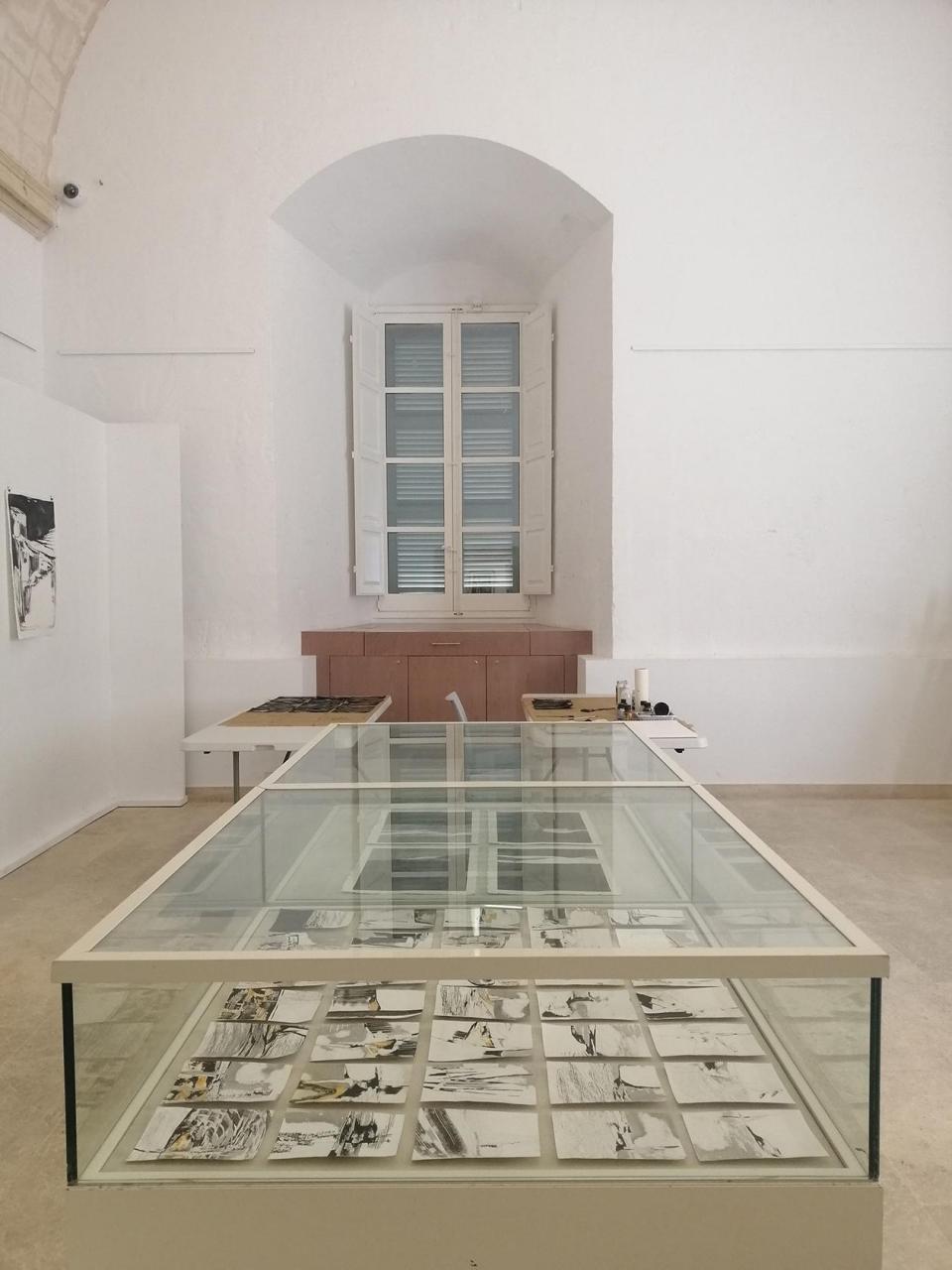 “I knew it would have been a journey to get here,” she laughs, revealing the inductive, spontaneous approach that characterises Camilleri’s current residency at MUŻA.

Entitled Ochra et Nigreos and a mixed media commingling of printmaking and drawing, the residency is an exercise in constant redirection reflected in the choice of medium. The fluidity of Indian ink, the restricted palette and the idea of printmaking as a tool rather than an end product contribute to an experience where the discovery of form and shapes prevails over colour.

The concept of a residency allows Camilleri to present her output as work in progress. Visitors to the Malta National Community Art Museum are able to view and interact with the artist herself, immersed in the process of creating artwork that may or may not make it to the final exhibition.

This ‘behind the scenes narrative’ enables visitors to create a link between preparatory sketches and the final pro­duct and provides for an ever-changing and evolving exhibit where both artist and art are ‘on show’.

Camilleri is conducting her residency in the lofty community space within the former Auberge d’Italie.

“The artist should feel comfortable with where the work is going to be presented as this will affect how the pieces also look. I was attracted to the idea of working here in this space and being inspired in the moment, rather than coming with a predetermined concept or an idea of where I wanted to go,” she states.

The technique adopted by Camilleri begins by rolling black ink on a press. The artist then swipes off a swathe of ink to demarcate a white space. A mid-tone of grey is created by not wiping the plate clean when reapplying ink.

“The material guides me as to what it can and cannot take. At times, things happen on the paper that you would not have foreseen,” she notes. 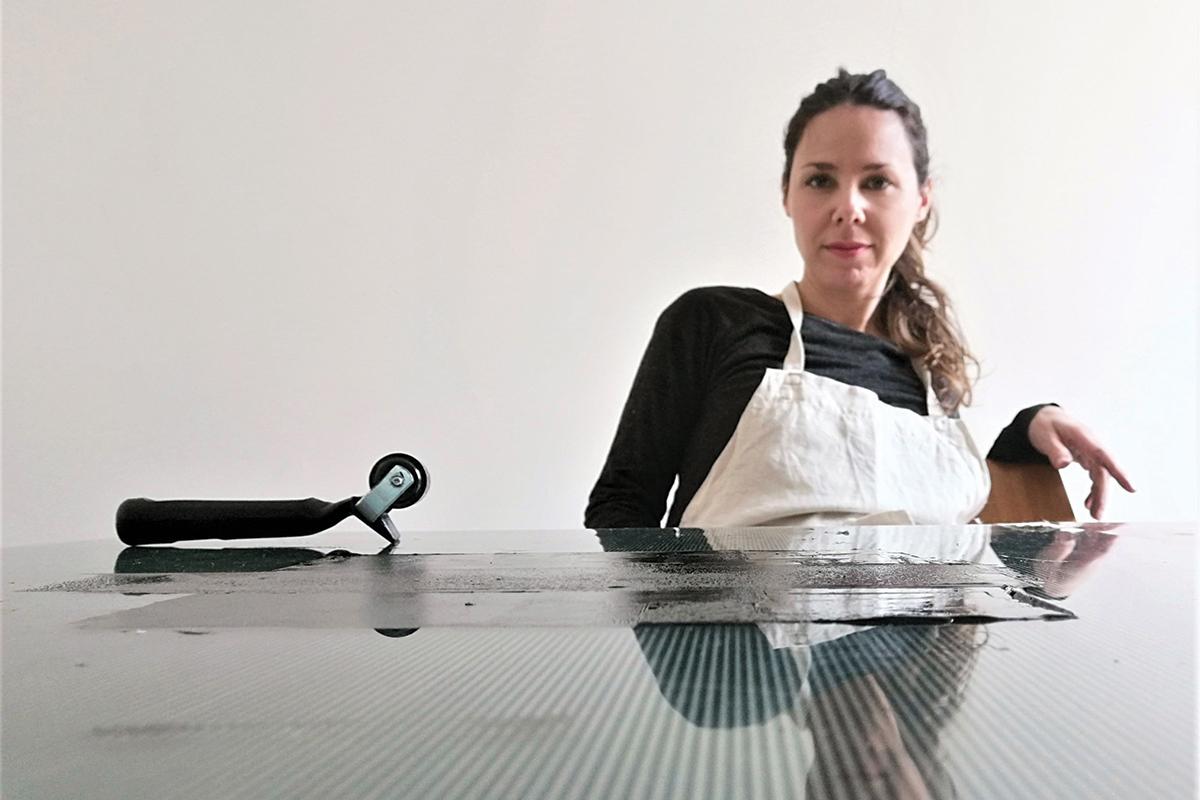 The imprint is invariably an invitation to further exploration.

“The figures are always there, at times they are hidden, at the times they are part of the landscape. I may have blocked out open spaces, thinking I might create landscapes. Instead, I see the outline of a shoulder and a back in the white,” she says.

Camilleri coaxes out the embryonic essence of organic forms and shapes, which she defines in ochre. Another white space suggests a pregnant belly. The ochre circle within it could be interpreted as a baby.

“I’m not pregnant,” Camilleri is quick to stress, chuckling out loud.

The imprint is invariably an invitation to further exploration

“I’m done in that sense!” [She is already mother to an eight-year-old and an 11-year-old.] “Rather,” she continues, “it could represent the birth of an idea.”

“I love the fact that I start off an artwork and am not really sure where it is going to lead me.”

The process must be liberating for someone who curiously prefers to “plan a lot” in her private life. 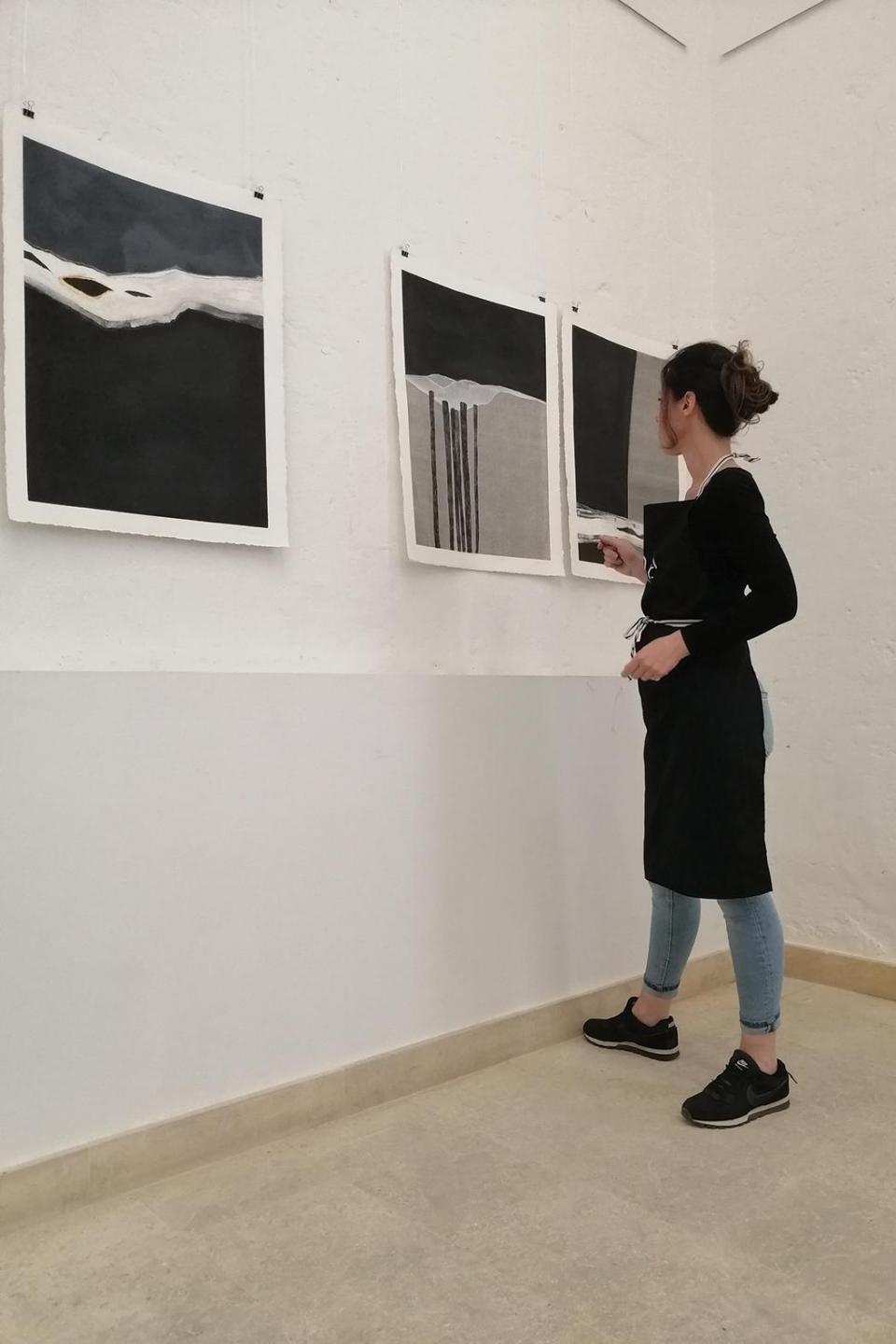 “This is where I let go,” she admits, “letting moments speak to you according to what you see and feel is fascinating.”

However, her artistic spontaneity and natural confidence belies the many years of rigorous training and teaching life drawing at the Malta School of Art.

Different paintbrushes are selected for various sizes of paper. Starting off with smaller images, Camilleri develops the brushstroke pattern as she “goes along”, having long nurtured the instinct of “knowing where to stop and when not to”.

The brush strokes “echo the figures in my head” to the extent that Camilleri can predict the elicited forms by manipulating certain handling patterns. She is inspired by the manner in which Franz Kline handles black paint and the gestural lines of Cy Twombley − “there is nothing, yet so much... with all the openness for interpretation”.

The titular hues establish a source of unity anchoring the myriad abstract forms in the artworks.

Why the choice of Latin?

“I love tradition; I am in love with language in general and the etymology of words, I want to know where they come from. I also loved the way ochra et nigreos sounded together, suggesting the title of a novel.”

The name of the exhibition invokes a veil of “mystery”, a word Camilleri peppers her speech with. As a springboard to the actual residency, she created two archetypal figures, one to represent ochre and the other black. 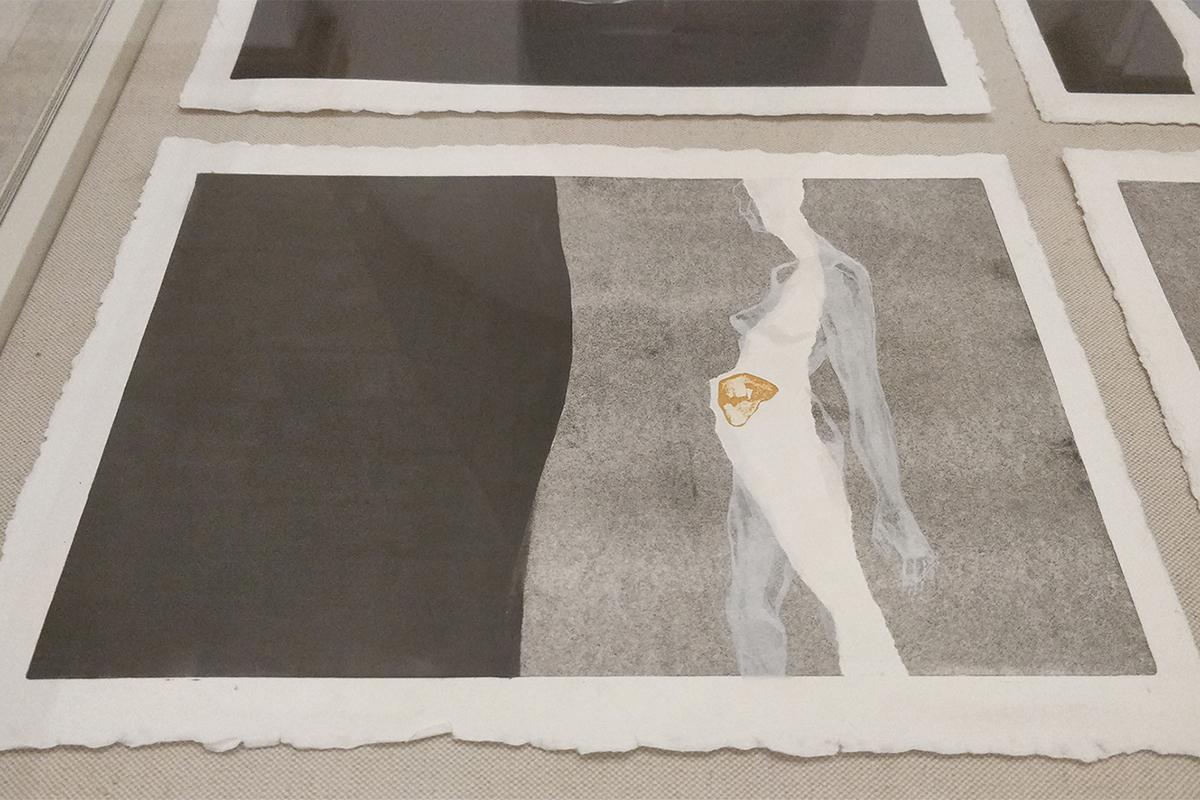 “Nigreos is not darkness; in reality, it is more silence and depth. The moments where we are on our own and we want to delve into ourselves in the darkness.”

Ochre, on the other hand, symbolises enlightenment and inspiration − “those moments of light, when beautiful ideas come to mind,” she says.

On a more theoretical level, the ochre tones provide contrast to the darkness.

“I have to think as an artist, as a poet, and join the two,” Camilleri points out.

In the flesh, Camilleri’s warm and vivacious personality embraces both the artist and the poet, grounded in a wholesome pragmatism. She has chosen to wear a mustard top and black pants for the interview and, with her long dark tresses and animated pale face, she could almost be a living extension of one of her minimalist artworks.

“In my work, there is this tendency to create stories,” she says.

One can observe Camilleri in person drawing another chapter. Ochra et Nigreos runs at MUŻA until May 30 and the artist will be working on site on Thursdays from noon to 4.30pm and on Fridays, Saturdays and Sundays from 10am to 4.30pm. 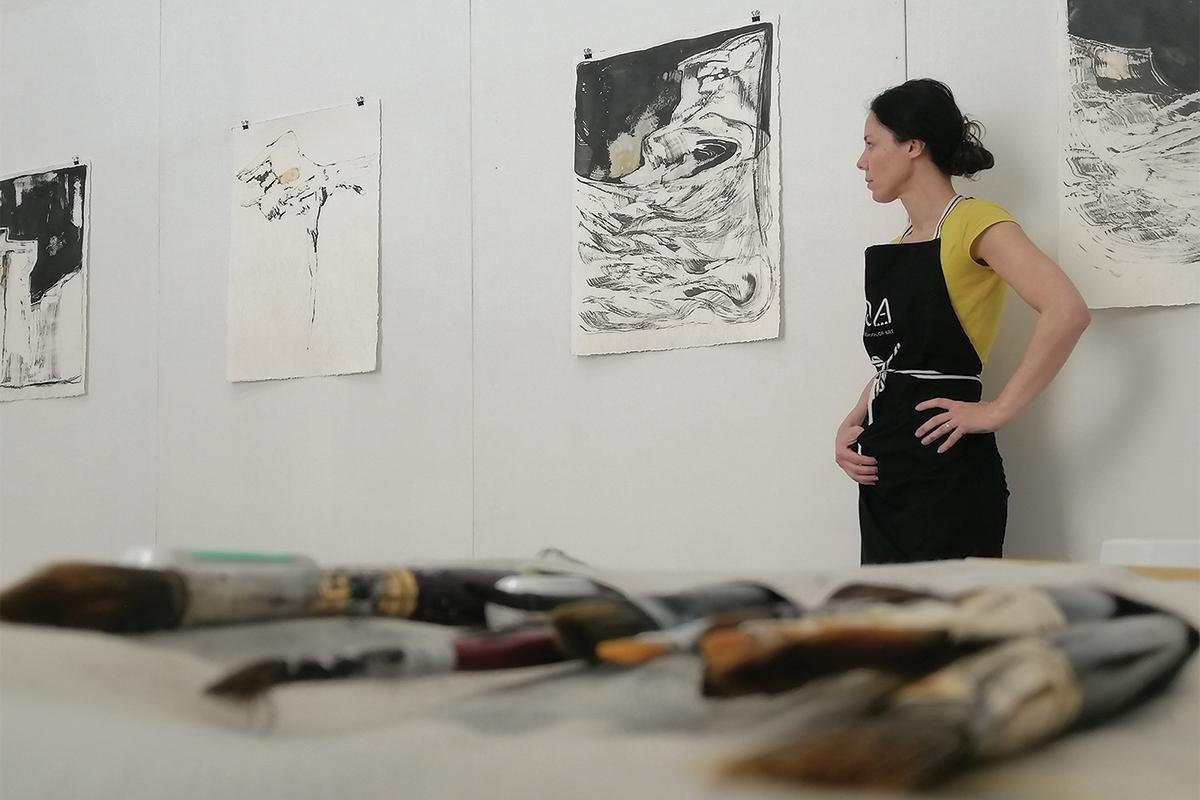