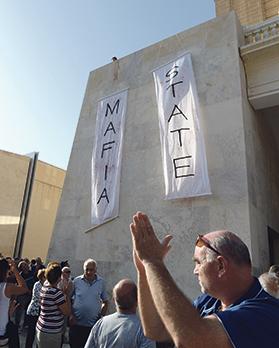 Neither the government nor the police would say who ordered the removal of banners with the words “Mafia state” during Sunday’s civil society protest in Valletta.

Human rights lawyers insist the action by the police was both illegal and abusive. The Police Commissioner was asked yesterday under which legal provision his officers had decided to remove the banners hung at City Gate, but no reply was forthcoming at the time of writing.

The government, too, remained silent when asked about the matter.

HAVE YOUR SAY: Is Malta a 'mafia state'?

Civil Rights Minister Helena Dalli did not reply when asked in writing whether she agreed with the removal of the banners. Dr Dalli attended the demonstration.

Civil society activists attached a banner bearing the same words to one of the pillars at City Gate after Daphne Caruana Galizia’s assassination on October 16. The police arrived a few minutes later and pulled it down.

However, it was returned to the activists after they protested that the police had no right to remove it, arguing such action was in breach of the fundamental human right to freedom of expression.

“The police cannot remove any banners and they cannot act unilaterally as if they are the law,” he said.

“If the police had any suspicion that the law was being broken, they could have arrested those displaying the banners and charged them in court,” Dr Falzon argued.

He insisted that the banner in question and those handling it were not breaking the law in any way but simply expressing an opinion.

Dr Falzon pledged that his organisation would not allow this “bullying” by the police to continue.

“We are ready to legally assist all those who suffer this kind of police bullying. Enough is enough,” he said.

Another human rights lawyer, who preferred to remain anonymous, criticised the police for what he called lack of professionalism.

“It was totally inappropriate to try to stifle people who want to express themselves. People who opine that Malta is some sort of Mafia state have every right to express their opinion,” the lawyer said.

“The fact that the police receive orders from above to try to quash dissenting opinions shows that the message on the banner in question might not be far from the truth after all,” he pointed out.

Reports in the international press after Ms Caruana Galizia’s murder referred to Malta as a ‘Mafia state’.