The first film to be partially shot in Malta, Sons of the Sea, was recently brought to Malta for a public screening. Paula Fleri-Soler finds that our beaches provided the perfect backdrop for this naval tale. 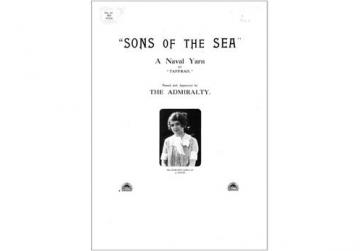 The original poster for Sons of the Sea.

In only a few short years we have become accustomed to watching movies in 3D with sharp pictures, pristine colours and a plethora of special effects enhancing the viewing experience, so it was a bit of a shock to watch the at times grainy, occasionally blurry, black-and-white images from the surviving reels of the 1925 British silent Sons of the Sea.

It was recently brought to light that Sons of the Sea was the first film to be partially shot in Malta. The Malta Film Commission has reached an agreement with the British Film Institute for this and three other movies shot here between 1925 and 1931, to be brought to Malta for public screenings as part of the celebrations being organised in the run-up to the European Film Awards, which will be held here on December 1.

The aforementioned Sons of the Sea is the story of two young men who enrol in the British Navy, which somehow ends with a kidnapping on an eastern Mediterranean island, played beautifully by Malta, specifically the Għajn Tuffieha and Ġnejna areas. There are two reels missing from this – hence the plot confusion – but it’s still worth sitting through the experiences of upper-class officer Derek and gardener’s son Bill at sea.

The films were made by British Instructional Films, a production company that was very prolific in the 1920s and 1930s. While not direct government propaganda as such, they were certainly patriotic in nature. Sons of the Sea is also notable for the fact it was the first purely fictional film for which the British Admiralty allowed its vessels to be used.

The Battles of Coronel and Falkland Islands (1927) is an account of the titular 1914 naval battles. As described by the film’s opening title card:

“This is the story of the sea fights of Coronel and the Falkland Islands – of a victory and a defeat as glorious as victory – a story of our Royal Navy, which through storm and calm maintained for us the freedom of the seas.”

The movie features frighteningly realistic battle scenes, mostly filmed in the sea surrounding Malta, on a number of ships stationed here at the time.

The Marquis of Bolibar (1928) is based on the eponymous novel by Leo Pertuz. The story unfolds against the backdrop of the Peninsular War in 1912. Italian-born cinema icon Elissa Landi plays the daughter of an artist who leads a double life as a Spanish espionage agent. Many of the film’s exterior shots were filmed in Malta, specifically Mdina – many of whose streets and doorways are instantly recognisable – and Żebbuġ, where in one memorable scene the parish church stands majestically over the main square as a cavalry of horsemen ride through, with nary a modern vehicle in sight.

After the silence of these films, the plummy tones of stars Tony Bruce, Carl Harbord and Fay Compton in Tell England come as a broad contrast. This 1931production – the only ‘talkie’ of the set – tells the poignant and tragic tale of two young soldiers who fought at Gallipoli in World War I. Malta’s vast rocky landscape – locations in Għajn Tuffieħa, Mġiebaħ and Marsaxlokk – provided the set wherein the landings were filmed.

This year’s Oscar winner The Artist was the perfect recreation of a silent film, and its stunning cinematography captured the black-and-white images beautifully.

It naturally did not depict the ravages of time, and these films certainly do look their age, but nevertheless, I recommend them highly and this aspect only adds to their charm.

They may certainly seem quaint, but it must be pointed out that the best craftsmen worked on these films, adopting techniques that were new to the fledgling cinema industry at the time.

Moreover, the ease with which these films tell their story notwithstanding the absence of dialogue is fascinating. The title cards that pop up sporadically to drive the narrative forward, together with the efficient way the scenes are filmed are sufficient to engage the viewer’s interest and emotions.

All four films should appeal to film buffs, war buffs, British history aficionados and anyone with a sense of curiosity and nostalgia, and the Malta Film Commission is understandably proud to have acquired these films for local viewing.

Film commissioner Peter Busuttil says to look to the future we have to look at the past. “Malta has a history of film-making,” he explains. “We hope these films will inspire present and prospective film-makers to get involved in all aspects of filmmaking.

We have to harness our various capabilities to create a truly wholesome industry. And to encourage our film-making culture, we need to embrace all aspects of film especially European film, past and present.”

Tell England will be screened at the Mediterranean Conference Centre next Sunday. Prior to the screening, there will be a short discussion moderated by Joyce Grech, executive director of the National Book Council; film researcher Jean Pierre Borg and John Mizzi, former The Times news editor and author of Gallipoli: The Malta Collection.