Simon Busuttil has appealed a ruling by the Speaker disallowing him from asking two parliamentary questions on whether Keith Schembri, the prime minister's chief of staff, had overseas bank accounts.

In a ruling on Wednesday, Dr Farrugia said questions to ministers had to relate to their responsibilities and must be based on established facts, not media reports.

Last week, Dr Busuttil attempted to ask the prime minister whether his chief of staff had bank accounts in Dubai or in Pilatus Bank, but the Speaker also disallowed the questions.

In a Facebook post on Friday, Dr Busuttil, the Nationalist Party’s spokesman for good governance, described the ruling as “a very dangerous precedent” limiting parliamentary work in a way which was not acceptable in a democracy. 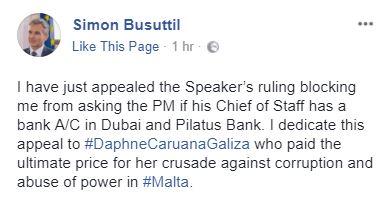 He said he was dedicating his appeal to Daphne Caruana Galizia, “who paid the ultimate price for her crusade against corruption and abuse of power in Malta”.

Dr Busuttil’s appeal motion calls for the ruling to be revised.

The question as to whether the Chief of Staff held a bank account in Dubai and in Pilatus Bank was intrinsically about his behaviour so it was a matter of major, clear and obvious public interest, especially since these accounts were mentioned during money laundering investigations by public agencies such as the FIAU and in international investigations such as the Panama Papers.

He accused the Speaker of applying the Standing Orders in a way which went against the same Orders by censoring an MP from exercising his parliamentary functions.

Such behaviour, Dr Busuttil said, was also unconstitutional and went against the principles of democracy and fundamental freedoms which required an MP to be left free to exercise his function to effectively scrutinise the Executive. 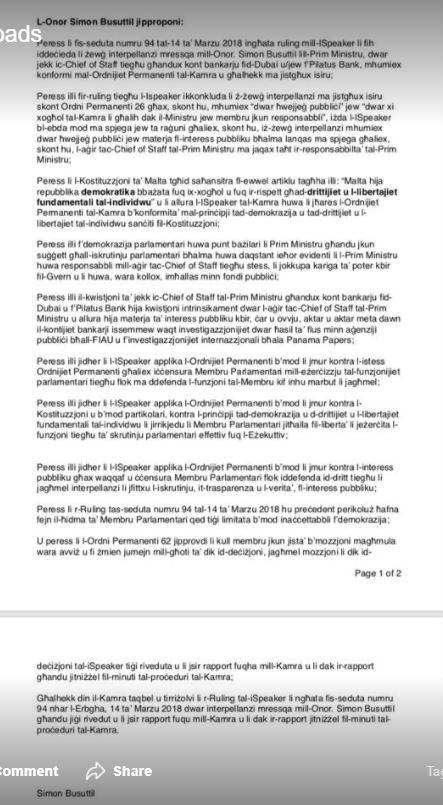