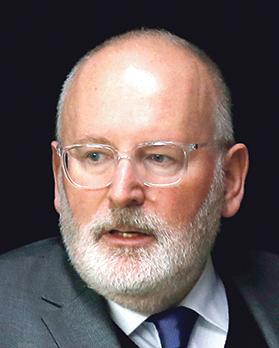 European Commission vice president Frans Timmermans has reiterated that the SLAPP lawsuits from outside EU are to be governed by member states. Photo: Reuters

In a letter to MEPs from different political groups who have proposed EU laws to address the practice of SLAPPs (strategic lawsuits against public participation), Mr Timmermans reiterated that the recognition and enforcement of such suits was governed by member states.

“Recognition and enforcement of judgments from 3rd States, such as judgments delivered in the US against Maltese residents, remain governed by national laws of the EU member states so that member states have the possibility to lay down the grounds for refusal they consider appropriate.”

The vice president went on to add in his letter that the Commission would continue to follow developments in Malta and “defend and protect media freedom and pluralism within its competences”.

His comments echo similar ones made by European Commissioner for Justice Vera Jourová this week in reply to a parliamentary question by PN MEP David Casa. He forms part of the group of Europarliamentarians who have been pushing for Brussels to address the issue.

The government rejected an anti-SLAPP amendment proposed by PN MP Jason Azzopardi to the new Media Bill on the basis of incompatibility with EU law.

Justice Minister Owen Bonnici has repeatedly stated that based on legal advice sought by the government, introducing the anti-SLAPP amendments would have violated EU law.

With respect to third countries, Dr Bonnici has asserted that anti-SLAPP measures were already in Maltese law, which protected journalists from SLAPP cases from countries like the US and that legal advice obtained from both local and foreign experts demonstrated that such protection already existed.

SLAPP lawsuits are designed to silence and intimidate critics by subjecting them to lawsuits in foreign jurisdictions.

Almost all independent media houses in the country have been faced with the threat of such ruinous suits, including the Times of Malta.