Illegal structures added to a kiosk on The Strand, in Sliema have been removed by the developer in the wake of public outrage over the eyesore, the ‘theft’ of the promenade and the lack of enforcement.

An application to sanction the works, which exceeded the kiosk’s permit limitations, had raised questions about the Planning Authority’s inaction when planning law and conditions are contravened.

The PA had approved plans for the kiosk allowing demountable umbrellas and windbreakers up to 1.2 metres high to be installed. Instead, a permanent roofed enclosure for tables and chairs was built, eating into the promenade and obstructing views.

That part of the pavement has now been freed up, as demanded by an online petition.

Application PA/07319/18 had sought to change the design of an already-approved kiosk. The petition said it should have been rejected in the first place as it was in conflict with provisions governing outdoor catering areas.

The PA has said the application was still being vetted and would need to be published in The Malta Government Gazette before the public could submit objections.

It confirmed on Friday that the non-compliant glass enclosure had been removed on the initiative of the developer.

The Sliema local council said the kiosk had drawn objections from the Malta Tourism Authority, the Commission for the Rights of Persons with Disability and the PA’s case officer.

“Yet, a permit was granted. Then, the developer proceeded to extend the structure beyond the permit and the council requested the PA to issue an enforcement notice.”

Instead of taking action, however, the authority refused to issue the notice because an application had been submitted to sanction the illegality, councillor Paul Radmilli said. 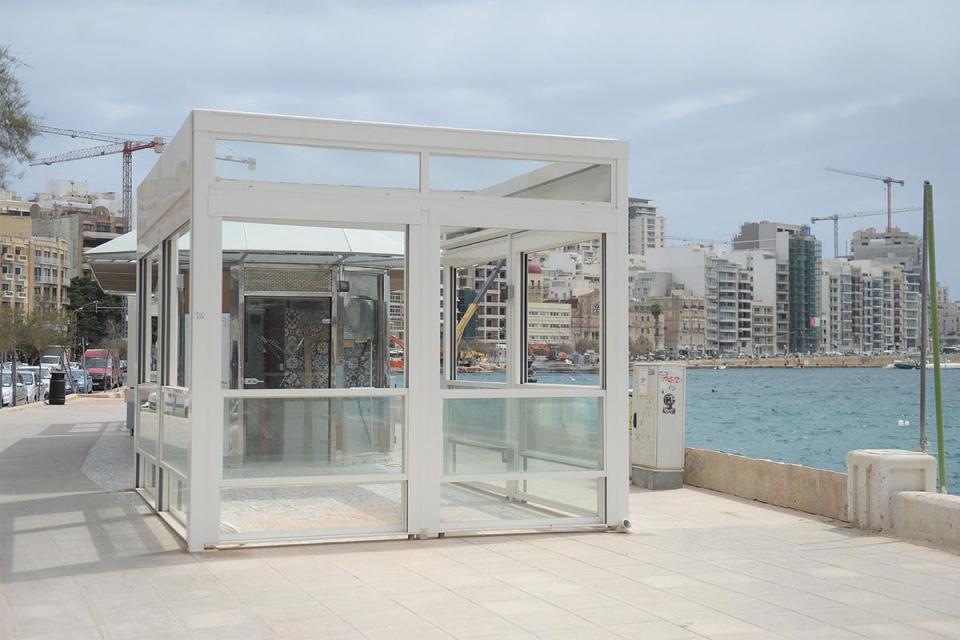 The glass enclosure that was removed. Photo: Matthew Mirabelli

“Such a system is geared to encourage infringements of permits. In this case, the permit should not have been issued in the first place and should be investigated by the minister responsible.

“Policies cannot be interpreted in such an arbitrary manner if we truly live in a country where institutions work,” Radmilli said.

Claire Bonello, legal representative on many planning cases, who has also taken an interest in this, said the dismantling was “definitely called for”.

The PA was “engulfed in a deep credibility crisis where it approves and tolerates huge breaches of the law while cracking down on minor contraventions,” she said.

“This inconsistency and discriminatory approach have led to the atrocities and injustices all around us.”

Flimkien għal Ambjent Aħjar welcomed the dismantling of the structure but said the case raised a number of questions.

The group asked why the Planning Commission had approved a structure it said violated outside catering regulations, and why the tables and chairs remained in place when these were prohibited for kiosks under the same regulations.

"Why is the planning system rigged to allow developers to sanction abusive structures that they themselves have built, thereby profiting from abuse? Where is the accountability of the persons who approved this illegality, namely Perit Simon Saliba, Perit Anthony Camilleri and Perit Mariello Spiteri," FAA said.