People who want to run their own business but don’t have financial backing can find it hard to get their ideas off the ground, especially without a bank account. But Malta Microfinance, a volunteer-led financial service, is helping those determined to help themselves through tiny loans and good advice. Mario Cacciottolo reports.

Customers at Moshair Rahman’s market stall in Floriana come armed with numbers – the models of their mobile phones.

Once that’s been called out, he rummages through piles of phone covers and expertly snaps the right one around devices of all shapes and sizes. One elderly man looks impressed as he slips a snug new case into his top pocket, before handing over five euros.

This thriving business began with the help of funding from Malta Microfinance (MMF), which loans small sums to those unable to access the usual banking services.

Mr Rahman borrowed €2,500 to get going with, paying it back at €210 a month. He describes the financial service that got him started as a “friend of business”.

“I bought my first stock of mobile phone covers with the first loan. This meant I could earn enough to feed my family and pay rent.”

Then he borrowed the same amount again to buy more stock, of brightly-coloured phone covers and funky Bluetooth speakers and handy chargers and little radios, all imported from Italy.

With his market stall thriving, he’s now planning to open a convenience store, and has just successfully applied to run a money-transfer business.

Mr Rahman, 32, who is married with two children and with another due in May, spent nine years in the Bangladeshi army. But he had to leave the country due to “political reasons”, and now Malta is his home.

“Malta Microfinance’s support was very important to me,” he says.

I bought my first stock of mobile phone covers with the first loan. This meant I could earn enough to feed my family and pay rent

The offices of Malta Microfinance are found in Valletta’s Old Bakery Street, next to St Andrew’s Church of Scotland.  It’s the first and only registered microfinance service in Malta. The Church is the main shareholder – it gathered funding, via a Europe-wide charity project, to help migrants and vulnerable communities in Malta, and in 2013 a portion of that was allocated to start MMF.

Registered with the Malta Financial Services Authority as a financial institution, it’s not an NGO, nor is it a charity. It has a loan book and it needs to get its unsecured loans back to stay in business. Interest isn’t charged, but its clients pay 10 per cent as an arrangement fee on their contract.

MMF’s chairwoman is Christina Lejman, whose full-time job is fundraising officer at the Migrant Offshore Aid Station, which organi­ses aid at sea for migrants crossing oceans around the world.

“We focus on vulnerable communities, those who cannot access a bank,” Ms Lejman says.

“So really, if you’ve got a bank account and could go to BOV for a small loan, you’re not really our target client.”

Financial help is “absolutely” available to Maltese people as well as migrants who are stable here and plan to stay. Aside from Maltese, so far MMF has loaned money to Somalis, Libyans, West Africans, Nigerians and Europeans.

MMF’s loans are capped at €5,000 but can be as little as €100. Applicants must have a clean police record, identification and proof they can pay back what they borrow. 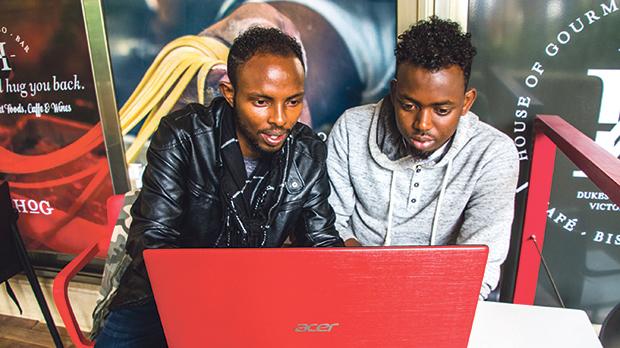 Muse Abdekadir, left, and Abdul Mohamed were able to purchase a laptop each thanks to Malta Microfinance. They are now are studying programming at Mcast.

Loans fall into three categories – the first is for small businesses, while the second is for those wanting to further their education, who need to pay for vocational training and equipment such as laptops or books or welding kits.

The third category is for rent, to help people out of temporary accommodation or – in most cases – poor-quality housing.

The rent loans are typically between €300 and €700, which cover a deposit and first month’s rent. These are repaid over a year. Some people repay just €8 a month.

“It’s not in our interest to give loans out to people who are already financially struggling,” Ms Lejman says. “Thinking that we might be getting people into debt is one of the main reason for us refusing a loan.”

She explains that her favourite part of the process is “when you see people blossoming”.

“When they come in and pay back a piece of their loan they feel proud that they’ve got that money together, they take a bit more ownership of the whole thing.

“We’re just facilitating what someone else is capable of. The finances are almost incidental to what’s really happening, which is that somebody’s taking control of their life and developing themselves, either in a business sense or on a social level.”

It’s not just cash that’s available, as there’s expertise and guidance on offer too. Some of MMF’s volunteers are from financial backgrounds – some used to work at the World Bank – and act as mentors, reviewing business plans and matching people up with an accountant.

And, Ms Lejman says, there’s room for still more knowledge to come on board.

“We’d like to call on those Maltese and local residents who are retired, or have a specific skill set related to finance or business, to come and volunteer time for us, to mentor a business or even some of our committees.

“Because we’re registered with the MFSA we have to do some things that big banks have to do, like GDPR and quarterly returns.”

Currently MMF is particularly focusing on reaching women, as they have hardly any female clients.

“It’s hard to get women to come alone to discuss their finances and sign financial documents,” Ms Lejman says.

“We’re trying to make conversations about money more normal and make this a softer environment to visit, so people don’t go to loan sharks – there’s a problem with that in Malta – that are going to get you into a bad situation. But we don’t give loans to pay debt.”

“People come to you with a certain situation, they want money, and then you identify that they need to solve certain other situations before they can take the loan,” Ms Ellul says. 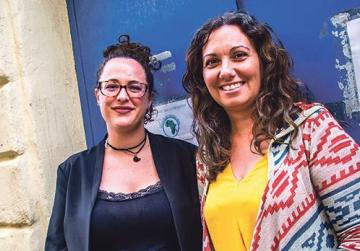 “We budget everything to­gether. We get their payslips and work out together how much the rent is, and how much they can afford.

“One thing leads to another for people who take our loans – there’s an improvement in their work, a better salary. It’s very rewarding to see.”

If a loan is refused, then part of Ms Ellul’s job is to find another solution for that person by referring them to another ser­vice, or the Church, or a grant-giving service.

She has worked with refugees and asylum seekers for the past 10 years, and her connections with those communities has led to a “snowball effect”, whereby one person talks to another and word spreads about the financial help on offer.

This has been added to by references from NGOs and government agencies, all part of Ms Ellul’s outreach efforts to spread the word about MMF. The past six months have seen several social workers asking if their clients are eligible for loans.

Over in Gozo, two Somalian men have got big dreams. Muse Abdekadir and Abdul Mohamed are two migrants who both want to be software programmers. They like Gozo because it’s quieter, and a better place to study.

They needed €500 each for two laptops. So they both borrowed €300 from MMF, repaying €27 a month. The remaining costs were paid for by an NGO.

Now the pair are studying programming at Malta College of Arts, Science and Technology (Mcast).

“I’d like to get involved in the technology community in my country if I go back one day. So that’s why I choose it and I like it,” Mr Mohamed, 22, says.

“I’d also like to help myself get a nice job and have a good future.”

The Maltese government helped us. They gave us clothes, shelter, free education and we’re trying to be part of the Maltese community

He says that when he arrived in Malta on a boat “it was a disaster, we didn’t have anything”.

“The Maltese government helped us. They gave us clothes, shelter, free education and we’re trying to be part of the Maltese community. We’re not different from other people. Some think we can’t learn anything. That’s why we’re trying to show a more positive image for immigrant people.

Mr Mohamed adds that neither of them had any money when they began their course, so MMF’s help was invaluable.

“They believed in us, and to believe in someone is very important. We appreciate it and want to thank Malta Microfinance a lot. They’re always in our heart.”

Mr Abdekadir, 23, explains some migrants in Malta “don’t think they can study. They just work, work, work and fight with their difficult lives”.

“But I preferred to start studying. I’m still young, I can do something to improve my future and achieve my dreams. I would like to be a good person, with a future.”

He says migrants can’t take loans from Maltese banks, and shops won’t lend them the money to buy computers or tools.

“Malta Microfinance gave us a good opportunity. We can’t pay all the money at once, but this way, step by step, we can do it.

“We left Somalia because we were looking for peace. Now we’ve got peace and a life. Thank God, and thanks Malta.”