The gay marriages bill sailed through the first vote in Parliament this evening, backed by both the government and the opposition except for Nationalist MP Edwin Vassallo, who voted against in the second reading stage.

A group of some 30 people held a silent protest outside the House while the vote was held.

At the closing of the debate, Opposition leader Simon Busuttil spoke strongly in favour of the bill, saying MPs had a duty to grant and safeguard rights for all members of the community. If that conflicted with their religious beliefs, he said, they could then personally opt not to exercise those rights.

Dr Busuttil, however, reiterated the Opposition’s calls for references to ‘mothers’ and ‘fathers’ not to be deleted from the law. The word ‘parent’ could be added to achieve the gender neutral purpose of the bill, he said.

But Prime Minister Joseph Muscat disagreed, saying people could not be ‘categorised’.

Dr Muscat also announced that the final vote on the bill would be taken on Wednesday.

While the debate was being held, a group of some 30 people gathered outside Parliament in protest.

None of those present wanted to give comments, insisting that the placards they were holding "said it all" and that this was a silent vigil. Some of the placards read: "traditional marriage is God's marriage - one woman and one man" and "allow a conscience vote" among others.

Gift of Life's Paul Vincenti told Times of Malta that those present did not feel represented by the lawmakers who drafted the Bill. 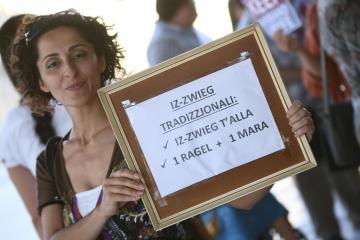 "We only got to know what was in the Bill 18 hours ago. Those of us here want our name to go down in history that the law is not being passed in our name".

Those present hailed from the Unborn Child Movement, the Life Network Foundation, the Gift of Life Foundation and the Women for Life group.
They included Pastor Gordon Manche and Ghaqda Patrijotti Maltin secretary Henry Battistino.

The proposed bill has created controversy not only over its purpose but also the details of the text, which remove all references to 'mother' and 'father'.

The Opposition had said it will vote in favour but it will move amendments to the text during the committee stage. However Nationalist MP Edwin Vassallo this morning said he will vote against. 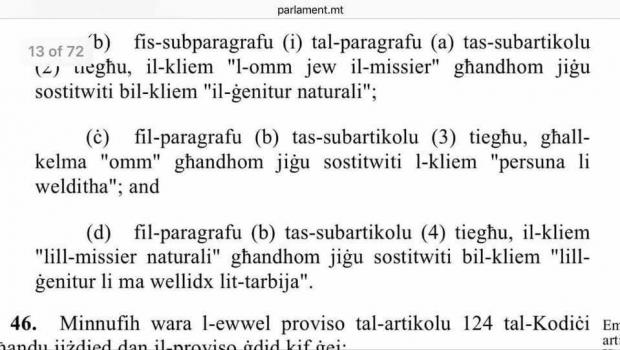 ALARMED FLORIST COMPLAINS TO MINISTER OVER THE 'END OF MOTHER'S DAY'

During the debate this evening, minister Helena Dalli, who moved the bill, said the level of debate was dismal, with some MPs resorting to lies, such as that people could no longer use the words mother or father, or that Mother's Day would be removed.

This was ridiculous, she said. The language used in everyday parlance was different from legal text. But still, she said, some people had been alarmed. She had even received a letter from a florist concerned by the potential loss of business should mother's day be removed.

Mother's Day and Father's Day would not change, she insisted.

But the opposition should be ashamed for trying to go back to the stone age for lack of argument over the purpose of the bill.

Opposition leader Simon Busuttil reiterated that the Opposition would vote in favour of the bill on second and third reading, because its consequences were the same as the civil partnerships law, and this bill had also been promised in the PN electoral programme.

There could be no free vote on something which had been promised in the electoral programme, he said.

The PN backed this bill because it backed equality and the common good, he said.

Dr Busuttil spoke of how he, in the European Parliament, learnt more about and better understood the arguments by the gay community and like the EPP group he had in the past voted against, then abstained and eventually backed and even proposed motions giving rights to all.

He said that in what was probably his last speech as leader of the opposition in the House, he was pleased to be speaking on this occasion in favour of people's rights.

It had been too early, in 2013, for the PN to back the Civil Partnerships Bill, he said, although he had wished it. It was a delicate matter and in the interests of unity, the party decided to abstain.

But the party moved on since then, as society had moved on. Thus, in 2014 the PN backed the Gender Identity Bill and he was now proud that it was backing this bill.

He said he understood the dilemma faced by some because of their religious convictions, but MPs had a duty to give and safeguard rights for all. Those MPs could then choose not to exercise those rights, if they felt a clash with their religion. Divorce was a case in point but also other issues, such as contraception.

The PN, Dr Busuttil said, did not speak for the Church and it sought to represent all of society.

Dr Busuttil said he was appealing for unity within the PN group, and even within the House, on something such as this, in the interests of the common good.

He urged the government to amend the bill to retain references to 'mother' and 'father'. The gender-neutral purpose of the bill could be achieved by adding 'parent', he said.

But even if the Opposition's suggestion was not taken up, the Opposition would still back the bill, he said. The gay community had a right for equality, he stressed.

MUSCAT: THE KEY ISSUE IS EQUALITY

Prime Minister Joseph Muscat said the principle of this bill was not marriage, but equality for all.

He observed that there were other laws which were gender neutral, and no one had protested in the past.

The government, he stressed, was not ready to accept any amendments which categorised people.

Referring to Edwin Vassallo's decision to vote against, he said he could not understand how a candidate could contest an election when he disagreed with a point in his party's electoral programme. Labour used to have an MP, Adrian Vassallo, who decided not to seek re-election exactly because he disagreed with issues such as this.

But he was also perturbed, Dr Muscat said, how some Opposition MPs disagreed with the bill but said they would vote in favour. Honesty was called for, he said.

He said he looked forward to this law opening the door for more rights for LGBT families. For example, the government would amend the IVF law to remove discrimination against the gay community.

"There will be no compromises on equality. This is a point of principle," he said

He said that after this evening's vote, the debate in committee stage would start tomorrow and the final vote would be held on Wednesday. The government, he said, hoped that all MPs would personally declare their vote when the final vote was taken.