In its second year running, Energy Day at the Malta College of Arts Science and Technology is rapidly becoming an international event for ‘water-energy nexus’ research. Anne Zammit reports on the scientific view of how the Mediterranean may (or may not) cope with climatic changes on the horizon, depending on how policy-makers respond.

Harnessing new links between water and energy by combining them with smart technology to reduce greenhouse gases could help push back the worst effects of impending climate change by 30 years, an energy conference was told.

And generating energy from fossil fuels is starting to be viewed by engineers and researchers worldwide as detrimental to water security, according to Prof. Andreas Kyprianou of the FOSS Research Centre for Sustainable Energy at the University of Cyprus.

The energy conference was hosted on the Malta College for Arts, Science and Technology campus at Paola, where Prof. Costas Papanicolas, senior scientific advisor to the Cyprus government, spoke about the “extreme pressure” of climate change on “already strained electricity and water systems” in Mediterranean countries, the Middle East and North Africa.

“The forecasts are really bleak. There are solutions but there is barely enough time,” he said.

Getting into the 2°C danger zone of temperature rise may not play out uniformly across the globe “but for the Mediterranean and Middle East region it’s bad,” he warned. Crossing the two-degree threshold by 2050 is an optimal scenario based on Intergovernmental Panel on Climate Change (IPCC) data on which the Paris Agreement hinges, but  is “not being followed”, he added.

In what was once known as the Fertile Crescent, countries like Iraq and Syria will become “uninhabitable” if oil-based business-as-usual continues, sparking a much larger migration crisis than seen today.

Duststorms, heatwaves and floods can be expected to become more frequent. “Wet places will become wetter and dry places more dry.” Sustaining life in cities “will not be possible without air-conditioning”.

Prof. Papanicolas explained that a single degree centigrade increase in ambient temperature requires an increase in cooling energy of 14 per cent just to maintain temperature norms.

On how the Mediterranean region could adapt itself for future shortages of water and electricity, he said: “We have the technology but politicians have to be convinced and the public has to use it.”

Prof. Papanicolas, also president of The Cyprus Institute, a non-profit research and education institution with a scientific and technological orientation, advised that for security reasons a range of different technologies was advisable, and they should be distributed in different places. This is where water-energy nexus micro-grids come in useful.

“Along with other institutes around the world we have been pursuing co-generation of water and energy,” he said.

The forecasts are really bleak. There are solutions but there is barely enough time

Two of the presentations described how water can store energy for later use, with two reservoirs at different heights generating electricity as water passes by gravity from one to the other. By day water can be used for irrigation. Energy generated by its flow can power water pumps to return the water to the upper reservoir and provide more energy for lighting at night.

Energy can also be stored in the refrigeration units of thermal electric power plants to be harnessed when needed.

Science and technology offer solutions to get the best out of combining water and energy processes, according to Prof. Antonio Espirito Santo, coordinator of the Energy Water System Integration and Management (EDGEWISE) consortium.

Integrated management of energy and water systems can mix renewable energy sources with new smart sensing networks. Interaction between these different spheres of knowledge has wide implications for the economy, society and ecosystems.

Smart sensors allow researchers to develop new ways of monitoring to find the best efficiency in interactions between water and energy. Yet the operation and effectiveness of these sensors is itself reliant on the availability of more energy.

Harvesting energy from water systems makes it possible to power smart sensors, avoiding the disadvantages of battery use. Inducing vibrations in water distribution pipes produces a type of energy which can be converted into electrical energy. Microbes acting on wastewater can also produce electrical energy.

The need for interconnection of sensors over a wide geographic area to identify, capture and relay data for energy and water management has led to development of a specific ISO standard for this purpose.

Other presentations at the conference dealt with solar electricity and water use in Maltese households using smart systems with integration of PV panels and electric vehicles into electricity grids. 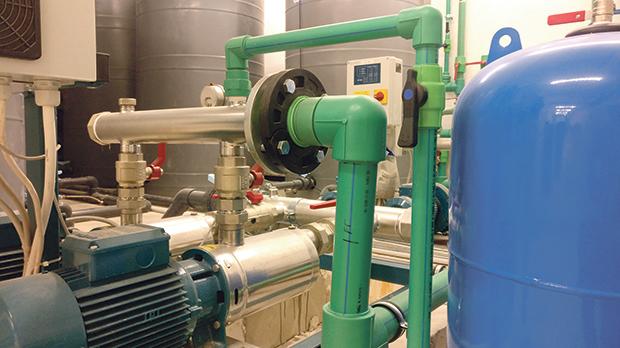 Pump room in a ‘living laboratory’, part of the new infrastructure at the college in liaison with the Estates and Capital Projects Department at Mcast. This photo: Brian Azzopardi

A keynote lecture on low-carbon transition pathways was delivered by Prof. Joe Ravetz from The University of Manchester. Charles Buttigieg from the Energy and Water Agency spoke on creating a market for sustainable economic growth.

This year’s Mcast Energy series was partly supported by the Malta Council for Science and Technology Internationalisation Award 2017 and an ERANETMED initiative under the EDGEWISE project.

Brian Azzopardi,   principal investigator of the Mcast Energy Research Group, is wasting no time in preparing for the next Energy Day conference in 2019.

Topics to be covered next year will include the PEARL PV (Performance and Reliability of Photovoltaic Systems: Evaluations of Large-Scale Monitoring Data COST Action) project to improve photovoltaic energy systems in Europe, leading to lower costs of electricity and a longer life time for solar panels.

Plans are taking shape for Mcast to become a ‘living laboratory’ as a micro-grid, generating and managing its own energy sources and demands. The long-term vision is a 3D-MicroGrid project to design, develop and demonstrate a smart micro grid in operation on the campus.