The parliamentary secretary responsible for citizenship on Wednesday denied that a man described as having blown the whistle on an Algeria visas scam had been singled out for revocation of his Maltese citizenship.

Replying in parliament to remarks made on Tuesday by Jason Azzopardi, Julia Farrugia Portelli said the Nationalist MP had been very selective and misleading in his remarks.

While Dr Azzopardi had claimed that Mr Fezouine could not have his citizenship revoked for vitiated consent of his marriage, Mr Fezouine had actually been found by a court several years ago to have married a Maltese woman solely for the purpose of attaining Maltese citizenship. This amounted to marriage of convenience, which was a valid reason for citizenship to be revoked, she explained. 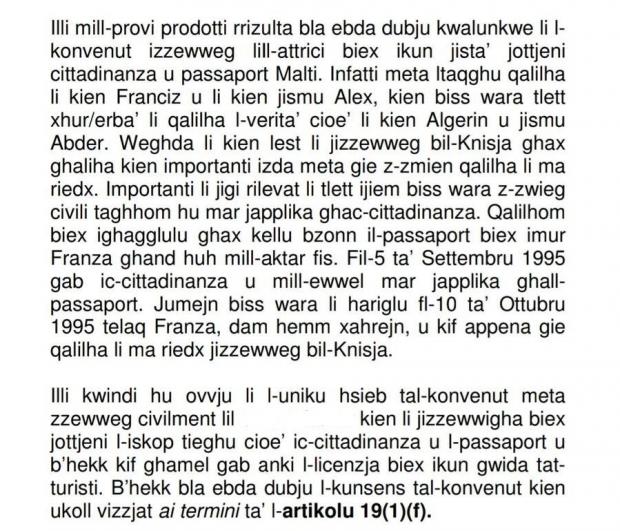 The court judgement quoted by the parliamentary secretary. The name of the Maltese woman involved in the 'marriage of convenience' has been removed.

Mr Farrugia Portelli said a simple Google search of court records was enough to show how Dr Azzopardi was incorrect.

A court had found Mr Fezouine had initially told his then partner he was French not Algerian. Three days after he was married, he applied for citizenship and asked authorities to rush the application so that he could visit his brother. The court concluded he had married the woman solely for purposes of acquiring citizenship.

Why had Dr Azzopardi ignored what the court had declared, she asked.

She also noted a document dated from 2006 - when the Nationalist Party was in government - where Mr Fezouine was listed among people found to have a marriage of convenience. "Why did the government not act at the time," she asked.

The present government, she said, was simply rectifying the situation.

Ms Farrugia Portelli also pointed out that while Mr Fezouine was being described as a whistleblower, he never followed the procedures laid down under the Whistleblowers Act.

Perhaps, she said, Dr Azzopardi could have spoken more about his history, such as the way he had been employed by a Nationalist MP, and why he was no longer in employment.