"Hi, this is the army: you're going to have to quarantine."

This is the message a Spaniard might now hear over the phone from the country's military personnel freshly recruited to track and trace those exposed to the virus in the European Union's worst-hit country.

At the headquarters of Spain's armed forces in central Madrid is a room with a sign on the door reading "Epidemiological surveillance department".

Inside, a team of around a dozen people, headsets on, are working 12 hours a day, seven days a week, each making between 70 and 80 daily calls to identify those who've been in touch with someone who's tested positive for COVID.

"I'm a contact tracer for the region of Madrid, I got your number from someone who has tested positive. Firstly, where are you right now?" says one, using a phrase that will be repeated throughout the day.

"You need to observe 10 days of quarantine."

Tasked by the government with helping the worst-hit regions, more than 2,000 troops from different branches of the military are engaged with the painstaking work of tracking down the chain of contamination in a bid to slow the spread of COVID-19.

Many have blamed the lack of contact tracing as a key reason for the surge in numbers in Spain where some 760,000 people have been infected and nearly 32,000 have died.

It is an arduous task which involves phoning up every single person who might be infected, and could be passing on the virus.

Sometimes it may mean meeting to carry out a test but the main thing is to convince them to immediately isolate themselves from everyone around them.

The idea is to ease the pressure on the Madrid region's healthcare system, which is already struggling under the weight of new COVID cases, explains commander Tomas Garcia, who is also a nurse, adding it is "to give the doctors more time".

On a rainy morning in October, nine navy personnel are sitting at their desks behind a plexiglass panel, speaking softly into the phone while taking notes on a computer. 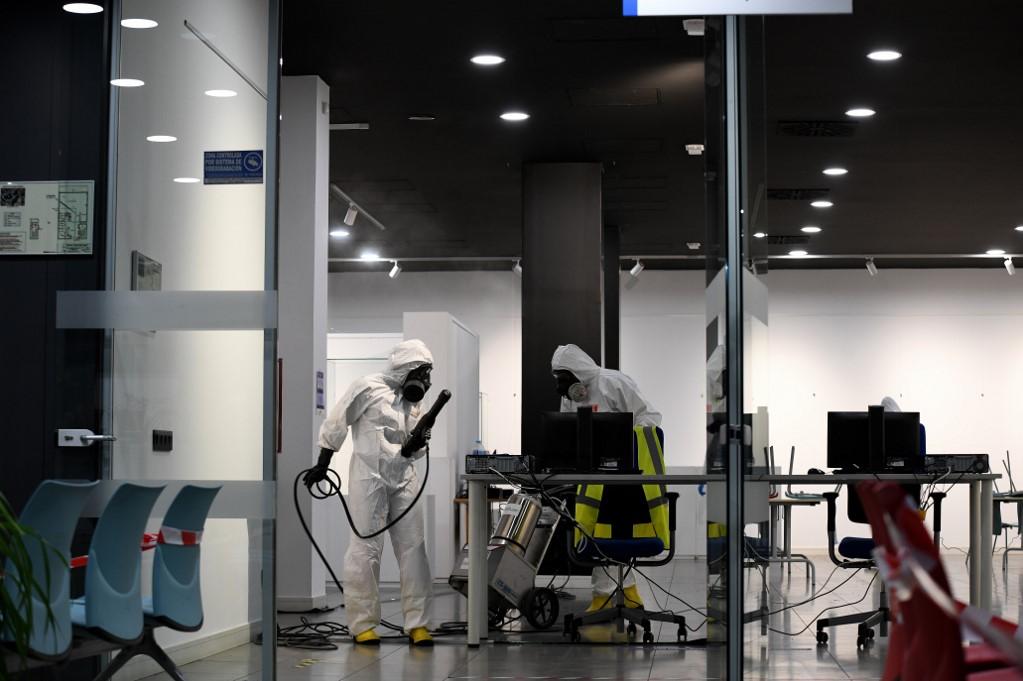 Drafted in just two weeks ago, they have been ringing round all the contacts provided by individuals who have tested positive, with the list of numbers provided by the regional health authorities.

The aim is to see who they have been in touch with to build a so-called "map of infections".

But guaranteeing the anonymity of the person who has tested positive while reaching out to all the people they have been in touch with is a fine balancing act.

In general, there are only "two or three contacts, although sometimes it's seven" and in some cases many more as was the case with one teacher, and another who worked for a fast-food company.

"No, no, no - he can't go to school because his sister has tested positive," insists one in a low voice, the tone muted for most of the conversations.

"You must disinfect the bathroom really well if you share it with your husband," says another.

Sometimes the situation requires an extra level of tact and sensitivity, with one gently saying: "It's not your fault. You mustn't see it like that, don't give it another thought."

For Corporal Rafael Medel, telling someone they might have COVID-19 requires a degree of sensitivity.

Even worse are those who ignore the calls or refuse to cooperate.

"If it's someone who is a close relative who hangs up because that person is in hospital, or has died, it gets complicated," he says.

Earlier this year, there was the well-publicised case of a funeral which turned into a viral time bomb, when all 20 people there got infected, he recalls, saying it required several people to track down all their contacts.

"There are also moments when you call someone and they just want to get everything off their chest, isolated older people who live alone," says Medel.

After one such call, the tracer hung up remarking: "She reminded me of my grandmother."

For those on the team, the main thing is "to listen" and to "be gentle" with people, he says.

"Each one has their own style, their own personal touch," says Sergeant Ana Castillo, who runs the operation.

As to how much longer they will be doing the job, no-one knows.

"As long as it takes," the defence ministry said.