Ever since I discovered showgirl Dita von Teese’s classy seduction routine, played to the tune of sultry music, feathered boas and teasing dance routines, I have been a fan of burlesque. Burlesque dancers are certainly enchanting creatures.

Beautiful, yet somehow very real and far removed from the improbable beauty of, say, catwalk models. Their performance art is often described as “the tease without the sleaze” and recently started enjoying a world-wide revival. 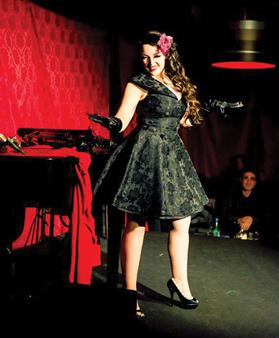 However, it is certainly not an art that I expected to find performed in Malta. Enter Undine LaVerve, the bubbly and charming performer who has taken it upon herself to introduce our island to the mysteries of burlesque. Not that there is much mystery about the intentions behind these shows.

Burlesque performances are all about having fun, about creating a make-believe world full of beauty and humour. What they are not about, contrary to popular misconception, is giving a strip act.

Still, when I learnt that a series of burlesque shows are taking place on a monthly basis in Malta, I was both surprised and sceptical. Would the show measure up to the real deal? I had high hopes it would – I was already acquainted with LaVerve’s work having seen her perform at another couple of events and knowing that she has already left a mark on the international burl-esque circuit, gaining good reviews at several festivals, such as Paris’s Pretty Propaganda, Amsterdam’s Fringe Festival and the Munich Burlesque Festival.

The shows, which take place every last Saturday of the month at Melita Gardens in Balzan, are dubbed Burlesque à LaVerve and typically offer a couple of hours of live jazz, singing, comedy and burlesque. 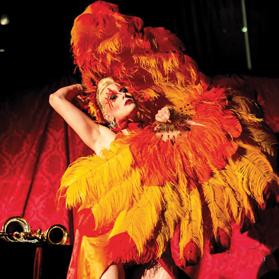 For the evening, the space at Melita Gardens was transformed into a cabaret-style, intimate venue, with tables placed around the stage.

The evening started with some light musical numbers, followed by some golden oldies by Wolswijk, before LaVerve kicked off the first burlesque act, Sailor Girl, a classic number that showed off the dancer’s playful nature to best effect.

With fast-paced choreography and contortions aplenty, this act was the perfect opener to introduce the audience to the nature of burlesque and to ease the audience into the spirit of the evening.

LaVerve is blessed not only with technical prowess but also with incredibly emotive facial expressions and a very infectious sense of fun that give an extra oomph to her performances.

A wink here, a cocked eyebrow there, a finger wiggling teasingly... she reels her audience in expertly, seducing as much with her devastating charisma as she does with some very tight technical moves.

Her second burlesque number for the night, the award-winning Lavender Dream, proved equally mesmerising – more edgy than the first act, it transformed LaVerve into a flurry of feathers and fun in one sensuous package.

She reels her audience in expertly, seducing as much with her devastating charisma as she does with some very tight technical moves

Constantly maintaining eye-contact with the audience, she performed to whoops of delight from everyone present (yes, it’s that kind of show, which is also what makes it fun).

Shimmying confidently on stage, she somehow makes it all look deceptively easy, almost as though seduction and dance are her default setting.

LaVerve also gave us a taste of political burlesque on the night, a satirical interpretation of cor-poration greed that dominates today’s society.

Although the genre is not as popular as classical or dramatic burlesque, it is rapidly gaining ground and turned out to be a very intriguing way to make a strong social statement using performance art.

Mis Red’s acts were equally well-received. The performer has won multiple title and awards at a number of international festivals.

She is also the co-producer of the New Zealand Burlesque Festival. Her arrival on stage was greeted with much excitement by those who were already in the know.

As expected, her numbers were the epitome of showbiz, in particular her last act, Rise from the Ashes, which closed the show pretty spectacularly.

Borg’s husky voice comes straight out of classic cabaret, perfectly in keeping with the spirit of the evening, while Dogum’s numbers, especially the belly dance, kept everyone entertained. Philip Leone-Ganado acquitted himself extremely well both times he took the spotlight, with some local gems that were appropriately inappropriate in the best tradition of stand-up comedy.

Leone-Ganado scored on all counts, alternating between barbs at some hapless member of the audience and endearing self-deprecation, running a wide gamut of universal topics and light current affair and even managing to get vocal reactions from his audience (amusingly, his GermanWings joke drew groans and shouts of “too soon”).

Some local gems had the Maltese among the audience in titters and, upon seeing that the audience included a sizeable number of foreign guests, Leone-Ganado deftly adapted his repertoire accordingly – kudos for the quick thinking.

The evening would certainly not have proceeded as smoothly without the witty (and sometimes raucous, but no one was complaining) input of Fitz as host for the night. With some charming banter here and a bit of smooth flirting there, he had the audience in the palm of his hand.

The next editions of Burlesque à la Verve take place on Saturday (featuring New York City’s Peekaboo Pointe as special guest star) and on May 30 (featuring another US performer, Kat de Lac) at Melita Gardens, Balzan. Tickets are available by calling on 2147 0663.