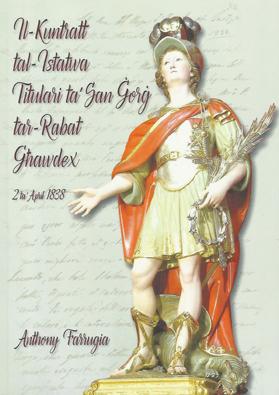 Il-Kuntratt tal-Istatwa Titulari ta’ San Ġorġ tar-Rabat, Għawdex, 2 ta’ April 1838 (The Contract of the Titular Statue of St George of Rabat, Gozo, April 2 1838) is the name of a new publication by Gozitan accountant and public auditor Anthony Farrugia. His name is not new to those who have Gozo’s history at heart, but this may be considered his own first published book.

Through the book he is presenting to the general public his discovery of a very important document within the context of mid-19th-century Gozo: the contract for the statue of St George, revered in the basilica dedicated to him in Rabat, Gozo.

In 2014 the parish-basilica of St George of Victoria celebrated the 175th anniversary of the statue, sculpted in wood in Cospicua by Maltese sculptor Pietro Paolo Azzopardi, a student of the renowned Mariano Gerada. Azzopardi later also sculpted the statue of St John the Baptist for the Xewkija parish church, which arrived in Gozo in 1845. So his name is attached to Gozo in a historical and no less romantic fashion.

Both statues are of singular artistic beauty.

In this book of his, Farrugia meticulously traces the origins of the statue, which has become quite an iconic figure within the religious imagination of the people of the island. The young writer seems to be fascinated by genealogy, the ancient art of family-tree making; in fact at the end of the book, the reader will find no less than six detailed genealogical figures.

What makes it more interesting is the fact that the author himself features in one of them; the bond of the author with the statue is quite distant but no less real. Genealogy is fascinating inasmuch as it provides such a strong link with the past; it quietly speaks of roots that are not to be easily cut or broken.

The biographical information about archpriest Dun Fortunato Cutajar, the archpriest of the Gozo Matrice and therefore parish priest of Rabat and its ancient parish of St George, makes for interesting reading; it also paves the way for a better understanding of the milieu in which the statue of St George was commissioned, sculpted and later arrived in Gozo’s hub.

Nepotism must have been the order of the day, even in the local Church, because the parish priest had other priests of influence in his own family.

The cholera of 1837 played an important role in Gozo’s historiography before the arrival of the statue itself. The statue of St George is then presented as the fruit of a dream, a dream dreamt and rendered real by archpriest Cutajar himself, who is the prime protagonist on the scene of action.

The importance of the book can hardly be under-estimated, given the fact that Farrugia provides us with the original contract that mentions the titular statue of St George, a contract that forms part of the notarial acts of Notary Nicolo Tabone, a direct forebear of both former President of the Republic Ċensu Tabone and former Speaker of the House of Representatives Anton Tabone, both of Victoria. So much had been written before the document’s discovery, and I would conclude that there were few who were still hoping that such a document would come to light. Less than two centuries after the commissioning of the statue, the public is presented with the document written in archaic but readable Italian and included in the publication itself.

From a parochial point of view Farrugia is a hero. From a national perspective he is to be commended for his service and for his contribution, a feat which will not easily be forgotten, given the fact that the martyr saint of Lydda is still very much revered and identified with, hundreds of years after the Christ-ian Byzantines introduced his cult to the Maltese islands.

I recommend the book to those who in a post-Christian society defiantly classify themselves as Ġorġjani, and to all those who still cherish the history of our country.

May our past serve us well in our search for a better future!