On the occasion of the feast of the shipwreck of the Apostle St Paul on the shores   of Malta in AD60, which the Catholic Church in Malta is celebrating tomorrow. 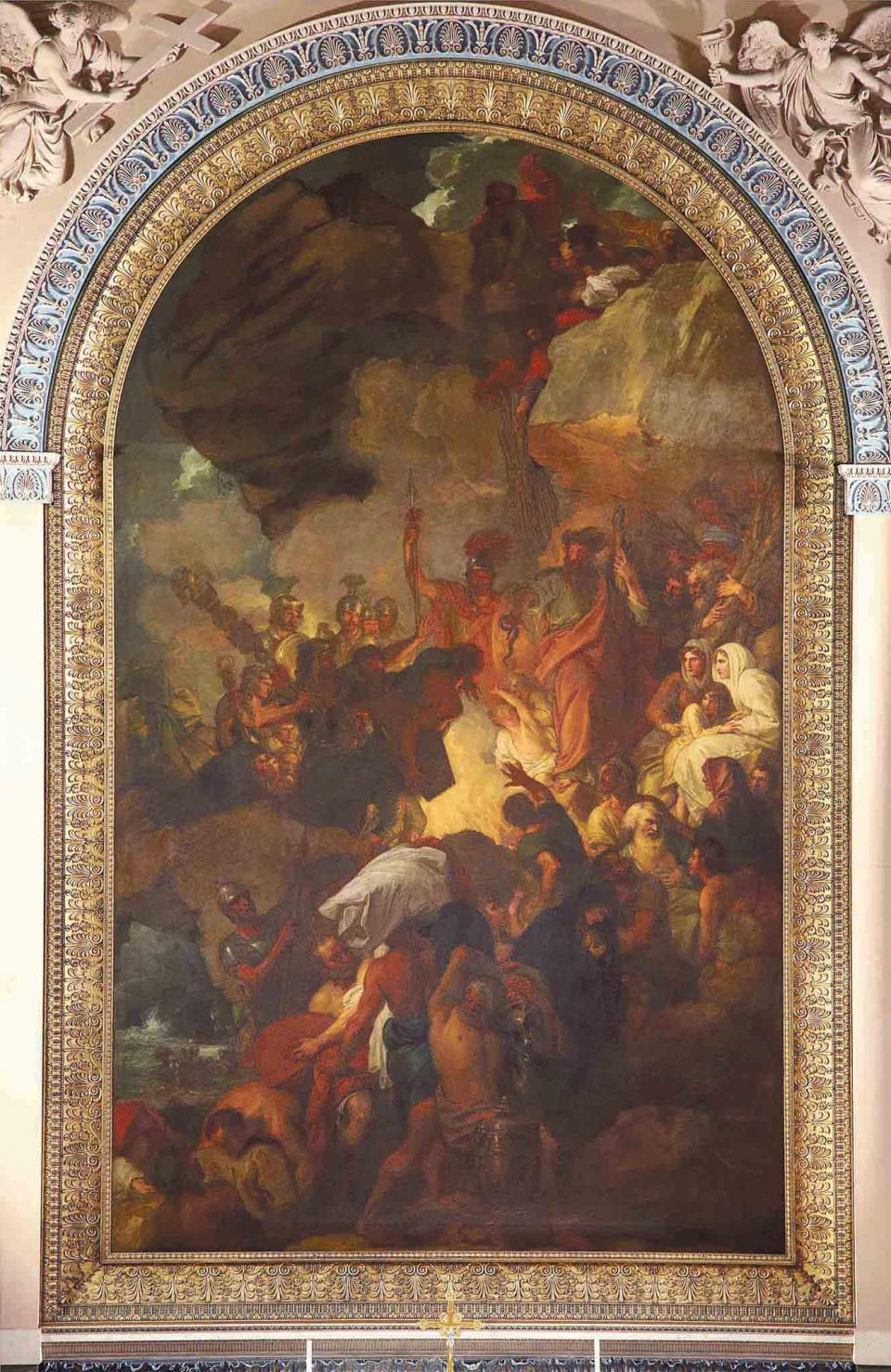 St Paul and the Viper by Benjamin West – the altarpiece in the Chapel of Saints Peter and Paul, in the Old Royal Naval College at Greenwich, UK. Courtesy of Deborah Robson, chapel manager.

Among the art treasures in the Tate, in London, there is a painting in oil, on canvas, measuring 1,295mm by 724mm, depicting St Paul shaking off a viper from his right hand, surrounded by several people around a fire, soon after they were shipwrecked on the shores of the island of Malta [Acts of the Apostles, 28: 5]. Originally, this was a sketch for a much larger painting, to be placed on the main altar of the chapel in the original hospital for retired Royal Navy sailors, in Greenwich, England. Both paintings were executed by the American painter Benjamin West.

An etching reproducing this painting was made by Italian Francesco Bartolozzi.

West was born on October 10, 1738, in Pennsylvania, the US. He studied painting in Philadelphia in 1756, and in 1760 sailed for Italy where he visited the most important cities. In 1763 he went to London, where he worked as a portrait painter and later gained King George III’s patronage, which lasted until 1801. He was a founder of the Royal Academy (1768), of which he was elected president in 1792. 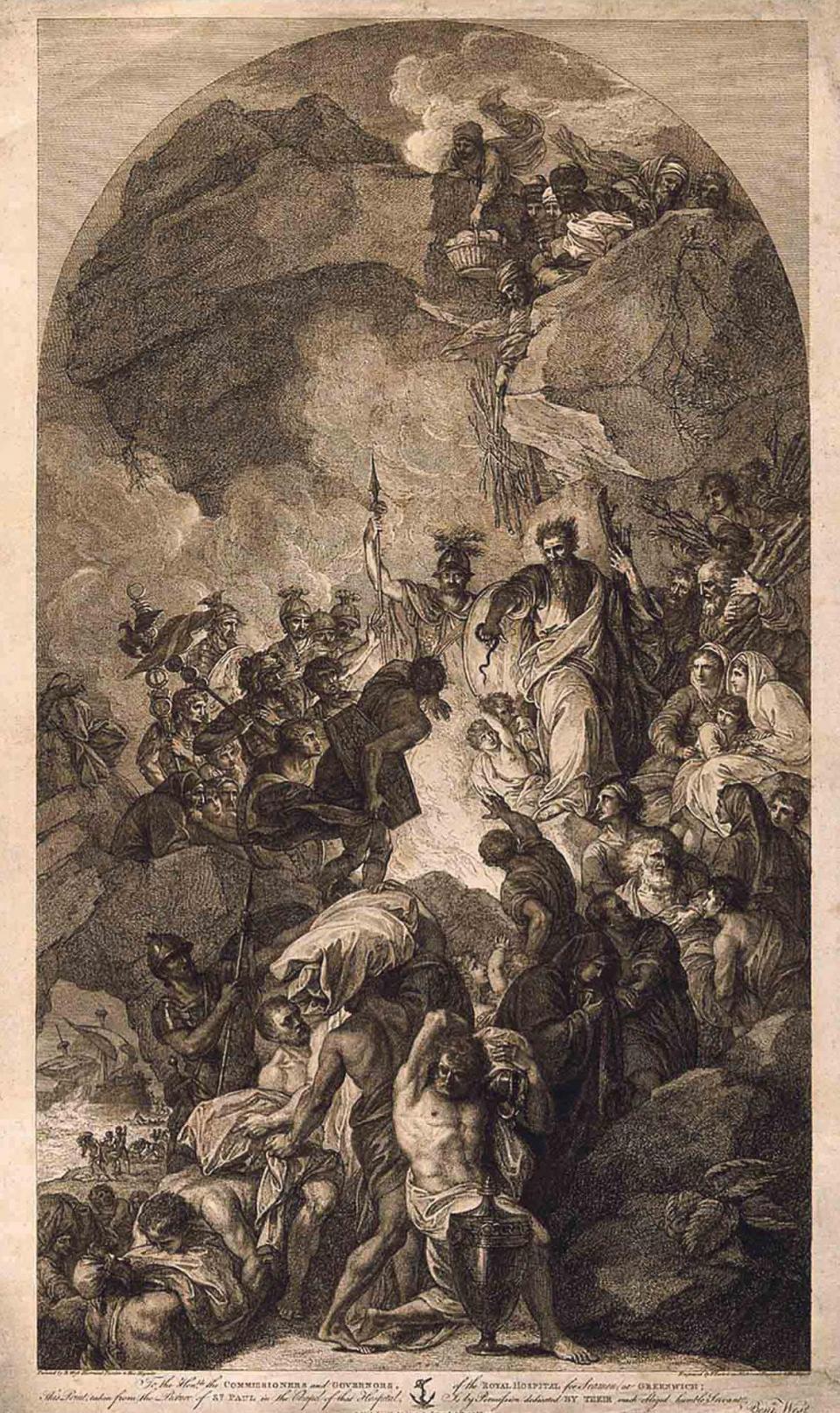 Eventually he established himself as a painter of historical, religious, and mythological subjects. He won popularity especially with his The Death of General Wolfe. In 1802 he visited Paris and exhibited his final sketch for the Death on the Pale Horse, which anticipated developments in French Romantic painting.

A very notable building in the college is the chapel dedicated to St Peter and St Paul, both of whom had connections with the sea.

The chapel was originally design­ed by Baroque English architect Sir Christopher Wren and built by Thomas Ripley in 1751. However, in January 1779 it was destroyed by a devastating fire. The present chapel was designed by James ‘Athenian’ Stuart, in a neoclassical Greek revival style. 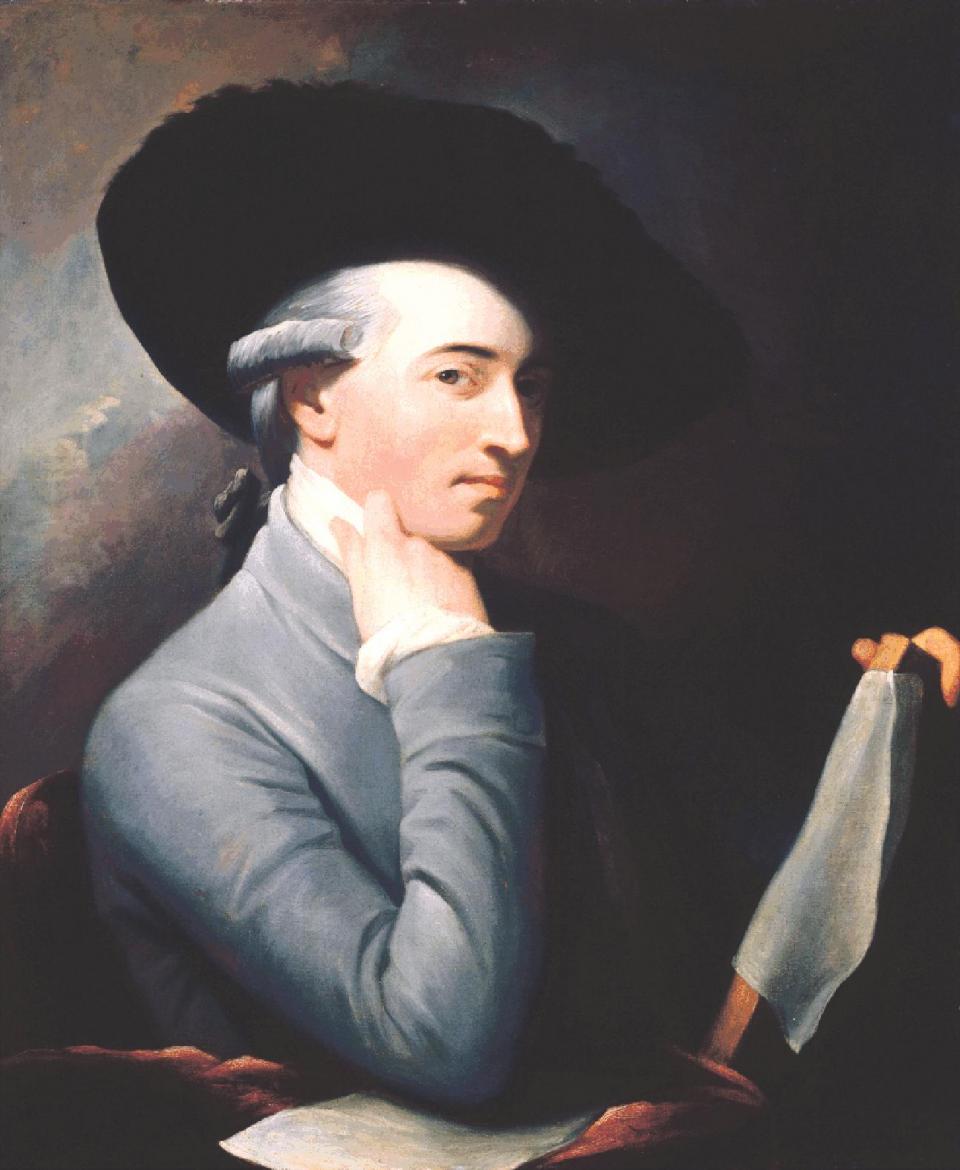 The great altar painting in this chapel depicts an episode from the story of St Paul’s shipwreck on the island of Malta and his miraculous survival from a viper’s bite. The painting was commissioned to West in 1785 and was completed by autumn 1789.

West took the narrative from the life of St Paul – the principal saint in the Anglican Church, as St Peter is in the Catholic Church – directly from the Bible [Acts of the Apostles 28: 1-6].

Paul, who was arrested and accused by the Jews in Jerusalem for bringing gentiles into the Temple, was taken in front of the Governor of Cesarea, Felix, and was imprisoned for two years. Paul appealed to Caesar and, consequently, together with other prisoners, was put on a ship sailing to Rome, where he would be judged as a Roman citizen.

As soon as the vessel started on its voyage it encountered bad weather. Paul advised against proceeding with the journey, in vain. No sooner had the ship passed Crete than it was caught in strong winds that began to control its direction and, eventually, all aboard were at the mercy of the sea. After two weeks in extreme North East winds and rough, heavy seas, the ship ran aground on the shores of Malta.

West sought to achieve a transcendent message: Paul and the men who were with him survive a horrifying tempest at sea, setting an example of hope… for men with faith in God 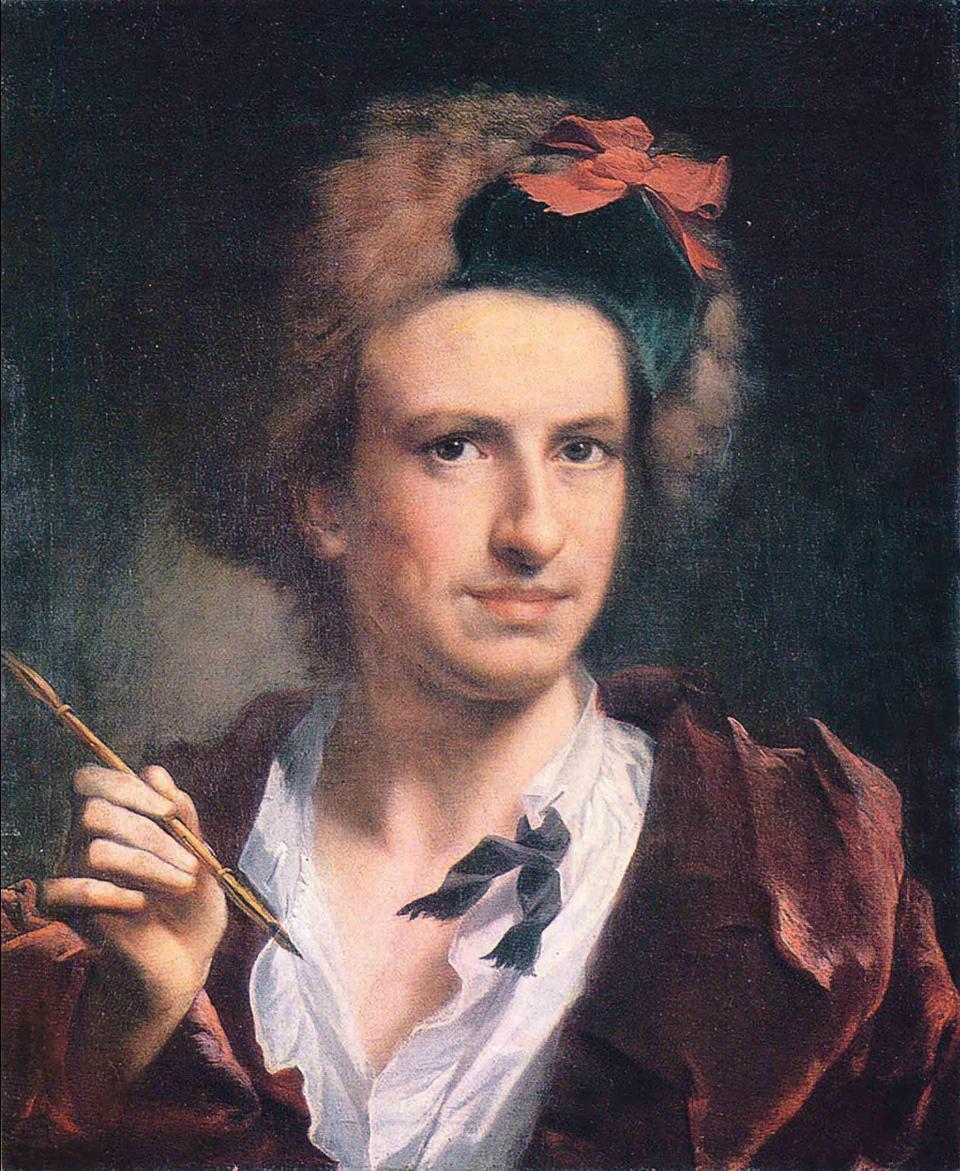 The weather was cold. It was raining. The inhabitants built a large fire around which Paul and the other shipwreck survivors gathered to dry and warm themselves. The inhabitants helped as much as they could and looked on at the evolving scenario.

As Paul was handling a bundle of branches to be thrown in the fire, a viper leapt out and stuck to his hand. Paul shook it off and outlived the natives’ fear that he would die poisoned, and began to believe he was a god.

It is this moment in the narrative that fills the painting in the Greenwich chapel, with a dramatic depiction: Paul shaking the viper off his hand.

The sketch in the Tate – which was exhibited as a modello at the Royal Academy’s yearly show – is one of a few prepared for the final painting, which aimed to provide hope for the naval pensioners who were spending their last days in the hospital, after a life of hardship and danger at sea.

It corresponds very closely to the finished painting in the chapel at Greenwich, with only minute differences.

The painting in the chapel is around 7.62 metres high by 4.27 metres wide. It was executed predominantly in chiaroscuro style, reminiscent of a Caravaggio or Rubens painting. It is filled with some 50 figures. The central figure is Paul, standing with his weight on his left leg and his right knee bent, with a foot resting on a rock. His right hand is extended out and down with the viper around it. His red robe is long and full of drapery folds. The firelight radiating on his face reveals courage, serenity, assurance, and strength.

The chapel in the Old Royal Naval College at Greenwich, dedicated to saints Peter and Paul.

Paul stands out among a group of people who include women, men, children, and Roman soldiers – everyone looking on, frightened and bewildered by the unfolding dramatic event created by the viper.

The Roman Centurion responsible for Paul and the other prisoners, on the left of Paul, is quite recognisable; he wears a corset, a red cloak over his shoulder, and a helmet with a red plume on the top. He is carrying an oval shield in one hand and a spear/lance in the other. Beside him stand other uniformed soldiers, two of whom are standard bearers.

The scene of the activity takes place in the shelter of high enormous rocks.

Beside the dark sky at the top of the painting, on the rocks, some men – perhaps inhabitants – look down at the theatre of commotion; one of the men is trying to lower down a bundle of sticks.

Below the central stage – which is highlighted by the glow of the fire in the very middle of the whole painting – the scenario is full of movement.

In the lower left-hand side there is a glimpse of the shipwrecked vessel, while more muscled men walk towards the shore, carrying wood from the wreck. Among other figures, an elegant (Roman?), darkly dressed woman is holding to her bosom an urn, perhaps containing ashes of a dear one.

It has been suggested that some men in this area have faces which may be portraits of West’s two sons and friends.

Francesco Bartolozzi was born in Florence on September 21, 1727, and died in Lisbon on March 7, 1815. He was an accomplished Italian engraver, whose most productive period was spent in London, where he also worked for King George III, like West.

It was some time after the painting in the chapel at Greenwich was finished that West made arrangements with Bartolozzi to produce an etching of the painting, a copy of which is in possession of the Wellcome Collection, in London.

Beneath this engraving – which is extremely faithful to West’s painting, and measures 880mm by 410mm – the names of both the engraver and the artist from whose painting it was inspired, are acknowledged. Besides, the engraving was dedicated to the “Honourable the Commissioner and Governors of the Royal Hospital for Seamen, at Greenwich”.

It is recorded that West was pleased with the finished product, for which he was paid £1,200. After being hung in place, the artist asked for a scaffold in order to put the finishing touches which would harmonise the painting with the prevailing light. However, unfortunately, the picture has darkened considerably by time, even though it has been repeatedly cleaned.

Notwithstanding, St Paul and the viper is an impressive work of art. As an art critic aptly said, it “evokes an emotional response, the sublime, by the enormous spectacle of the power of nature, the possibility of destruction and, dramatically, the power of the Christian Faith”. In it, West sought to achieve a transcendent message: Paul and the men were with him survive a horrifying tempest at sea, setting an example of hope for convalescing retired seamen in the hospital, but, above all hope for men with faith in God.

Acknowledgement
Some material for this article has been sourced from Old Royal Naval College – Greenwich – Souvenir Guide by John Bold and Peter Smith, Norwich, England, 2016.