The Ministry of Transport made history in South Africa in 2017 when one of its employees Rowan Joachim became the first firewoman at The Stars of Sandstone heavy metal festival.

“My friends at the Welshpool and Llanfair Light Railway suggested I would enjoy ‘Stars’ and it would be good for me to fire locos in a different country. So I went shovelling in South Africa!

“I was nervous but had a wonderful time; I met some amazing enginemen from all over the world who love all things mechani­cal and steam. I fell in love with the Kalahari – the NG15 and Ng11!”

Brought up in Acton, west London, Joachim used to work for London Underground and has now moved to the RAIB. 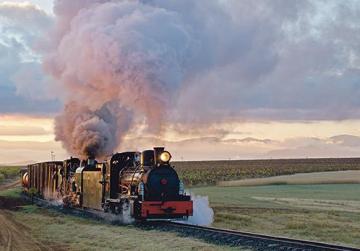 “I can’t think of anywhere else where you can take a ride on a steam hauled train, take a flight in a vintage aircraft, experience all ages of farming equipment in action from oxen to modern-day diggers and tractors. I can’t wait to go back.”

The ‘Blue Train’ gets all the glory. But now one of the world’s most iconic trains is pulling its weight to push some of its ancestors back into the international spotlight.

The world’s ‘gricers’ and ‘ferro-equinologists’ are in for a rare treat.

The famous train, which in 1923 began taking passengers from Johannesburg to Cape Town to catch ships to England, and became ‘Blue’ in 1937, has been especially chartered for the Stars of Sandstone heri­tage transport rally being staged between April 4 and 14, 2019.

For the first time it will deliver rail enthusiasts from Pretoria up to the Eastern Cape Province so they can chug around the Maluti mountains along a private railway where “the mountains meet the stars”.

And travel on the night-time ‘Stargazer’. As well as enjoy a trip through the cosmos.

Or fields of cosmos and sunflowers.

Sandstone Estates, located on the border with the sovereign State of Lesotho, is the home of South African transport preservation. The farm was built up by German missionaries in the 1830s. It is still an organic wheat, soya bean, maize and sunflower farm. It also breeds Afrikaans oxen as used by the Voortrekkers.

But it is also the site of a unique 30-kilometre private railway, originally set up to rescue trains from the Midmar Museum in KwaZul-Natal.

Sandstone now boasts 30 locomotives on site with their own  unique 610mm narrow gauge railway running from Grootdraai to Hoekfontein and  onwards via Mooihoek to Vailima Sidings at Ficksburg. The line passes the 2.48km-long Game Dam extension (‘Seb’s Railway’) named after the Sandstone Heri­tage Trust’s founder’s grandson and dedicated to the smaller locomotives, like the German-built 1930s O&K rescued from the Fazenda Sugar estate in Caxito, Angola.

The main track takes in a one-in-44 climb, a 180-degree turn at Blue Gum Curve, and old fruit farmlands. The highest point is 1,644m above sea level.

The line was largely made from track from Lesotho’s now defunct Majestic Highlands water scheme railway serving the Khatse Dam.

Passing through Westminster and Versailles, the 330km Bloemfontein-Bethlehem line, as with many in South Africa, was built to serve the agricultural sector. Like the 285km, 1906 Apple Express from Port Elizabeth to Avontuur, it was considered one of the most scenic in the world. Usage declined in the 1990s due to deregulated road haulage. Sandstone was given three weeks to clear the entire system and relocate to Hoekfontein.

“It was a train set in pieces,” says operations manager Dave Richardson. “A short section was built to run one locomotive from Midmar. The line was extended first to Mooihoek in 1999 and then to Grootdraai in 2001. The first public trains ran in 1999. By 2005 it was all done. It’s truly a piece of exciting engineering and construction.

“The railway was built by Sandstone staff with input from a number rail infrastructure people. The hardest part was from Vailima on the loop around the mountain with the steep gradients and also a lot of bedrock close to the surface which we had to avoid. Hence some of the steep gradients were forced upon us. There was no blasting involved.” 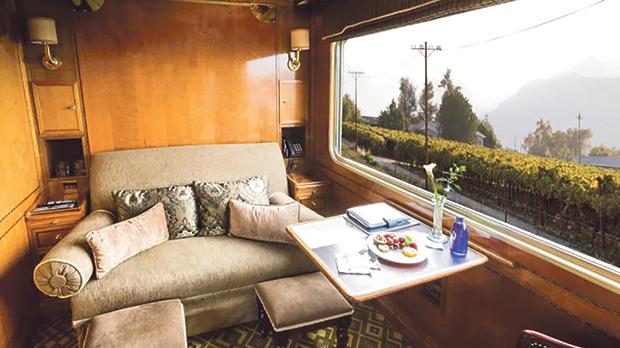 One ‘Star of Sandstone’ was hauled out of the bush on a Mozambican sugar estate, taken by barge down the Zambezi, put on a coaster at Beira and, once in Durban, taken by flatbed truck to stand in the same shed at Sandstone as more celebrated Hunslet-Taylors and Kerr Stuart locomotives. The collection’s Lawley’s pre-date the birth of Rhodesia and were used on the Umtali-Beira route.

The narrow gauge rolling stock is one of the biggest in the world. Sandstone Heritage Trust operates a major locomotive refurbishment programme at its Bloemfontein workshops, based in the old steam depot.

Other locomotives come from  South African gold mines and sugar estates in Mozambique as well as Angola. One dates to 1899. ‘Josefina’ is named after the Angolan ambassador to South Africa. Some belonged to collector and trust director Wilfred Mole, who left home empty-handed and came back with 35,000 tonnes of machinery!

Four of the site’s SAR trains are the largest locomotives ever to run on two-foot narrow gauge anywhere in the world. Similar South African locomotives can be found on the Welsh Highland Railway in the UK.

The estate’s wagon collection is representative of every type that worked in South Africa, from open goods wagons to closed vans for carrying cattle or fruit and tanker wagons for creosote, fuel or water.

“The majority of our coaches are conversions from goods vans which we do ourselves,” adds Richardson. The Stargazer was conceived for passengers who want have a run behind steam at night. We’ll stop in the Caledon River valley to admire the night sky.

“We are a private collection of heritage on a commercial farm. And a heavy metal festival too!”

Stars of Sandstone is the premier heri­tage festival in the southern hemisphere. The Blue Train is exclusive and limited to 52 passengers. Two days at the festival are included in the four-day excursion. Bookings are now being taken. 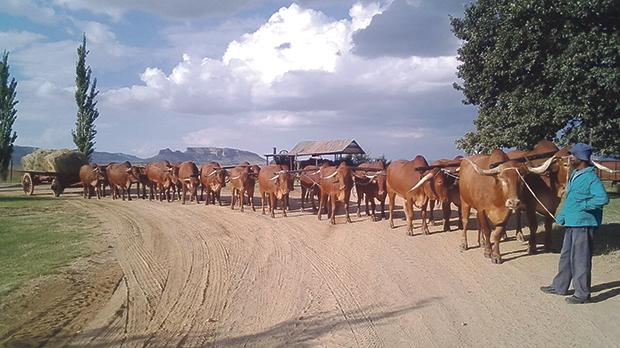 Richardson adds: “The Blue Train will be taking a slow ride, 13-and-a-half hours on the way down, from 9am to 10.30pm, so a nice ride in daylight. On the return, overnight departure is at 6pm to arrive at 10am, so 16 hours, but in darkness, with all meals served while moving. A leisurely return. The route is about 450km.

“The train will be staged at a siding at Vailima next to our two-foot narrow gauge line where each day  passengers will have their own train to take them to the events.”

As well as fly-bys and plane flip trips provided by The Harvard Club (many based at Swartkops near Pretoria) and the presence of the Model A Club of South Africa, also showcased will be elderly caterpillars, old buses, crank handle cars like the 1920s Hupmobile, 1901 crane locos, 1904 traction engines, Wolseley engine, antique tractors and combine harvesters, cable and pipe trenchers, military armoured vehicles like Sherman MK IV tanks (from the South African Armour Museum in Bloemfontein), dump trucks and other vintage earth-moving vehicles.

Many of the machines are still used for hauling compost, gravel and transporting the harvest.

“Sandstone’s unique,” says Richardson. “England has 72 narrow gauge railways. But we don’t have any. Except this line maintained by preservationists. There are steam and heri­tage transport rallies but none with their own private track. Heritage projects can only survive if people support them.

“We have train drivers, firemen and crew coming from all around the world to get up onto the plate and drive the engines. Our motto is ‘Saving the best part of the past for the future’.

Says former Belgian fireman Niels Winklemans: “We had so much fun up on the plate out on the line.”

Steam brings tears to many eyes. Winklemans driver was George Shields. They drove a Falcon and a Beyer-Peacock together. Shields thinks they put on a good show.

“Whether you’re a volunteer, ex-train staff or a photographer, you’ll undoubtedly reap a bountiful harvest!” 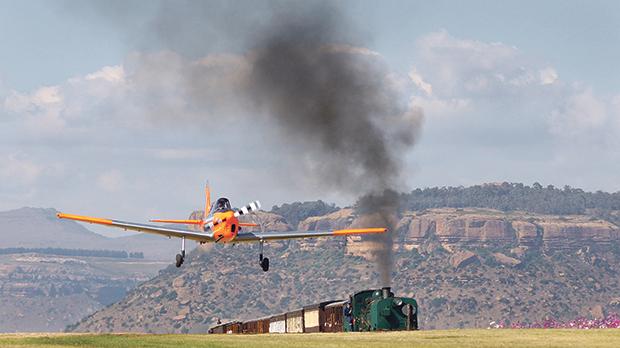 • Tours that include return coach transfers from Johannesburg’s or Tambo Airport, accommodation near Sandstone, local transfers and Sandstone entry start at $1,564 for five days, $1,974 for six days and $3,387 for 10 days.

• Geoff’s Trains Ltd, a British specialist railtour operator, is the exclusive international sales agent for the festival. More information can be found on their website at www.geoffs-trains.com.

• For more information on the Stars of Sandstone 2019 Steam and Heritage Festival, go to www.starsofsandstone.com and watch the 2017 edition at https://youtu.be/937ZkuLyj7w .