State officials responsible for the rights and welfare of migrants have requested access to the three Captain Morgan ships holding hundreds of rescued people offshore.

A source in the Agency for the Welfare of Asylum Seekers, which manages reception facilities in Malta, said the request had not yet been given the go-ahead, almost a month after the first boat moored.

It comes amid conflicting reports about life on board the Baħari, Atlantis and Europa II, moored at Hurds Bank, around 13 nautical miles offshore.

Last week the NGO Alarm Phone claimed some of the almost 300 migrants were distressed and on hunger strike, while brief undated videos leaked to journalists purport to show them laughing and singing on board.

The AWAS source said the lack of access could raise suspicions that the government feared a damning assessment of the conditions on board the boats, usually used for day cruises to popular tourist sites.

Times of Malta has also requested access to the boats and to interview the passengers and has been unable to independently verify the videos.

One of the videos leaked to journalists show migrants dance on board one of the Captain Morgan boats.

A senior government official familiar with the situation, however, defended the situation, saying that the agencies and other bodies that usually offer care to migrants would only do so when they are disembarked to shore.

The migrants being held at sea were not yet on the island and so the process had not yet begun, the official argued.

Times of Malta is informed that the Health Department has also not yet visited the Captain Morgan migrants, but that Red Cross staff and volunteers have.

Confronted on Tuesday on the steps of the Auberge de Castille, Home Affairs Minister Byron Camilleri insisted that the migrants were being given "every possible care", but did not elaborate further.

Malta closed its ports to asylum seekers in April and told the EU it could not guarantee the resources needed to conduct rescues at sea, because of the COVID-19 pandemic. The move came just as fair weather encouraged migrant departures from the north African coast.

Videos, photos show glimpse of life on board

Following the claims from Alarm Phone detailing desperation and an alleged hunger strike among the rescued migrants, videos and pictures were leaked on social media showing an apparently happier scene.

They showed the migrants dancing and singing, and plates of pasta being served. In one, they sang the Labour party anthem 'Viva l-Labour'.

However it is not clear when these videos and pictures were taken.

Another video being shared on WhatsApp shows people dancing and clapping on board, while others look on.

Local NGOs that also normally offer their services to migrants once they are brought to shore, say they too have not been given access to the offshore centres.

The aditus foundation, Jesuit Refugee Service Malta and Integra foundation last week filed three complaints in three different international fora on the situation. Two complaints were sent to the UN Special Rapporteur on the Rights of Migrants and to the UN Working Group on Arbitrary Detention respectively.

A complaint for breaches of European Union law was also filed with the European Commission. The NGOs are yet to hear back. 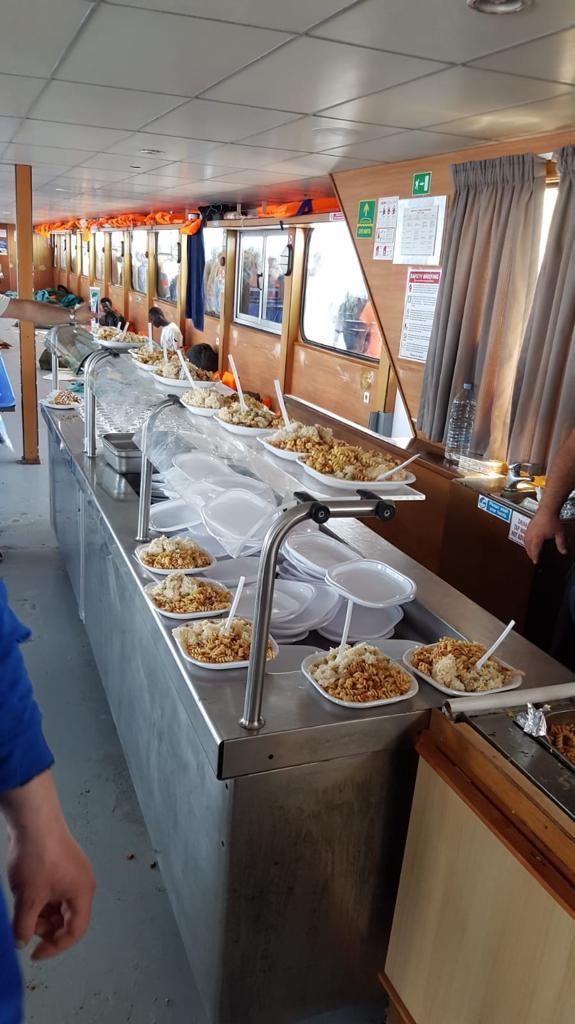 Shortly after the NGO claims of a hunger strike were released, pictures like this, showing the food on offer, were leaked on social media.

Meanwhile, sources in cabinet have described a divergence of opinion on the migration situation.

A minister explained that while all agree that Malta has largely been left to shoulder the migration crisis alone, not all agree with the move to house migrants offshore.

“There are some who feel that it would be best to bring the migrants to land at this point. The women and children have already been brought ashore, so what’s the difference in bringing the men?” one minister said.

He added, however, that he understood the prime minister’s “genuine frustration” at Brussels for not doing more to facilitate a coherent relocation system.