Their heyday may be long gone, their doors shuttered and their old signs gathering dust over the decades, but nine bars and restaurants in the unfashionable end of Strait Street will soon be given a new lease of life.

‘The Gut’, a new project by Valletta real estate company VBL, is planning to transform the largely derelict lower stretch of the former Red Light district into a place of fine dining, cocktails and live music.

Watering holes that over the years have taken on the quality of myth – Silver Horse Bar, Blue Peter, New York, Kennedy, Mae West – will be revived and reopened, each with a unique concept including tea house, ice cream parlour and champagne and oyster lounge.

The company behind the ambitious overhaul has already acquired the side-by-side properties and started construction works as it seeks tenants to operate the final few establishments.

If all goes according to plan, the first phase of the project could be up and running by next summer, and the whole development operational in two or three years.

We wanted to keep the originality of our city

“I’m from Valletta – and the company invests solely in Valletta – so we wanted to keep the originality of our city,” Keith Vassallo from VBL told The Sunday Times of Malta.

Strait Street, notorious particularly among British and American sailors for its bars and bordellos, underwent a near total decline after Malta’s independence but has recently been the focus of regeneration efforts ahead of Valletta’s stint as European Capital of Culture in 2018.

A dedicated artistic director was appointed last year and a number of old bars in the upper end of the street have already reopened their doors, as ‘The Gut’ project now hopes to achieve the same effect beyond the current concentration of activity.

“We need to help the city in growing. We want to create a hub of activity and attract a higher-end target market: at the end of the day this is a city by gentlemen for gentlemen,” said Mr Vassallo.

He said the team have been working with the V18 Foundation and the TVM period drama Strada Stretta, which has filmed some of its episodes on location in the buildings under renovation. 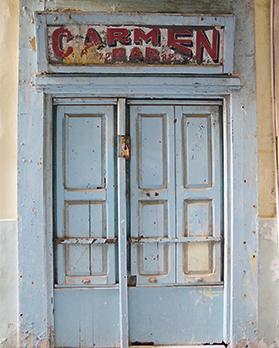 White Star House
■ Set over three floors on the corner between St Christopher Street and Strait Street, the property was originally a small residence of the owners of The White Star Bar across the street, and will now be reimagined as a tea house.

The Mae West
■ Also called The Playboy, this one was named after the controversial American actress & singer well known for her burlesque performances in movies and on stage. It will come to life again as a new restaurant.

Silver Horse Bar
■ Also known as The Galvanized Donkey by British servicemen, the bar was named after the Lone Ranger’s horse and known for its late-night live shows and alternative cabaret. A small stage still survives, and will be part of the plans for a larger bar and entertainment venue.

The James Bond
■ The bar with the longest façade in Strait Street will be brought back to life as an up-market cocktail bar. 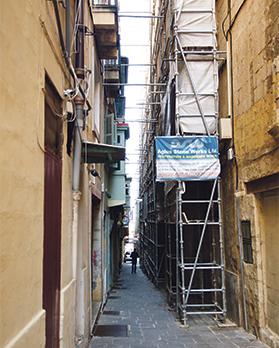 Works under way in Strait Street.

The Victoria
■ Once a hole-in-the-wall restaurant serving easy meals, The Victoria’s kitchen will be whipping up Asian cuisine as a sushi and noodle bar.

The New York
■ Previously called The London before the arrival of the American sixth fleet in the 60s, The New York will be geared towards live performance with an indoor and outdoor stage hosting theatre, music and cabaret.

The Kennedy
■ Pitching towards the hipster market, the bar named morbidly after the assassination of John F. Kennedy in 1963 will focus on craft beers.

Blue Peter
■ An ice cream parlour and sweet shop will replace what was once one of Strait Street’s smaller but more well-known bars.

99
■ The first-floor bar will be the most lavish of the new outlets when it reopens as a champagne and oyster lounge.