Valletta’s largest real estate owner, the VBL Group, has a decade of experience in regenerating property exclusively in the capital. Dubbed the gateway to Valletta, its key to a thriving future is not to ‘denature’ a property from the past, says chairman Andrei Imbroll as he shares his collaborative vision for the city.

In 2018, Places: Design & Living magazine ran an editorial that started by stating: “Valletta is really happening…”

It went on to chronicle how the ghost town had gone “from haunting to hip, embracing a new form of charm and openness that brings with it new adventures and experiences like most capital cities do”.

The VBL Group foretold that future a decade ago, when it was set up in 2012, and has since played a role in its revival.

Malta’s overdevelopment had led entrepreneur and investor Andrei Imbroll, the Group’s co-founder and chairman, to make the conscious decision to focus exclusively on Valletta. Back then, Hungarian Geza Szephalmi, co-founder and Group CEO, had felt it was “strange how undervalued Malta’s most beautiful city was”.

Since then, the Group has grown into the capital’s largest private real estate owner, with a diversified portfolio of over 200 properties, including residential, hospitality, commercial and office space. 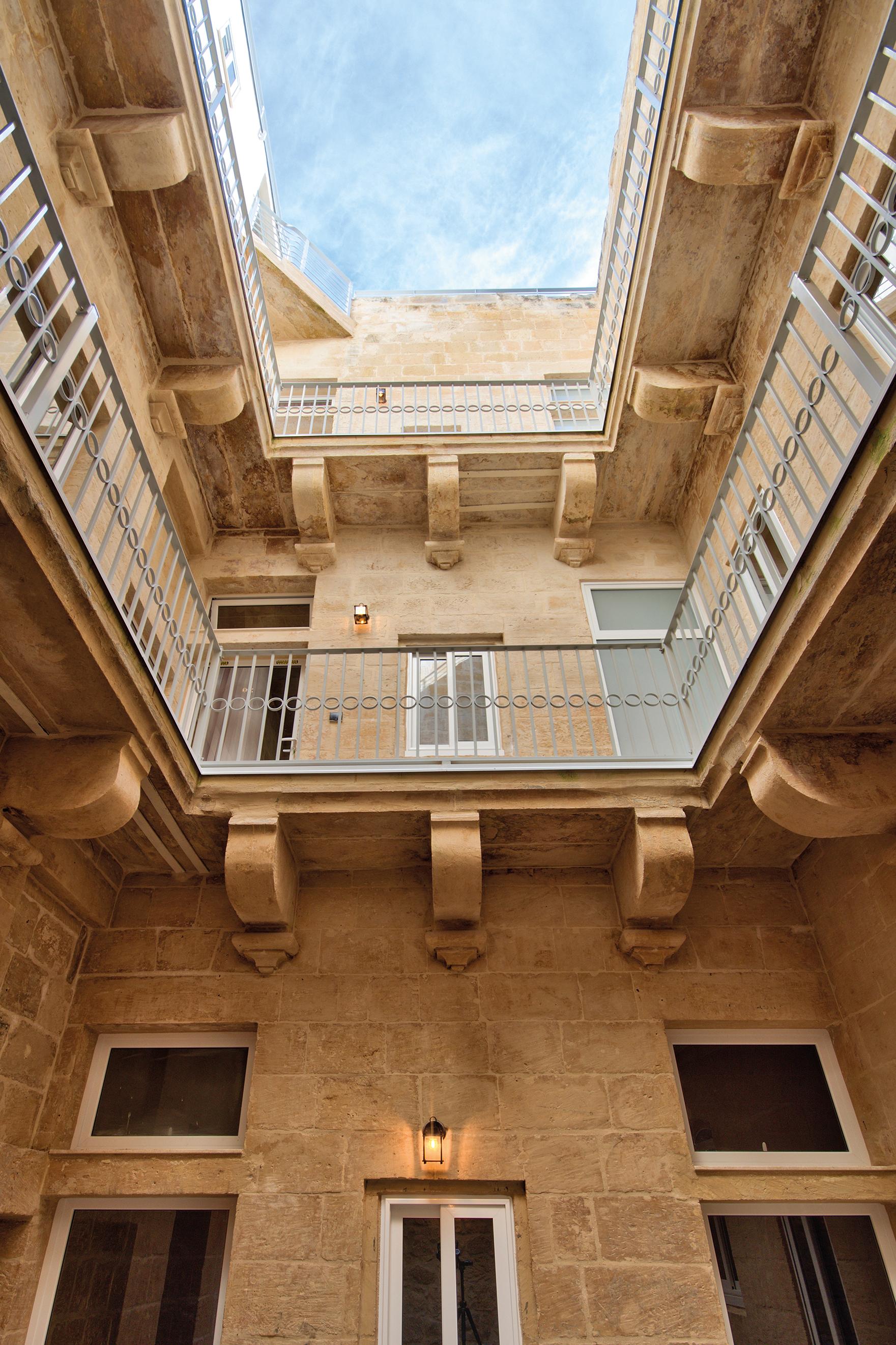 From five-star palazzi to dormitories... Valletta has a home for anyone. 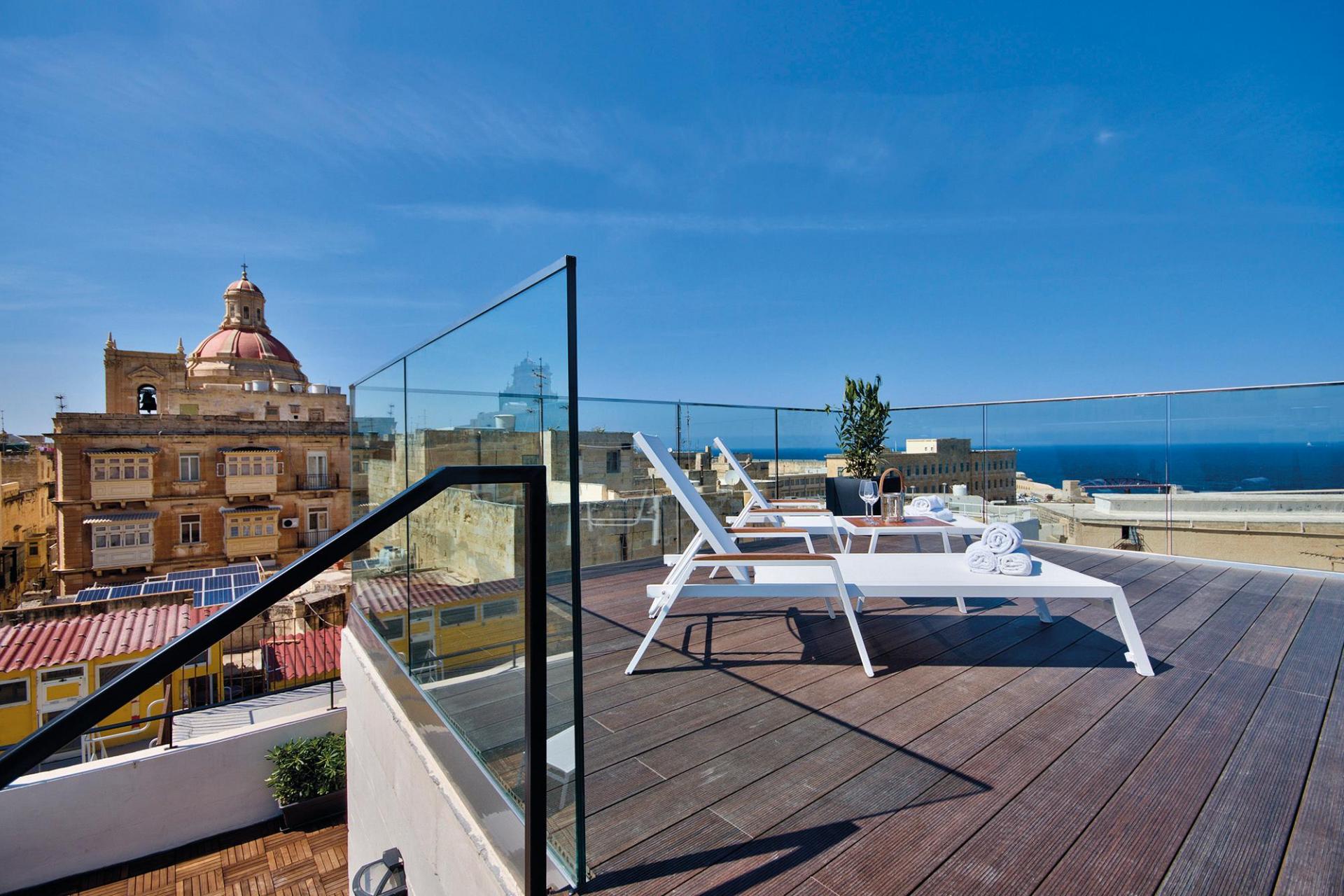 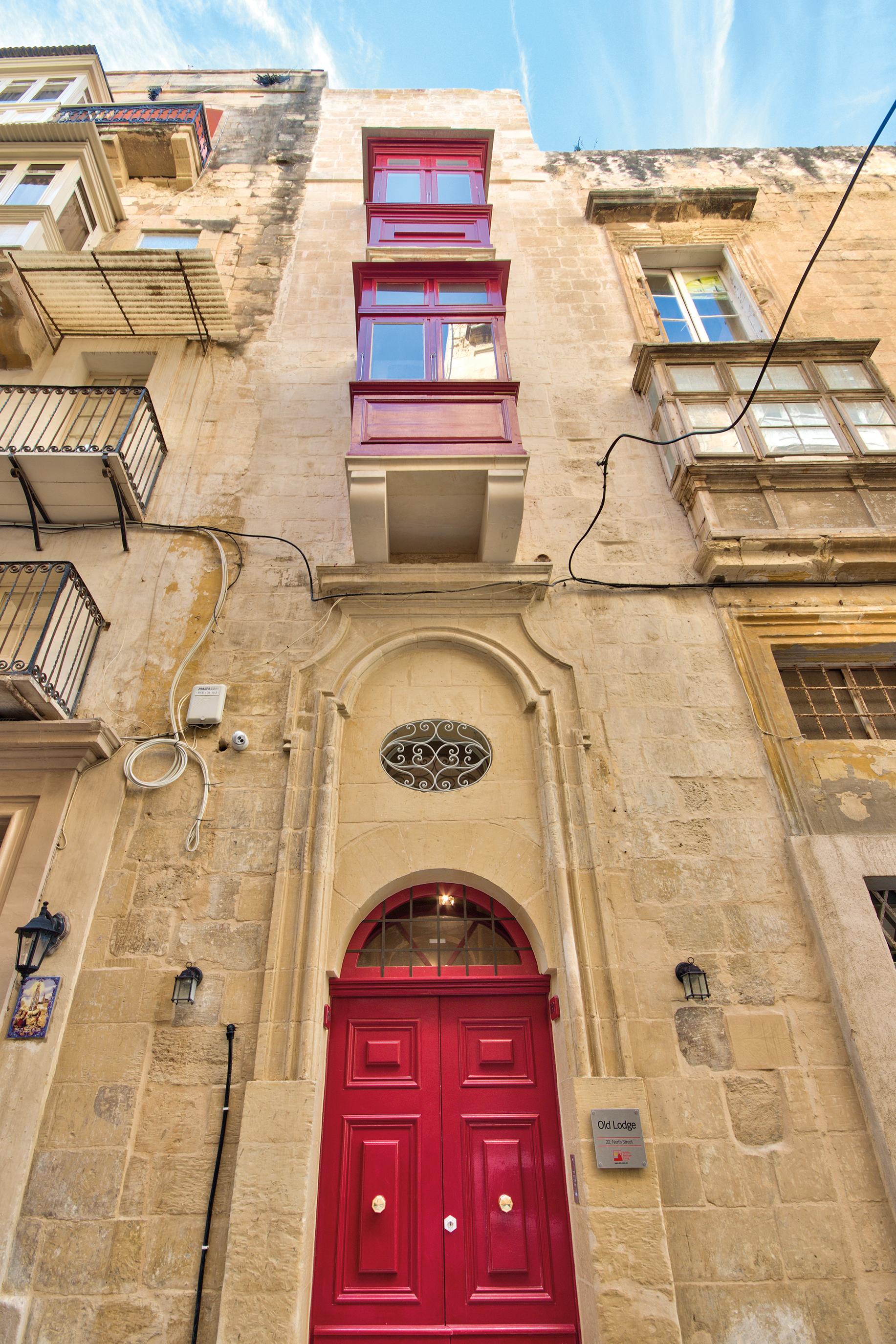 They range from dormitories to five-star palazzi, including roof terraces and pools, as well as bars and restaurants that have revitalised the whole strip of The Gut.

Imbroll and his partners, a team of experienced local and international managers, had the foresight to label Valletta “a huge international brand name”, capitalising on its unique peninsular geographic location, surrounded by the sea, its protected skyline and a contained demand and supply.

“It needed to be placed back where it belongs – as the most sought-after real estate area in Malta,” Imbroll believed as VBL proceeded to purchase, regenerate and operate properties.

Singing its praises, Imbroll boils the city’s success down to urban planning, which ensures long-term functioning. In fact, the whole country should take a leaf out of the historical city, which still performs “beautifully and harmoniously”, 450 years on.

“Looking to the past can really show us where we should be heading and where our future lies,” he advises.

Still looking back – at VBL’s 10-year experience of buying property exclusively in Valletta – Imbroll says it has never been just a question of fixing a façade.

The idea is to add value to the neighbourhood and to the whole city; to look at the fabric of the property and determine its best use – and most importantly, not to attempt to ‘denature’ it in anyway.

‘Denature’ is, in fact, the key word to unlock VBL’s success secrets. “It is about letting the property whisper to you where it should go,” says Imbroll, harping on the natural aspect of the development process.

In its dormitory project, for example, where each room is connected to the other, the obvious approach would have been to drop down the dividing walls. But that would have denatured the building, he insists.

Instead, the project opened up doors to those who do not have the means to stay in five-star properties, Imbroll continues about not wanting to close up Valletta to the select few.

Not every single room in the capital can be short-term accommodation either, he insists, because it would drive prices up, blocking accessibility.

While the city enjoys the influx of high-end tourists – as the country has been aiming to attract – Imbroll also wants the young architect, travelling on a shoestring budget, to find his spot in the city.

VBL’s vast portfolio, extending from basic to luxurious and anything in between, is, however, all connected by a thread of traditional architectural touches, such as typical Maltese tiles and wooden beams, that have been retained throughout.

“You will always know you are in Malta – and specifically in Valletta – when you are in a VBL property,” Imbroll assures, investment in heritage being its main domain.

The key to VBL properties is not, however, only their restoration, but also finding them a use that renders them relevant and sustainable, he insists.

Although VBL stands for Valletta Boutique Living, the group is not in the business of developing boutique hotels and sticks to managing them.

But it is not worried that others may have done a shoddy refurbishment job. On the contrary, from its experience it can safely say that 90 per cent of the works undertaken around Valletta are of “really good quality”.

Renovating a palazzo in the Unesco World Heritage Site is, after all, much harder than a greenfield project, so whoever embarks on this kind of job certainly has a passion and an appreciation of its beauty, Imbroll believes.

The result is that Valletta’s accommodation portfolio boasts “phenomenal” products. “I doubt any historical city in the world offers this,” maintains the former medical doctor, who spent years away from Malta.

Moreover, the fact that the Valletta boom has happened in the last decade is positive because awareness of the importance of heritage is actually stronger than it was in the 1970s and 1980s.

“We would have made a mess of it then,” Imbroll points out.

Now, Malta’s ‘uglification’ is only amplifying Valletta’s significance and shining a spotlight on its beauty and success… But it did not have to come to this for the city to thrive.

Before moving on, Imbroll glances back at the last decade once again – a period that has shown that with a vision, shared by a number of players on the market, change can truly be brought about.

Today, Valletta has proven to be true to that vision. Apart from a cultural melting pot, it is home to most of Malta’s Michelin-star restaurants and is also an important nightlife hub for a niche party scene.

In a nutshell, Valletta has become what it should be. It is an example of a focus on quality, Imbroll believes.

And with more coordination, vision and effort, it can push this idea even further and really attract the A-listers.

“We have made huge steps in the last 10 years. We are now just a few steps away,” Imbroll says, confident that his goals for the city can be achieved.

“This is a Group that is doing things differently, and Valletta is an example of how possible it is to build something successful without taking up a single additional square metre of land,” Imbroll stresses. 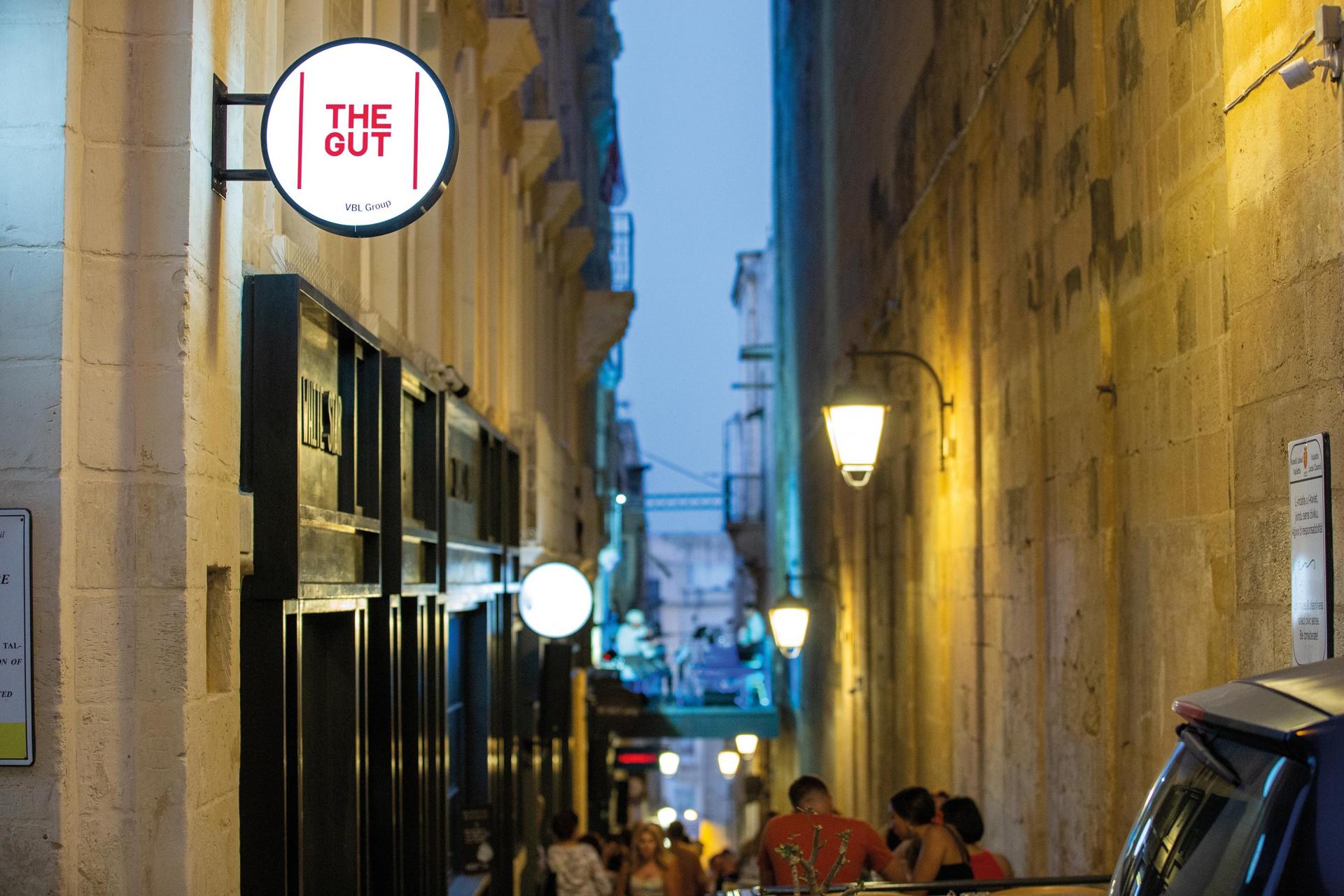 VBL's next major project is a mixed-use development, spread across the first-floor level of The Gut.

In fact, VBL’s next major project – which, indeed, does not take up a single square metre of land – is a mix-used, 5,000sqm development, with a focus on modern offices, sorely lacking for big firms in the city and suitable for the digital nomads the island is moving to attract.

The project spreads over five floors of the building in The Gut – and in keeping with the idea that development should not necessarily eat up land, it goes a step further by ‘increasing’ it through a 1,000sqm roof garden.

“We are interested in absolutely any square metre in Valletta at the right price,” says Imbroll about VBL’s risk-spreading business model and his overarching conviction that the city is the island’s saving grace.

Clearly, the entrepreneur is not put off by problematic properties. On the contrary, the more challenging, the more exciting. What counts is responsible development; respect for the city, its roots and its residents…

“And the risks tend to resolve themselves alone…”