Global expert on nutrition Robert Lustig warns that concerns over sugar’s effect on weight are insignificant compared to its deadly effect on the metabolism.

Adding a spoonful of sugar to your coffee may seem like a harmless habit, but according to world-renowned nutrition expert Robert Lustig, that extra dose of sweetness could be killing you.

The concerns most people have about sugar are related to their weight. Dr Lustig, however, says this should be the least of their worries.

“Everyone assumes sugar is bad because of the calories, or because it makes you gain weight. In fact, the health detriments of sugar are unrelated to the calories,” Dr Lustig told The Sunday Times of Malta, ahead of a public talk on processed food he is giving in Malta next weekend.

The problem with consuming too much sugar, he says, is the effect this has on the body’s metabolic system.

Sugar consumption has caused the rates of diseases such as diabetes, hypertension and heart disease to soar in most countries, including Malta.

Sugar, made up of glucose and fructose, is converted to fat in the liver. It then gets deposited into fatty tissue or in the arteries, all the while increasing the risk of chronic disease in the liver. 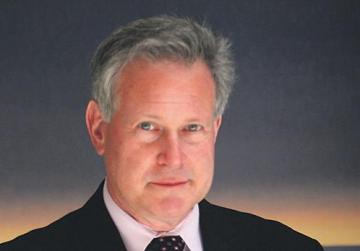 Sugar expert Robert Lustig will give a talk in Malta next week on diabetes and processed food.

Ageing is also sped up when high doses of sugar are consumed, says Dr Lustig, whose lecture Sugar: The Bitter Truth has been viewed over six million times on YouTube.

Another problem is that once consumed, suger stimulates the reward centre of the brain, which then makes the body crave it even more.

“This sets up a vicious cycle of consumption and disease, culminating in type two diabetes, heart disease and fatty liver disease. And let’s not forget tooth decay.”

Dr Lustig is a professor of paediatrics in the Division of Endocrinology at the University of California. In his work, he focuses mainly on the impact of sugar on diabetes and other chronic metabolic illnesses.

Sugar, he says, need not be eliminated completely from the diet. Instead, the focus should be on controlling the dosage.

Dr Lustig’s guidelines are that women should consume no more than six teaspoons of sugar per day and men no more than nine. The World Health Organisation advises the higher clearance of 12 teaspoons daily.

When sugar went from being a condiment to food, the dose ratcheted way up, and now we’re getting sick and dying from it

However, cutting down is not as straightforward as this, because sugar hides in three-quarters of all processed food.

“When sugar was a condiment and we got it from 2kg bags, we knew how much we were consuming and we didn’t have this problem.

“But when sugar went from being a condiment to food, the dose ratcheted way up, and now we’re getting sick and dying from it.”

In Malta, this is a particular problem, he adds. “Almost all food is imported, and to increase shelf life, it is processed. This is why Malta, like many other island countries, has such high diabetes rates.”

Hidden sugar in processed food is also difficult to identify, as it can be marked in over 50 different ways on food labels.

And processed foods that contain sugar do not necessarily have a sweet taste, so one can easily “be duped into consuming it without even knowing”.

For example, according to the WHO, one tablespoon of ketchup contains around four grams (one teaspoon) of free sugars.

Meanwhile, a single canned soft drink can contain up to 10 teaspoons.

So think twice before adding that extra spoonful to your tea.

Dr Lustig’s talk, Diabetes & Processed Food: An Experiment that Failed, will be delivered on Saturday at 9.30am at the Mediterranean Conference Centre. He was invited in Malta by PR firm Narrative Structures .

The talk is being organised by Narrative Structures in collaboration with the Parliamentary Secretariat for Health and The Health Promition an Disease Department.

Admission is free of charge but seats are limited. Attendance is confirmed upon reservation at: information@narrativestructures.com.

No sugar tax planned in Malta

Last week, the UK announced it would introduce a sugar levy on soft drinks in two years’ time to tackle the growing obesity crisis.

While Dr Lustig is in favour of anything that promotes a reduction in sugar consumption, he says that “taxes are certainly the ‘low-hanging fruit’ of policy efforts”.

In fact, introducing a sugar tax in Malta is not on the cards just yet. Health Parliamentary Secretary Chris Fearne is sceptical about whether this alone will slice through burgeoning obesity figures.

He believes that unless Europe starts treating obesity as a disease, it will take longer to address the fast-growing health epidemic, which is expected to swallow €35 million from the island’s coffers by 2020.

Maltese children are still the biggest guzzlers of soft drinks among 40 nationalities that took part part in a World Health Organisation study, but Mr Fearne feels education is paramount.

He is confident that the inter-ministerial committee – in the process of being set up to follow the Nationalist Party’s healthy living and obesity Bill – will examine the numerous options available to target this epidemic, as well as looking closely at how the tax was being implemented in the UK.

“A sugar tax on its own is not going to win us the battle. We need to treat obesity the same way we treat any other disease on a Europe-wide level,” Mr Fearne said, adding that childhood obesity would be one of the country’s priorities during its 2017 EU Presidency.

Too much sugar in baby food 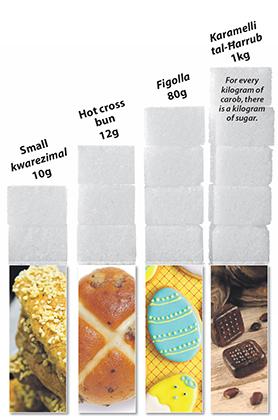 Easter specialities are full of it (values are approximate)

Draft rules allowing baby food to continue containing up to three times the level of sugar recommended by the World Health Organisation have been rejected by the European Parliament. The proposed rules were made by the European Commission, which recommended that the intake of free sugars should be lower than 10 per cent of the total energy intake.

However, under these proposals sugar in baby food would have continued to provide 30 per cent of energy intake.

MEPs who opposed the draft rules said the decision would have contributed to the rising levels childhood obesity and could also affect children’s taste preferences.

Coming off the white stuff

Avoid white and brown sugar, honey and other caloric sweeteners which are chemically manufactured, such as high-fructose corn syrup.

Limit the consumption of confectionary food, chocolate and desserts, as well as honey, syrups and fruit juices.

Get your daily dosage of sugar from those that occur naturally, such as in milk, whole fruit and vegetables, whole grains, legumes and nuts.