“I wish I wasn’t sitting down,” she told me, not 30 seconds into The Hot Club Of Valletta’s set. And she wasn’t wrong or alone either, as fully half of the packed theatre was dancing on their seats, while the other half bobbed their heads in unison, to the beat.

This, I have to admit, was not what my expectations were for a Tommy Emmanuel concert. I’d been to two other Tao Productions events before and, though both were great, the magnitude of the show promised by Pjazza Teatru gave this evening an altogether different dimension.

But then again, what were my expectations? Unlike Tao’s Andy McKee concert, where I knew the repertoire almost by heart, I had purposely not researched very much into Emmanuel, not knowing much past the fact that he’s Australian, and that he plays guitar very well indeed, with pick and in finger style. All correct, it turns out, but first things first.

I had never heard of The Hot Club Of Valletta before, so it came as a pleasant surprise to me to see such an awesomely talented ensemble of musicians, playing a style known as gypsy jazz, among other monikers. Accordionist Yuri Charyguine, guitarists Joshua Bray and Steve Delia d-Delli, bassist Anthony Saliba l-Fesu, and the de-facto frontman, violinist George Curmi il-Puse gave a wonderful show indeed, each showing off their talents and musical dexterity. It’s always great to see talented musicians play styles we don’t immediately associate them with, and The Hot Club Of Valletta truly played to each member’s strengths. If you get a chance to watch them, order a large spritz, and make sure it lasts the whole set, as you won’t want to go the bar.

He does not just ‘play’ the guitar; he manipulates it a dozen ways, plucking, picking, hitting with hands and knuckles, tapping, and so on

On to the main event. He has performed to an estimated 2.85 billion viewers at the closing ceremony of the Summer Olympics in 2000, in Sydney. He has played with artists such as Buddy Williams, Chet Atkins, Eric Clapton, and Les Paul, and in 2007, won a Grammy for Best Country Instrumental Performance. So, this is Tommy Emmanuel, I later found out. None of that matter mattered though, not as I sat transfixed watching him exploit his guitar a thousand different ways, each highly technical move executed liked a well-oiled machine. 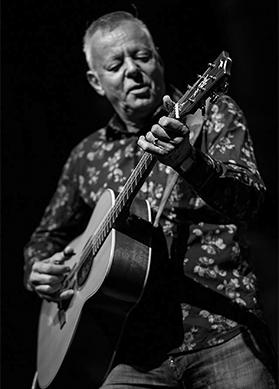 I can’t really explain how Emmanuel plays his guitar, not without visual aids. But, for what it’s worth, he does not just ‘play’ the guitar; he manipulates it a dozen ways, plucking, picking, hitting with hands and knuckles, tapping, and so on. This produces sounds we do not usually expect to come from a simple guitar. The soundscape Emmanuel produces on stage is far richer than anyone would expect when seeing a lone man with a guitar in front of a mic, and often feels like he is accompanied by an invisible band. It was only the venue’s acoustics and brilliant sound engineers that could do it justice.

Emmanuel’s set was genial too. Picking just the right balance of popular cover versions reimagined his way and self-composed numbers, the set was well paced in all respects and served to engross everyone in the performance. If I had one criticism it would be that the cover versions, no doubt chosen because they are incredible songs, are occasionally drowned beneath all the technique and guitar playing.

I for one, did not immediately recognise some of them, but then again, these are songs reimagined in the Tommy Emmanuel way, and the crowd lapped it up, so who am I to question it?

In the end, this was a wonderful concert to have attended, with some superb talent on show.

The setting at Pjazza Teatru Rjal was as fitting as could be, making this evening of gypsy jazz and finger style guitar an absolutely perfect summer’s evening. Top job by Tao Productions once again.