Addressing a news conference, Finance Minister Edward Scicluna said the government expected this surplus to grow not reduce when accrual accounts were presented. 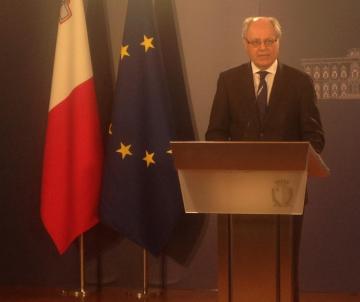 "From a deficit of €362m in 2012 this government turned things around registering a surplus of €8.8m in four years. We broke the cycle of borrowing to finance annual deficits."

Prime Minister Joseph Muscat said he was proud of his economic team, Prof. Scicluna and the government as a whole.

"We performed an economic miracle without resorting to austerity, we cut taxes and increased the income of those on the lower rungs through targeted social measures.

"This miracle should be sustained through responsibility. The worst thing we can do now is to go on a spending spree.

"I know I will receive requests on how to spend money. We have to ensure the surplus becomes a trend. We anticipated it by two years," he said. 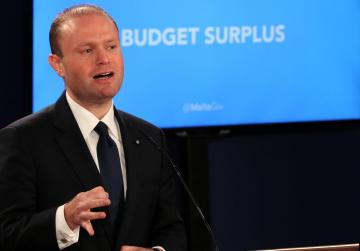 Dr Muscat said that the doctor had cured the patient but the two now had to work together.

He noted that the results did not include 70% of the IIP income which had not yet been spent.

He said that if this trend persisted it would reduce pressure to raise taxes. It would also help Malta move forward with the large infrastructural projects it desperately needed, such as mass transport and the Gozo tunnel.

The surplus was also a positive sign for investors.

A statement announcing the surplus was issued by the National Statistics Office this morning.

The NSO said it has submitted the data to the European Commission by means of the Excessive Deficit Procedure notification for 2013-2016, which data shall be published locally on April 24.

Compared to 2015, recurrent revenue registered an increase of €172.2 million whereas total expenditure went down by €72.5 million. This resulted in a positive change in the government’s consolidated fund by €244.7 million.

In 2016, recurrent revenue was recorded at €3,807 million, up from €3,634.8 million last year. The comparative increase of 4.7% was primarily the result of higher income tax and social security which increased by €143.6 million and €64.8 million respectively.

Compared to 2015, total expenditure stood at €3,798.1 million down from €3,870.6 million, mainly as result of lower spending on capital expenditure and interest component which outweighed added outlays on recurrent expenditure.

The interest component of the public debt servicing costs stood at €223.5 million, down from €232.3 million last year.

Government’s capital expenditure witnessed a decline of €271.2 million, and was recorded at €310.3 million. This was mainly the result of lower spending on EU funded projects due to the closure for the payments under the EU funding programme 2007-2013.

At the end of 2016, central government debt stood at €5,474.9 million, up by €140.2 million over the same month the year before. This was the result of higher Malta Government Stocks and Treasury Bills, which added €180.9 million and €32 million respectively.

On the other hand, domestic loans with commercial banks and foreign loans went down by €56.4 million and €10.4 million respectively.

Higher holdings by government funds in Malta Government Stocks resulted in a decrease in debt of €10.2 million.