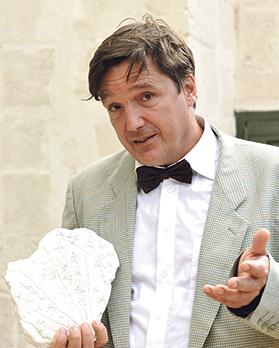 A German academic believes he has solved one of Malta’s enduring archaeological enigmas and intends to sail the Mediterranean on a replica Bronze Age vessel to prove it.

The Tal-Qadi Stone, discovered at the temple complex of the same name in Salina and exhibited at the National Museum of Archaeology, in Valletta, is a book-sized limestone slab, divided into five segments and incised with figures of stars and what has usually been thought of as a crescent moon.

Most archaeologists believe the stone, probably a fragment of a larger whole, was a star map or moon calendar but its exact purpose remains a mystery.

Kai Helge Wirth, a geographer and art scientist who has been researching the stone for some four years, believes he has cracked the mystery. The stone, he says, was an ancient navigational tool, a map not only of the stars but of water currents in the Mediterranean.

Illuminated from the right angle, he suggests, the moon figure on the stone reveals itself to be not a moon at all but a boat: a “proto-Phoenician bird-bark”. The stars are the constellations Scorpio, Virgo and Leo. They correspond directly to the early Phoenician shipping routes.

“The stone says: ‘This is our ship. These are the lands we can sail. This is our world.’ And the people who made this stone were here, making Malta the centre of the Bronze Age shipping world.”

His theory, not published in any peer-reviewed journals, goes further.

Those who made the stone were here, so Malta was the centre of Bronze Age shipping

Surrounded by literature on the constellations, a replica of the Tal-Qadi Stone and his self-published books on the subject, Dr Wirth points out that physicist Isaac Newton once theorised that the constellations we know were originally representations of ancient coastlines, projected onto the random field of stars by mariners to navigate the seas.

He bases this on Newton’s Chronology of the Ancient Kingdoms, a late work that heavily references Greek myths and is more closely associated with Newton’s mystical studies than his work on physics.

Dr Wirth claims the Tal-Qadi Stone proves the truth of Newton’s theory – Leo is the Black Sea, Scorpio the Eastern Mediterranean from Cyprus to Egypt, and Virgo the Adriatic – and that all the constellations we know line up perfectly with stretches of coast around the world, as far as Asia and the Americas.

If true, the theory would make the Tal-Qadi Stone the oldest representation of the zodiac ever discovered, pre-dating the Egyptian Dendera by thousands of years.

It would also suggest that trade between civilisations on opposite sides of the world began thousands of years earlier than commonly believed. 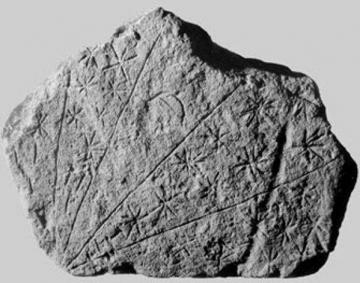 Dr Wirth accepts that his theory may appear outlandish and that accepting it would require upending a lot of what is thought to be known about the ancient world, including Malta, but insists his facts speak for themselves.

And soon, he intends to put what he believes to the test. Working with collaborator Dominique Görlitz, he hopes to set sail in a Bronze Age-era reed boat on a journey following the instructions he claims are laid out on the Tal-Qadi Stone, starting in the Eastern Mediterranean and finishing in Valletta.

Mr Görlitz, who is an amateur archaeologist and filmmaker, has received significant attention for several similar journeys but has also found himself embroiled in serious controversy after allegedly defacing a carved tablet in the Great Pyramid of Giza to prove the conspiracy theory that it was built 20,000 years ago by the lost civilisation of Atlantis – or by aliens.

Dr Wirth’s own theories on the Tal-Qadi Stone and the origin of the constellations have so far attracted little interest from the more mainstream archaeological community but he remains resolute in the validity of his discoveries.

“I spoke to a professor who said this couldn’t possibly be true because he had never heard of it,” he said.

A view of the Tal-Qadi Stone’s significance was put forward in a 2001 article in The Oracle, a journal published by the Maltese Archaeological Group.

Author Chris Micallef analysed astronomical data from the Temple Period in relation to the Tal-Qadi temple and found that the interval of days between certain moon phases fit into the sequence recorded on the stone, alongside findings on the alignment of the temple with the sun and moon.

He suggested that the stone may have been used to read the days between these phases but acknowledged that his research could not give a definitive answer.

He later produced a documentary on the Tal-Qadi Stone which won the Best Director award in its category at the New York International Independent Film and Video Festival and was awarded the Midalja għall-Qadi tar-Repubblika for his research last year.