The Malta Union of Teachers on Thursday turned down an invitation for talks by the minister of education, saying its position on laws currently before parliament is clear and it intends to forge ahead with strike plans.

The minister, Evarist Bartolo, requested a conciliation meeting to clarify the part of a proposed law which has caused problems.

The union has directed all educators to go out on strike on Monday, saying that it is unacceptable that in terms of a bill now before parliament, the permanent warrant will no longer be permanent. It has also complained about lack of consultation.

The minister said it appeared that the problem stemmed from clause 23 of the Teaching and Allied Professions Act,  which says that:  "Any person who, on the coming into force of this Act, is in possession of a permanent warrant obtained under the provisions of the Education Act, prior to its repeal by the Education Act, 2018, shall be deemed to be a warrant holder with the same rights and
obligations as though such warrant had been issued in accordance with the provisions and conditions of this Act."

The new law then goes on to say that a warrant is subject to ongoing professional training and a proficiency test.

In a letter sent to Minister Evarist Bartolo, MUT president Marco Bonnici said that the MUT was disappointed by the manner how it came to known of the proposed changes to the laws on education and the teaching profession.

“Had we not realised that the act was being tabled in Parliament, this would have been passed without any changes.”

“It is an insult for us, as a union that has worked tirelessly, to be ignored in such a way, especially since some of the issues had already been flagged by the MUT in 2016,” Mr Bonnici said, going on to accuse the government of continuously dragging its feet when dealing with matters in the education sector.

He said the MUT felt that it had made its position clear and it would go ahead with its planned actions.

Mr Bonnici concluded the letter by telling the minister that he looked forward to a meeting planned for Monday.

Earlier on Thursday Mr Bartolo called on the Malta Union of Teachers to hold "talks, not war".

Speaking in Parliament on Wednesday, Mr Bartolo also expressed his willingness to reconsider any aspect of the bill.

His ministry expressed “disappointment and surprise” at the planned action and invited MUT to a meeting on Thursday morning.

MUT ordered all educators in State, Church and independent schools including post-secondary and tertiary institutions not to report to work on Monday.

The issue revolves around a proposed Education Act, which the MUT says will revoke teachers’ warrants in favour of ‘temporary’ ones. The warrants will be renewed by a Teachers’ Council on the basis of continuous professional development and a proficiency test.

Further industrial action will also be ordered following the strike, the union said. 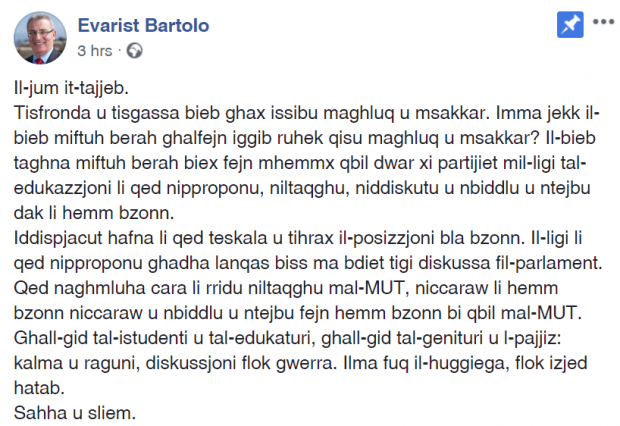 The Faculty of Education said it participated actively during the consultation process leading to the formulation of the new Education Act and provided substantial feedback.

"Although this was based on research evidence and documentation it has only been taken into consideration marginally."

The faculty said it was especially concerned with the lack of clear parameters in relation to the warranting of the teaching profession. This could potentially have negative implications, which could undermine teacher education and, even more seriously, the whole profession.

Furthermore, the proposed Act ought to give more prominence to the development and upgrading of teacher education.

The law, as proposed, requires major re-thinking and should put teachers and learners at the centre of a wider process- Faculty of Education

"There is no reference to the minimum qualifications necessary to qualify as a teacher and the mechanisms proposed to regulate this are obscure," it complained.

The law, as proposed, requires major re-thinking and should put teachers and learners at the centre of a wider process, the faculty said.

"At present, it can lead to excessive centralisation of decision taking, and to a situation where the voices of educators and learners are not given the space they deserve. The institutions that this Act will govern, including the Council for the Teaching Profession, require a better representation in their composition and a transparent process in relation to the manner through which members will be selected. It should be ascertained that they all have the necessary expertise for the role assigned to them."

Backing for the MUT

The Forum Unions Maltin backed the MUT and its directive.

"The MUT’s measures to safeguard the professional status of educators by opposing the proposed act are legitimate," the forum said, adding that there has to be a distinction between collective agreement matters and legislation.

"Once a union negotiates a collective agreement, whereby conditions of work and obligations have been agreed upon, the Union cannot expect to find measures which change conditions of work for employees through legislation," it said.

Separately, the Association of Parents of State School Children appealed for a solution and said a strike should be a measure of last resort.

Speaking in Parliament in the evening, the Education Minister reiterated his denial that the warrants of present educators would be affected by the new bill.

To the contrary, he argued, he had removed the Education Minister’s power to directly award warrants, handing this exclusively to the Council for the Teaching Profession.

The new law, Mr Bartolo said, would protect teachers from violence or abuse faced while on duty.

In a statement in the evening, it said it had every intention to meet, explain and clarify matters and amend the bill where necessary. The bill was still at an early stage and could be improved and the ministry had the will to reach an agreement.

The ministry said it had requested a meeting with the MUT on Wednesday but this was refused and the actions were announced. The reason it was given was that the MUT was awaiting direction from the council and its members. Even because of this, this evening’s news was unexpected, the ministry said.

It said students, parents and educators were suffering because of the rivalry between MUT and UPE in their bid to appear the most aggressive.

In its statement, the MUT had said it was astonished the government was denying that these unprecedented and objectionable issues were included in the new education act - which would have wide-ranging implications on teachers' warrants and the newly proposed kindergarten educators licences and learning support assistant licences, it said in a statement.

In the evening, teachers seemed to be posting the same post on Facebook asking for support from other professions.

It read: "Dear friends who are lawyers, doctors, engineers, nurses and all those who need a warrant to practice your profession. I kindly ask you to read the proposed change in the Education Act especially re the warrant issue where it states that the warrant given to educators even to those who have been in the profession for over 20 years will be revoked and they have to work again to be awarded the warrant again. This can mean a threat to your professional warrants too. So dear warranted professionals support educators in this. Remember you are in that profession because of an educator."

A day of “mourning of the profession” will also be held on Friday to mark World Teachers’ Day. Members are encouraged to wear something black during the day and change their social media profile pictures to an image which would be provided Thursday, they said.

But the minister said that, in his book, Teacher's Day should be every day, and not an arbitrary date on a calendar.

The union had also objected to several other clauses in the Education Act, including a new commission regulating licences which will be made up of several government appointees.

It called on the government to withdraw the relevant Bills presented in Parliament.

The Union of Professional Educators - Voice of The Workers said in a statement it would be supporting MUT in its strike action.

It hoped MUT would not buckle under the Education Ministry’s pressure and withdraw the strike at the last minute as it has done before a sectoral agreement back in 2017.

UPE encouraged its members and prospective members to “show solidarity and strike as well”.

“UPE will continue fighting for the withdrawal of this Bill as it diminishes the educational profession,” the union said.

It later added that it will be meeting government officials on Friday to discuss the Bill.

The PN and the Democratic Party both backed the MUT position.

Democratic Party said the government was riding roughshod over the teachers of Malta, particularly in a time when the profession was increasingly under strain. "The proposed Education Act must be halted and withdrawn. There is value to be found in teachers keeping up to date with latest good practices, however, the recently signed collective agreement already stipulates that career progression depends on them," it said.