Hibernians registered a repeat win in the Super Cup to add to their maiden success last year.

This year’s Super Cup final had reigning champions Gżira Athleta, fresh from their pre-season Independence Cup win a fortnight ago, cross swords with Hibs. The game resulted in a very balanced affair with both finalists enjoying different good spurts and the lead changing hands a number of times.

Hibs got off to a strong start with Swede William Ahlberg notching the All Blacks’ first seven points and then co-ordinating with another new face David Bugeja for a 14-5 lead after five minutes.

“This win meant a lot to me and I think it was important for the whole team,” Ahlberg, who joined Hibs on loan from Luxol late last week, said.

“This was just the first step and I am very excited for the upcoming season. I am also extremely excited to be with such a professional club and all my new team-mates. Our team spirit is great. We have fun and train hard every day so I cannot wait to see where this will take us.”

Likewise, Bugeja was very pleased for his new team’s success.

“I am extremely satisfied that we managed to beat the champions,” said Bugeja, who was on the books of Floriana last season. 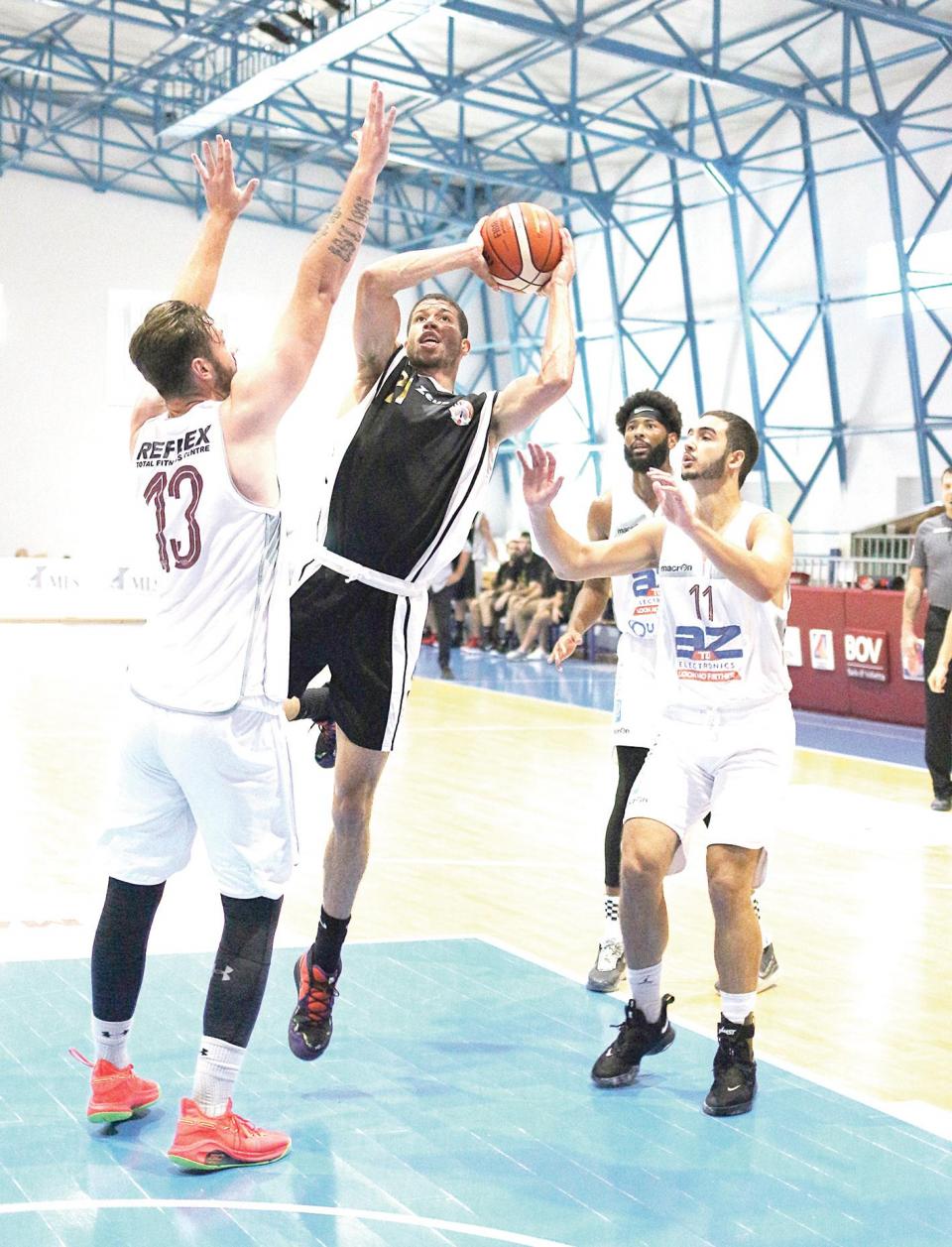 Hibs player Chandler Rowe (centre) tries a shot despite the challenge of Ian Theisen (no. 13) and Matthew Gouder.

“We worked well as a team and managed to score in the crucial moments. I believe that the team has a lot of potential and we will surely improve further in the season.”

Despite calling an early time-out, Gżira Athleta could not immediately recover the margin as the first quarter ended with the Paolites 21-9 ahead, Hibs also having the first points from the neo-foreign import Chandler Rowe, 24, from Indiana.

“This was a great start to our season,” Hibs’ young forward Luke Farrugia, who had some important playing minutes in the final, said.

“Our team has managed to add some new names to the team list that surely will be an asset. However, the season is a long and challenging one and it will surely be interesting to see how it unfolds. This final is a good indication that things are heading into the right direction. But we are still not exactly where we want to be.”

Four long distance shots in as many minutes, early in the second quarter, led to Gżira’s comeback. Serb Milos Novakovic had a strong impetus at the offensive end with two baskets followed by two two-pointers and Nathan Xuereb added a further two treys to make it a momentary 27-25 game.

It was now Hibs’ turn to call a time-out. Although the latter did return with three consecutive baskets, Gżira were not to be undone and they closed off the first half with an 8-0 run coming off Matthew Gouder’s and Connell Crossland’s hands to tie the match at 33-all at half-time.

The Athleta mentor was visibly disappointed after the match: “The feeling is always not good when you lose a game. I feel we did not deserve the victory as we played without enough energy and enough desire but still had a chance to win,” he said.

“We missed the energy of Peter Shoults. Our aim is now to make some corrections to play better in the next game. We know the direction to success and that is just hard work.”

With everything to play for in the last quarter, a respective brace of baskets from centres Ivan Demcesen and Marko Matijevic helped the Paolites to a 63-58 lead two minutes from time.

Demcesen, now in his second season with Hibs, felt that his team deserved this success.

“This was a very difficult game for both teams and there were many turnovers during the game but I think we deservedly won in the new season. I expect us to be even better than last year,” the towering Serb said.

“We have new players and we are training well. I hope that in the end we will all be successful, be better than last year and personally contribute much more this season.”

Last minute free throws from Matijevic and Bugeja seemed to close off the game but a late Pace trey, close to the final buzzer, kept Gżira Athleta’s hopes of registering their 15th Super Cup success in history high.

Yet Hibs kept their cool and defended their slender three-point lead till the end.