The upcoming piece Il-Qfil u l-Ħelsien Skont Manwel Dimech produced by Teatru Malta in co-production with FĊN takes to the stage. Director and scriptwriter Victor Jacono and composer and musical director Kris Spiteri speak with Lara Zammit about the production. 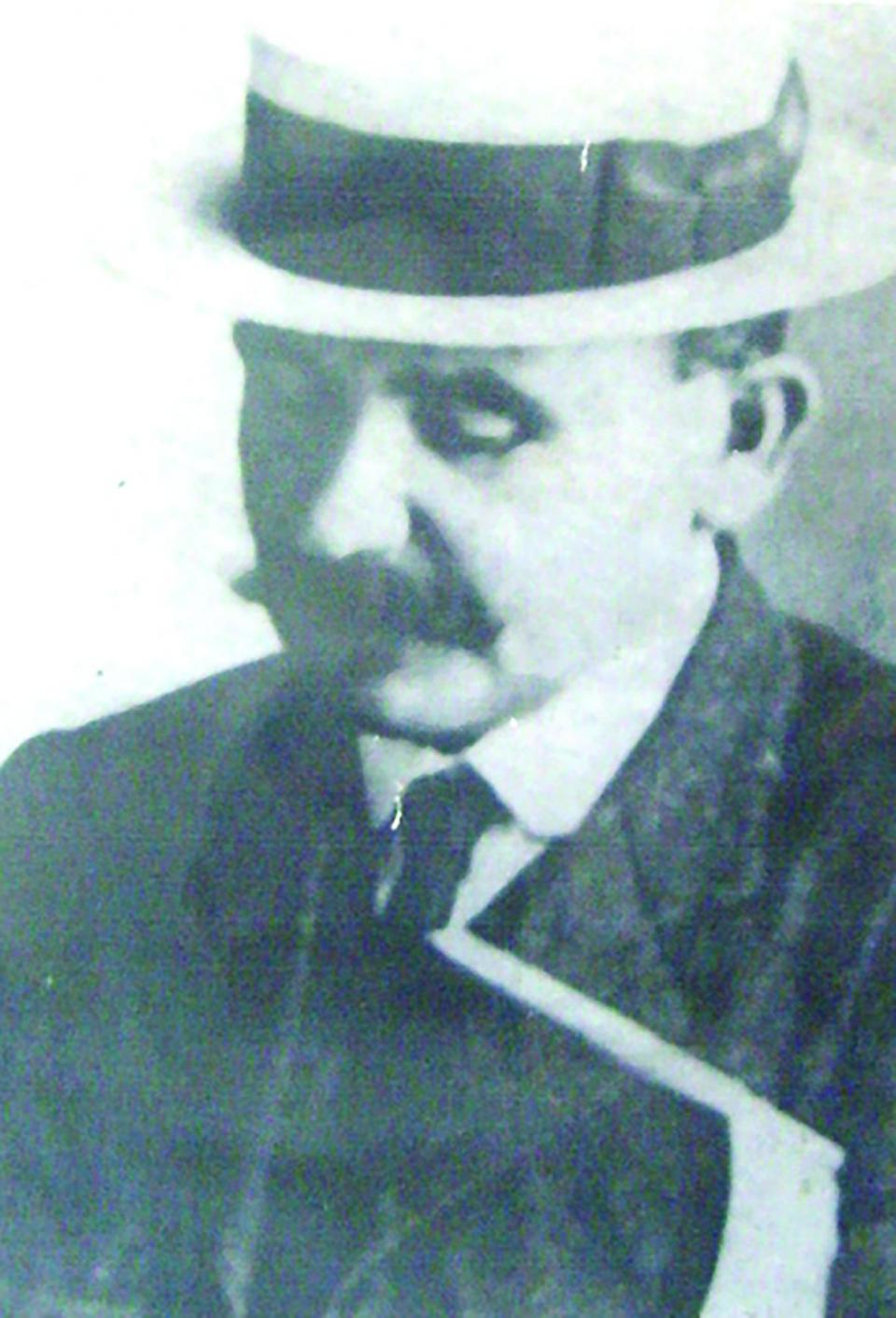 Marking the centenary of his death, Teatru Malta’s upcoming production Il-Qfil u l-Ħelsien Skont Manwel Dimech pays tribute to a man who almost single-handedly championed in Malta the cause of the dispossessed and the impoverished, fighting for their dignity and happiness against all forms of oppression. The production seeks to interpret Manwel Dimech’s life and activism through his own eyes.

Speaking about how the play aims to elucidate the most poignant moments of Dimech’s life and legacy, Kris Spiteri, the production’s composer and musical director, says that the focus will be chiefly on the tenant of freedom and the lack thereof.

“With this, we are not just referring to Dimech’s physical incarceration or to the way the Maltese people lived under British rule”, Spiteri explained. “Dimech speaks about pure enlightenment, hence, Ix-Xirka tal-Imdawlin. He continuously asks his readers to wake up and start thinking with their own minds, to stop acting like children and do things because they want to and not because they are told to.

“Maltin! Maltin! Hemm bżonn li ma nibqgħux trabi iżjed,” he wrote in his paper Il-Bandiera tal-Maltin. He preached self-worth: “il-Maltin darrewhom jaħsbu bħal ilsira, iżommu ruħhom b’agħar mill-istess bhejjem.” The key to liberation for Dimech was education and culture. He has been reformed in prison thanks to the books he read and, thus, he wanted to give this back to the community, he continued.

Spiteri went on to call Dimech “the reformed reformer”, stating that he wanted to build self-worth by building up what was culturally Maltese. 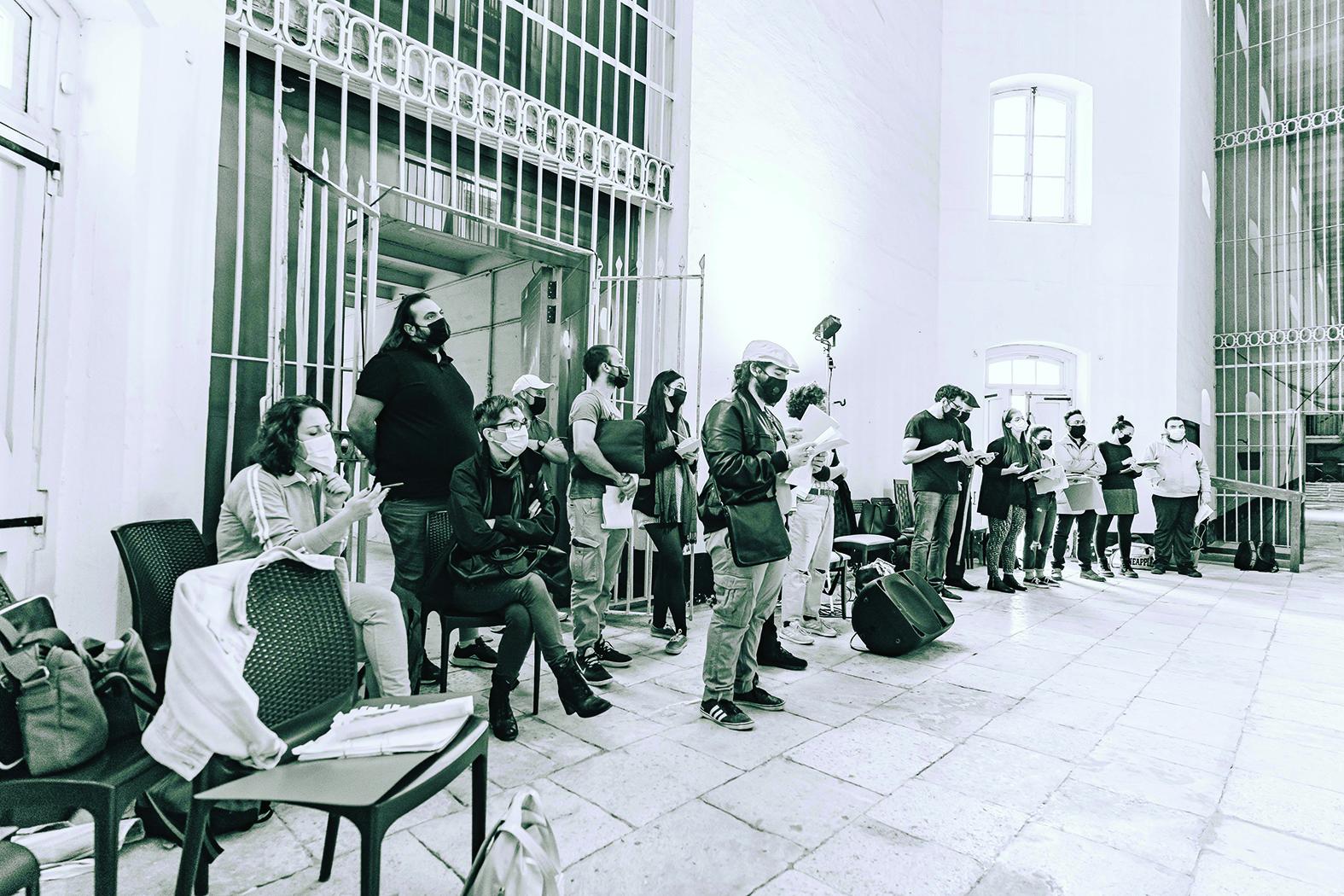 “That is why he helped to improve the Maltese language both grammatically and in its social importance. All these aspects reach their climax at the end of Dimech’s life where we meet a metaphysical form of freedom which Dimech expressed in his last writings, which, ironically, got written in a military camp in Egypt where he spent the last days of his life in exile. Dimech’s life in our work is just a canvas on which we drew most of the different ideologies that he writes about in his books.”

Victor Jacono, the production’s director and scriptwriter, said that the play will look into Dimech’s youth and will seek to channel his personal and social frustrations through crime and even murder.

“Dimech was a man reformed by education and a vision to free himself and a whole nation from an oppressive mindset, as well as the oppressing authorities of church and colonial rule,” reiterated Jacono.

“The production will look into how Dimech was a man who fought corruption and served as a political activist and educator whose search for social, political and spiritual enlightenment spanned a lifetime, certainly up to when he was struck down by a stroke in Egypt and as a prisoner  waiting in vain to be allowed back home from exile.

“We shall be exploring each of these facets in different spaces of the old military prison in Corradino, using the idiom of musical theatre. As the title suggests, the site of the performance was a main source of inspiration for this work, a metaphor of Dimech’s struggles and the foremost value he sought to defend, namely that of freedom,” Jacono continued. 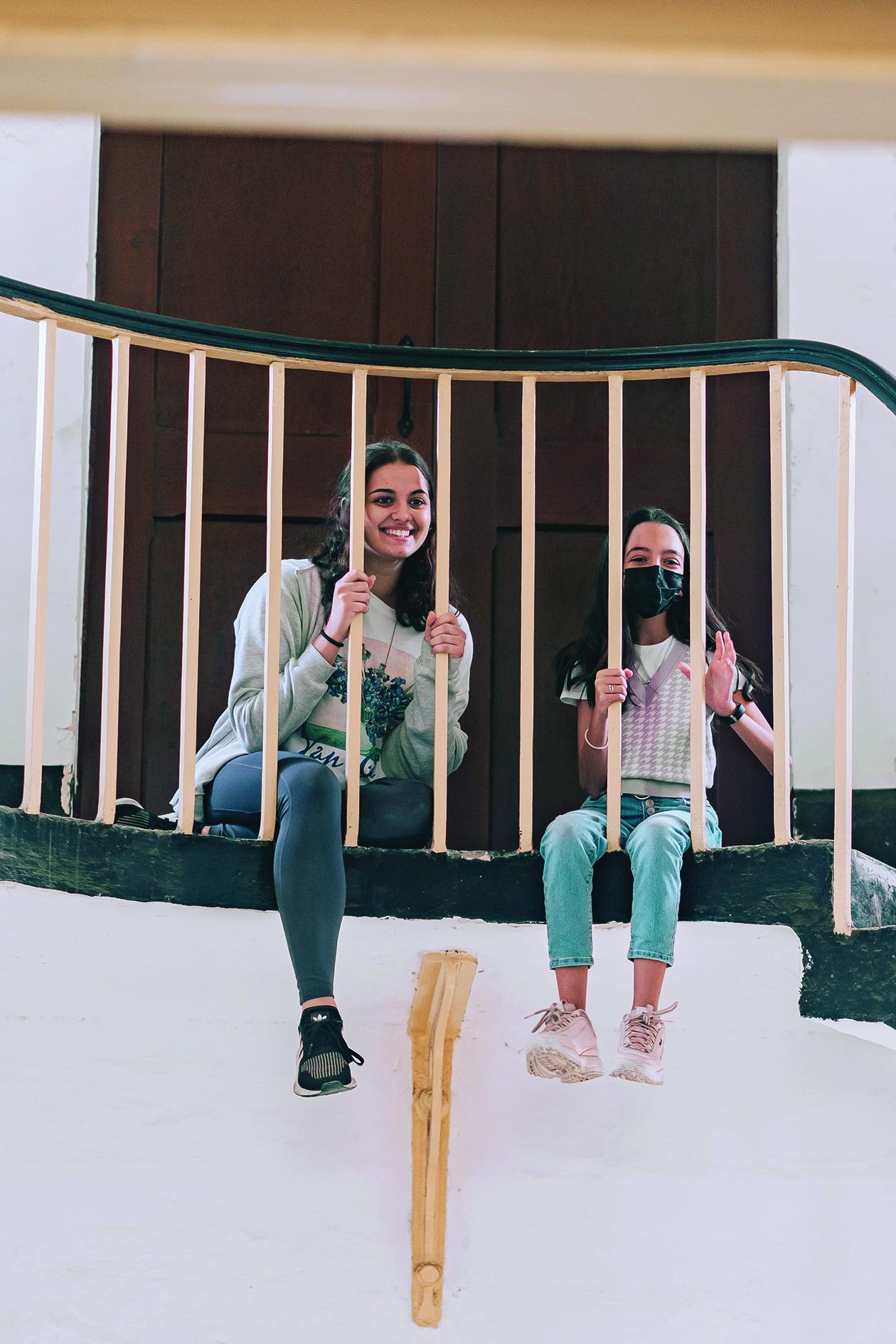 Given Dimech’s extensive fight for liberation of thought and freedom from oppression, it is only natural to wonder what Dimech would be speaking out against in contemporary Malta were he alive today. Posing this question to the two directors, Spiteri said that the audience should ask themselves that question at the end of the performance.

“It is one of the jobs of the artist to make an audience ask questions and not to answer them,” Spiteri replied.

“We live in a generation of statistics and charts. Our social media is bombarded with Top 10 ways to achieve this and that, best five appliances or gadgets and so on and so forth. Isn’t that a way of thinking with the minds of others? Doesn’t this stop you from experiencing things yourself?

“If we had to apply this to politics, for example, isn’t hardcore or hereditary politics a way by which we think with other people’s minds, be it of family or friends,” Spiteri went on.

Echoing Spiteri’s sentiment, Jacono maintained that the work they are presenting is enough to highlight the relevance of Dimech’s struggle and example for the present.

“I think today Dimech would be condemning all forms of oppression and corruption. He would be reminding us of our responsibilities as citizens of a democratic republic of what that means in principle and practice. He would be speaking in favour of an education that frees the mind and spirit rather than just servicing the labour market.

“He would be urging all, irrespective of gender, origins and creed, to roll up our sleeves and contribute actively and vigorously towards improving our society and the environment we live in”.

Speaking about the musical element within the production, Spiteri said this is intrinsically entwined with the theatrical element since, in musical theatre, every song is part of the plot, making the two elements impossible to dissect. 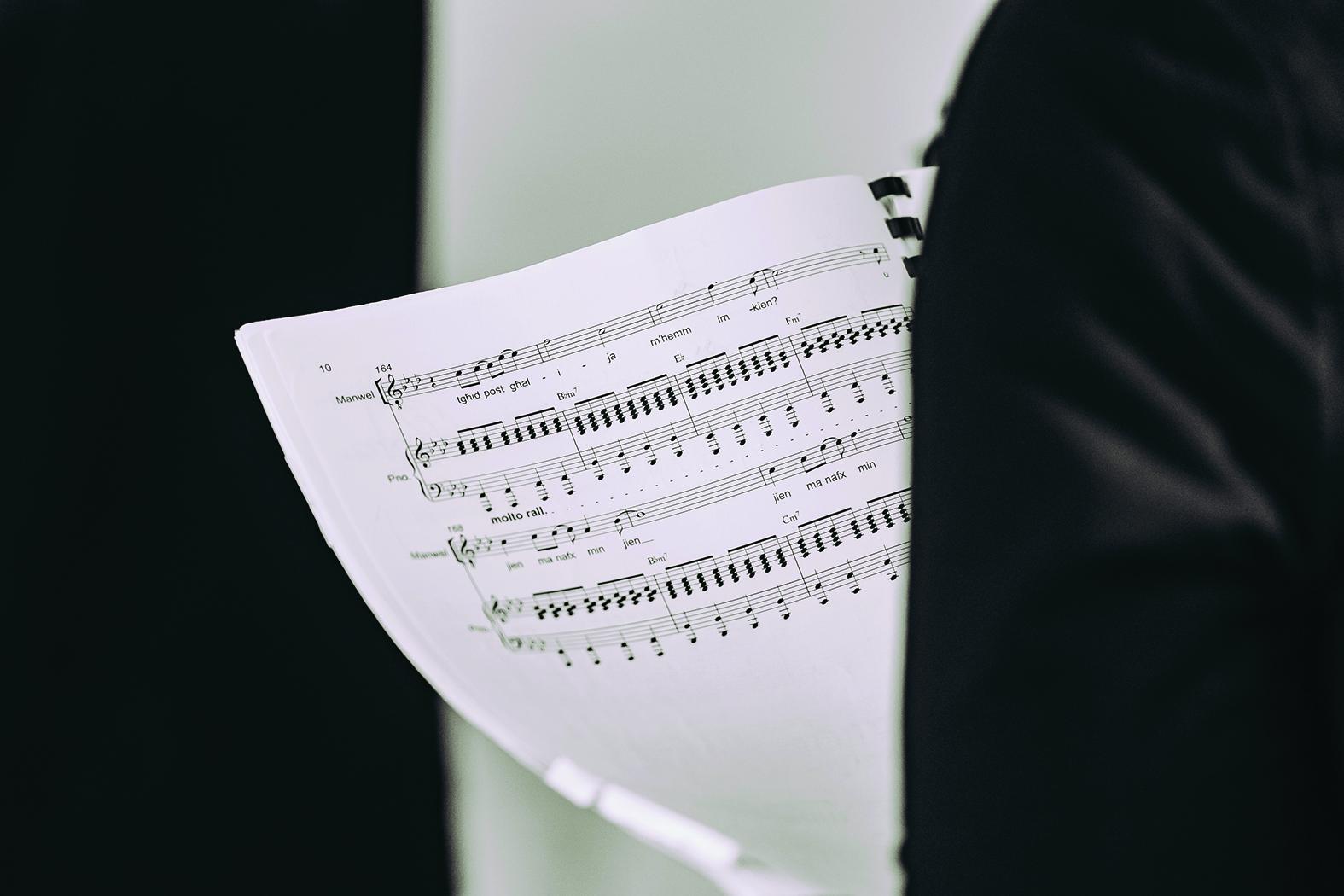 The performance will include music composed and directed by Kris Spiteri.

“While composing the piece, I tried my best to portray the emotions of the scene or the character and, at the same time, help the plot to evolve. Victor and I wrote the story/synopsis first. That way we could visualise the journey,” Spiteri explained.

“After that, I started composing the songs with dummy lyrics which Victor eventually changed to what they are today. This process is not as easy as it sounds but I must admit that Victor and I challenged our work to a point that, for one scene, we wrote five to six versions of a song and its lyrics from which we eventually chose one. This is normal procedure for musical theatre pieces,” he continued.

Spiteri explained that he did not choose a single genre to envelope the whole work, although he admits that, in some pieces, such as the opening of the show, he tried to imagine a sound which grounds itself in the Maltese idiom.

“Sonically, every character has a motif. At times, this motif is thematic and, in other times, it’s just the use of a particular instrument or sound. I consider this work as being a cycle in which we start and finish in the same place but with more answers or more questions,” he concluded.

In turn, Jacono said he finds the music and songs are “beautifully integrated within the dramatic text”.

“Each song takes on a different style and has a different feel to it. In each part of the work, Kris managed to find a very specific musical idiom that strongly conveys the events and forces we wished to portray from Dimech’s life.”

The piece will take place at the old navy prison in Corradino where audiences will be invited to walk around the site-specific theatre during the performance.

Speaking about how this singular venue influenced the production from a musical standpoint, Spiteri began by saying this proved to be rather challenging. 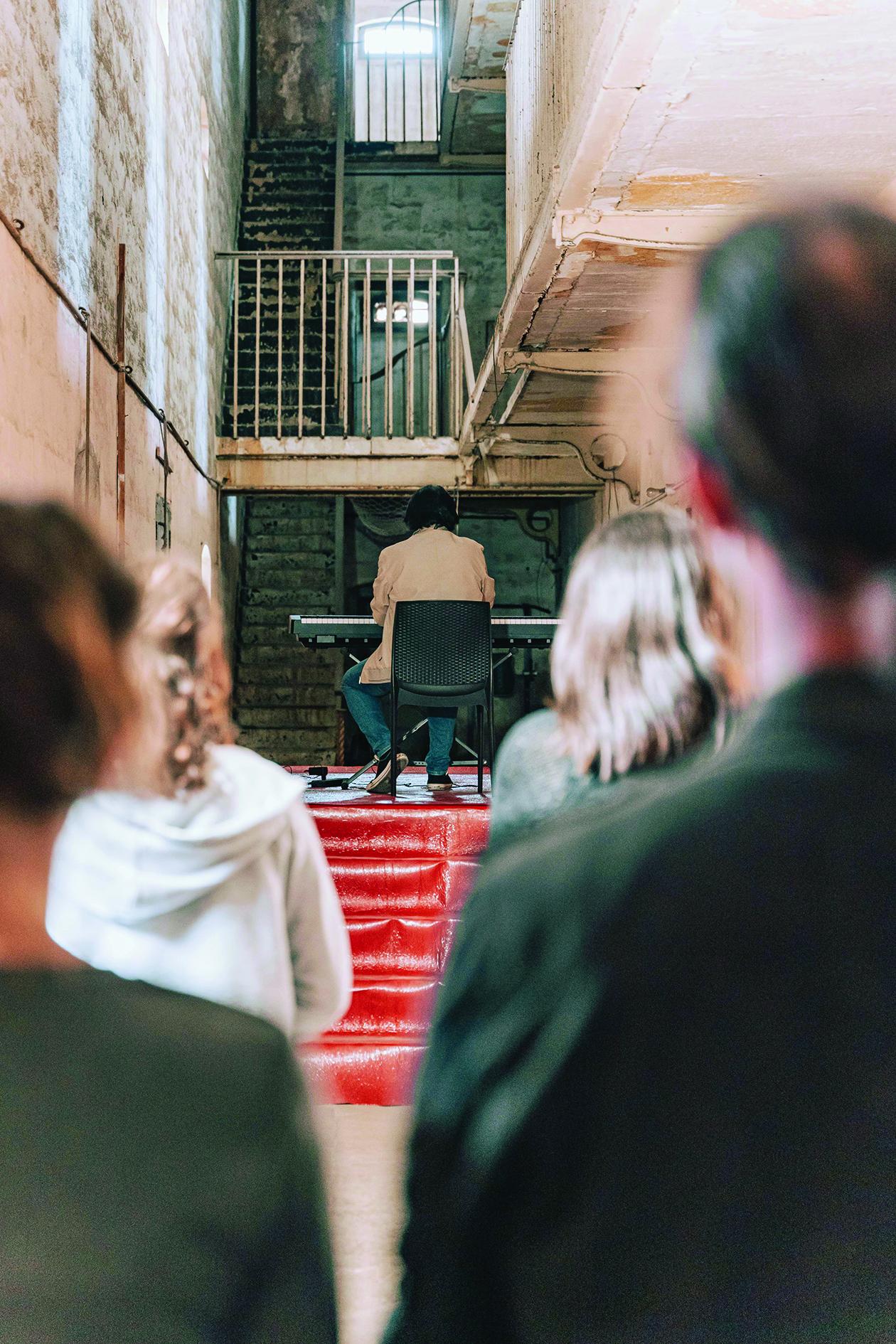 “It is a technical nightmare but the challenge was pleasantly taken by everyone involved. Writing a site-specific show always brings in pleasant and less welcome surprises. Musically, we had to record the band since the space was so limited.

“The band on the tracks are Robert Spiteri on drums, Eric Wadge on bass, Matthew James Borg on guitars and I played the rest. Matthew James produced these recordings and I wrote the arrangements. The cast will be singing live from different places in the prison.

“I think one of the musical achievements of the show is that the audiences will, at times, feel surrounded by the sound, whereas, usually, in a theatre, it’s pretty much unidirectional.

“Sergio Costa, our sound designer and technician, also had to treat certain sections of the prison so that the sound is clear. The high ceiling makes it difficult to contain the sound. I tried my best to compose for the place but this is not always possible due to certain emotions that a song needs to portray.

From a scriptwriting and directorial perspective, Jacono maintained that the site can be seen as a metaphor of all that keeps us imprisoned in life, both within and without.

“Freedom comes with a sense of social responsibility and engagement. Therefore, apart from aesthetic pleasure, this site-specific performance can provide us with a space to contemplate our sense of freedom and our level of engagement with life.”