A play featuring a character inspired by murdered journalist Daphne Caruana Galizia has been cancelled, Teatru Manoel's management board said on Friday.

Ix-Xiħa, directed by Mario Philip Azzopardi, had attracted mounting criticism for its fictional depiction of Caruana Galizia and twisting of her words.

Azzopardi then wrote on Facebook that the play had been cancelled, attributing that decision to "threats of violence", without elaborating. When contacted, Azzopardi said he would not be speaking to Times of Malta about the matter.

In a statement, Teatru Manoel's management board said it had unanimously decided to scrap the production due to outrage surrounding it.

"Following public outcry and because the Teatru Manoel Management Board is receptive to sentiments among its audiences and within the artistic community, it was deemed appropriate to cancel the production with immediate effect," it said.

"Cancelling this production is the right thing to do. We are Malta’s National Theatre and we have a responsibility to the artistic community, our performers, and our audiences."

The management board's statement made no reference to Azzopardi's claims of "threats of violence".

Its decision was communicated after sections of Malta's acting community called for a boycott of the national theatre, in protest against its decision to stage the production.

Ix-Xiħa sparked controversy after it emerged that not only would it feature a character inspired by Caruana Galizia but it would also include the journalist's final words - "the situation is desperate". The script was leaked by blogger Manuel Delia on Thursday, describing it as "spiteful, full of hate, prejudice, and disturbingly incurable visceral violence".

The script does not mention Caruana Galizia by name but there are several references to the blogger.

Several theatre practitioners have taken to social media saying they will boycott the play as well as the national theatre unless the production is shelved.

Azzopardi initially acknowledged that "some actors" had decided not to take part but insisted that the show would go ahead. In a later post on Facebook, he said that the play had been cancelled. 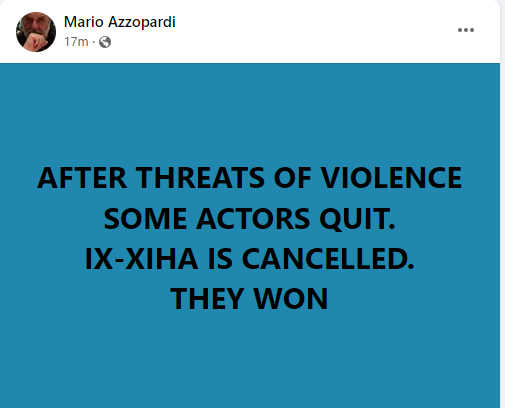 Ix-Xiħa was scheduled to be performed at the Manoel Theatre at the end of this month and May.

The production is backed by Stagun Teatru Malti as well as Teatru Manoel.

Azzopardi said he had "no problems" with artists' calls for a boycott but said he was considering legal action against those who leaked the script.

"Of these people boycotting and doing all this silliness, I ask, how many were part of the Charlie Hebdo campaign?" Azzopardi said earlier.

The Je Suis Charlie slogan was adopted by thousands from around the world in support of freedom of speech and freedom of the press following the 2015 shooting at the offices of the French satirical magazine.

Both Ix-Xiħa and Min Qatel lil Daphne?, also by Azzopardi, had been initially shot down by the Manoel Theatre board, after being deemed inappropriate within the local scenario. The plays were part of a €20,000 deal funded by the Finance Ministry to encourage the staging of Maltese-language plays.

The Ix-Xiħa script was referenced in the murder public inquiry with Azzopardi defending satire when he appeared before the board.

Matthew Caruana Galizia, the victim's son, weighed into the debate with a tweet: "Believable this is his (Azzopardi's) work. Unbelievable that it's being staged by our national theatre and paid for by the public."

Before the decision to cancel was taken, a group of some 20 artists had come together to boycott the play as well as the Manoel Theatre. Artists behind the boycott said they had only just started collecting signatures.

Director and actor Philip Leone Ganado said: "The play is from the same writer who, even before her murder, pitched a different script called Min Qatel lil Daphne Caruana Galizia that was to end with her "choking on her own bile". There are no words."

The artists said they will also be calling on the theatre to commit to a review of the selection process as well as to appoint a new artistic director.