The maritime industry is already the most energy-efficient mode of transport of goods and people. This efficiency results from the critical mass it enjoys – transporting 23,000 containers at one go, on a single ship.  Shipping gives the lowest emission cost per ton mile, so therefore, the carbon footprint of transporting, say, a shoebox is much smaller if transported by sea as compared to road or other forms of transport.

For this reason, shipping already transports over 80 per cent of world trade in tonnage terms, but if a larger proportion of traffic continues to be shifted onto waterborne transport, that, by itself, will make this mode of transport even more efficient.

While this gives scope for expansion in the maritime industry, the growth the industry wants is of the green and sustainable type, not merely because it is being expected to do so by international regulatory frameworks and ESG considerations but because the industry itself is a victim of grave  climate change consequences. Rising sea and air temperatures, shifting sea levels and the frequency of extreme marine events like tropical storms and cyclones are most devastating to the operations of the industry.

Clearly, there can be little doubt that the industry’s chances of achieving its carbon-neutral ambitions without the adoption of technology would be very slim, so the road ahead is, indeed, a “twin transition”.

The critical mass and sheer magnitude associated with the industry serves as a double-edged sword when it comes to progress in achieving environmental targets.

Ships, on average, take a minimum of three years to build and have an average lifespan of around 25 years. The cost of investment (around €130 million) for a new container ship is not comparable to the capital outlay of a few thousand euros for any road-going vehicle.

Moreover, the industry is vast and diverse, and extensive coordination is required between all the various components in the industry and all the different countries they take place in. Key stakeholders besides shipowners here are charterers, shipbuilders, port operators, port services, navigation control, fuel and bunker suppliers and several others.

Indeed, advancement in research into new alternative fuels needs to be coordinated with stakeholders in the fuel distribution network, builders of propulsion systems, training institutions, lawmakers, insurers, financiers and others.

Needless to conclude, therefore, that the magnitude of the decisions is higher in the maritime industry compared to other modes of transport and the risks are obviously higher.

These challenges have been mentioned in the interest of context as opposed to justifying any calls for a status quo. In fact, ongoing research has been taking place and continues to take place in order to find new engineering and digital solutions to render the maritime industry more digital, autonomous, better integrated and, above all, less polluting.

The industry is already implementing numerous breakthrough technological and operational measures, such as slow steaming, weather routing, contra-rotating propellers and propulsion efficiency devices, which can deliver breakthrough advancements towards lower emissions and fuel consumption. These developments evidence the fact that the maritime industry is serious in implementing its transition towards a digital and carbon-neutral future.

To start with, it is interesting to note that 2021 saw an annual record for orders placed on new ships in just the first eight months of the year. While this development augurs well in terms of the pace of fleet modernisation, it must also be stated that the effect of orders placed in 2021 will not be felt before the three-year lag it takes to commission a new ship.

Further gains in the pace of fleet modernisation remain constrained by the fact that there are fewer shipyards around the globe today (120) than in 2008 when the previous record was set (around 300).

In 2017, in fact, CMA CGM, the leading worldwide shipping group, signed a contract with a Chinese shipbuilder to produce nine LNG-powered ships for a combined cost estimated at US$1.2 billion. One of these ships– the largest LNG-powered vessel ever built − the Jacques Saade with a capacity of 23,000 TEUs and measuring 400m in length − commenced commercial operations in September 2020 and immediately started operating on the Malta route. 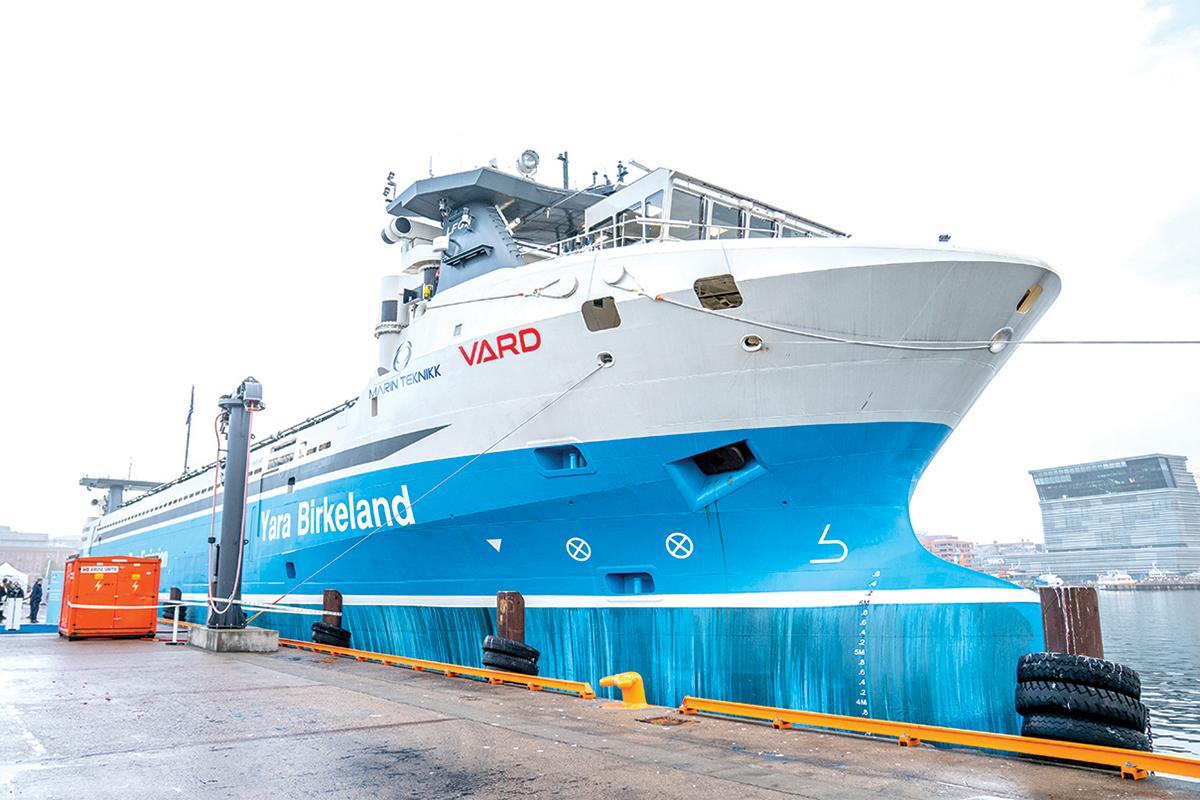 This development had positive knock-on effects on terminal operations in Malta. In order to accommodate the Jacques Saade, in fact, the Malta Freeport invested €20 million in six new German technology megamax quay cranes which, besides the necessary stacking capability, are more energy efficient and less noise polluting.

Besides, the Freeport recently invested in separate technologies that optimise job distribution to terminal tractors and the efficiency of rubber tyre gantry jobs, which reduce idling, undesired truck turnarounds and container rehandling.

Moreover, through a recently announced development referred to as ‘The Grand Harbour Clean Air Project’ at a cost of €50 million, Infrastructure Malta is investing in a ‘shore to ship power’ project that will allow cruise liners and eventually ro-ro vessels to switch off their on-board power generation plants and plug in to shore-side electricity points to power their on-board services.  This project complements exhaust gas cleaning systems (commonly referred to as scrubbers) which is equipment installed on vessels to entrap plumes from the main engine funnels before reaching the air. The scrubbers turn the gases into liquids which are treated before they are disposed of.

All such ships are installed with pieces of hardware that read data referring to vessel positioning, speed, RPM which is then transmitted to a central node that aggregates information gathered from all ships. The node then uses AI and complex algorithms involving external data related to forecast weather conditions, tides, currents and traffic to suggest alternative routes to the different ships.  The platform helps to reduce operational costs on fuel and maximises fuel-efficiency and emission control.  The system also optimises planning at ports giving almost perfect estimated times of arrival.

Research has also resulted in the development of Azipod electric propulsion systems that do away with a fixed rudder system on vessels and use a 360 rotating propellor to steer and thrust simultaneously. This type of propulsion is integrated with innovative bridge controls, sensors, digital reporting and automation and propulsion technology. As a result, the vessel achieves around 20 per cent less fuel consumption and emission control.

Although electric power has its limitations for maritime applications in terms of power and range capabilities, new technologies in green dynamic positioning systems can be installed on certain categories of vessels to optimise fuel consumption of generators and thrusters. As a result, a vessel may sail more efficiently and save fuel by switching completely to battery power.

The dynamic positioning system also enables the vessel to operate more silently and to remain in position without moving, allowing certain delicate operations to take place even in offshore rough conditions.

Use of alternative fuels

There is no denying that the game changer in reducing the industry’s environmental impact even further would be via a stronger shift towards renewable and alternative fuels. Scientists around the world are, in fact, testing new propulsion methods capable of replacing fuel oil in ships. However, according to a study by researchers at the University of Manchester, there is no widely available alternative fuel that can be used for powering ships. Some of the alternative fuel options analysed have the potential, but only if key barriers can be overcome.

Heavy fuel oil (HFO) is increasingly being replaced with low sulphur diesel which is widely available but this is far more expensive compared to HFO and is still a fossil fuel. As already mentioned, liquid natural gas (LNG) is gradually making inroads into the industry and in the process. Although LNG cannot be considered an alternative fuel (because it is not renewable), it reduces greenhouse gases (GHGs) by 20 per cent when used to power ships and produces no particulate matter.

For this reason, LNG provides a viable solution for the long term. LNG’s GHG performance represents a major step forward when compared to conventional fuels. On the other hand, its adoption is hampered by limitations in distribution channels. While it is readily available in bulk at circa 150 locations worldwide and there are huge bulk LNG infrastructures, including regasification terminals and liquefication plants globally, LNG-powered ships are still unable to refuel in and around Malta.

Further afield, the industry is experimenting with ammonia which is made up of nitrogen and hydrogen, so it produces zero emissions after burning. Besides, ammonia is safer and easier to store than LNG and LPG and is non-cryogenic, however, significant limitations with respect to sourcing and on-board storage still remain.

Nevertheless, ammonia continues to be studied seriously while being piloted on vessels. One such pilot conversion powers a vessel with a 70 per cent ammonia blend as part of an ultimate objective to achieve complete operation with ammonia and with a minimum ignition fuel requirement.

Lastly, one must also consider the advances in hydrogen as the most basic renewable fuel generated by electrolysis. Hydrogen is carbon-free and generates the lowest emissions from combustion. It is safe in handling, transport and storage processes, however, hydrogen needs to be compressed to 700bar or liquefied to -253⁰C while handling. Wider usage of hydrogen as a fuel to power ships is, therefore, hindered by critical supply and distribution issues.

That said, heading towards 2050 and the related carbon-free objectives, hydrogen and ammonia are considered as the climate-neutral ship propulsion system of the future, especially because retro-fitting conversions projects on existing ships are possible, even in Maltese yards. These alternative fuels are perceived as key contributors to shipping’s future energy transition for implementing new environmental-friendly technology on both existing vessels and even on new builds.

In conclusion, it is more than obvious that much more research and development and investment will be necessary in the coming years to allow the maritime industry to address and respond effectively to the current and future climate and environmental challenges, while taking into account a safe implementation of technologies and concepts.

It is equally clear that in proceeding in its journey towards the green and technology transitions, the maritime industry requires the right dose of encouragement from the authorities, in terms of targeted finance and resource support.

The authorities, particularly the EU, must also ensure that implementation timelines are aligned with competitiveness considerations. If these safeguards are firmly in place, the industry is optimistic and enthusiastic about adapting to the new environmental realities through the adoption of innovative, climate-proof technologies that will allow it to fulfil its carbon-neutral ambitions.