A protest at Comino’s Blue Lagoon risked ending in a physical confrontation on Saturday morning, as activists, deckchair operators and beachgoers came face-to-face.

More than 100 people answered a call by Moviment Graffitti to descend on the Comino bay to protest the rampant commercialisation of the Blue Lagoon. It is the second such protest of the summer, with activists having cleared the bay of deckchairs and umbrellas in June.

Protesters say that commercial interests have overrun Comino and are insisting on deckchairs and umbrellas being restricted to 30 per cent of the Blue Lagoon, with operators only setting them up when asked to by a paying client.

Their other demands include:

Operators had already laid out a number of deckchairs and umbrellas on the quay by the time the protest began on Saturday morning.

Things grew more heated as the event got under way and more umbrellas were laid out and activists moved to remove them.

Times of Malta witnessed one woman physically try to stop a protester from removing an umbrella, resulting in a tug-of-war between the two.

Speeches were interrupted a number of times, as activists and beachgoers argued. Police officers then stepped in, taking the side of beachgoers and deckchair operators.

As tensions mounted, Moviment Graffitti coordinator Andre Callus got into a heated argument with the officers. As they argued, activists around them chanted "il-baħar, ix-xatt, Kemmuna ta kulħadd' ("the sea, the beach, Comino belongs to everyone").

One woman who was seen arguing with protestors about an umbrella she had hired told Times of Malta she was disappointed by the way things unfolded.

"It's upsetting. What they did to us is the opposite of what they are preaching. I also have a right to be here on the bay with my children and family," she said. 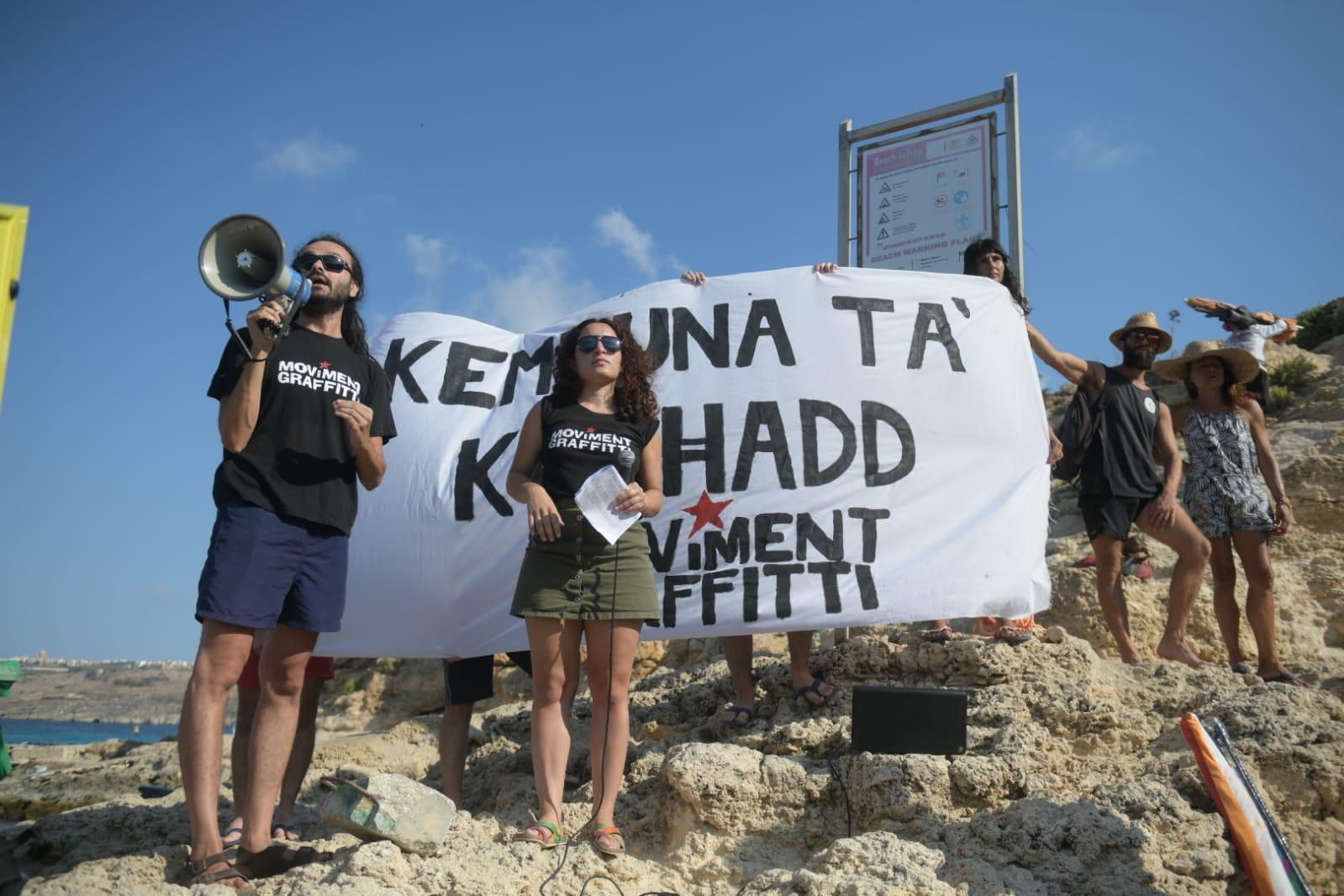 But activists said the people with kitted out with umbrellas on Saturday morning were sent there by the operators, to spoil the protest event.

Andre Callus said that the protest was an organised one, with a permit, and that the police therefore had a duty to ensure the protest area was cleared for the event.

“Despite that assurance, when we arrived we found a few of them. And they kept on adding more. Look at what power these bullies have,” he told the crowd as he stood behind a banner reading “Comino belongs to everyone”.

Callus alleged that beachgoers present at the Blue Lagoon had been planted there.

"We received information about this yesterday, and it turned out to be true," he said, as he made it clear that activists would be holding further protest events in Comino.

Comino’s Blue Lagoon is widely considered to be one of Malta’s most beautiful bays.

But the gradual encroachment of deckchairs and umbrellas, coupled with the ever-growing number of people visiting Comino, have made the Blue Lagoon a less enticing place to visit.

Authorities have in the past downplayed concerns about the bay – last year, Tourism Minister Clayton Bartolo repeatedly insisted that “Comino is not just the Blue Lagoon” – but matters reached a head last June, when activists led by Moviment Graffitti physically cleared the area of deckchairs and umbrellas.

Environment Minister Miriam Dalli has since said that a study that is being finalised will establish a “carrying capacity” for the island, implying that the government is seriously considering a cap on the number of visitors allowed on the island.