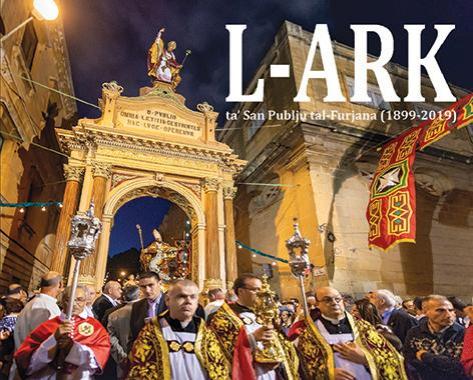 Just after 1am on April 27, 2019, the centennial triumphal arch erected in Floriana for the occasion of the feast of St Publius was set alight in an act of wanton vandalism that shows that human stupidity has hardly any limits. When the firefighters finally put out the flames at 3am, all that was left was a heap of burnt wood and four dark carcasses of cars that had been parked near it.

The destruction of this important cultural monument means that now only two other contemporary 19th-century arches survive, both in Rabat, erected for the feasts of St Paul and St Joseph respectively.

Made by the Rabat craftsman Francesco Spiteri and inaugurated in 1899, the three-storey-high arch became the pride of festa furniture for the Furjaniżi. It had already had a couple of close calls in the past. In 1905, it was heavily damaged in a storm, and it actually came near to destruction during World War II when the authorities were in a frantic search for wood to fire the Victory Kitchen ovens.

The magnificent Valletta arch of St Paul was apparently less lucky. The 79 pieces of wood that make up the Floriana arch were hastily hidden away behind a wall in the charnel vaults where they remained until 1974. But it was only in 1999 when, after extensive renovation, the arch was proudly erected again. 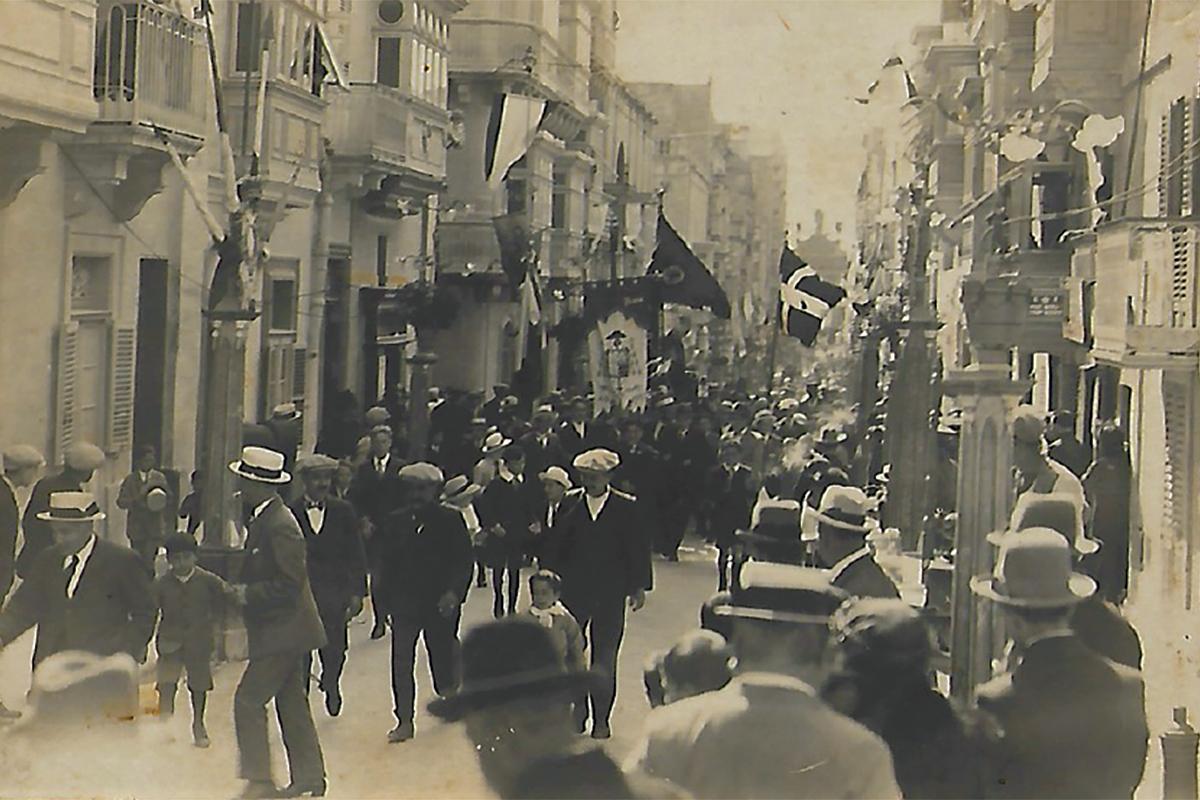 Gunlayer Street (Strada Miratore), Floriana, during the feast of St Publius in the 1930s. At the end of the street one can see the silhouette of the triumphal arch.

Several Floriana residents share their experiences of seeing the arch devoured by flames, including the archpriest, the mayor of Floriana, and others who were on the very spot minutes after the fire was started. The pictures showing the burnt remains are heartbreaking.

In Malta, the raising of triumphal arches was mainly linked with the grand masters. In his essay, Giovanni Bonello says the first recorded arch probably dates to 1538 under Juan de Homedes but the first solid reference to a locally erected arch concerns the two erected in Mdina and Vittoriosa to celebrate Ramon Perellós’ election. The Maltese architect Carlo Gimach won a European reputation as an arch builder, especially for the one built in Lisbon in 1708. Another local artist who built magnificent arches was Pietro Paolo Troisi. Other arches were erected to honour saints and even celebrate particular secular events during British rule.

Several Floriana residents share their experiences of seeing the arch devoured by flames, including the archpriest, the mayor of Floriana

Bonello’s generously illustrated contribution mentions other local arches and gives historical details about them and includes some unpublished photographs and sketches. 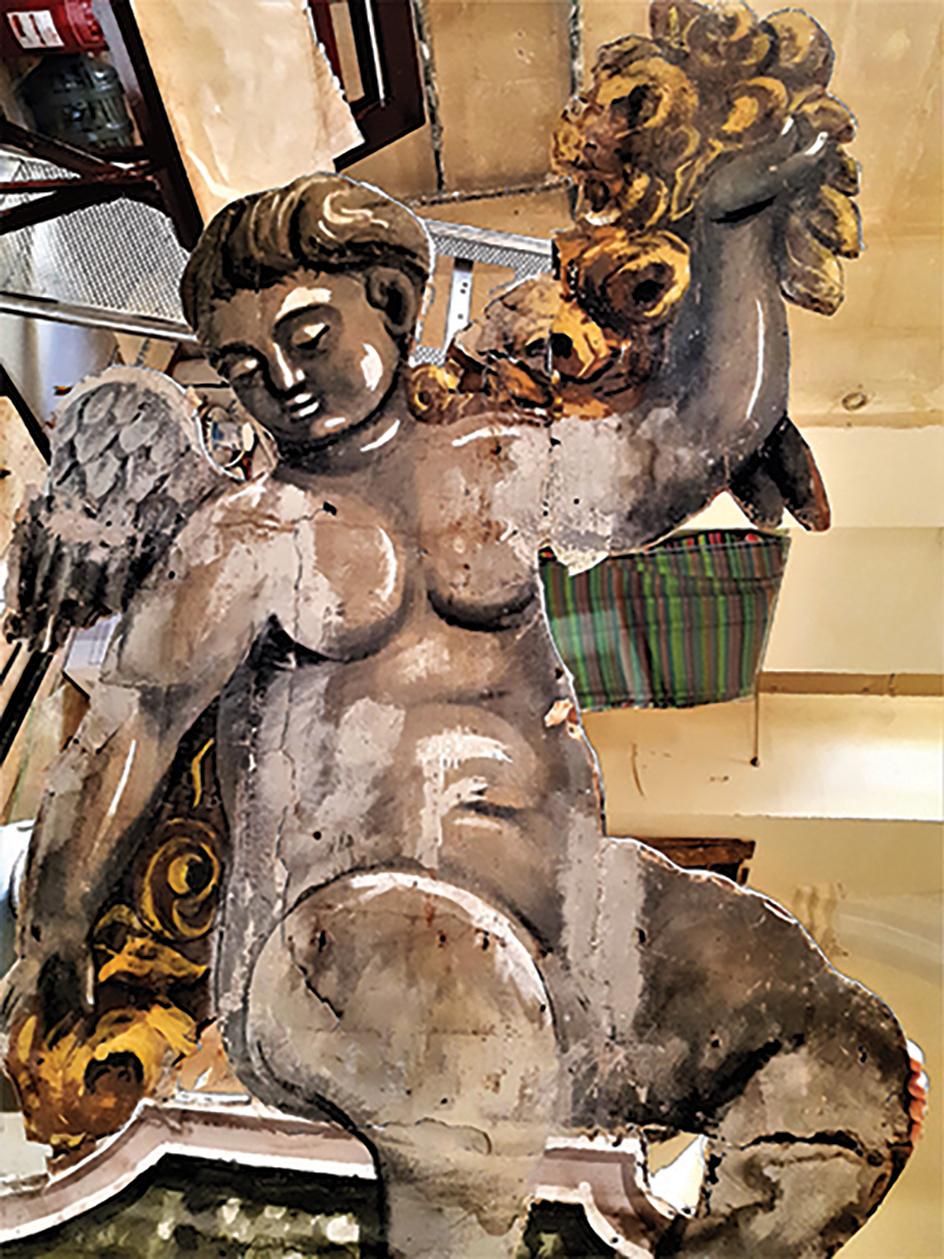 A fragment from an old ceremonial arch that used to be rigged up in Malta and which was found in the stores of the Mdina Cathedral Museum.

Martin Camilleri gives a detailed account of the vicissitudes of the arch from its inauguration, adding several anecdotes that have accumulated over the years.

In another contribution he expands at length about the local tradition of the use of arches in the various religious feasts in Malta and Gozo, ranging from the elaborate to the simple. This is an important historical and pictorial record of the arches of the Maltese islands. One of the most majestic in neo-gothic style that used to be erected in Senglea was destroyed during the war.

In an interview with Freddie Tonna, master craftsman Emanuel Cini, whose work can be admired in various churches and clubs in Malta and Gozo, comments about how the designers of the arch carefully respected the proportions of the Corinthian Order. His description is noteworthy for its precise architectural details but also for the actual technical terminology used in the process. He is particularly impressed by the arch’s gwarniċun, which he calls “a proper feast of design, all in proportion at its best”. 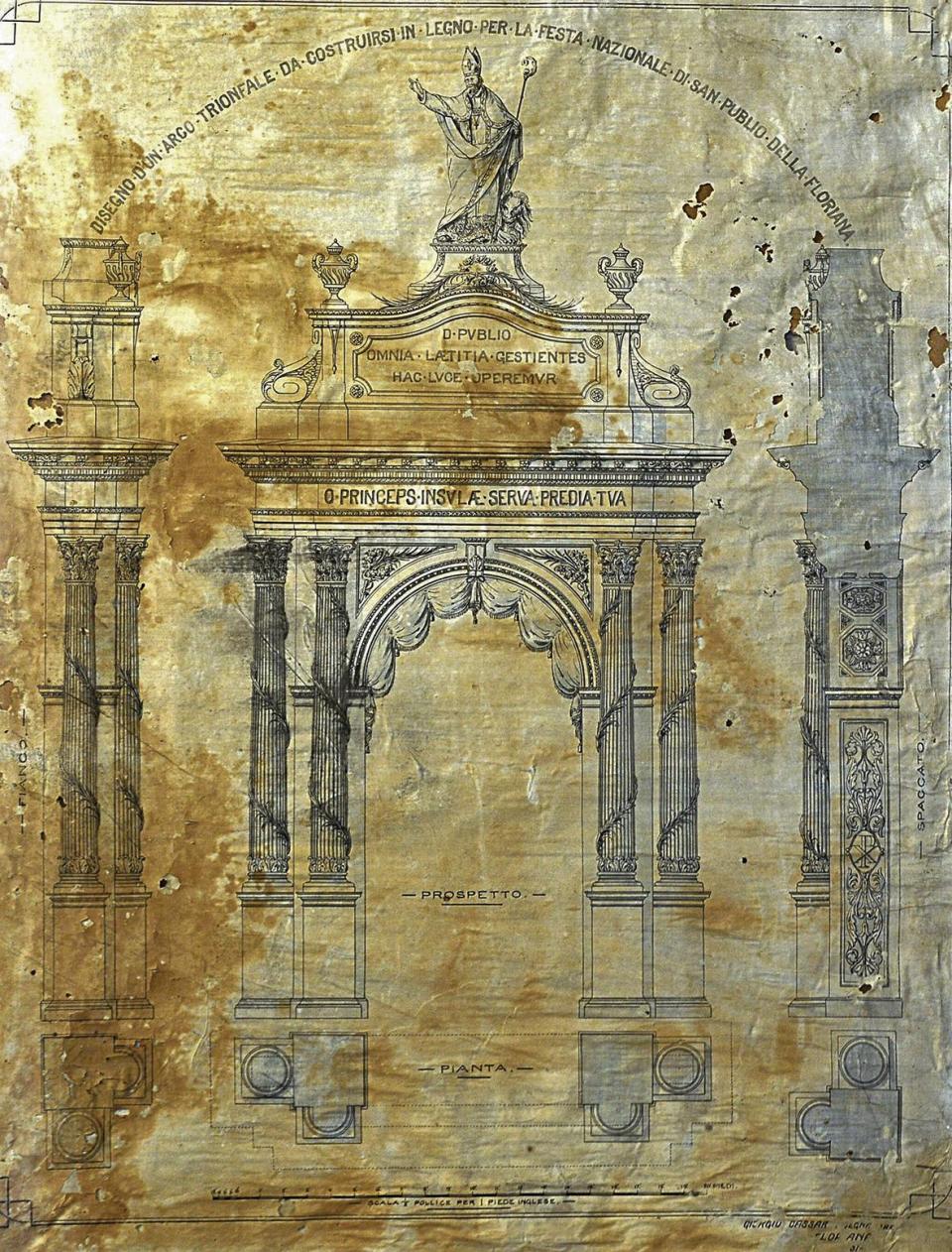 The original drawing of the triumphal arch of St Publius in Floriana, which was made by Giorgio Cassar in the 1890s.

Dutch historian Adrianus Koster reminisces about his Floriana experiences that go back almost 50 years, and expresses his shock on hearing the sad news.

The last section of the book deals with the efforts to rebuild the arch, including the financial grants received and money raised from generous donations. It will take three years to remake the arch, which is expected to cost €100,000 and has seen the entire community rise to the occasion.

The book, very profusely illustrated, records the most significant events in the arch’s recent history. It also includes the text of the cantata Ħodon Fjuri lil San Publju by Oliver Friggieri, one of Floriana’s outstanding sons, which was performed again in January 2020, 10 years after its first performance, to raise funds.

The editorial board of Il-Furjana has meanwhile announced that it intends to publish a book to coincide with Floriana’s 300th anniversary which will be celebrated on May 9, 2024, consisting of papers by various local and foreign authorities and academics.

Profits from the sale of the 222-page hardback L-Ark ta’ San Publju tal-Furjana will go towards a fund to finance the rebuilding of the arch. Readers who wish to obtain a copy may call 7933 9649.