On March 28, 1938, Konrad Henlein, the leader of the Sudeten German Party in Czechoslovakia, met German Chancellor Adolf Hitler during which the former was instructed to put pressure on the Czech government regarding the rights of the three million ethnic Germans who lived mostly in the Sudetenland area of the country. Czechoslovak President Edvard Beneš resisted, and on May 19 he initiated a partial mobilisation in response to a possible German invasion. On May 20, Hitler presented his generals with a draft plan of attack on Czechoslovakia.

The governments of France and Britain were intent on avoiding war with Germany. The British government demanded that Beneš request a mediator. On July 20, French Foreign Minister Georges Bonnet told the Czech ambassador in Paris that while France would publicly declare its support to help the Czechoslovak negotiations, it was not prepared to go to war over the Sudetenland question.

In Malta, a threat was being felt, be­cause if Germany was to invade Czechoslovakia, Italy might join them and attack the island. At this time, Malta was being governed by Governor Charles Bonham-Carter. During his stay in Malta he kept diaries in which he shared his thoughts about the situation in Malta and the fear of an outbreak of war at that time. In 2004, John Manduca edited and published the Governor’s diaries in a book entitled The Bonham-Carter Diaries 1936-1940. The following are excerpts from Bonham-Carter’s diary of 1938:

“Hitler’s speech of Monday [September 12, 1938]… appeared unpleasantly threatening, and when this was followed in the evening by the news of the ultimatum by the leaders of the Sudeten Germans to the Czech government, we felt the position was really as bad as it could be.

“The danger to Malta is very slight unless Italy were to join in with Germany, and I hear this morning reports that the Italian armament factories are working on only 30 per cent of full production and are doing no more than replacing their losses of material in Spain and Abyssinia.”

The Governor’s diary continues to comment on the situation in Malta in case a war broke out and Italy remained neutral: “The food situation is quite satisfactory, if a war were to break out, and Germany were to be the enemy, not so, of course, if Italy were to join them. For the civil population the reserve of wheat and flour varies between three months as a minimum and six months as a maximum, and one could safely say that they could at any time be sure of decent rations for four months. The position therefore is not bad.”

On September 13, after violence and disruption in Czechoslovakia ensued, British Prime Minister Neville Chamberlain asked Hitler for a meeting to find a solution to avert a war.

In Malta, a threat was being felt, because if Germany was to invade Czechoslovakia, Italy might join them and attack the island

In Malta, the preoccupation of the Governor was quite evident at this time. By September 21, the Mediterranean Fleet was stationed at Alexandria. The sea defences, consisting of motor torpedo boats and submarines, returned to Malta and the boom defence was prepared for any eventuality. He gave an order to man the coastal guns at Fort Tigné, Fort St Elmo and Fort Ricasoli, which covered the boom defences each night. 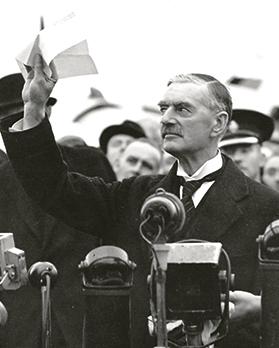 Chamberlain pictured on his return to the UK from the Munich summit, declaring that the piece of paper he was holding in his hand was an agreement that meant “peace for our time”.

On September 23, the Governor received a report saying that “...the Italians felt that the Italian Fleet was stronger than that generally appreciated and that their naval bases were all fully prepared for immediate action, which would be taken in the form of lightning attacks. There would be no ultimatum and no declaration of war...”.

On September 24, the heavy batteries, including the Royal Malta Artillery, moved to their war stations, as did the anti-aircraft batteries.

The Governor noted in his diary that although there was  “a feeling of immense relief” at Chamberlain’s announcement that he was to meet Hitler, Mussolini and Daladier, he added that he “had decided to carry on with all precautions till we hear there was some definite agreement reached. A telegram came from the Colonial Office stating ‘possibility of immediate emergency no longer hold’.”

A deal was reached on September 29, and at about 1.30am on September 30, 1938, Hitler, Chamberlain, Benito Mussolini and Édouard Daladier signed the Munich Agreement. The agreement said that the German army was to complete the occupation of the Sudetenland by October 10,

The agreement gave Germany the Sudetenland starting on October 10, and an international commission would decide the future of other disputed areas. Britain and France informed Czechoslovakia that it could either resist Nazi Germany alone or submit to the prescribed annexations.

Upon his return to Britain, Chamberlain delivered his controversial “peace for our time” speech to crowds in London, yet the agreement gave Germany de facto control over the rest of Czechoslovakia.

While acknowledging the agreement in his diary the Governor noted “we continued all precautions and only stopped services such as the issue of gas masks which could cost money without leaving any useful legacy”.

After the Nazi occupation of Czechoslovakia, Chamberlain immediately began to mobilise the British Empire’s armed forces to a war footing. France did the same. It was only a matter of time that war was to erupt when Germany invaded Poland on September 1, 1939, and Britain and France declared war on Germany on September 3, 1939.

Charles Debono is curator of the National War Museum.