Skyscrapers don’t belong in Malta and the Blue Lagoon is being overcome by day-trippers. Antonio Belvedere, architect of a new eco-friendly hotel for Comino, shares his vision and no-holds barred views with Fiona Galea Debono.

Antonio Belvedere uses terms like “horizontality”, “context” and “true moral obligations” when he talks about his firm’s design of a €120 million project for a new hotel on the island of Comino to replace the old one.

And given Malta’s track record, he is not surprised those words may ring hollow and be met with scepticism in a country that has been “challenged by development”.

But it is not just talk, the Italian architect assures. He is ready to share the detailed construction documentation for Comino Hotel & Villas to demonstrate that the project – an example of passive architecture – will translate sustainability on paper into reality.

He pledges minimal impact on the island and marine life – even on the night sky – with birds and geology considered.

And Belvedere, of Belvedere Architecture, insists its Zero-Net-Carbon commitment is not just a loose statement, but a “true moral obligation”.

Aiming for LEED Platinum certification – Leadership in Energy and Environmental Design – the Comino project by Hili Hospitality will use local forces to produce energy, reducing consumption by a calculated 70 per cent, compared to a similar hotel.

The objective is to drastically reduce the need to turn on cooling systems.

For this reason, it will be a hotel with no corridors, and rooms exposed on either side, while the reduction in interior spaces will reduce power requirements, Belvedere explains.

The project – 70 rooms and a cluster of 21 residences – will occupy the same area as the current property, but disturbed land will be reduced by at least 5,000 square metres. The regeneration and restoration to its original condition through waste recycling is another mainstay.  The old hotel was “extremely invasive and extensive, so elements must be removed, and the original topography reconstituted”, Belvedere says about what is essentially a “clean-up” operation. 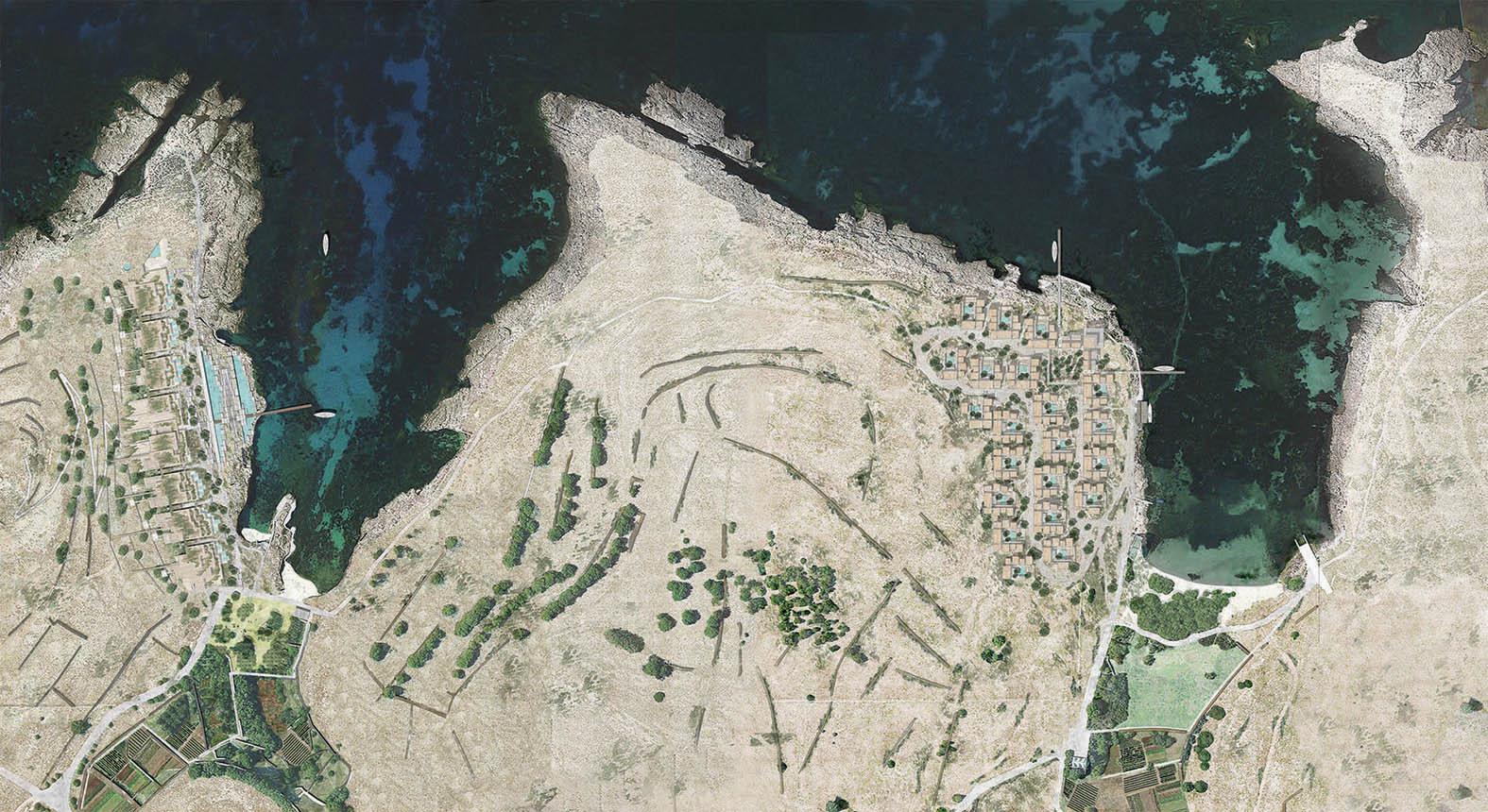 Comino Hotel (above) and village (bottom).

The village from the east.

Tennis courts will be uprooted, with demolition material reused to recreate as closely as possible the natural profile, be it garrigue or Mediterranean maquis, with their indigenous plants.  Even the shoreline must be brought back to its original state, with the former bean-shaped pool replaced by what would be “generated by the grain and fragmentation of the coast”.

Considering the project from a “horizontal” point of view, Belvedere says the villas’ heights will drop from two storeys to one to bring their scale in line with the island’s profile.

“This is not rocket science; nothing too sophisticated. It is just about listening, hearing, watching and thinking… to come up with something much closer to the island,” he says.

Comino is a “delicate” environment, he notes.

“It is like entering a china shop. You have to be careful how you move around and what you do,” Belvedere says of the fragility of the Natura 2000 site.

“This is not just a label. It comes with a huge responsibility not only for the designer, but also public authorities and the client,” he cautions, highlighting that the importance of listening to environmental NGOs.

“They know more than me about Comino and ignoring them would be a mistake. A project can be even better if they are listened to,” he says, adding that “Malta needs to return to a more peaceful and fair debate between authorities and NGOs”.

While Belvedere is responsible for the hotel and villas, he has also “felt the need to lend my thoughts to the rest of the island”.

Among his ideas is the replacement of a disused pig farm with floating photovoltaic panels, so vegetation can grow beneath, while Comino becomes self-sufficient energy-wise.

He has even embarked on an exercise to identify existing paths that offer “a complete sense of Comino” to prevent visitors from unnecessarily veering off to climb the hills and damage the garrigue. 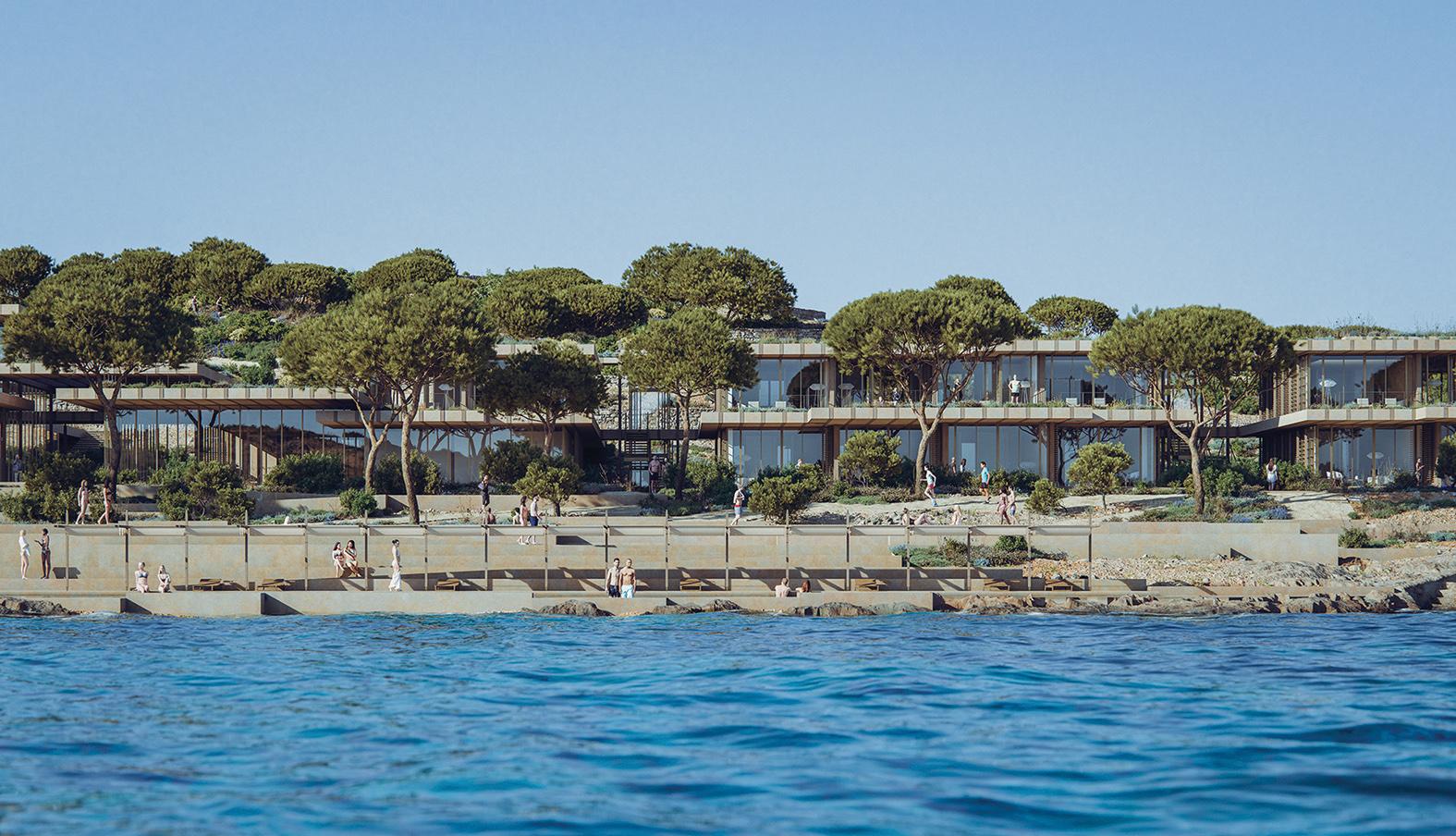 Belvedere is also concerned about the impact of 6,000 daily day trippers disembarking at Blue Lagoon and its many food trucks, stating “it is not right” and distinguishing between “the sacred and the profane”.

Sacred is what is built by nature – Comino – and that is why he has proposed floating pontoons and barges.

“When I talk about the process of subtraction, I am not trying to assume a philosophical position in terms of architecture. What I assume is that Comino needs to be rebalanced in terms of the coexistence of nature and people,” Belvedere explains.

Crossing back to the mainland, where the process of subtraction is not exactly in force, Belvedere, who designed Parliament Building as a former partner of Renzo Piano Building Workshop, fears the rush towards high-rise buildings is not necessarily about addressing a land shortage through densification, but more about “using them as symbols”.

Unlike Dubai, with skyscrapers used to create its identity, “Malta definitely does not need these and is the wrong place for them.

“It is a place to preserve the horizon; the way the island has been stratified by history.

“Malta has its own roots, and you have to dig deep into them.

“This is not happening… one can capitalise most on one’s future if it is in continuation with one’s roots,” he insists.

Understanding Malta’s limited space constraints, Belvedere is “not at all surprised that you are where you are right now”.

Developers have turned to quantity over quality, and this could also stem from a culture of laziness, due to pressure from the building industry, which leads to off-the-shelf options, he suggests.

Today’s architect is in a fragile position in the chain, he concedes. And in a message above all to himself, he says: “The worst we can do is just satisfy our ego and vanity.”

To the developers: “We have to build this world together. Do not only look at your pocket. Please take care of your community.”

Belvedere’s own major projects in an extensive portfolio are ranked in his mind primarily in terms of opportunities to improve the existing conditions.

“I am not looking to create a new experience; all we need is Comino. We need to create an experience that maximises it.”