At the National Statistics Office, we are so lucky to work in a veritable treasure trove of information, where economy, society, health, education and culture rub shoulders constantly. Their sub-divisions, and the organisation of data made possible by modern and sophisticated statistical processing, provide insights and comparisons on many levels.

The downside is that when one is immersed in this world of numbers, one tends to concentrate solely on the specifics and commitments of the productive area in one’s immediate responsibility. There is hardly ever the time to take a step back and observe the grand canvas: how one statistical output links up with another, and how this cross-fertilisation produces the most interesting facts of our life and times, how society has evolved through the years, and how it is rated globally.

For NSO staff, the chance to stand back to look at the holistic view came recently, in the shape of an unprecedented upskilling project for statisticians and statistical workers. The project is part-financed by the European Social Fund Operational Programme II (2014-2020), and its content ranges across all the domains covered by the NSO such that statisticians, methodologists and workers deployed in social statistics production learn about processes in economic and business statistics, and vice versa.

Sitting calmly in a classroom environment, NSO staff could study their tables and visuals on the big screen and make relationships among the variables. Moreover, just like when we dig out our school photos and draw circles around our faces, staff members could even pinpoint how and where their own individual work efforts fitted into the whole picture.

The European official statistics community will celebrate European Statistics Day on Sunday. This year’s motto is ‘Look at the facts’. Here, we shall look at the facts in just two of the domains covered by the NSO: Gross Domestic Product (GDP) produced by National Accounts, and a large-scale European Survey on Income and Living Conditions, abbreviated as EU-SILC, produced by Social Statistics.

These variables are very different, compiled from differing methodologies. Yet, at the same time, they can complement each other to produce an indicator or a comparison, therefore contributing to one of the classic linkages in the NSO collections.

What is the GDP? Its definition is the market value of all final goods and services (that is, those that reach the end user) produced within a country in a year – a bland statement which masks the detailed work the statistician working out the GDP must undertake, as well as the host of problems which must be solved in the correct way.

Three methods are used to calculate GDP; these are portrayed in the news release which the NSO publishes every quarter. Table 1 of the release shows the nominal GDP, which is the sum of quantities of final goods and services multiplied by their current market price.

Real GDP is the sum of quantities of final goods and services multiplied by their constant price, which means that the effect of price changes is theoretically removed. Table 2 shows GDP from the expenditure side. Let’s take expenditure on health – a subject close to all our hearts.

Last year, households residing in Malta spent €246 million on health, 29 per cent more than seven years ago. General government’s consumption expenditure on health was €689 million. Both these components and some others contributed to health-related consumption expenditure making up 7.6 per cent of GDP in 2018. At the same time, Table 2 records that what households collectively spent on transport was only €6 million less than on a traditional ‘staple’ – food and non-alcoholic beverages.

Hans Rosling, Swedish physician and brilliant public speaker, has a fascinating video on the link between GDP and health, where he traces how countries became richer, and healthier, throughout the hurdles of the past centuries – the Industrial Revolution, World War I, the Spanish flu pandemic of 1918, World War II, independence from colonial powers, etc.

In fact, Hans Rosling has many other videos featuring statistics, all available online. He has done for statistics what A.J.P. Taylor did for history in the 1960s and 1970s, when his television lectures of popularised history captivated millions and earned him the nickname of “television don”. Sadly, Hans Rosling passed away in 2017.

Having had a taste of what the GDP is, let us see what it is not. It does not count the transactions that do not result from the three factors of production: labour, land and capital. Therefore, it is not a gauge of the country’s wealth. Also, it is a macro variable, calculated across the whole economy. In this sense, GDP tells us little about one of the pillars of democratic societies: the equitable distribution of income across population groups. 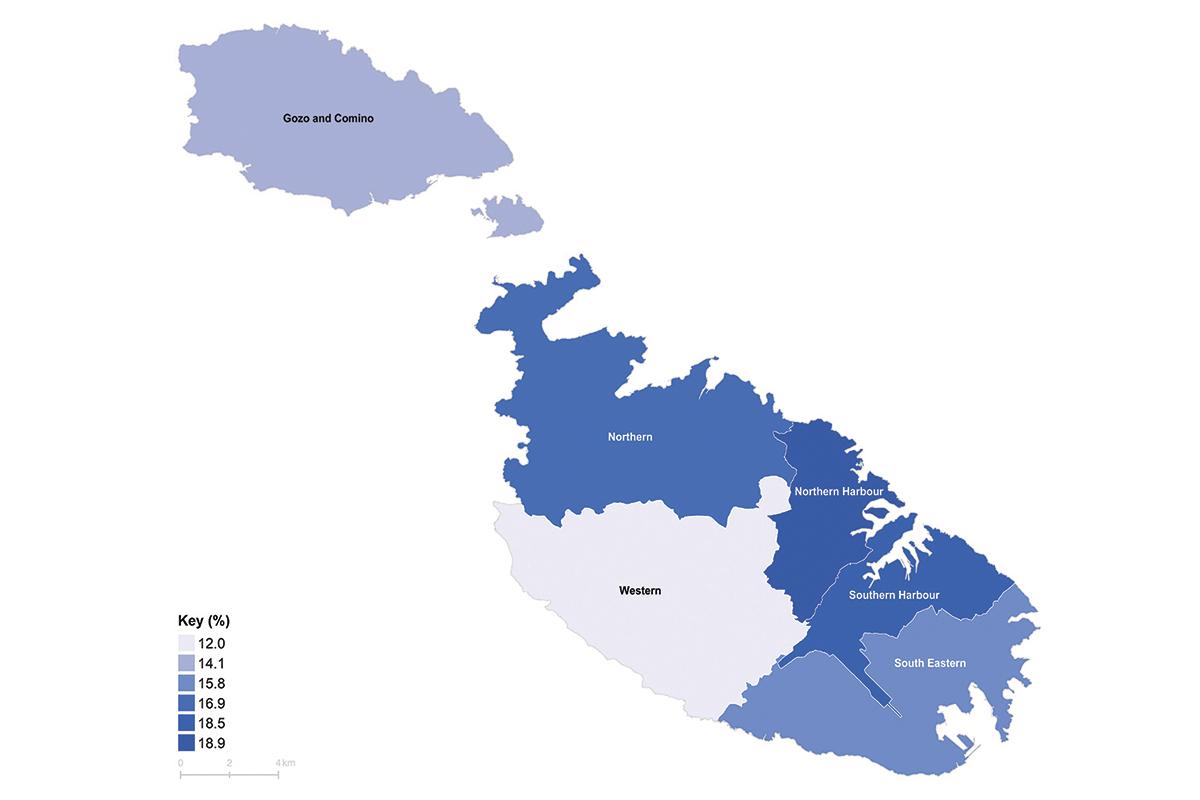 EU-SILC entres at this point. Its variables are much more useful in empirically measuring people’s standard of living than the GDP. Among a wealth of information, EU-SILC produces two important equality/inequality indicators. The Gini coefficient measures the extent to which distribution of income among households or population groups deviates from a hypothetical line of perfect equality. Value 0 denotes perfect equality and 100 perfect inequality. Having said that, most countries start counting from a value of 25.

In 2018, the Gini coefficient for Malta was calculated at 28.7, which ranks us among the countries with a low deviation. The second derived indicator is the S80/S20 ratio: the ratio between the equivalised disposable income of the top 20 per cent of the population in private households and the corresponding figure for the lowest 20 per cent.

In 2018, the S80/S20 ratio for Malta was calculated at 4.3, which means that the share of household disposable income of the top 20 per cent was 4.3 times the share of the lowest 20 per cent. EU-SILC produces statistics that are even ‘closer to home’, for example that children under 18 years and the elderly living in private households are the most likely population groups to be at-risk-of-poverty or social exclusion.

There may be the perception that the discipline of statistics is a dry one, but it really is not. Numbers, coupled with explanatory text and visuals such as a chart or map, are a thing of beauty and tell riveting stories.

Sometimes, the stories are not beautiful in themselves because the job of statistics is to depict a picture close to reality, and there are times when reality is ugly.

But the beauty lies in the potency which numbers as a tool place in the hands of the person or organisation taking decisions.

A jumble of numbers, properly treated statistically, becomes a coherent collection of information that serves the highest public purpose as well as the humblest personal one: from the policymaker focused on making the right decisions on a multi-million-euro infrastructural project, to the conscientious weight watcher intent on deciphering the nutritional proportions of a food product on the supermarket shelves.

Thanks are due to the Malta Statistics Authority, Etienne Caruana, Elaine Grace Borg, Sarah Cachia and Silvana Scerri. We worked together to bring the ESF training project to fruition. My appreciation goes also to the lecturers and organisers, especially Ian Cassar and Ian Abela who delivered the macroeconomics course in an inspirational way.

Catherine Vella works at the National Statistics Office and has occupied various horizontal and institutional roles throughout the years.