On December 24, 1675, Christmas Eve, the physician Dr Giacomo Cassia was called by a prosperous Valletta merchant of textiles, Matteo Bonnici, to attend to his sick 11-year-old daughter who had suddenly fallen ill with a high fever. 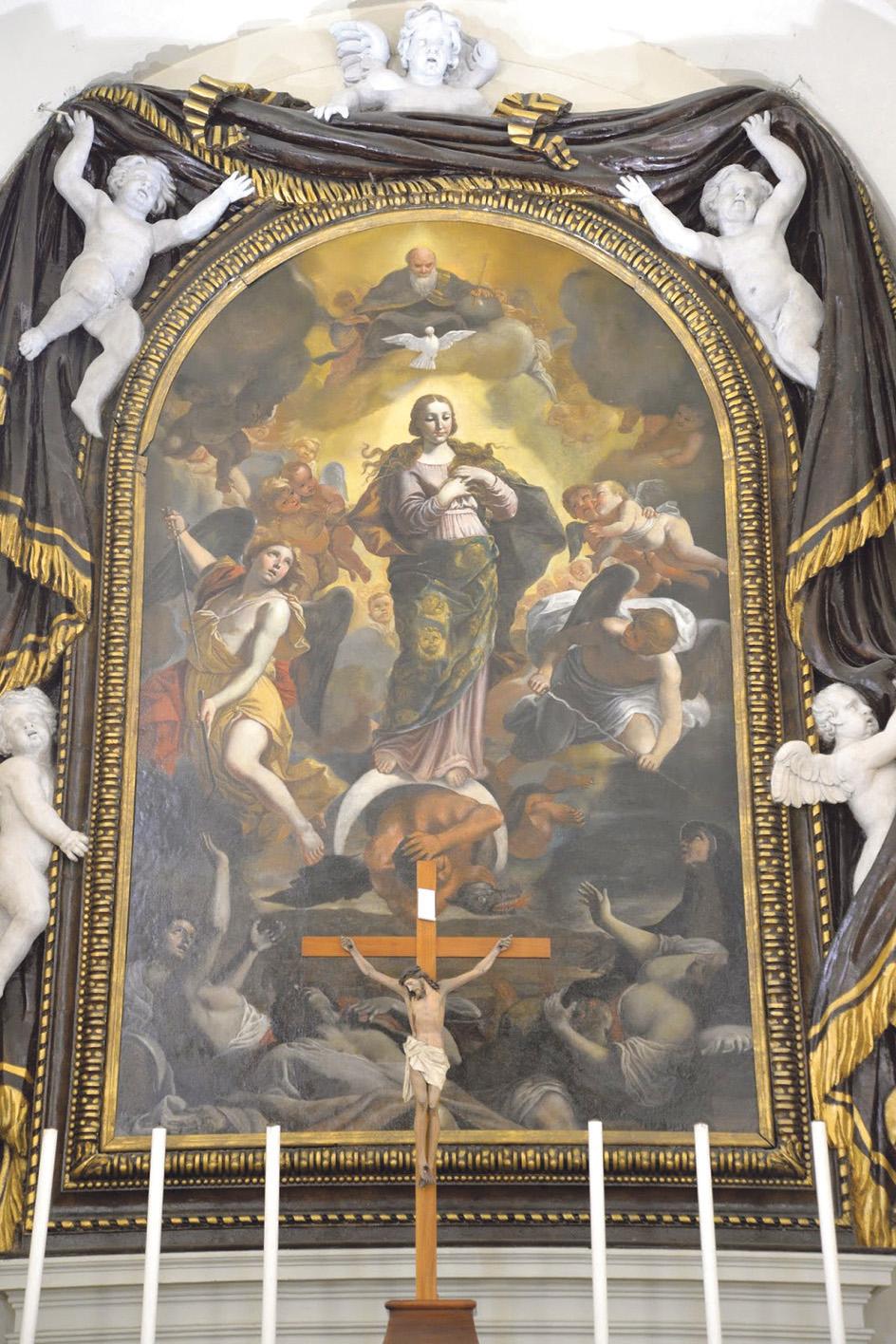 The main altarpiece depicting The Immaculate Conception, by Mattia Preti, at Sarria Church.

Dr Gio. Domenico Xeberras, the Government Chief Physician, or Protomedico, was informed of the case and he also examined the patient. He found her to be suffering from “an acute and malignant fever with a few red spots and a small pustule in the side of the groin”. The girl passed away on December 28. However, although Dr Cassia had been alarmed by the symptoms, no one diagnosed the plague.

However, within a month, almost the whole Bonnici household was wiped out. Two-year-old Gioacchino’s death on January 10, 1676, was diagnosed as due to teething even though doctors found three petachiae on the child’s right arm.

A household slave also fell sick, and a bubo appeared on her right groin but she survived. Seven-year-old Teresa died on January 17 after having the same symptoms. It was only now that the doctors became really alarmed and ordered the house to be barricaded. 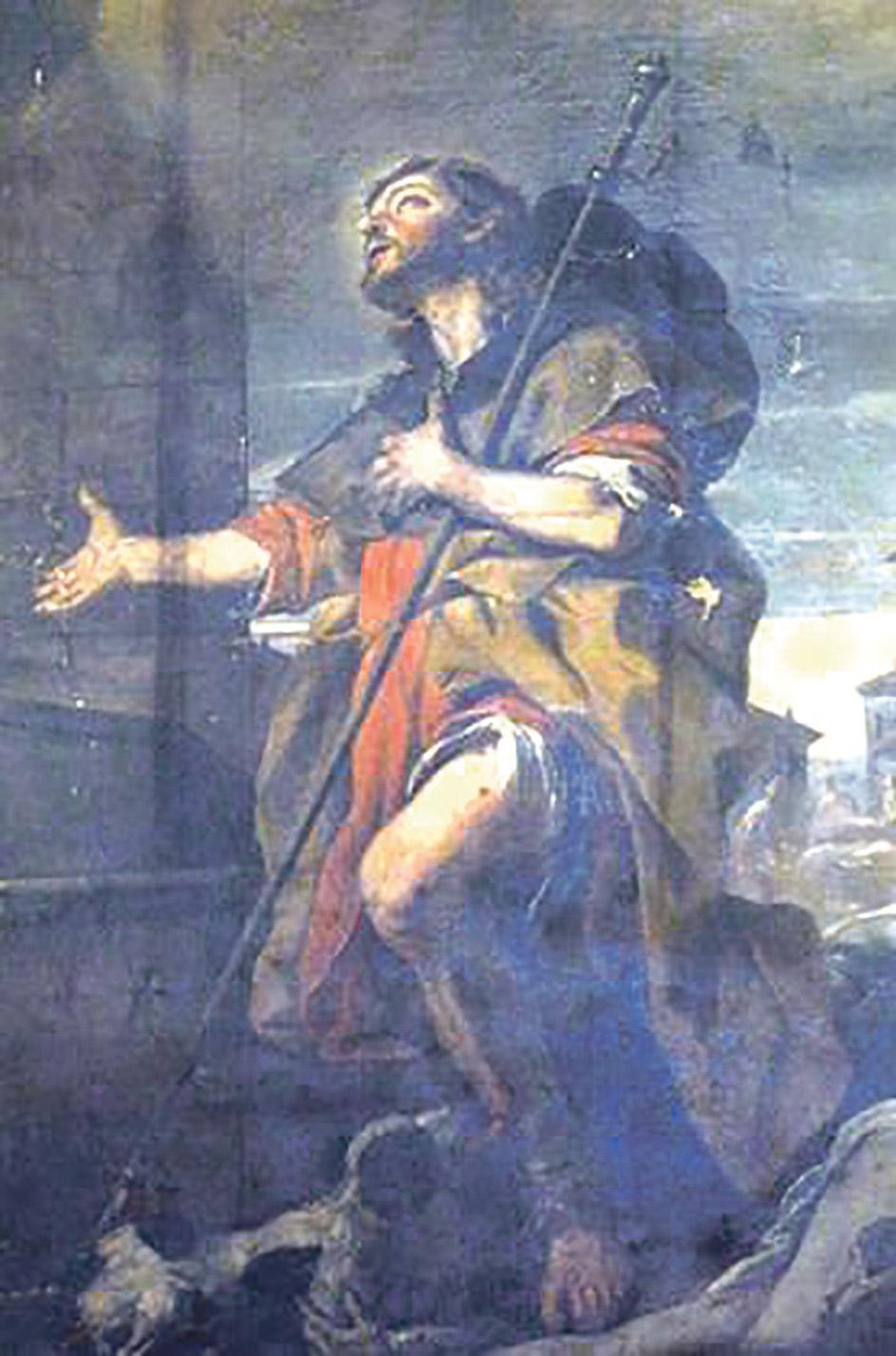 Another residence was also barricaded. It was situated in the same block of buildings and was the residence of the Agius family, close relatives of the Bonnici family. In fact, seven-year-old Antonia Agius and a 60-year-old slave of the Bonnici household soon died.

Matteo Bonnici paid a certain Carolo Bugden, a surgeon, to reside in his barricaded house and take care of the family. However, it was of no avail, and Matteo, his young son Giovanni and a youth living in the Agius apartment soon passed away.

It was only then that the protomedico advised that they should “move the members of the two families with all their belongings to the warehouses of Marsamxett” to prevent the spreading of the epidemic. 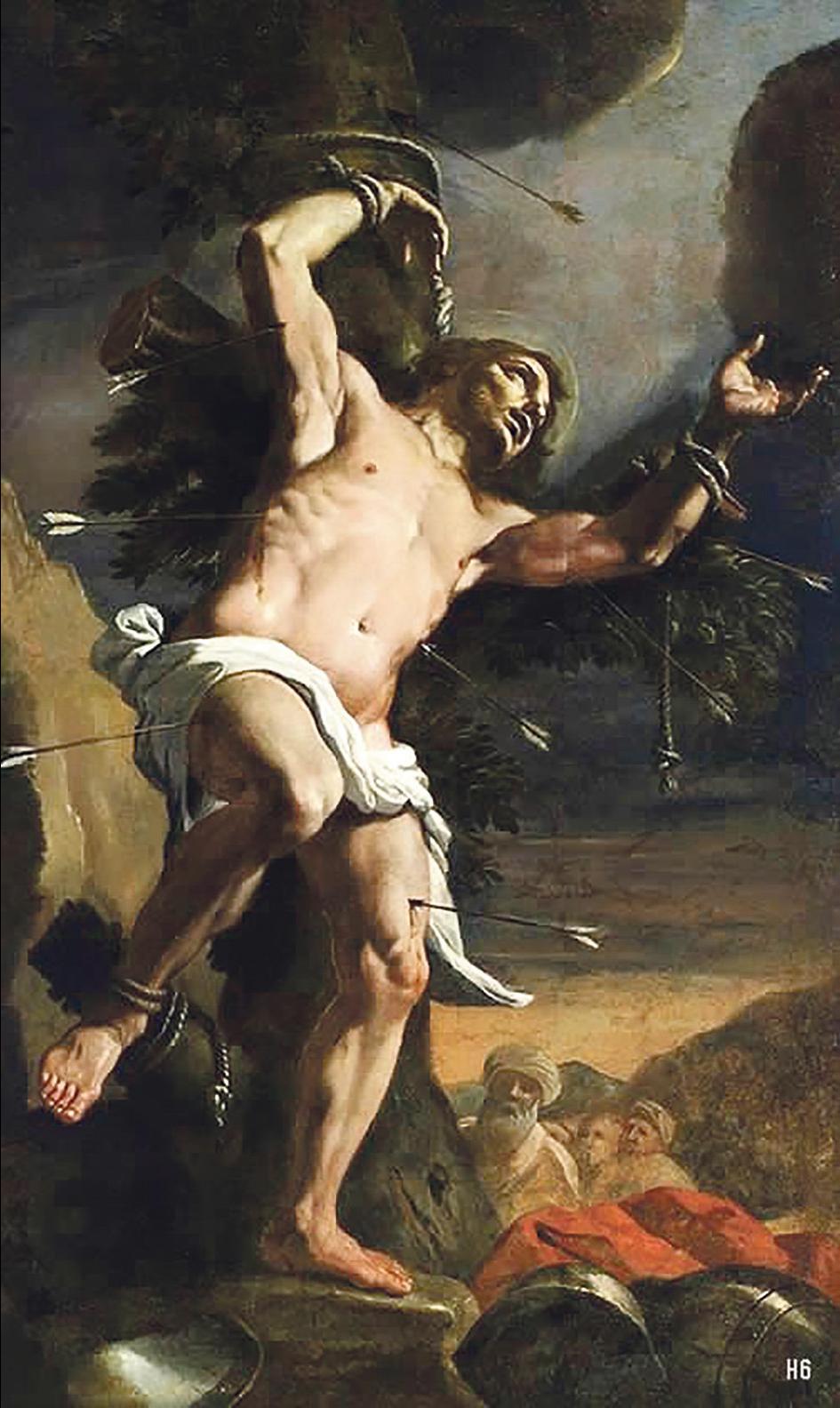 Only a few members of the two households survived, including Maria Bonnici, Matteo’s wife, and their son Fabrizio. Both had contracted the disease but they eventually recovered.

It was in this way that the worst plague outbreak ever to hit Malta started. By the time it died out in August 1676, well over 11,000 people had passed away.

Bartholomeo dal Pozzo, the well-known historian of the Order of St John, began his description of this plague outbreak by asserting that “Divine vengeance ordained the punishment of plague for our sins”.

Continuing on the same vein, he wrote that “because plague was regarded as God’s punishment, the minds of men were clouded and no one would admit it was the plague”. And, indeed, this may very well have been one of the reasons why this plague outbreak took so long to be diagnosed. 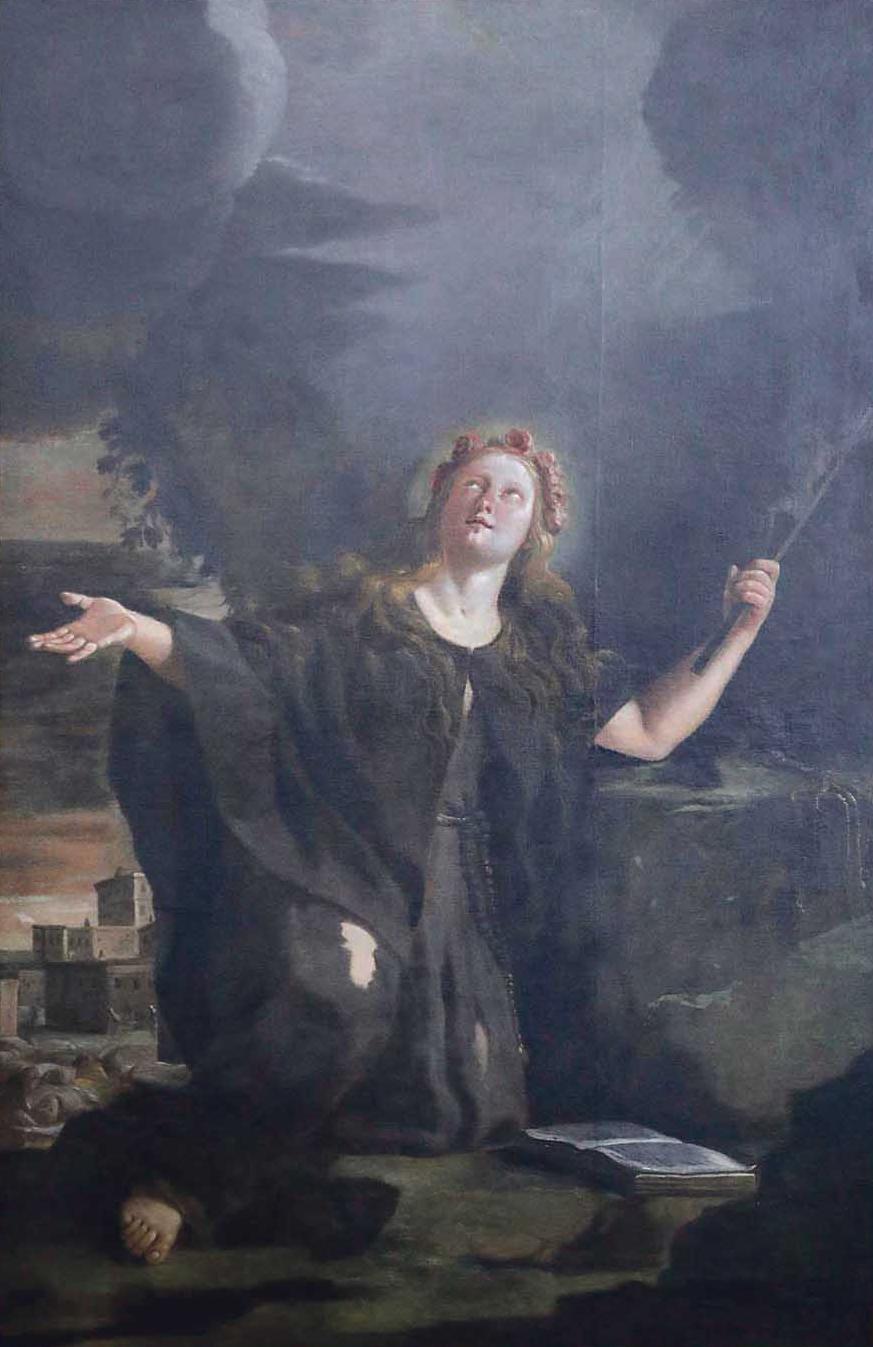 St Rosalie, a painting by Mattia Preti at Sarria Church.

Actually, one of the members of the Medical Board, Dr Giuseppe del Cosso, persisted in repeating that the “malignant fever” was not plague but “an epidemical type of malignant pricking disease, allegedly common all over Europe”. The medical report of February 4, 1676, hinted at plague when it described the malady as “a very serious disease with some suspicion of pestilential malignity”.

Unfortunately, because of these medical disagreements, decisions were being taken slowly and the epidemic continued to spread. Del Cosso even disagreed with the decision to move the suspects to the Lazzaretto. Furthermore, most of the people at large sided with del Cosso because they could not face the truth and were scared just by the sound of the word ‘plague’. 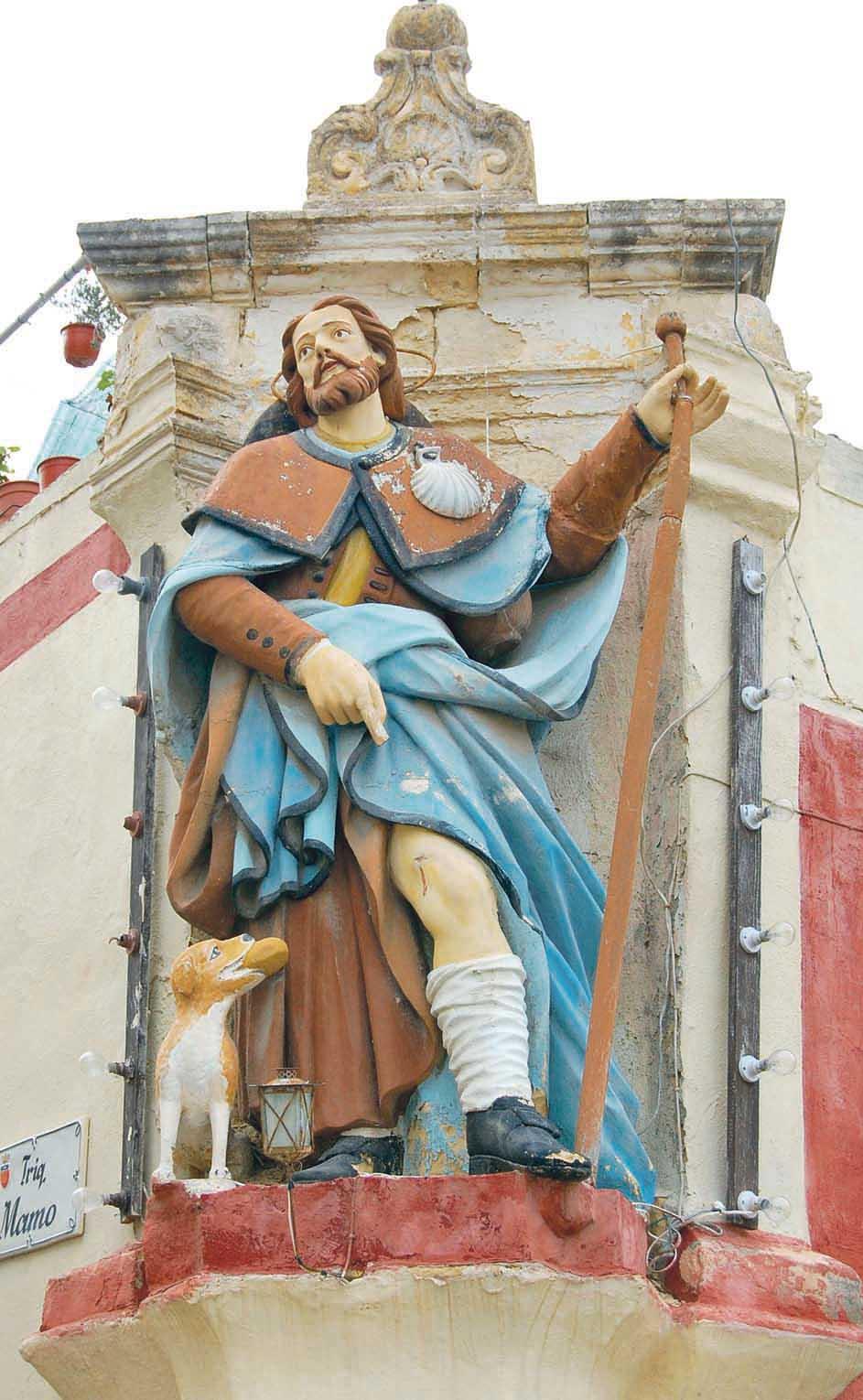 By March 2, only about 100 people had died and, in late April, it seems that not everyone was as yet convinced that there was a very serious outbreak of the bubonic plague. One of the first to diagnose the disease was Dr Gio. Francesco Bonamico, who had his diagnosis confirmed by the medical academies of Paris, Rome, Florence and Valencia.

Many vows to Divine Providence were made. Bishop Mgr Lorenzo Astiria and the Cathedral Chapter vowed a national pilgrimage to Our Lady of Mellieħa, while the Order of St John promised the building of a new chapel at Floriana, the present Sarria Church, together with an annual votive procession on December 8 from St John’s Conventual Church to the new chapel.

Various saints were invoked, mostly the same ones invoked in similar circumstances all over Europe, including St Roque, Our Lady, St Sebastian, St Rosalie, St Nicholas and St Anne. Undoubtedly, however, St Roque was the saint whose intercession was sought most.

The bubonic plague was a very painful disease. Dr Gio. Francesco Bonamico described it in these words: “The disease starts with a temperature, often mild, in some cases high. The temperature goes down gradually so that by the third or fourth day it is hardly detected… 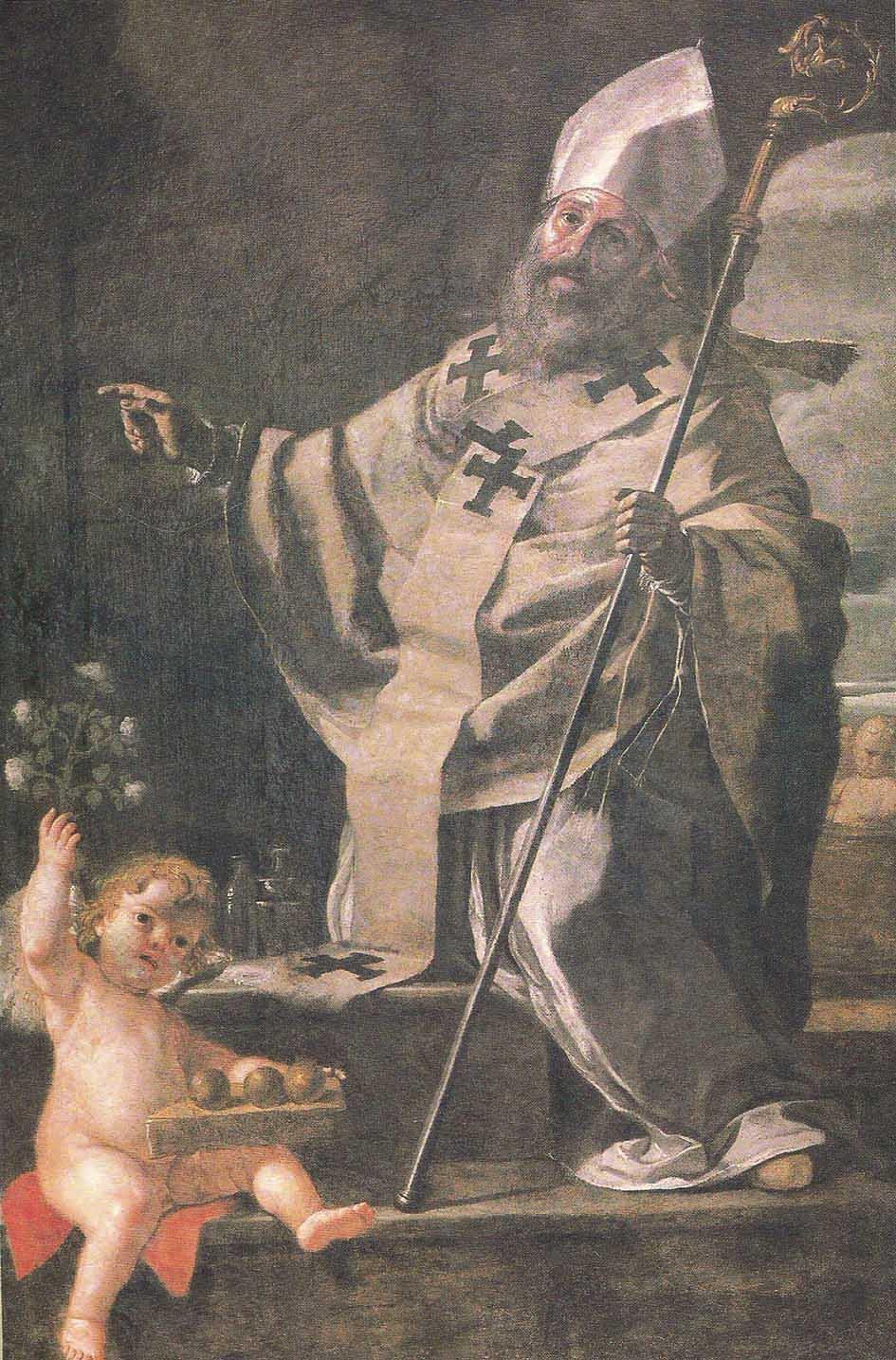 St Nicholas, a depiction by Mattia Preti at Sarria Church.

“Most patients are tormented by severe headaches…, by an acute pain in the knees, they have red and burning eyes, some fall in a delirium, some become temporarily blind, some drop in a coma and have convulsions. Many start vomiting from the onslaught of the disease, suffer badly from nausea, loss of appetite and thirst…

“On the first, second or third day of the disease, small or large buboes appear mostly round the groin, sometimes in armpits, in rare cases behind the ears… Carbuncles appear on some, pustules on others. Sometimes carbuncles and pustules appear together on the same person.

“Most of the sick die within the first four days of the disease. However, some hold on for seven days.”

The same medical doctor recounts how the disease spread in Malta: “Towards the end of January, two other families [in Valletta] living far from [Bonnici’s home] were found to be infected with the same disease. It is certain that both families had bought textile material from women-retailers who had business deals with Matteo. Soon afterwards, through one of these retailers, other homes… were infected. Likewise, through another woman-retailer, the infection spread… also to the nearby castle [St Angelo] and the adjacent town…

A corner votive statue of St Roque in Valletta.

“At the same time the plague struck a village [Attard]… appearing at first, to be sure in a countrywoman’s family who is known for certain to have frequented Matteo’s house when the disease was already raging. Soon the disease attacked the family of the undertaker who, not knowing anything about the infection, had buried the countrywoman’s son.

“Through the whole of February both in Valletta, in the neighbouring towns and in the village [Attard] as well as the hospital set aside for infected cases, 42 died of the same disease.

“With the approach of March, the epidemic seized not only the whole of this village but gradually attacked very many others. This could perhaps have happened because the goods from Tripoli, bought by Matteo, might have been sold there by Matteo himself who used to go around doing business with the village people.”

It was quite natural for Bonamico to blame Matteo’s business contacts for spreading the disease because, in those days, it was not yet known that the plague was passed on from rat to man by means of fleas. Yet contact with stricken people did increase the risk of being bitten by a plague-flea.

From Valletta, the plague spread outwards. It appeared in Senglea on February 14, at St Angelo on February 21 and at Cospicua on March 8. By the end of March, the disease had spread to Vittoriosa, Victoria, Kirkop, Qrendi, Qormi, Balzan, Siġġiewi, Żebbuġ and Żurrieq.

In April, the plague struck Lija, Tarxien, Luqa, Għargħur, Naxxar and Mqabba. Gudja, Żejtun and Mosta succumbed in May. 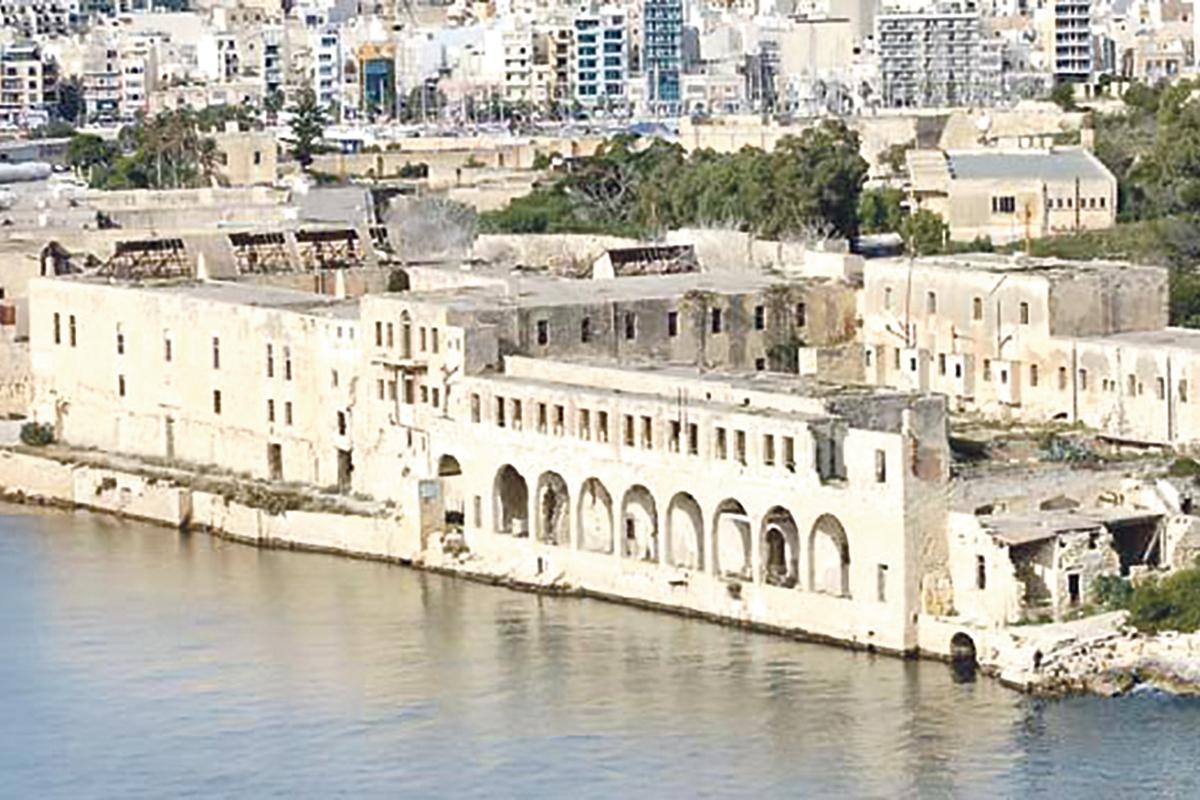 Lazzaretto Hospital at Manoel Island, now in a dilapidated state.

Only Safi, Mdina and Gozo were spared.

No one has, so far, really explained with certainty how the sickness found its way into Malta. The arrival of a British naval squadron from a punitive expedition to Tripoli – at one time there were 17 warships in harbour – has generally been pinpointed to have been the cause.

However, during that particular December, there were also ships from Tunis, Alexandria and Acre in the harbour. Any one of them could have been the carrier of the disease, and Dr Bonamico did point out that Matteo Bonnici had bought goods from Tripoli.

The last plague victim to die was in the distant hamlet of Ħax-Xluq, limits of Siġġiewi, on August 30. On September 24, the island was declared free from the plague and pratique was announced. But, by that time, an estimated 11,300 souls had met their deaths through this pestilence.

The lengthy extracts from the writings of Dr Bonamico have been quoted from Joseph Micallef’s The Plague of 1676 – 11,300 Deaths, Malta 1985, which was translated and published in Maltese in 2015 by the author of this article, whose own publications include Histories of the Order and the French in Malta and The Fleet of the Knights of Malta: Its Organisation during the Eighteenth Century.