There is an old paperback gathering dust on my library shelves. Storja tal-Mosta bil-Knisja Tagħha, is a 232-page account of the history of the people of Mosta and a description of its monuments and sites.

The book was published in 1930. It was written by Emanuel Benjamin Vella (1898-1946), better known as E. B. Vella, an erudite scholar and historian hailing from the same locality. He was headmaster and inspector of primary schools. The book was one of a series on several localities in Malta.

A good 80 pages of the book deal with Mosta parish church. Vella gives a detailed account of the planning and construction of the ‘Rotunda’, as he calls it. He relies heavily on primary sources that include notarial and church archives, articles from periodicals that include those in the Malta Government Gazette, and even foreign travelogues about Malta that mention the church. He also cites clauses of the contract between the parish and the architect, Giorgio Grognet de Vassé. All these sources are useful to understand the purpose, planning and progress in building the fabbrika, as Vella calls the structure under construction. Vella also points out the challenges and adversities encountered when seeking to raise the required funds.

This is an abridged account of the text. I have included a few comments [in boxed brackets], which I feel are relevant to clarify Vella’s account.

By 1815, the original parish church building had become too small for the village community. Whenever an important religious function took place, most of the congregation had to remain outside while those inside jostled for space. The population of Mosta at the time was 3,820. Apart from lack of adequate space the structure of the church was not stable and needed to be replaced by a new edifice.

Among the proposed designs, the one submitted by the Maltese architect Giorgio Grognet de Vassé was chosen. His Neo-classic concept was based on the famous Pantheon in Rome. Vella avers that it is likely that the parish priest, Dun Feliċ Calleja, had chosen Grognet’s design as he had a special bond with the Pantheon, having celebrated his first Mass inside this once pagan temple, while studying theology in Rome.

On August 5, 1832, a committee was set up to undertake the new church project. Other sub-committees were set up, one of which was to raise funds and another to monitor construction work. The main committee was presided by the parish priest himself, Dun Feliċ, while Dun Ġammari Schembri acted as his deputy. Dr Franġisk Chetcuti, a notary from Mosta, was secretary.

Approval for the construction of the church was required from the authorities, ecclesiastical as well as civil. The Bishop of Malta, Mgr Francesco Saverio Caruana, was against the neo-classic concept. [He was the same prelate from Żebbuġ who, some 32 years earlier, had led the Maltese insurgents’ two-year blockade against the French. He had been ordained bishop in 1827 and died on November, 17, 1847]. Mgr Caruana believed that Grognet’s design was undignified for a Roman Catholic edifice. He was in favour of the conventional Latin cross. Nevertheless, he granted permission, albeit with a stern warning to the Mosta spiritual leaders to endeavour with all their might to spread the teachings of the Church among the faithful. [As if such a strongly worded heeding was ever necessary!]

Approval for the construction of the project was also sought from the Governor of Malta, Sir Frederick Cavendish Ponsonby. His approval was vital, as the chosen site encroached onto two public pathways, two houses and other landed property that needed to be expropriated. Ponsonby acceded to the request without hesitation.

The new church was complete by the beginning of 1860. On February 16, the still functioning old church inside was dismantled, the work being completed in a few days

The contract with Grognet was signed on July 19, 1833, at Notary Franġisk Caruana’s office. [Oddly enough], the signing of the contract had already been superseded by the laying of the foundation stone on May 30. [Even more surprisingly], Mgr Saverio Caruana, opted to appoint his vicar general, Dun Salv Lanzon, to deputise for him, stating that he had other important matters to attend to on the day! The Governor of Malta and the Lieutenant Governor also attended. A triumphal arch was erected for the occasion to welcome the dignitaries.

The clauses in the contract stipulated that Grognet was to make himself available and be present in Mosta throughout the whole period of construction, except for one week’s absence per month. [Evidently, one never expected that the construction would take 27 years to complete]. Grognet was to be paid 1,200 skudi for the design and for overseeing construction work. Payment had to be effected in instalments over a period of three years. This amount, he had argued, was more than fair when compared to fees of some 6,000 skudi generally charged by competent architects for work of this kind.

To compensate for his move to Mosta and for the personal items that he had to purchase to replace those left behind at his Valletta residence, Grognet requested a one-off remuneration of 300 skudi. Moreover, he also asked for 10 irbgħajja (equivalent to 10 pence and eight ħabbiet/grani) daily, for his upkeep for the first three years of his sojourn in Mosta. [One skud was equivalent to one shilling, eight pence. The maximum wage for a skilled worker at the time was one shilling – 12 pence daily].

Grognet stipulated that he and his wife (or any other second wife, were he to remarry), were to be interred in the new church. The tomb was to be paid out of his own pocket. Grognet died on September 5, 1862. [A marble bust stands above his tombstone close to the left front doorway]. 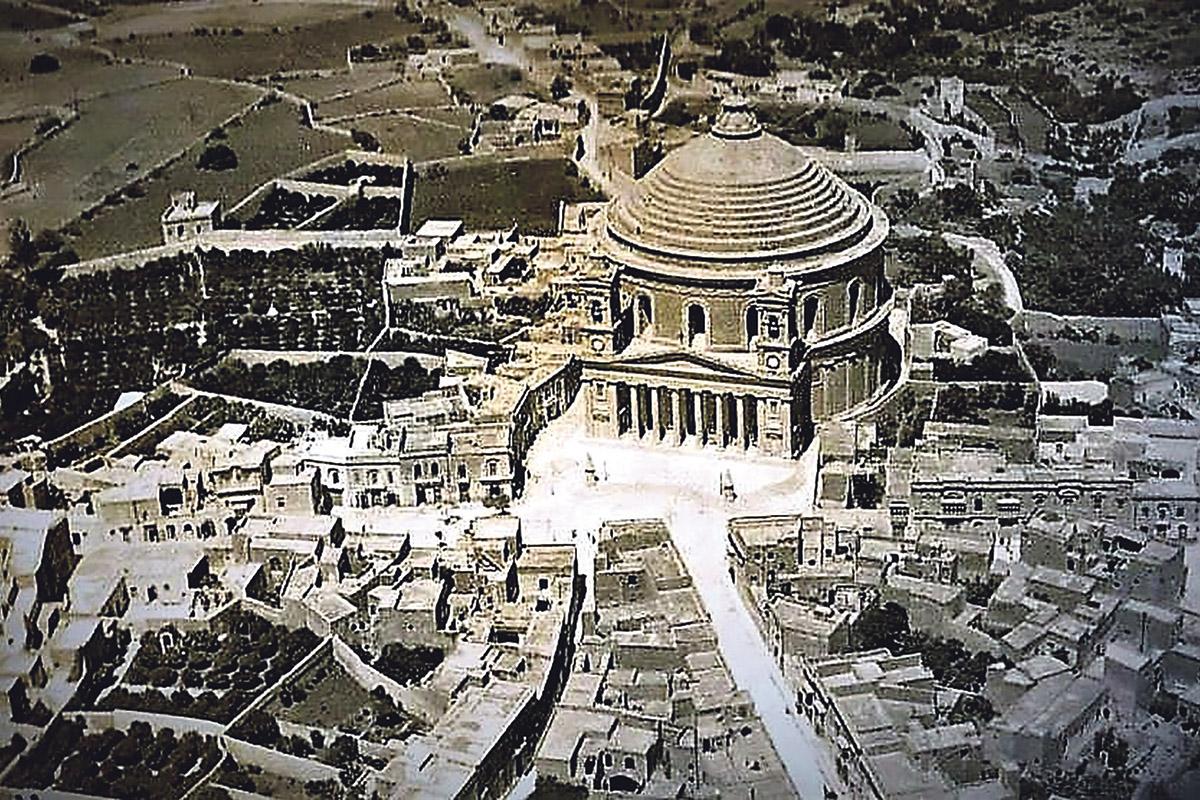 Aerial views of the Mosta Rotunda shortly after it was built in 1860, and (bottom) today. 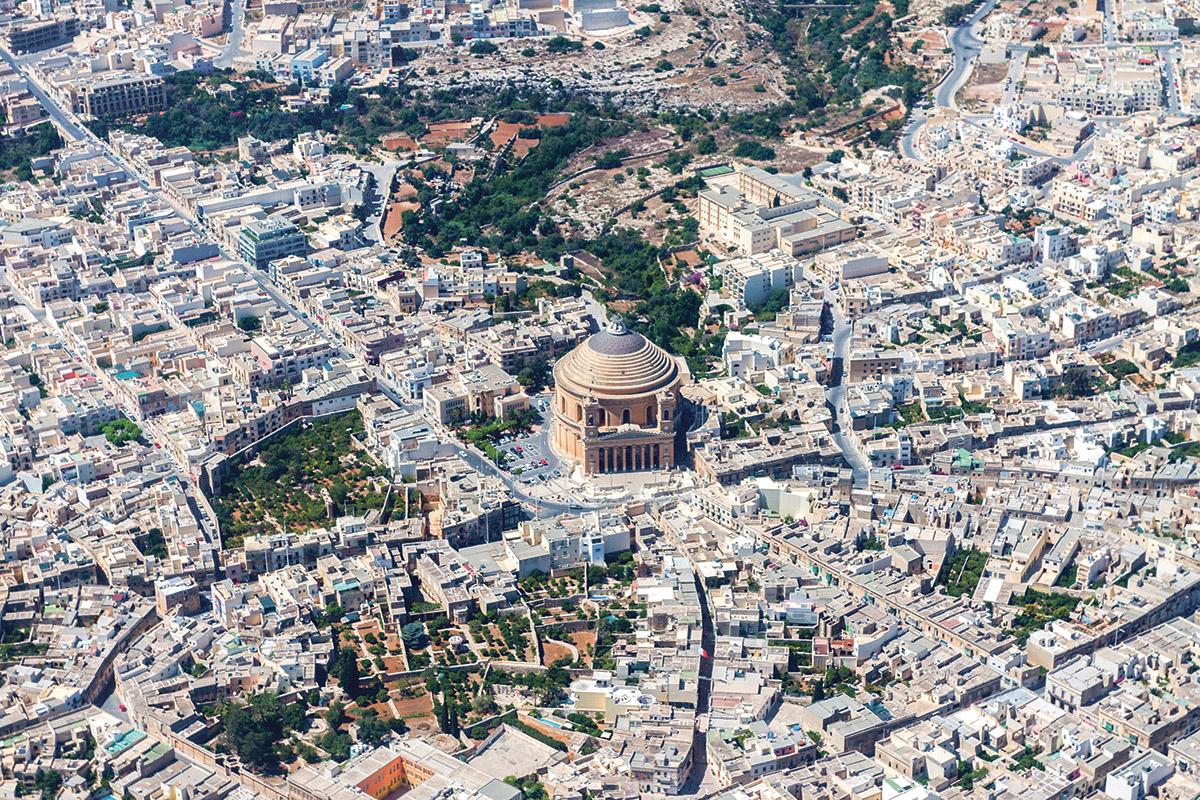 Vella cites numerous reasons why the church was built in the round. These went beyond aesthetic values and related more to practical matters that made construction feasible. The choice was determined thus:

a) The building of a gigantic and pillar-less domed church would allow the existing old church to function during the period while the new structure was being erected.

b) Burial vaults underneath the old church would not be disturbed. [Shifting corpses from burial vaults were sensitive issues].

c) A pillar-less church would allow a congregation of some 5,000 to follow religious ceremonies on the high altar without any visual obstruction.

d) A pillar-less church would also be less costly to construct than a Latin cross church.

e) The church would be aesthetically different than any other existing church in Malta.

Vella surmises that Grognet must have wanted the dome to symbolise the heavenly tomb of the Virgin Mary. 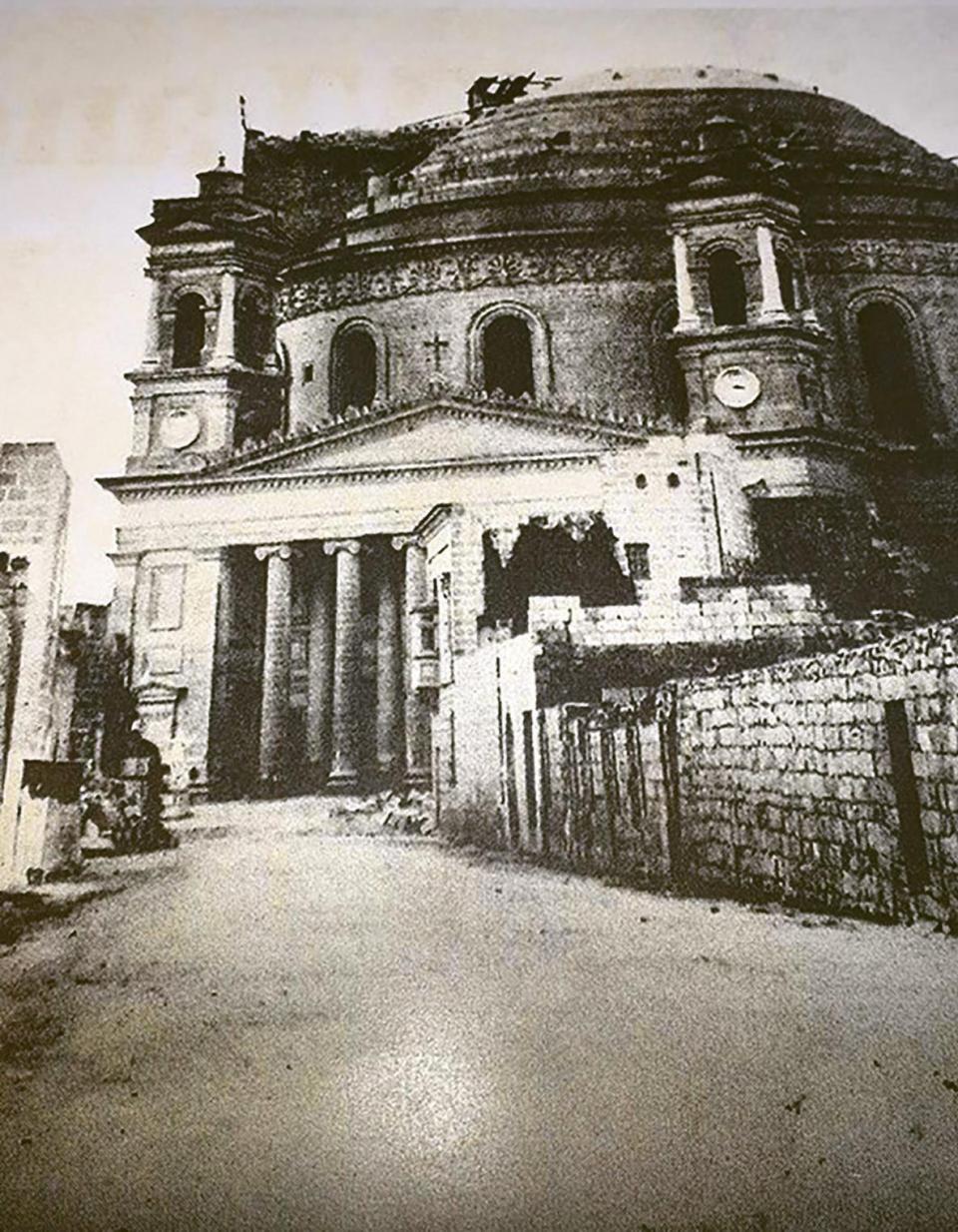 The Mosta dome in the mid-19th century, not quite ready.

The originator of the project, Dun Feliċ Calleja, died on February 20, 1833, aged 82, well before the foundation stone was laid on May 30, 1853. His deputy, Dun Ġammari Schembri immediately took over. In his will, Calleja left 8,423 skudi, two irbiegħi and eight ħabbiet towards the initial expenses. These were to be kept in a safe box, inside the old church. This box had three locks, each of a different make, each with a key to match, each key being retained by one of three selected committee members. Dun Calleja also left legates from his personal property towards the new project. It is estimated that in all, he contributed between 20,000 and 26,000 skudi. This amount would kick start the project, but was well below the sum required.

Various initiatives were taken in order to raise funds. A grand lottery for which the committee sought permission from the authorities on July 3, 1835, was held. Three prizes were offered, ranging from 2,630 to 2803 skudi, that included immovables. Each lottery ticket cost one shilling. [The high-end prizes seem to have been aimed at enticing the Maltese middle class and businessmen, rather than the farming community of Mosta]. In the event, the organisers, who planned to sell 4,567 tickets, only sold half. Vella assumes that the lottery draw was never held because of this shortfall and so the monies from the tickets were retained, but the coveted prizes never won!

The organising committee also sought permission from Mgr Caruana to make use of legates and benefices from the same parish. The request was, however, not submitted to the local Curia but to the Holy See to intervene with the Maltese bishop on their behalf. [This says a lot about the uneasy relationship that existed between the Mosta parish and Mgr Caruana]. These funds were to be drawn from legates of seminarists, marriages, Masses and feasts. This act of ultramontanism bore its fruit, as the Maltese Curia eventually authorised such sources for funding for the next 15 years. These funds were estimated to yield some 3,000 skudi annually. 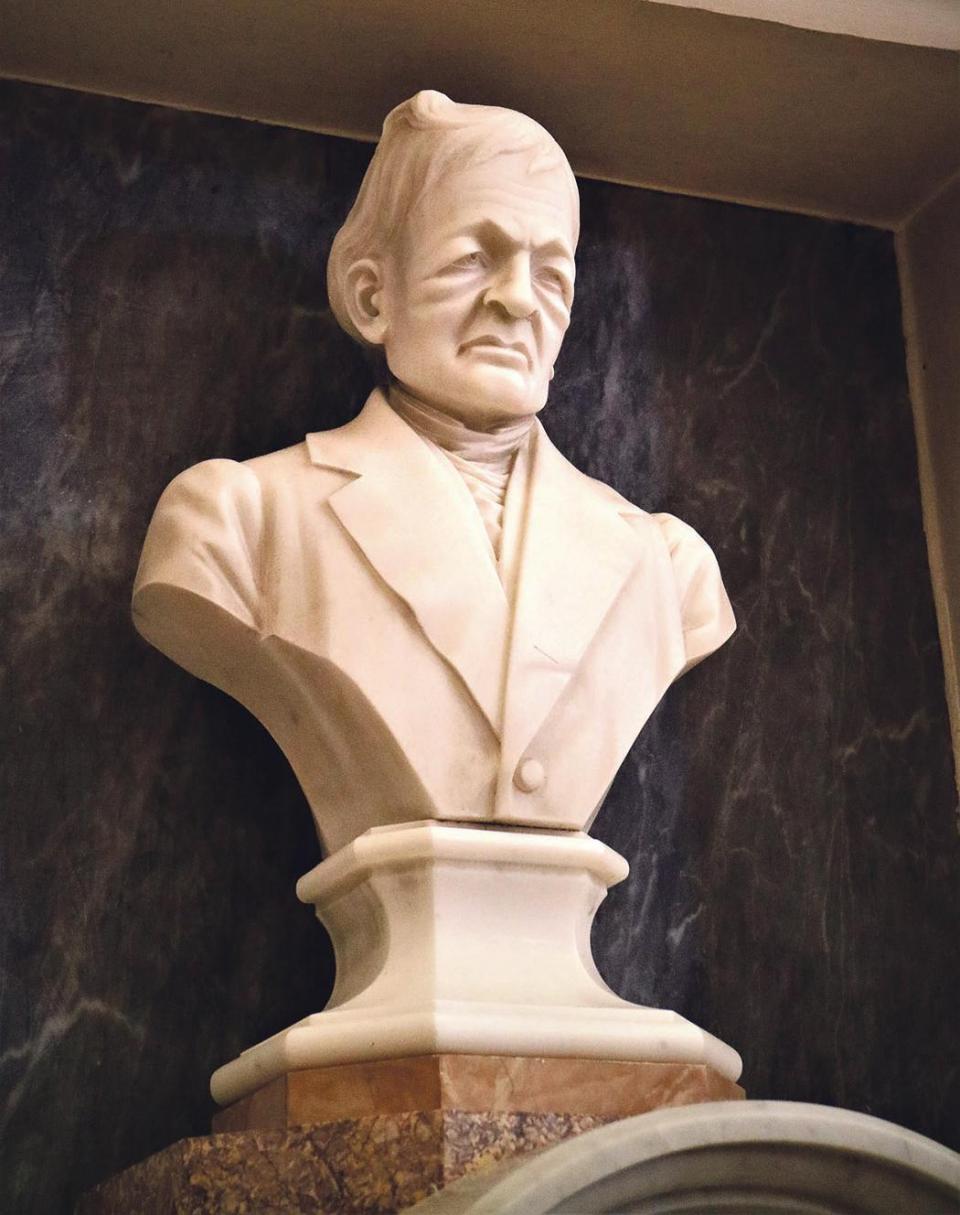 The marble bust of the architect, Giorgio Grognet de Vassé, above his tombstone close to the left front doorway at the Mosta Rotunda.

In the initial stages, between 39 and 58 workers were employed daily, first under the supervision of Mastru Ġiusepp Mangion of Birkirkara and some time later, under master mason Anġelo Gatt of Żejtun. The former was paid six irbgħajja and karlin (10 pence and 10 ħabbiet) daily. In 1842, Mastru Anġ’s pay was raised to one skud (18 pence) daily. The average worker was paid less, the lowest wage being 24 ħabbiet (two pence) daily. Some workers were paid simply according to each load of stone blocks (barkata) hoisted to the upper tiers of the edifice. These workers were each paid three karnijiet (tuppence h’penny). Many parishioners volunteered their assistance on Sundays and public holidays. [It is assumed that special dispensation was obtained, given that this was an ecclesiastical project, for people to work on the day of the Lord]. Work on the church progressed and stalled also according to the funds available.

Most of the building stone was excavated from quarries situated on the outskirts of the village, one known as Ta’ Dullambrott, near Tal-Kunċizzjoni chapel, and the other in the area known as Ta’ Cumbo. The stone blocks [Maltese: ċnagen] were hoisted to the upper levels by a simple pulley (taljola) placed near the western bell tower and a block and tackle (parank and pastigi) on the ground through which ropes passed, to be towed by four mules. Once the blocks reached the required tiers, they were carted to the location where they were to be fitted. When it came to the construction of the drum above the barrel structure, the stones were fitted onto the existing layer below it. Each stone was dove-tailed to the next, to prevent slippage.

The new Mosta parish church was complete by the beginning of 1860. On February 16, the still functioning old church inside was dismantled, the work being completed in a few days. The new church started functioning immediately after. Yet it was only on October 18, 1871, that Bishop Gaetano Pace Forno consecrated the new church.

The total expenditure had reached £21,000 (about 259,400 skudi), a far higher sum than the original estimate. Vella states that when the Mostin committed to build such a temple, they never anticipated the exorbitant costs involved. At the time, Mosta only had six well-to-do families, the rest were mostly farmers. Vella avers that Grognet managed to persuade the community that his design was feasible. The author compares the work on the Mosta church with St Paul’s Anglican Cathedral in Valletta, also built in the first half of the 19th century. The latter cost slightly less – £18,000, but was completed in just five years.

The Rotunda, today ennobled with the title of Basilica, stands as proud testimony to the tenacity and ardour of the people of the town.

Measurements and some comparisons with the Pantheon

Acknowledgement
I would like to thank Michael Cassar in providing useful advice on the editing of the text as well as for the visual material he made available.