Four years ago, Ciro Ascione left his home in Naples and moved to Malta to set up a business – the exporting of unwanted clothing.

It’s something that is in his blood. His grandmother set up a similar business in Italy after World War II, which decades later led her grandson to become the director of Refab Light Blue Partnership in Malta.

“We collect around 14 jumbo bags of clothing a day, which translates to around 14,000 black household sacks. We have two to three trucks on the road, which empty our 148 blue bins and bring the items to our warehouse in Żebbuġ,” he said.

“We adjust how much collecting we do, based on the season. Between winter and summer the bins fill quicker as people get rid of their unwanted clothes to make space for the next season.” 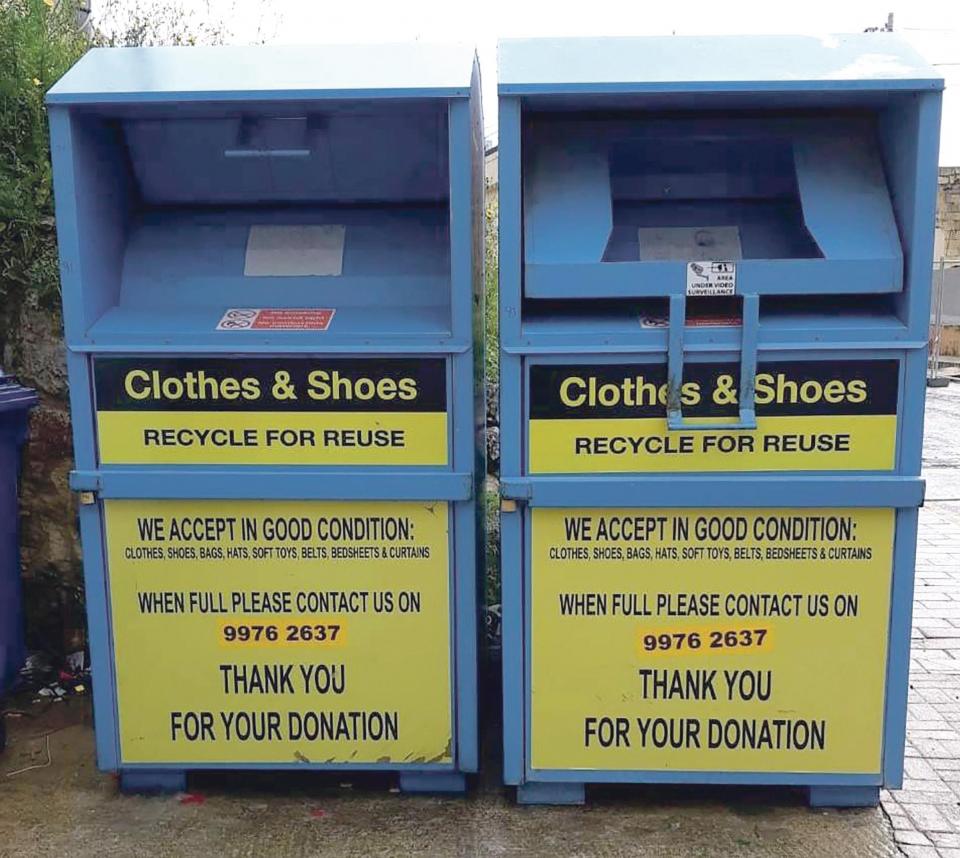 Of course, some use the bins as a place to dump more than their used garments. Mr Ascione estimates around five per cent of what is donated is not clothes.

“We’ve found this and this,” he says pointing to a bottle of glue and an ashtray on his desk, which he has recycled.

“We’ve even found unused paper which we use in the office printer.”

But the company also gets more useful items which they can pass on.

“We get a lot of toys. If they are in good condition, we give them to an NGO here that works with a children’s hospital.”

Any clothing that is useable is shipped to companies based in Dubai and Tunisia, which specialise in buying second-hand clothing from suppliers like Mr Ascione.

“They then separate the garments into further categories such as ‘men’, ‘women’ and ‘children’ and ‘summer’ and ‘winter’ and then further sub-categories depending on the quality,” he said.

The final customers are in places like Central Africa, where they can buy these used – but good quality clothes – for cents

“The best items are sold to vintage shops, the next best go to what’s called ‘the secondary market’, while any leftover that is made from cotton and too used to be worn is turned into rags.”

The business initially partnered with Electrowaste Malta – but the pair parted ways in 2018. Refab Light Blue Partnership started off with three employees and four years later it has grown to 10. But success was slow.

“We chose Malta because it was the only country in Europe that didn’t have this kind of service. But culturally it has been hard to grow this kind of company, as there is no support system for ‘green businesses’ here,” Mr Ascione noted.

“While we do fall under the Environment and Resources Authority (ERA), we struggle to even get a meeting with people to talk about what we do. There has also been some confusion from others who think we are a charity, but we are very clear that we are not. Before we set up our business here everything went to landfill, now most of it is exported.

“We have some charity shops who call us to pick up clothes that they cannot sell, so we are confident that our business is creating jobs in Malta, as well as helping the environment.

“Our clients are in richer countries which can afford to deal with the large quantities of used clothing that is sent to them. The final customers are in places like Central Africa, where they can buy these used – but good quality clothes – for cents. Yes, some people ask, ‘why can’t the clothes just go to people who need them here in Malta’?

“What we say is that there are simply not enough poor people on the island to use the clothes which are thrown away. Fortunately, Malta has a low level of poverty and people here can get help from places like the Church or can buy clothes from charity shops. It’s a very different situation in poorer countries.”

But Mr Ascione reckons things are getting easier when it comes to running a green business.

“We have built up a good relationship with local councils now,” he explained.

“At first, they weren’t sure, but now they call us up and tell us if a bin is not working in a specific area and suggest where it might work better.”

However, despite a global concern about climate change, he says change is not translating into support for green businesses quickly enough.

“The people who eventually get the clothes don’t buy them for environmental reasons. They buy them because it is all they can afford,” Mr Ascione says.

He and his team hope to grow their business further by finding new markets.

“It has taken us time to grow Malta’s reputation when it comes to the quality of clothing here. But now people are talking about Malta and it’s starting to find a place in people’s minds within the industry.

“Other countries in Europe have been recycling since the 1980s, so there is already a strong culture of reusing items there. Hopefully, it will change here too,” he said.