As we approach the new year and we promise ourselves a fresh start and the courage to chase our dreams, new book Echoes - Distant Voices: Distant Lives, seems a fitting read for the season. The latest novel by award-winning Maltese novelist Lou Drofenik sees characters crossing continents to build brand new lives in far away places

Drofenik’s books are centred around family, their characters pulled from across the generations and their interactions defined by social conventions and the inner desire that people have to break free from these. Drofenik’s novels often flick back and forth between two time periods – in this latest book Echoes however, she crosses oceans as she writes and the story falls into two distinct halves which illuminate the underlying theme of emigration from starkly different angles. 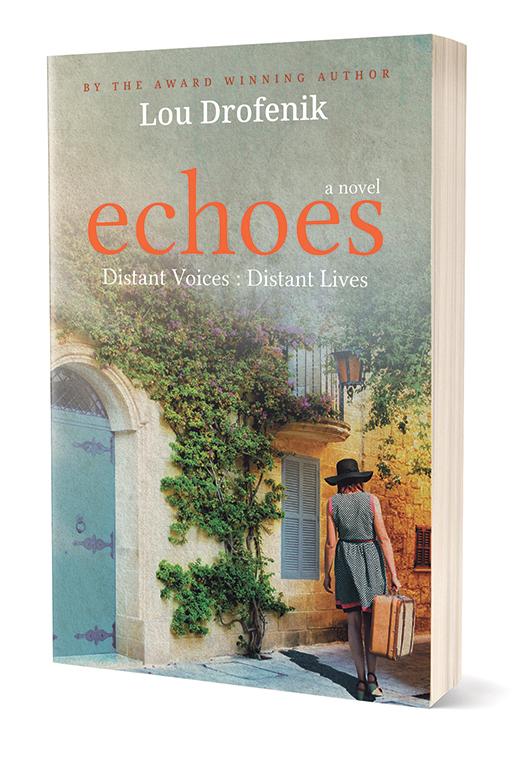 The story follows two families, the Farrugias and the Muscats, and their relationships with one another and the places they live. There’s youth and passion, pragmatism and stoicism, mental illness and tragedy, goodness and generosity: the whole world is squashed into the pages.

The first half is set in Malta, its pleasures and its challenges. From the opening page, the story pulls the reader into the heart of the unequal relationships between English incomers to Malta in the mid-20th century and the attitude of many of them to the existing population. For both those who have experience of these beha­viours and for those who have moved here from another country, it’s an uncomfortable reminder of colonialism, the privileges it afforded incomers and the inherent racism that it represented.

They depart, raw with the emotion of separation

Everyone on these islands has family members who have spent time away from Malta or moved abroad. Some have toyed with the idea themselves or watched newcomers arrive from elsewhere, so the draw and difficulties of far-flung shores will be familiar to all readers.

In 1961, the year in which the book begins, the archipelago was awash with politics as the Nationalists and the Labour party locked horns and the Church declared it a mortal sin to vote for Mintoff’s socialism. There was tension within every section of society, division within families, and hatred and vitriol within neighbourhoods.

Early references to Harper Lee’s To Kill a Mockingbird are thought-provoking, and Drofenik quotes the classic’s prota­gonist, Atticus Finch: “It’s a sin to kill a mockingbird” [or songbird], which has multiple layers in this context – from the rights and wrongs of traditional trapping here in Malta, to the clipping of people’s wings by social structure and – for the women – by patriarchy.

It’s an interesting comparison, that of Maltese villages in the mid-20th century with 1930s Alabama. The implication is that women were often ‘caged birds’, and just as Maya Angelou’s autobiography, I Know Why the Caged Bird Sings is a novel about coming-of-age, determination, bravery and a love of literature, these same traits underpin Drofenik’s main character in Echoes, with 17-year-old Rosie Farrugia.

Drofenik is known for her strong female characters and her stark depiction of a woman’s place in the pecking order. Echoes, however, has fully-fledged characters of both genders. In the first half of the novel, men and women harbour thoughts of flying to places offering new opportunities, and settling elsewhere unconstrained by the past; they wait, they dream and then, finally, they depart, raw with the emotion of separation from many of those they hold dear and the places they know.

In the second half the reader is transported from the honeyed limestone and dusty streets of Malta to a vast Australian terrain where their lives are no longer defined by church bells and old prejudice. Rosie’s family settle in Melbourne while their old neighbours, the Muscat fami­ly, move to northern Australia where Alex Muscat has found work with a logging company.

As life in Australia unfolds for the families, with hard work, surprises, sorrow and love, Drofenik makes clear the importance of the friendship and familiarity of those who understand your path. She is well placed to describe these feelings because she herself migrated to Australia at the age of 21, yet has never forgotten her roots. Not only did she fall in love and raise her family down under, once her children left home, she obtained a PhD at LaTrobe University in Melbourne, researching the effects of migration on Maltese women who went to Australia in the latter half of the 20th century. Of the 85,686 migrants who left Malta for Australia between 1946 and 1990, 24,573 were women.

“I heard so many inspiring stories and interesting anecdotes and my novels reflect these narratives and experiences,” says Drofenik. “The women, although they had very different persona­li­ties and experiences, had many conflicting emotions in common – from the grief of leaving their beloved island, the terrible homesickness, and the challenges of resettling to the joy of their memories of Malta.”

It is the voices of all these women that sing from this wonderfully accessible novel. The everyday narratives of Drofenik’s sympathetic and believable characters weave together towards a neat conclusion in the new world they have made for themselves. The journey was not plain sailing for any of them but they found their way and discovered new loyalties and distant lives without ever losing the draw to their mother island. Raw in places whilst ringing true, Echoes is a read that will stay with you long after you’ve finished reading.