It’s not often football-related news makes my blood boil. But last week I read a story that made me wall-punchingly livid.

This incredulous tale revolves around a 13-year-old Fulham fan called Rhys Porter who suffers from cerebral palsy and epilepsy.

Despite his disability, Rhys loves his football and plays as a goalkeeper. He recently posted videos of himself making saves on social media. But instead of giving the boy the support and encouragement he deserves, sick trolls decided it was appropriate to mock and abuse him.

What in the name of God are these people thinking? Why would you do that to a young lad who is trying to overcome the odds to do something he loves? What sort of sick pleasure do they get out of it?

It really is totally beyond me that people can be that insensitive, thoughtless and cruel; especially to someone so young.

I mean I don’t condone or accept abuse of any type, but I can almost, at a stretch, fathom why some idiots might want to jump on social media and criticise a well-paid, grown-up, professional footballer when he has a shocking game.

But to mock and abuse a 13-year-old disabled boy and reduce him to tears of despair? Why?

This story does have a silver lining, however, which is the way Fulham have taken this shocking incident and turned it on its head.

Not only did they invite Rhys to spend the day with the team, they also got him out on the training pitch going through drills with the club’s goalkeepers. And then, during their match with Bristol City, when they scored a goal, the entire team ran to celebrate with Rhys on the touchline.

But the best gesture by Fulham, one which really made me tear up, was when they made Rhys an honorary member of their first team squad. His image now appears online alongside their other goalkeepers Marek Rodak and Paulo Gazzinga.

As the club’s American defender Tim Ream said: “People see footballers as role models and inspirations. For me, what he’s doing is more of an inspiration than anything any of us could ever do.” 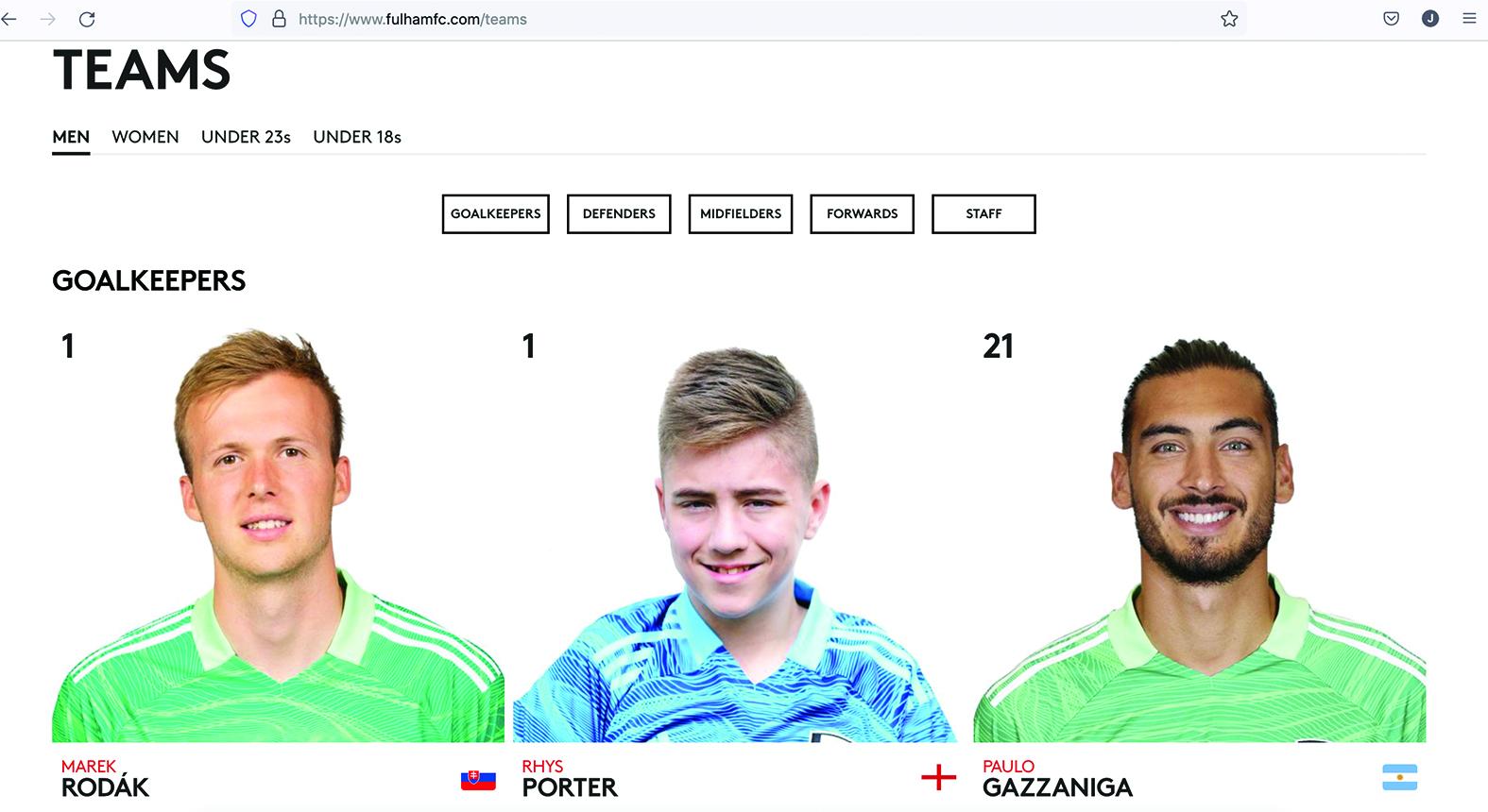 Fulham FC fan Rhys Porter, 13, who suffers from cerebral palsy and epilepsy, has been made an honorary member of the first team squad. His image now appears on the club’s website alongside their goalkeepers Marek Rodak and Paulo Gazzinga. Brilliant work Fulham. Photo: www.fulhamfc.com

But while this particular story does have a reasonably happy ending, what really worries me are those stories that don’t.

Rhys’ predicament happened to be picked up by a professional football club that was in a position to help him make the most of a horrible situation. But how many young people who get online abuse don’t get that sort of support? Hundreds? Thousands? Hundreds of thousands?

How many young people get online abuse [but] don’t get that sort of support? Hundreds? Thousands? Hundreds of thousands?”

I don’t care what some people may say, social media needs to be regulated and it needs to happen now. You should only be allowed to post on any platform if you are prepared to provide proper identification; and then will have to face the consequences if you can’t keep your stupid, misguided and offensive thoughts to yourself.

The concept of social media is great. But allowing it to become a playground for cruel idiots to spout vile abuse is as much as crime as the abuse itself.

It has to change.

Oh, how the British football media make me laugh. On the hypocrisy scale of 1 to 10 they come in somewhere around 312.

Just two weeks ago the media was awash with articles talking about Arsenal’s disastrous start to the season and how Mikel Arteta was an awful manager.

By last Monday, on the back of three victories, the very same manager was being hailed as the best things since sliced bread. One or two articles were even suggesting, after the victory over Tottenham Hotspur, that he is the new Arsene Wenger.

The truth is that Arteta wasn’t the worst manager in the world when Arsenal made their poor start. And he isn’t the best in the world just because they beat struggling Norwich City, Burnley and Spurs.

He is a young manager trying to find his way in a very big league. I still suspect he has bitten off more than he can chew for his first managerial position, but to constantly swap between branding him a failure and a legend isn’t going to help.

Get a little perspective, people.

A working-class lad from a humble background defying the odds to rise to the top of the boxing world in a classic tale of rags to riches.

The Anthony Joshua story has always had a bit of a Rocky feel about it.

Unfortunately, it would now appear that AJ, like the Italian Stallion, has reached that phase of his career when he has allowed his fame and fortune to get in the way of his boxing.

The British boxer lost his world titles last week to Ukrainian challenger Oleksandr Usyk. I don’t want to take anything away from the new champion, of course, but I suspect a lot of this points defeat was down to the fact that AJ has lost his edge.

When he started out, the British boxer was desperate for success. He wanted to become the best, he wanted to prove that people can succeed whatever their background, he wanted to repay his mother for her faith, help and support.

But today he is a very rich man, one of the biggest brands in the sporting universe, a man who was voted the world’s most marketable sportsman and who is regularly seen on TV promoting the likes of Under Armour, Beats and Lucozade.

He has, like that legendary character portrayed by Silvester Stallone, lost his hunger. He is no longer raw and determined but relaxed and satisfied.

At 31, AJ is still a baby in boxing terms. Despite the fact boxers get beaten up for a living, many of them go on fighting well into their 40s, if not their 50s.

And that means the former world champion still has the time not only to regain his belts, but continue on what had looked like a near-certain path to becoming one of the greatest legends in the history of the sport.

But in order to do so, he may need to follow Rocky’s route. Go back to basics, train in dark and dingy gyms, punch a few frozen pigs and tell the marketing people to back off and give him some space.

There will be a rematch against Usyk, probably early next year. But to win it, and get his career back on track, AJ will need to go back to his more humble roots.

Hopefully there is an Apollo Creed in his life who can help him do just that.