A revealing new art exhibition opens this week at 111 Art, presenting the real-life fall-out from a recent broken marriage. University professor Ġorġ Mallia talks about the bold decision to reveal his dark night of the soul through artwork and poetry in his first solo show Rhapsody in Pain. If you’ve ever had your heart broken, or broken someone’s heart, read on.

I first met Professor Ġorġ Mallia in November 2019 at an opening at the same gallery about to host his new show.

We’d been invited along by our mutual friend, 111 Art’s owner, Angelo Dalli (himself doing innovative work in the visual arts sector). Ġorġ was considering an exhibition of his own and he pulled out his phone to show me his latest work. Genuinely impressed at his striking illustrations, I immediately offered to write about them.

But when asked about the inspiration behind his images, he poured out the sorry tale of a recent break-up which had shattered his world.

Though initially taken aback at his candour, I recognised his grief and felt a wave of empathy. I wanted to reassure him it gets easier but the sentiment, although true, may have sounded trite. So instead I told him how much I loved his work, because I do.

As a relative newcomer to Malta, I did not fully appreciate at the time the extent to which Ġorġ is known and respected locally. He’d been introduced to me not as Prof. Mallia but simply as Ġorġ, and he was mercifully free of the airs and graces I so often encounter here in men of his stature.

Ġorġ (I know he prefers first name terms) has been active as a writer and cartoonist for many years. However, he is probably best known through his role at the University of Malta as head of the Department of Media and Communications at the Faculty of Media and Knowledge Sciences.

You’d be forgiven then, for assuming that Ġorġ’s high-profile position is the reason his relationship breakdown is being played out so publicly. But, in fact, the details are coming from Ġorġ himself. 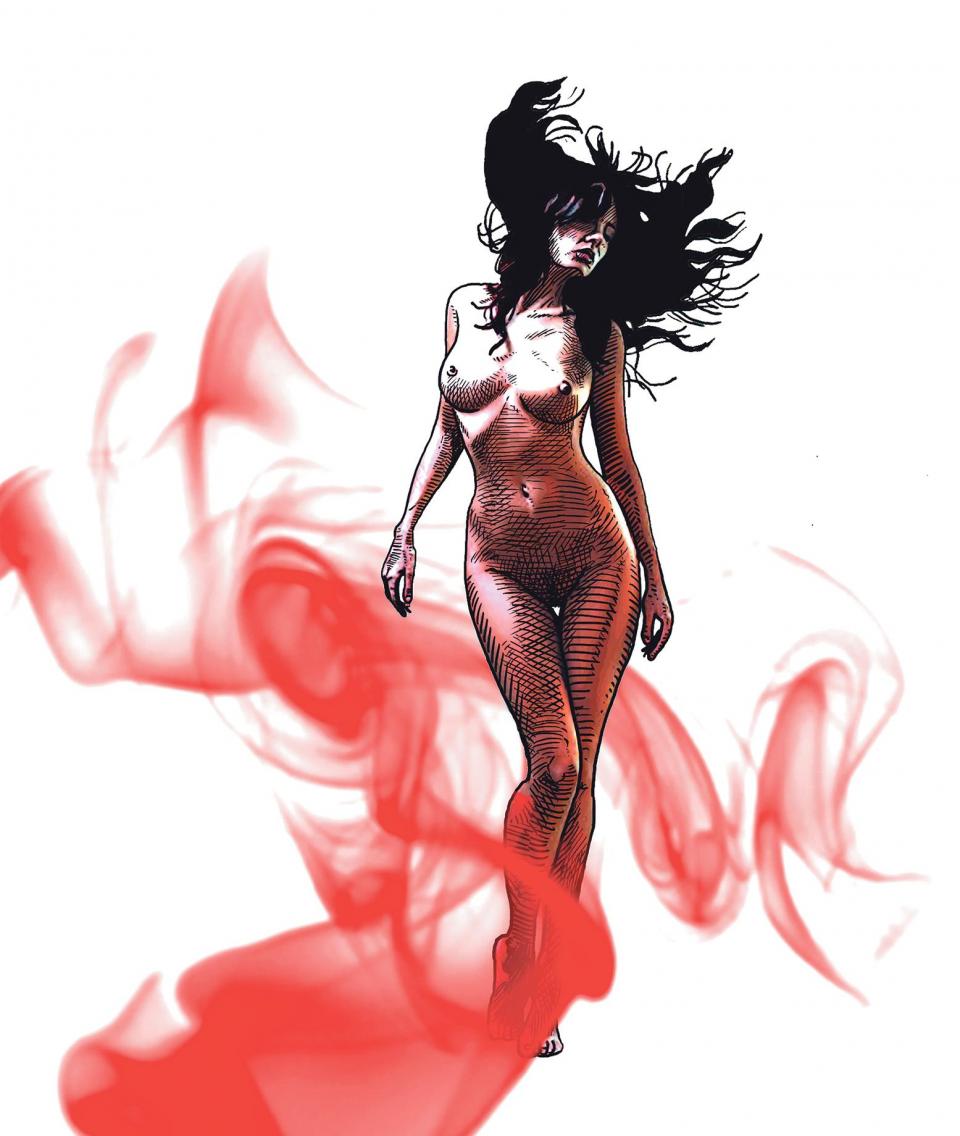 He describes the conscious choice to share his darkest hour as a cathartic release for his emotions which appear to be still quite raw. Given his position and standing, it’s a controversial move. But at a time of high suicide rates, particularly among men, in which we are being encouraged to express our feelings, and to reach out to others for the sake of our mental and emotional health, Ġorġ is arguably modelling very healthy behaviour.

One thing you won’t find in Ġorġ’s work are any direct references to his former wife. She is quite understandably not mentioned by name. Out of respect, and because it simply isn’t necessary, I’ll not do so either. But obviously I did my research, discovering numerous photos of the former couple looking happy and in love. If you’ve ever experienced a painful break-up, you’ll know how such content, forever displayed online and so easily stumble-on-able, can reopen old wounds in the click of a mouse.

Ġorġ refers to his new show as ‘the ex’. In fact, he calls it ‘an ex about the ex’. I was quite tickled by his little word play, as you can see by the title of this article. Of course, Ġorġ is not only an artist but also a writer.

The new artwork in the show is accompanied by a series of intense and deeply personal poems, as well as a recently released book of poetry, My Love Had Eyes of Blue and Dreams – Verses of Love and Pain, documenting his inner anguish in beautifully crafted verse.

As I catch up once again with Ġorġ, I congratulate him on putting together such a dynamic collection at such a testing time, and I ask the burning question...

Ġorġ, how are you feeling?

Life has a way of throwing curve balls at us. With any sudden, unexpected, unwanted life change, there is grief and pain which does not go away quickly. The process of creative production helps salve the soul but when the source of pain is so great, it resurfaces often.

This exhibition seems to represent the closing of a chapter, both in your personal life and creatively. Would you agree with this assessment and what part has making this work played in this chapter?

It definitely marks the closing of a very important chapter in my personal life; the brutal end of a very cherished, long-term love. But, it has resulted in the start of a new journey as my innate creativity rushed in to fill the vacuum. The result was a lot of writing and a lot of digital painting.

Why do you think artists, musicians, writers and performers turn to the creative process for healing, do you think it actually works and if so, how?

“Grief is very destructive but it can also channel destructive emotions to productive ends. The grief is too overwhelming to be healed by the creative process alone but that process creates stepping stones, hopefully to a place where the grief hurts less than it does right now.”

Wresting control from the confusion and devastationof heartbreak

In the poetry and writings which accompany the artwork for this exhibition, pardon the expression, but you are quite literally an open book. What made you decide to share the intimate details of your private heartbreak so publicly, what has been the result and have you had any cause to regret doing so?

I have always been creatively open about my thoughts and feelings, both in moments of intense happiness and also in moments of abject sadness. Society often demands that we (and us males especially) ‘man up’ and bottle up whatever punches to the stomach we get. 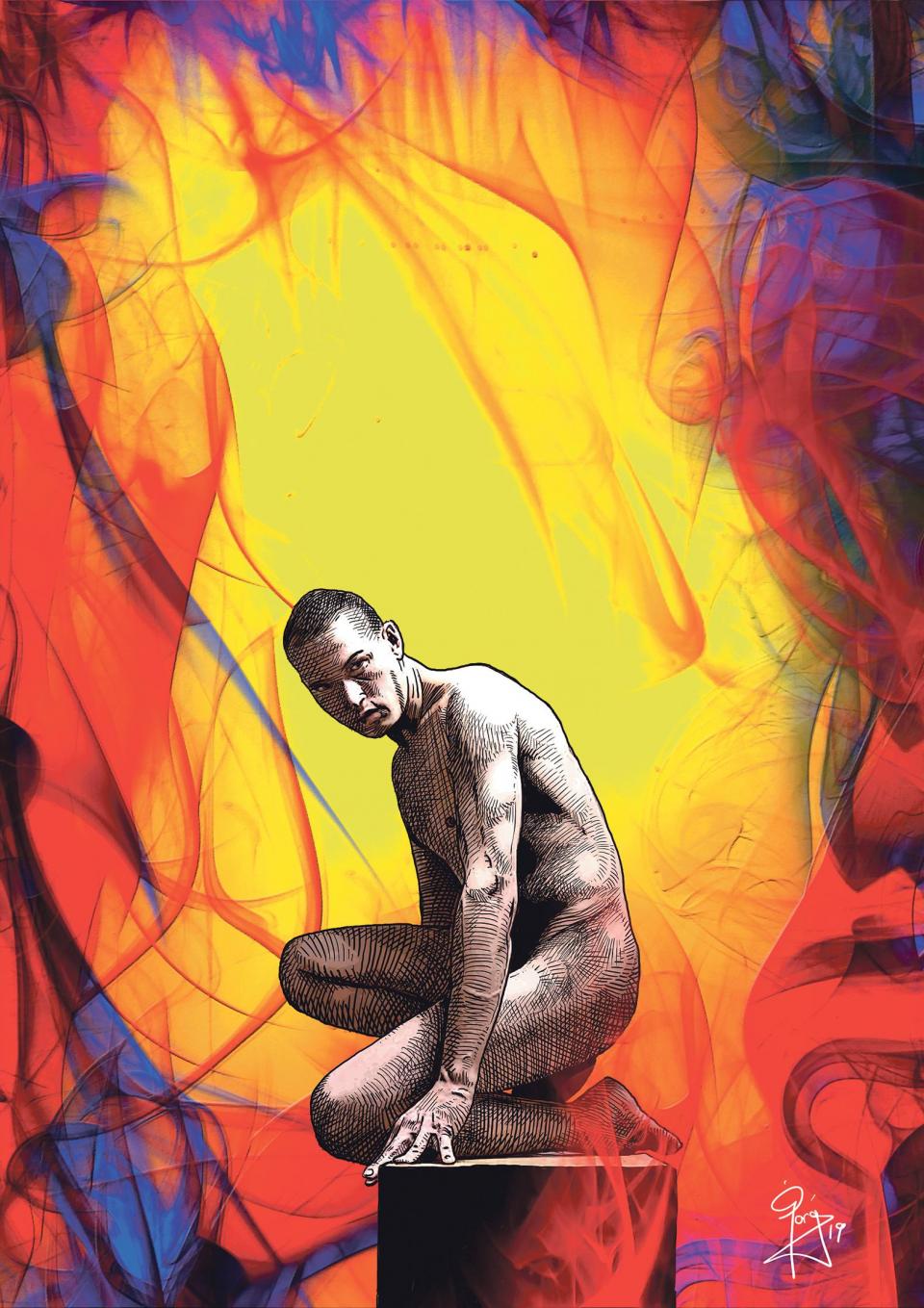 Contemplation: the contemplation of horrors casts an obscuring shadow on what light is cast by hope.

I wrote blogs which were picked up by a lot of people who emoted, or sympathised. Professionally and artistically I am a bit of a public person, so talking about feelings is not unusual. I’ve only had positive feedback, but even if I had been berated for it, I would definitely not have regretted it.

Your background as a cartoonist is very evident in the ‘graphic novel’ style of your figures and the poses you position them in. Can you explain your creative process from idea to finished piece?

Indeed. The figures are ‘posed’ and the colours are primary. The classical nudes are in postures that indicate their being in the throes of whatever emotion I was trying to depict, backed by a ‘splashed’ representation of that emotion. The inspiration is clear in the titles of each work.

Technically, the backdrop is created in Adobe Photoshop, using different brushes and layer styles to project the mood as clearly as possible through lines, circles and shapes. Then the figures are drawn either on an iPad Pro or on a Cintiq tablet, and coloured in using Photoshop, with very basic, almost flat, comic-like colouring.

Computer-generated artwork can challenge our notions of what constitutes an ‘original’ or ‘limited edition print’. How would you describe your digital pieces?

The only difference between digital painting and physical painting is the absence of a physical ‘original’. A single print can be made, making it as close to it being an original as possible. I have gone for an extremely limited edition set of prints to retain exclusivity, with just three of each image. Digital art tools are as valid as a physical brush and paint.

What do you feel you have accomplished with this show and how do you hope it will be received by the visiting public?

This will be a very personal exhibition, projecting the darkest hours in my life. I would like people to feel them... to emote with them. I’m after creating an emotional aesthetic experience.

Creatively speaking, what lies in store for you next?

I have my ongoing writing and illustration projects: two children’s books and a book of micro-stories presenting 100 fictional lives. I will definitely paint again. One thing is certain... I cannot not create.

A short ‘open studio’ video accompanies this interview and will be posted today on the Allura Facebook page www.facebook. com/AlluraMalta and on timesofmalta.com. In this video, we visit Ġorġ in his studio and chat with him about the creative process behind his work. He shows us how he draws, paints and composes his images using drawing tablets and Photoshop.

Rhapsody in Pain opens at 111 Art Gallery on March 6 at 7pm and will run until March 20.  Limited edition prints will be available for purchase. For more information, visit www.gorgmallia.com or 111 Art on Facebook.