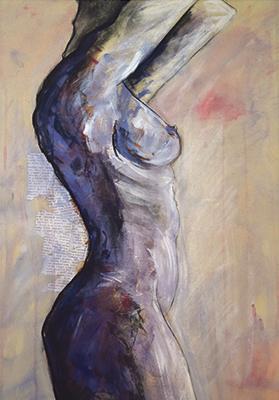 Holding your very first solo exhibition is exciting yet daunting at the same time. A young artist whose work has been assessed by teachers at school and exams, and enjoyed by family and friends, would naturally be propelled in this direction especially while following more rigorous training in the field. This is the case for Thomas Scerri’s (b. 1990) exhibition of paintings, titled Deceit.

Scerri is new to Malta’s artistic scene and he also works in photography, illustration and graphic design. His talent for art was nurtured from a young age, but as often happens, art took a back seat while he pursued his studies as a mechanical engineer at Mcast. Following this and feeling the natural need to return to the arts, Scerri obtained a Diploma in Design Foundation Studies and is currently reading for a Bachelor of Arts degree in Digital Arts, both at the University of Malta. These courses have allowed him to venture into traditional art and digital media.

The intimate selection of six paintings that makes up Deceit delves into the nude female human form. His interest in the human figure lay dormant until it was reignited during a study unit Scerri recently attended. 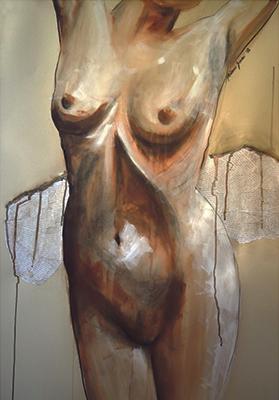 Executed in acrylics, charcoal and collage on paper, these works clearly expound on the human form above everything else. Two reclining figures are seen in full, while the rest are details of torsos of standing figures the contours of which are outlined by the black charcoal. And never are the figures’ faces revealed: Scerri is not interested in portraiture in this collection.

The support for these paintings has been primed and prepared to add a mysterious layer to the figure portrayed. This preparation consists of cut-outs from Maltese texts that are undecipherable, because they have been torn up and/or partly painted over making them impossible to read comprehensively. Further to this, the omnipresent bleeding paint, which was the last element to be applied, adds different layers of meaning, and thus to the ‘deceiving’ nature of these works. I use the word ‘deceiving’ because it was Scerri’s intention ‘to deceive’ the viewer and play with his consciousness. He wishes you to perceive the beauty of the female form, while perhaps not quickly realising the subliminal connotation underlining this series.

Scerri’s compositions are rather attractive, simple and uncomplicated, and provide a promising start and a commendable effort

Scerri’s compositions are rather attractive, simple and uncomplicated, and provide a promising start and a commendable effort. That said, it is clear from some of the weaker works that the human form could have been studied in greater depth. Notwithstanding this, two of the paintings do reveal his artistic potential. These are two of the standing nudes – those where the frontal nude’s head that is only barely hinted at tilts to the left and right respectively. 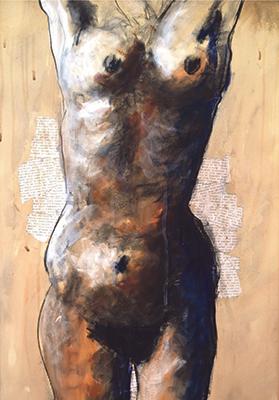 The human body has recently taken centre stage in the local art scene, perhaps filling a historic artistic void that artists feel is missing. And there are now several nude figure drawing classes held throughout the island that artists may avail themselves of, a taboo that has only recently been lifted in Malta. Studying from a life model was a basic and central form of artistic training that local 20th-century artists struggled to achieve and were hindered by. Artists tried to mitigate the problem by setting up their own classes. It was Josef Kalleya who was bold enough to set up the Scuola Libera del Nudo in the 1930s. Artists met in Kalleya’s Valletta studio, a reaction to the banishing of the nude at the public Government School of Art. Kalleya’s class was, however, short-lived.

This exhibition evidences Scerri’s talent and creativity, both of which may allow him to become an able painter. There is potential with him pursuing the study of the human form if this is nurtured further. It is brave of him to exhibit his work as he has done in the snug gallery space at VGB Art  in Valletta.