The world-famous François-Marie Arouet (1694-1778), known as Voltaire, wrote that “nothing is better known than the Siege of Malta”. It is a fact that many publications in the form of books and articles have been written about this very important episode in the continuous Mediterranean struggle between the Cross and the Crescent. It is also a fact that many Maltese can vaguely speak about the heroic defence of Fort St Elmo and the final victory of September 1565. However, very few ever bother to think about the events of the very beginning of the siege. 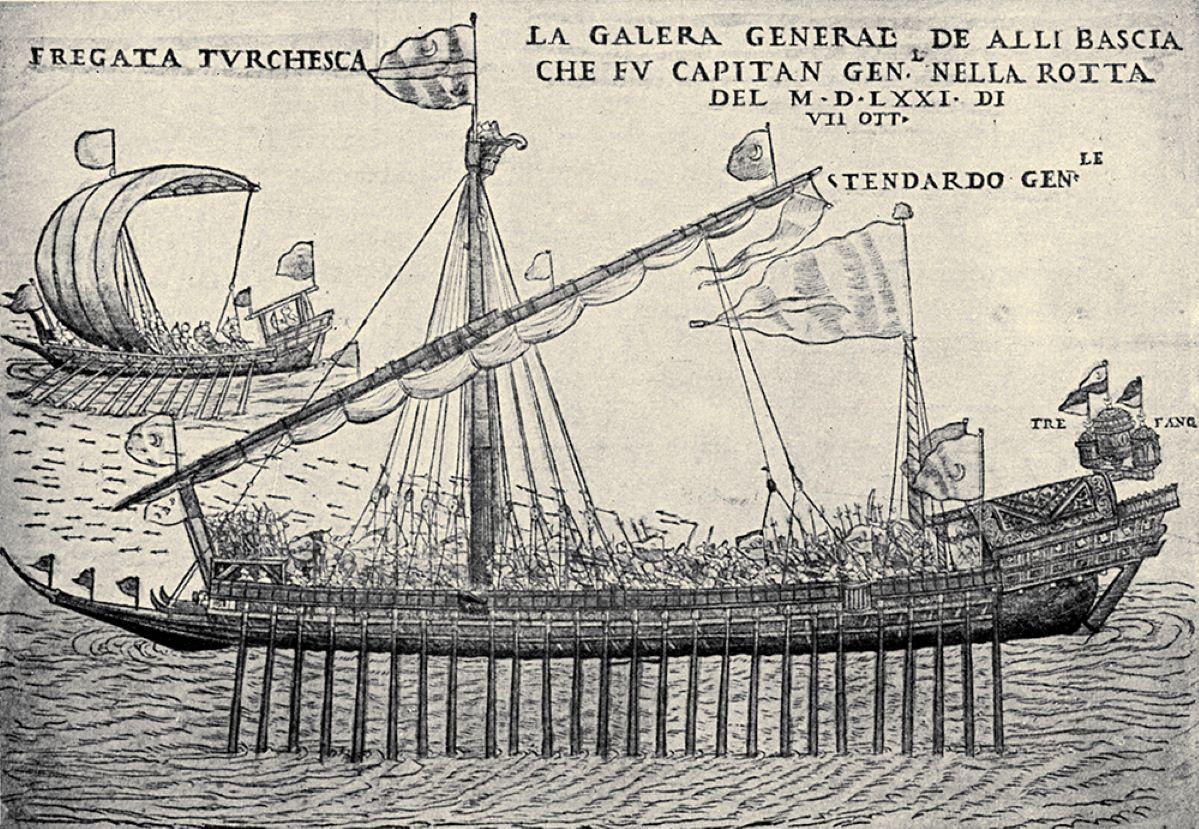 Friday, May 18, 1565, was the date of one of Malta’s appointments with destiny and worldwide fame. For it was on this particular date that the first Turkish vessels, conveying the great Turkish army sent to attack and capture Malta, were first sighted. Approaching from east-northeast, the Ottoman fleet was about 20 to 25 kilometres off the Maltese islands. Guns and smoke signals gave the bitter news to the Maltese and Gozitans.

The Turkish attack on Malta had been expected for a number of years. The 1551 Turkish incursion – resulting in the sacking of Gozo and the enslavement of practically all its population – had been a missed opportunity of taking over Malta in favour of capturing Tripoli. Fourteen years had passed, a period in which the Order of St John had continued to strengthen the islands’ defences, including the construction of Fort St Elmo to dominate the entrances of the two harbours, and the new fortified city of Senglea as an extension of Fort St Michael, both fortresses having been erected in 1552. The Order was also thinking seriously of building a new fortified city on Mount Sceberras (where Valletta now stands) but had been impeded from carrying out these plans by lack of funds. 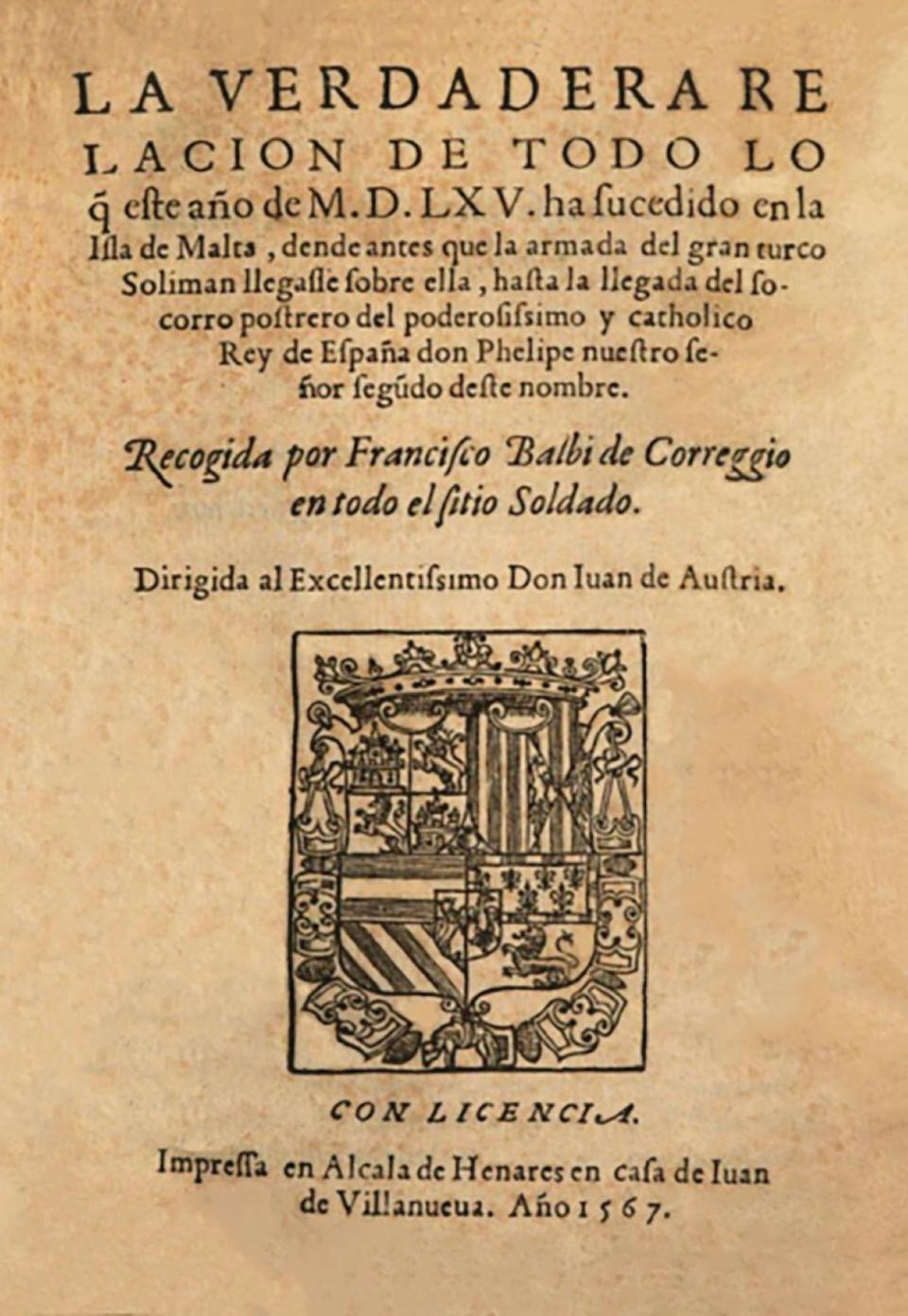 The Turks certainly knew all about the strengthening of the Maltese defences. Their aim was to dominate the approaches to the western basin of the Mediterranean and, to achieve this, they had to capture the Maltese islands. If the projected new city on Mount Sceberras was allowed to materialise, it would be very difficult in future for the Turks to dislodge the Knights from such a defensive position.

Giacomo Bosio, the knight historian of the Order, wrote that two highly-ranked Muslim prisoners in Malta had warned the Turkish authorities about the Order’s plans for the new city and that its construction would make the islands well-nigh impregnable. The Turkish Sultan Suleiman II, known as The Magnificent, probably rued the missed opportunity of 1551 and resolved to make amends. 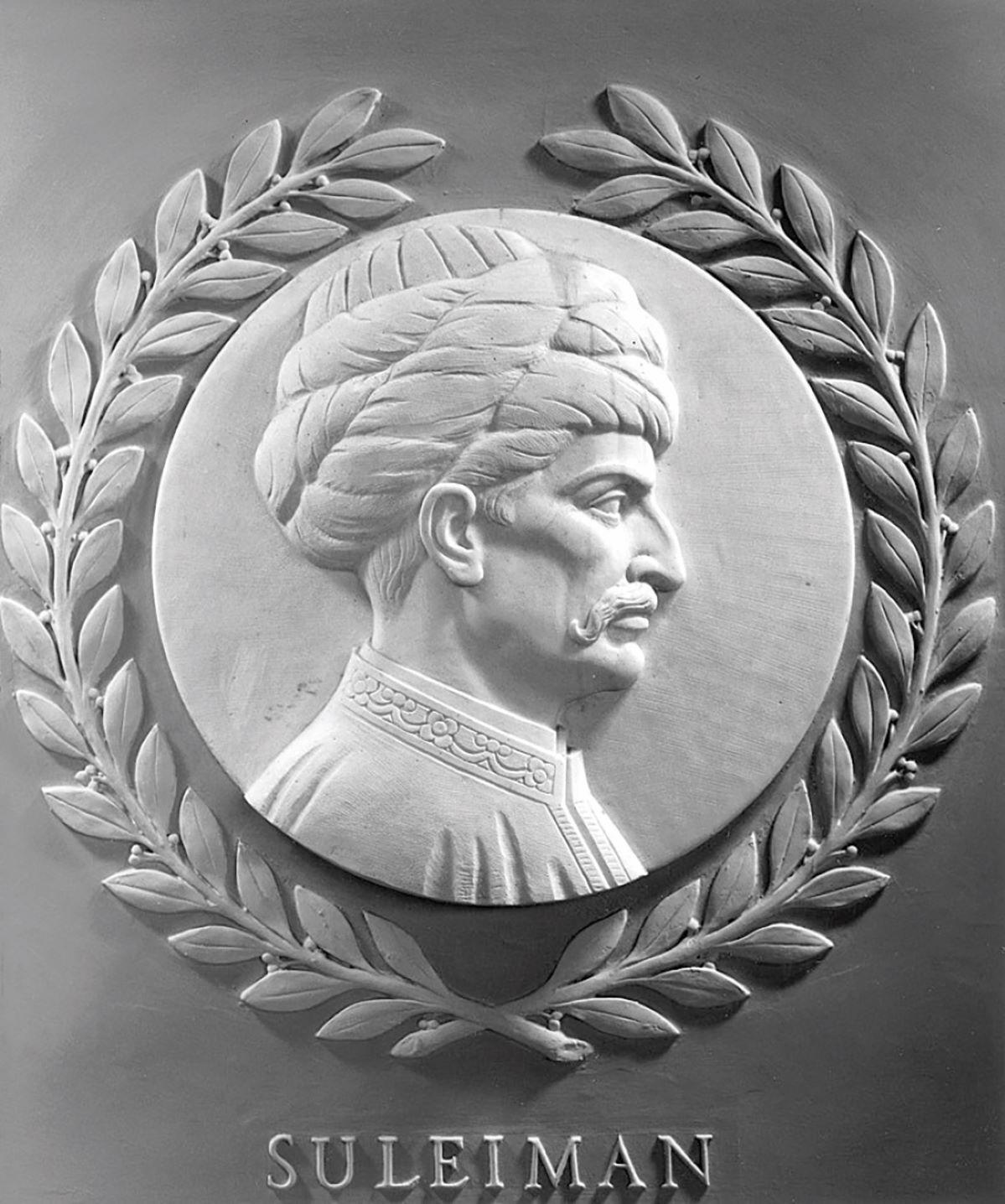 Sultan Suleiman II (1494-1566), known as The Magnificent, in an alto relief housed at the US Capitol. Photo: Dailyrabak.com 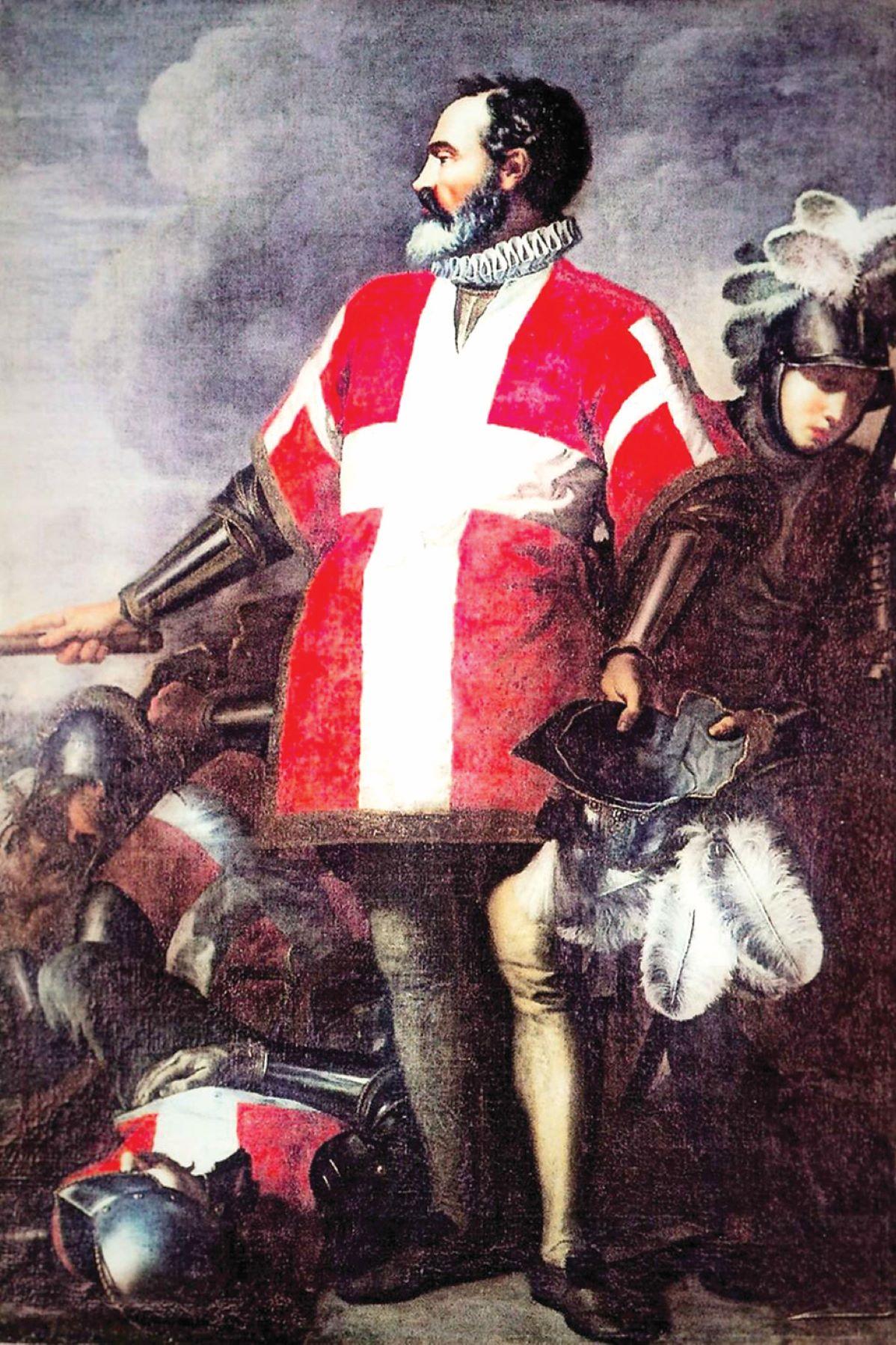 News of Turkish preparations at Constantinople had been filtering in since the spring of 1563. As time wore on, it became clear that the Turkish objective was Malta. Grand Master Jean de Valette, therefore, also made his own preparations: all the knights were ordered back to the island; people who were useless for fighting were offered free passage to relative safety in Sicily; food and ammunition were stockpiled.

Yet, notwithstanding all these preparations, the islands seemed ill-prepared for the daunting task ahead. The main strongholds of Birgu (Vittoriosa), Senglea and Fort St Elmo were surrounded by high ground, while the defences of Mdina were woefully weak. The number of fighting men was not too impressive either: between 6,000 and 7,000 men, including about 3,000 Spanish soldiers and an equal number of Maltese irregulars, together with 600 members of the Order, probably the hard, experienced core of the defenders, although the Maltese were also hardened fighters.

De Valette was promised help by the Viceroy of Sicily, Don Garcia de Toledo but, failing his arrival, he was expected to hold out against a far larger Turkish force at least till September, the month which – for meteorological reasons – heralded the end of the effective fighting season in the Mediterranean. It is difficult to assess the exact strength of the Turkish force. Eyewitness Francisco Balbi de Correggio calculated a total of about 29,000 fighting men, including 6,300 Janissaries, the elite corps of the Turkish Empire, but excluding the Muslim corsairs from North Africa who also played their part in the siege. This would give a total estimate of about 40,000 troops. J. von Hammer, in his History of the Turkish Empire, lists about 31,000 men, including 4,500 Janissaries. Modern historians consider the figure of about 30,000 fighting men, including the corsairs, as being reliable. 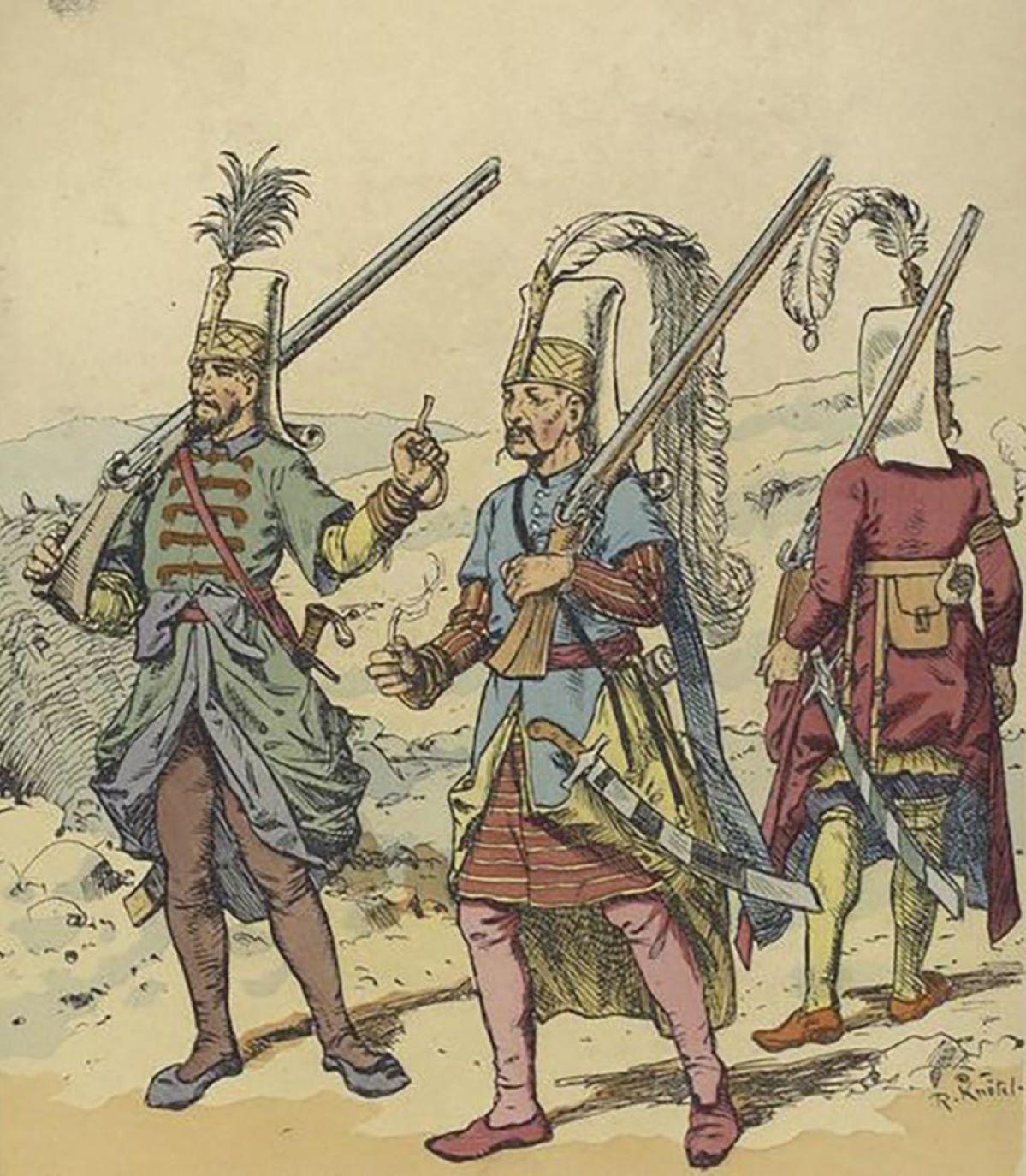 Typical 16th-century Janissaries. Between 4,000 and 6,000 of them took part in the Great Siege. Photo: En.Wikipedia.org 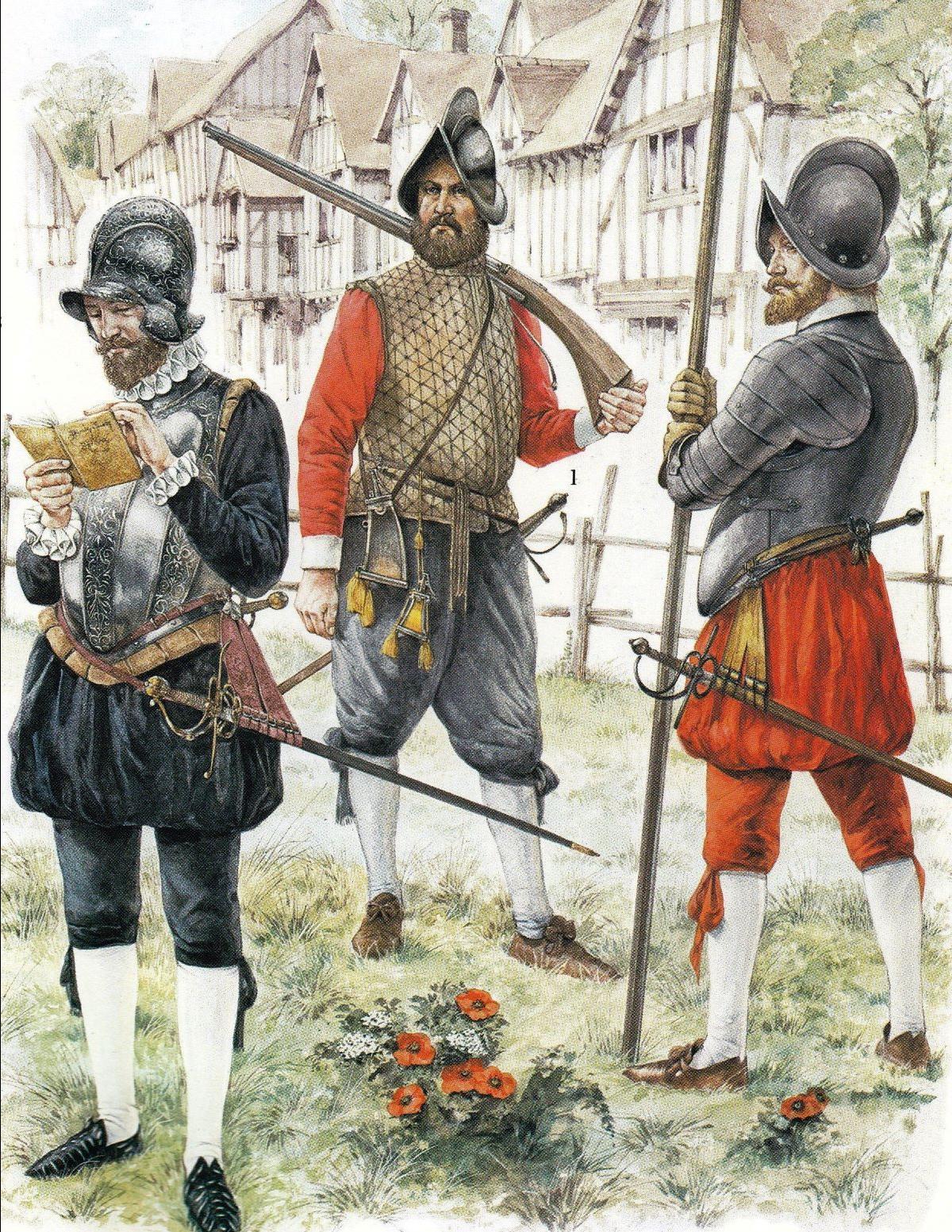 The Ottoman fleet accounted for about 190 vessels, the great majority of which were galleys. Together with the fighting men, these ships carried on board an estimated 80,000 rounds of shot, 150 hundredweight of powder for cannon and siege weapons, and 250 hundredweight of powder for arquebuses and small arms. All provisions and other necessities such as wool, cotton, cables and tents had perforce to be transported as well since the Turks knew that all military operations would have to be conducted on a barren terrain. 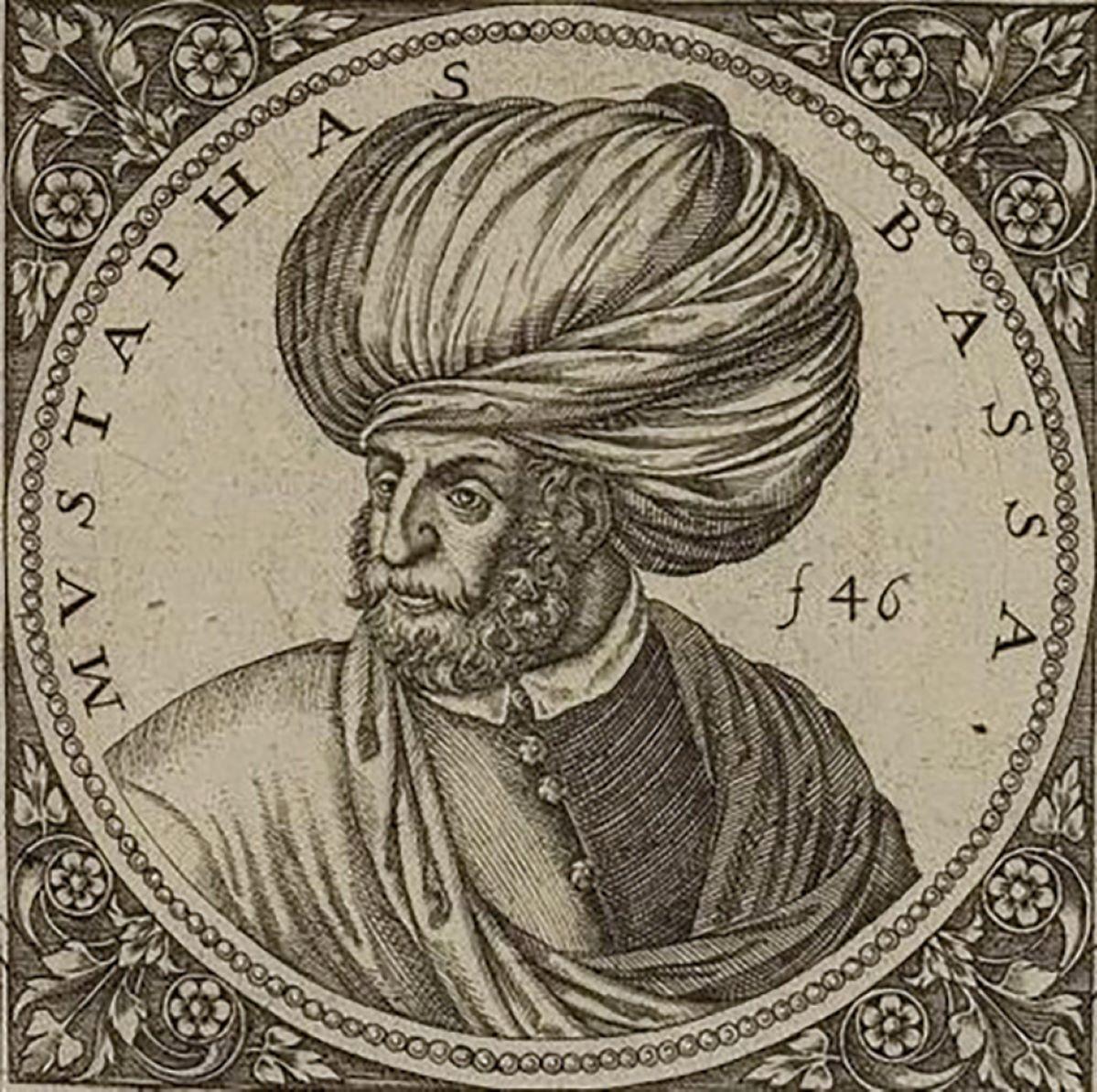 Mustapha Pashà (c.1500-80), commander of the Turkish land forces during the Great Siege of 1565. Photo: En.Wikipedia.org 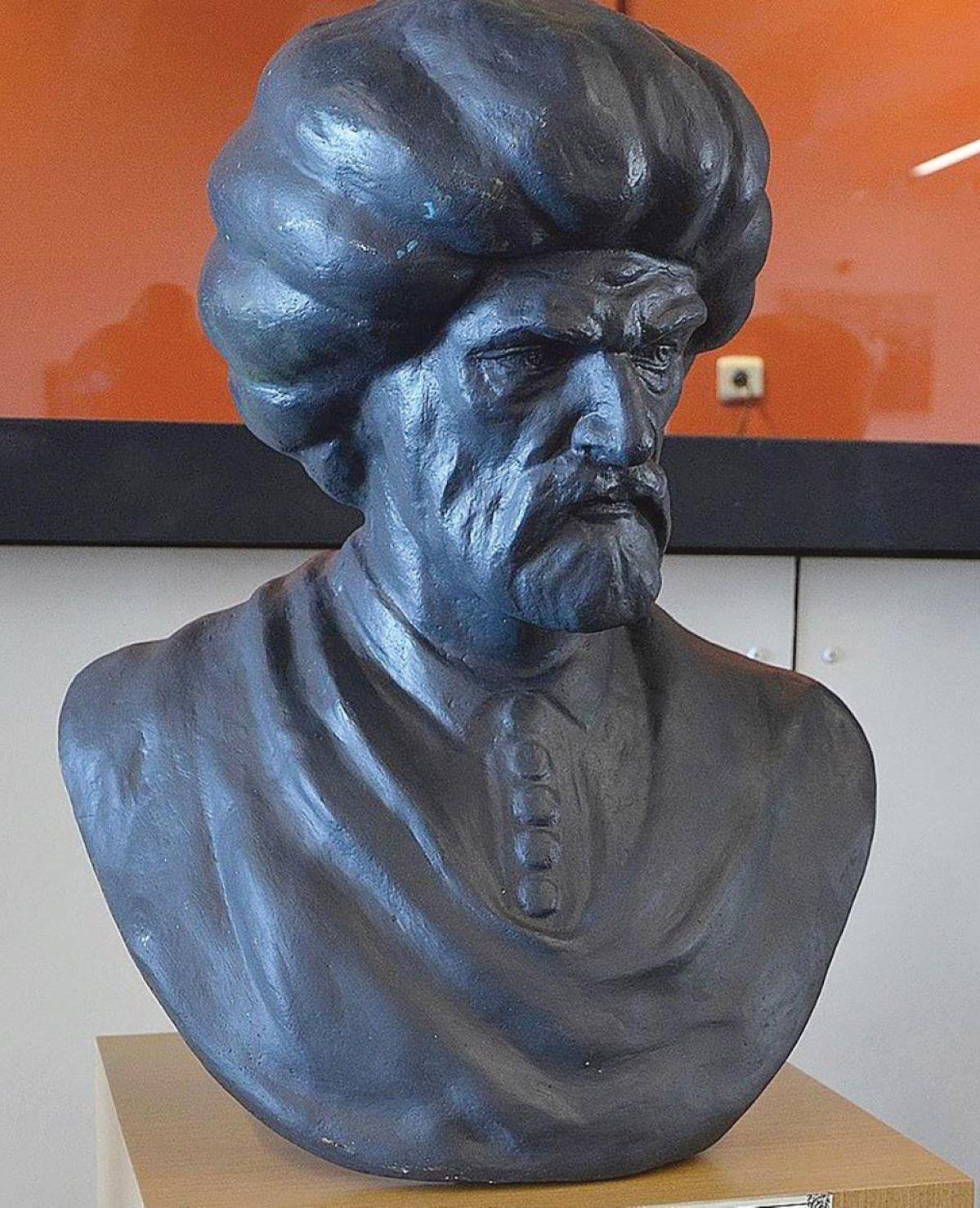 Bust of Pialí Pashà (c.1515-68), admiral of the Turkish fleet during the Great Siege. The bust is housed at the Istanbul Maritime Museum. Photo: En.Wikipedia.org

The sultan appointed Pialí Pashà in command of the fleet, while Mustaphà Pashà, a veteran of the Hungarian wars, was handed military command. Another famed Muslim leader, the corsair Dragut Rais, was to rendezvous with them in Malta.

On its arrival, the Turkish fleet waited for some time off Marsaxlokk, till a brief reconnoitre was carried out, and then proceeded to anchor off Mġarr for the night. These movements were continually kept under surveillance by the Order’s cavalry and news of the Turkish arrival was hastily despatched to the Sicilian viceroy at Messina. In the meantime, throughout the day, the population hurriedly gathered their belongings, including livestock, and hastened to find shelter behind the fortifications.

Throughout the day, the population hurriedly gathered their belongings, including livestock, and hastened to find shelter behind the fortifications

Detachments of men were busily poisoning the wells, especially at Marsa, in an effort to deny their use to the enemy. Later on, dysentery did afflict the Turkish forces and the defenders’ actions may have contributed to the outbreak of the malady. However, the invaders still managed to use the water supply of Marsa, where their main camp was eventually set up.

Across the narrow neck of water between Fort St Angelo and Isola Point (Senglea), a great chain was adjusted. Its purpose was to bar the entrance of Galley Creek (now called Dockyard Creek) and deny access to the enemy in case of seaborne attacks. This 200-metre-long chain, especially made in Venice, had been embedded on the Senglea side and brought up into position by means of an enormous capstan at the base of Fort St Angelo. It was then properly held in place by means of wooden pontoons and rafts.

In the early hours of May 19, the Turkish fleet started moving back to Marsaxlokk Bay. By midday, Muslim contingents had begun to land and, by evening, about 3,000 men were ashore and advancing on Żejtun in the hope of capturing slaves and livestock. However, a Christian cavalry detachment ran into some Turkish advance patrols. In the ensuing skirmish, the French Knight Adrien de la Riviere, and the Portuguese novice Bartholomeo Faraone, were captured by the Turks. They were tortured for information the next day and they purposely declared (falsely, as it turned out) that the weakest point in the Order’s defences was the post of Castile at Birgu. 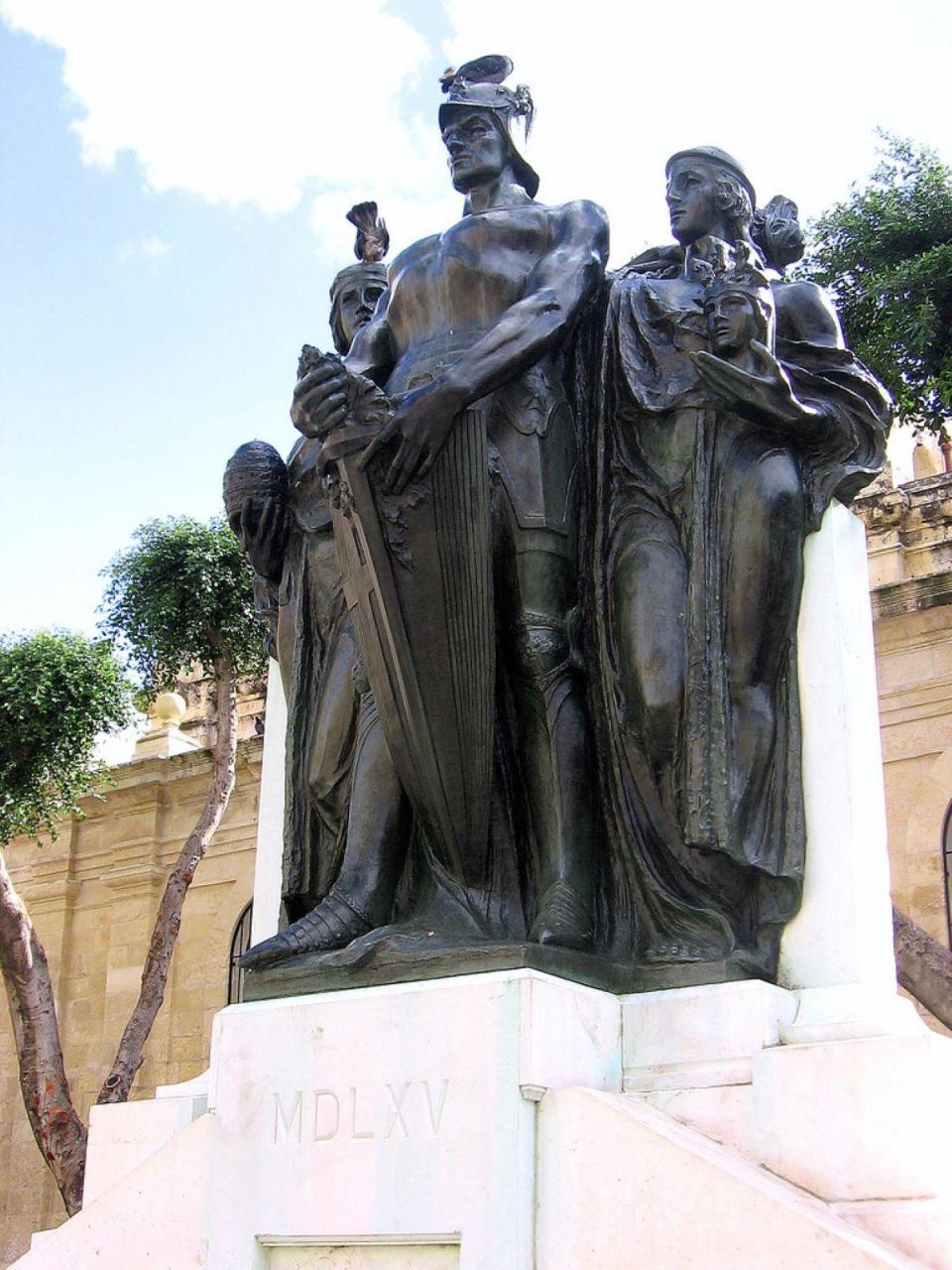 Monument to the Great Siege by Antonio Sciortino (1879-1947) at Great Siege Square, Valletta, in front of the law courts.

Consequently, Mustaphà ordered an attack on the post on May 21. Meanwhile, the Turkish soldiery spread unopposed over the whole south of the island and indulged in some skirmishes with the Christian cavalry. De Valette, seeing that he was heavily outnumbered, would not risk battle on an open field but decided to defend his positions from the shelter of his fortifications where he stood a much more reasonable chance of final victory. He had chosen the right course of action.

When the Turks advanced to attack the post of Castile, the defenders sallied forth from Birgu and Senglea and engaged the enemy. Weight of numbers began to tell, and the Christians had to retire to the safety of the walls, at the same time realising that no such future sorties could be permitted. However, it was clear to the experienced Mustaphà that the landward defences were strong, well-defended and adequately protected by guns. He ordered the death of the two prisoners for lying to him.

The Great Siege of 1565 had begun in earnest.