Limestone dust may stir up thoughts of air pollution but two designers have managed to mould it into furniture, giving the waste material a new purpose.

“We wanted to combine our experience in innovative design with our knowledge of materials to create a collection of functional home objects that span past and present by using a traditional material in a futuristic way,” said Susannah Mifsud, co-founder of creative design studio Floating World.

Together with her partner Matt Mondini, they identified limestone dust, a by-product of the quarrying process, as having “the potential to be reimagined”.

When they came up with the idea to use limestone dust and started to experiment with it, the designers visited quarries and noticed it was only occasionally used as a grouting, for ‘fili’, when construction was done in stone.

Otherwise, it just collected in piles at the quarry and has no other significant use.

Drawing on their knowledge of casting, they developed an innovative composite material that allows for a range of forms and applications, while still retaining the qualities of limestone that attracted them to it in the first place. 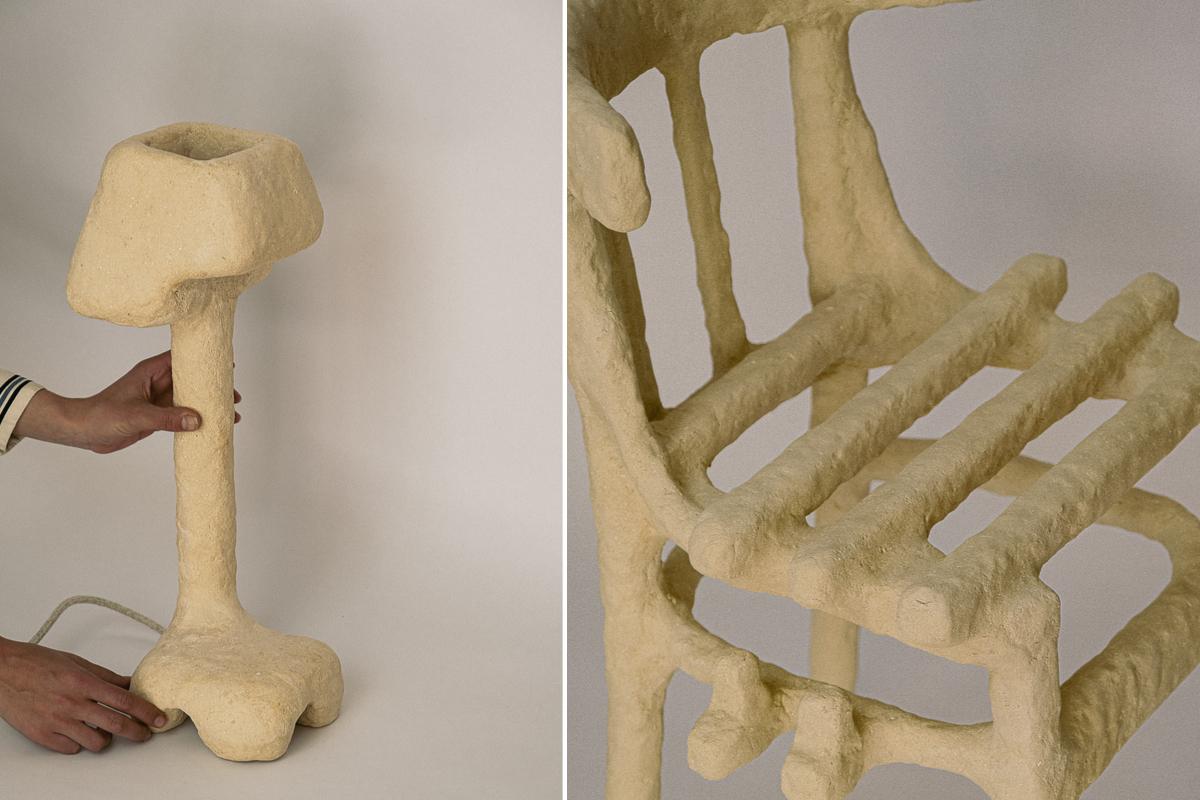 A lamp and a chair made out of limestone dust.

Mondini’s background in fabrication meant he was familiar with the technique of mixing aggregates with binders to form composite materials.

Nevertheless, they spent almost five months working with the limestone dust in different ways to understand its many properties, mixing it with various binders and testing out ratios for a wider range of forms and applications.

The methods used to develop the material dictated the way they designed each piece, said Mifsud, explaining that the new composite gave them the opportunity to “work limestone in new and unusual ways” – from shaping and rolling it like dough to forming it like clay, and even painting and pouring it on like plaster.

The result is the Limestone Home Objects Collection, which is made up of a cubby shelf, a set of bowls, a planter, a lamp, a chair and a side table. 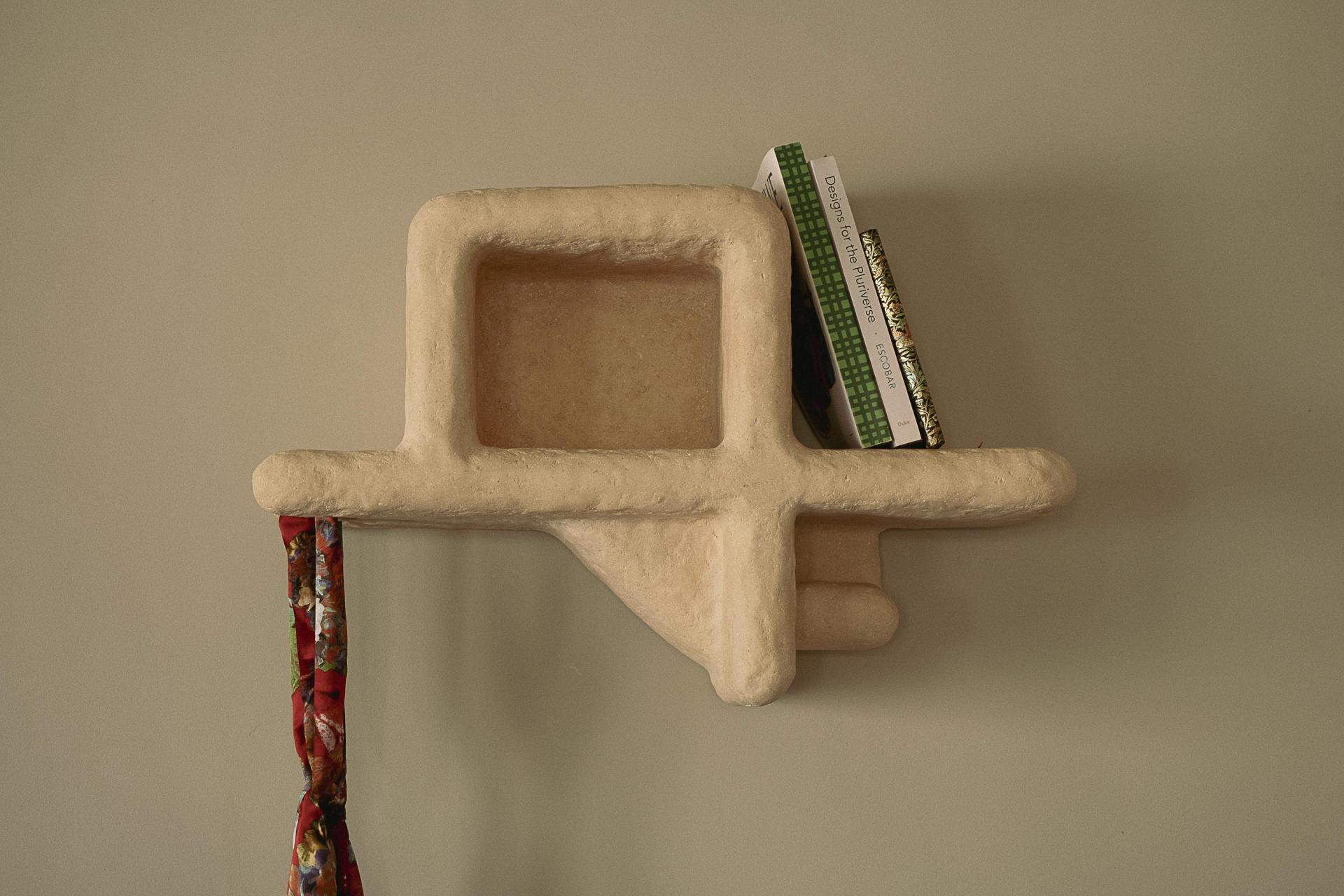 The limestone dust is usually used for grouting, not as a bookshelf.

Titled ‘An Island Where Limestone Pretends to Grow’, the collection “looks to the future while having its roots in the island’s past,” Mifsud said.

Its designers were attracted to limestone not only for its golden hue and visual beauty, but also for its “archetypal significance”, she continued.

“From huge stone slabs at Hagar Qim to austere medieval chapels and intricate baroque cathedrals built by the knights, Malta’s history can be traced in limestone.“

It is the common thread that winds through the island’s architectonic past and forms the backdrop for daily life,” Mifsud explained about the concept behind the project.

Dust is often associated with the negative aspects of construction, but Mifsud maintained it was a designer’s job to “find opportunities in these problems, especially in today’s world, with an increased awareness in environment and waste issues”.

When searching for materials to work with, designers should be looking locally for ways to repurpose, reuse and recycle waste, she insisted.

“With this project, the most important aspect was the concept of circular design; giving limestone dust, especially since it is a finite material, a new lifecycle – one that has various new forms.”

An ode to the island

The recently set-up creative design studio, Floating World, is interested in the intersection of art and design – an area Mondini and Mifsud moved into despite both having a background in architecture.

“We were interested in exploring the middle ground between the manmade and the natural, the rectilinear and the curvilinear, the machine-cut quarry face and the windblown sea-shaped cliff face,” they said.

The collection fuses their material research with their experience of living on an island “where limestone pretends to grow”, and Floating World's Limestone Home Objects are an ode to the land itself.

"It has given us the opportunity to develop and test our ideas at a level we were not able to do in the past and thoroughly dive into the process,” they continued about the full-scale furniture collection.

“The collectible designs blur the line between a sculptural and a furniture piece, in line with the studio’s focus on craft and material processes, with each item being handmade and unique,” they explained.

The idea is to introduce this type of collectible design into people’s homes, so mass producing is not on the cards.

But Floating World, where craftsmanship plays a major role in design, is aiming to establish itself in the global collectible design industry.

The collection will be on display between Friday and Sunday at the Malta Society of Arts in Valletta.