Men proudly cradling small, caged songbirds trapped in the most minute of gabjetti used to be a common sight in village squares in Malta up to a few years ago. This manifestation of machismo, in a miniscule country stifled by cruel traditions, still rears its ugly head to this very day. A walk in the diminishing countryside is many a time marred by threats from trappers using these small birds in these cages as baits to attract other innocent victims to the most vicious of prisons.

The goldfinch is a bird prized by these men who often display a misplaced affection for the hapless bird and think that imprisonment is a relief for their feathered friend. A refuge is thus provided for the bird and its life cannot be menaced by lack of food and water or by birds of prey. One can surmise that, for these men, our micro-country’s insular mentality, coupled with their conditioned allegiance to one of the two political tribes, provides safety nets for the incolumity of their ‘pastime’. The finch sings its heart out notwithstanding its caged predicament to the joy of its dumb jailers. 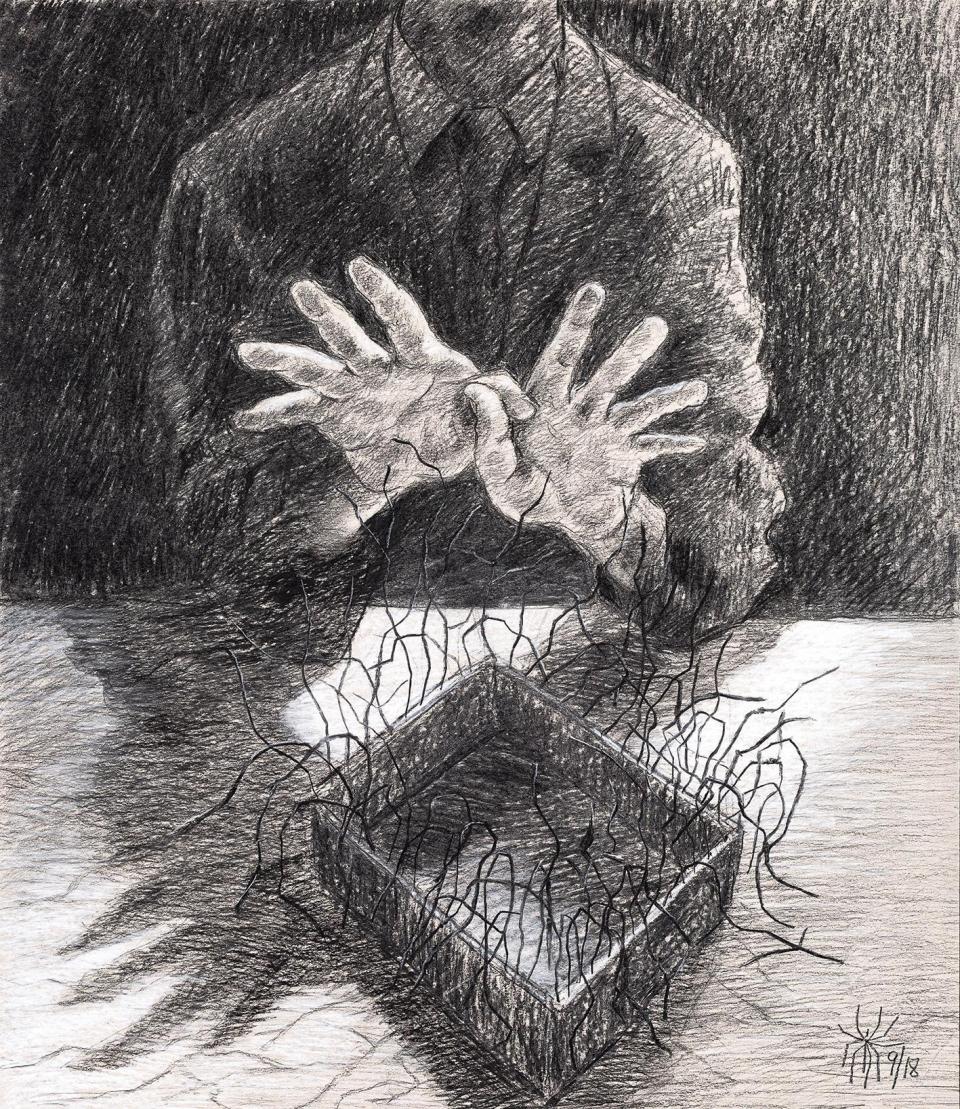 Joseph Farrugia’s exhibition of drawings is inspired by an iconography that has its origins in this warped tradition. The Goldfinch is brutal in its honesty and reflects the attitude of impunity that is a distinguishing symptom of what went wrong in this island nation. The callous murder of investigative journalist Daphne Caruana Galizia three years ago was followed by an aftermath of ineptitude, cover-ups and derailment of justice. This instilled in the artist a deep-seated rage and the necessity to exhibit after years of relative hibernation. Farrugia used to be an active protagonist in the Maltese art sphere of the 1990s but since then had refrained from embarking on solo exhibitions.

The 30 works that are The Goldfinch series constitute a narrative, chronicling the dismally abject saga of the recent history of our country.

The Songs that Travelled Far and Wide shows Caruana Galizia as a goldfinch, singing her heart out in a stream of revelations that used to be her blog, Running Commentary. Farrugia comments on particularly salient moments in which our country’s democratic credentials were downtrodden and ridiculed.

The public was treated like nincompoops and fed hogwash in an attempt to dehumanise Caruana Galizia even after her assassination. Farrugia refers to these politically-appointed agents of misinformation in an eloquent painting, Trolls. The pestilent creatures parrot predetermined agendas on social media and newspaper comment boards and try to pass them on as gospel truth in an effort to dispel the credibility of the journalist through brainless dogmatic noise. 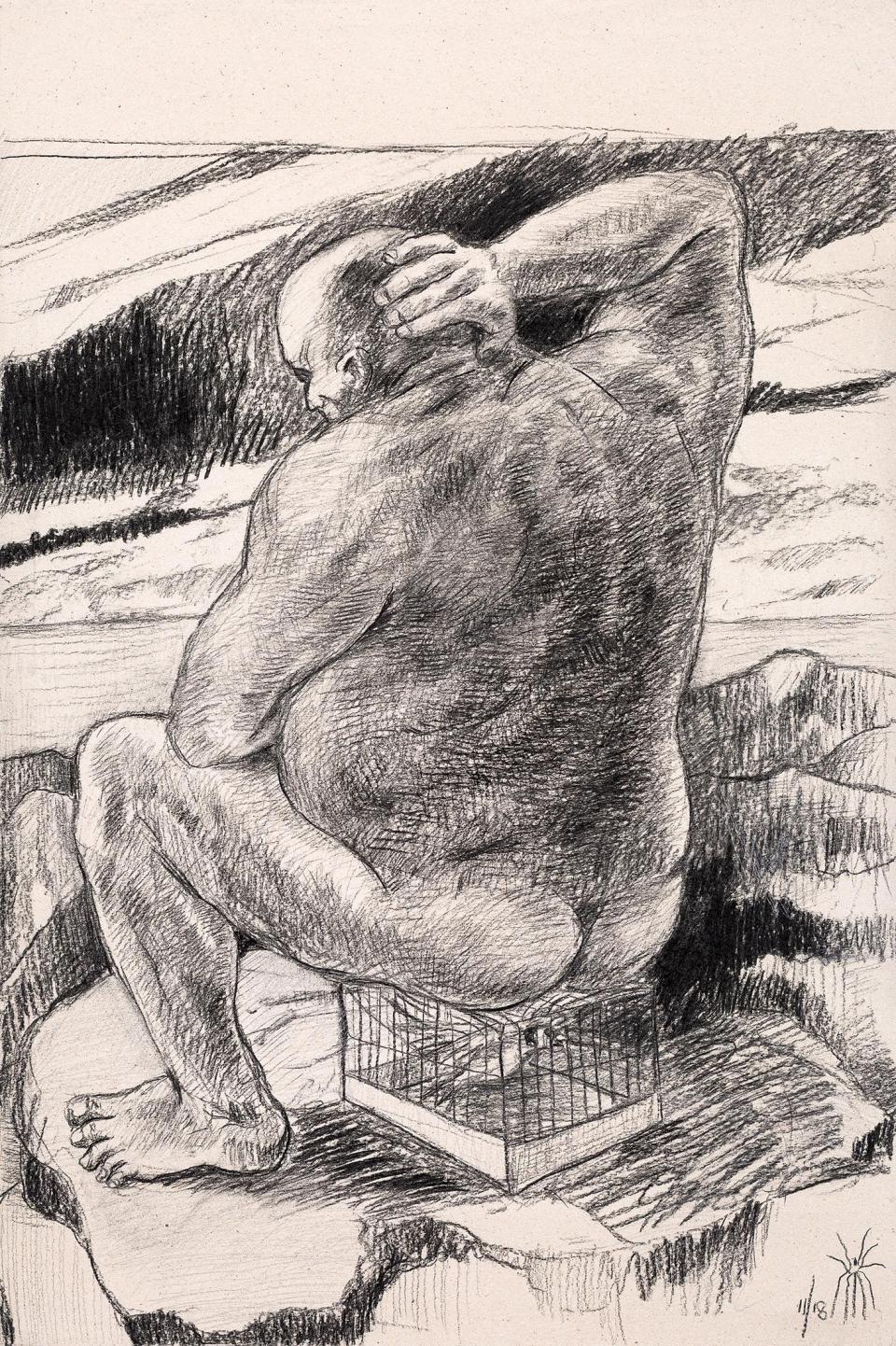 Truth disguised as black humour was a winning formula for French artist Roland Topor, just as much as it is for Farrugia. The stream of news from reputable sources and the hearsay that antagonised the ‘official’ declarations by the authorities is ironically interpreted via very symbolic and sometimes surrealistic compositions. The ‘cartoonish’ character of the works provides a more potent delivery of message. Through the sincere depiction of grotesquely tragic situations, the absurdity and unreality of the horrendous act acquires more relevance.

The Cabal is a coven of characters originating from all strata of a society that has lost all sense of decency, perspective and morality. The goldfinch is relatively safe as the cage protects it from the clutches of the conniving monsters on a warpath of destruction. Replacing the trapper of the traditional village setting, Big Brother, caged bird in tow, carries a very ominous and unsettling charge of dominion. The higher echelons of Maltese society and some members of the corporate world were irritated by the incessant birdsong.

The cage’s structure in SLAPP is ready to buckle under the weight of a corpulent man, reminiscent of Lucien Freud’s Naked Man, Back View. Caruana Galizia was served with such a financially crippling lawsuit courtesy of powerful individuals implicated in wrongdoing in her blog. Libel simi­larly depicts a very muscular man intent on flattening the cage and crippling the songbird in much the same way.

The journalist’s famous last eight words “There are crooks everywhere. The situation is desperate” still echo and linger on as reminders that Malta has indeed not been passing through the best of times, a mantra that anaesthetised the gullible into a collective torpor of fictional well-being. 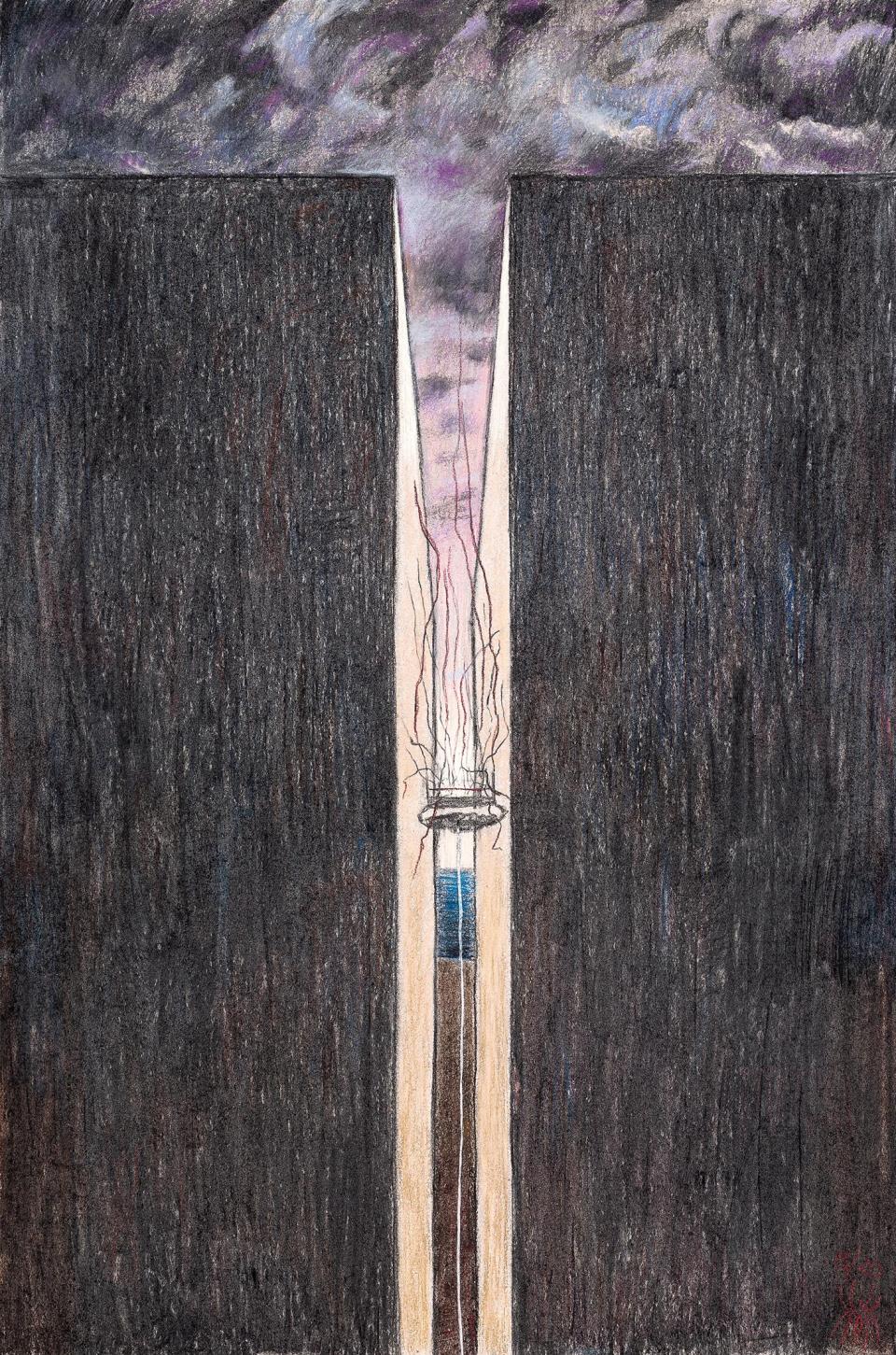 The Free Spirit vs The Corrupt State

Caruana Galizia’s last words are the titles of three paintings with a claustrophobic composition. A vortex of im­personal hands engulf and overwhelm the cage until it comes apart in Eruption and the finch is released to immortality. Martyrdom creates heroes; the whole world was shocked and angered by this cowardly attack on free speech.

The exhibition is a graphic novel of chronology. Farrugia’s narrative subsequently changes as he explores the events in the wake of Caruana Galizia’s murder on that fateful day in October of three years ago.

In Il Mandante, he depicts the crime-leader in the shadows, his necromancer hands ready to weave an alternative narrative into an alibi. He makes fun of the situation, his hands mimicking a bird executed through his nefarious designs. The title, intentionally in Italian gangland and Mafia jargon, implies an international dimension to the sordid affair.

Attempts at dehumanising the journalist resulted in the unabated removal of her memorial in Valletta by the authorities. The lame excuse that the spontaneous memorial was damaging a national monument came across as an insensitive and untimely comment.

In any case, most national monuments lie in a state of disrepair, abandonment and general irrelevance.

A series of paintings comment on the reluctance by the authorities to seriously investigate the death of Caruana Galizia, on the proverbial sweeping under the carpet of her breaking news stories of corruption and shady dealings and on the inhumane indifference of a section of the public to a sponsored assassination. 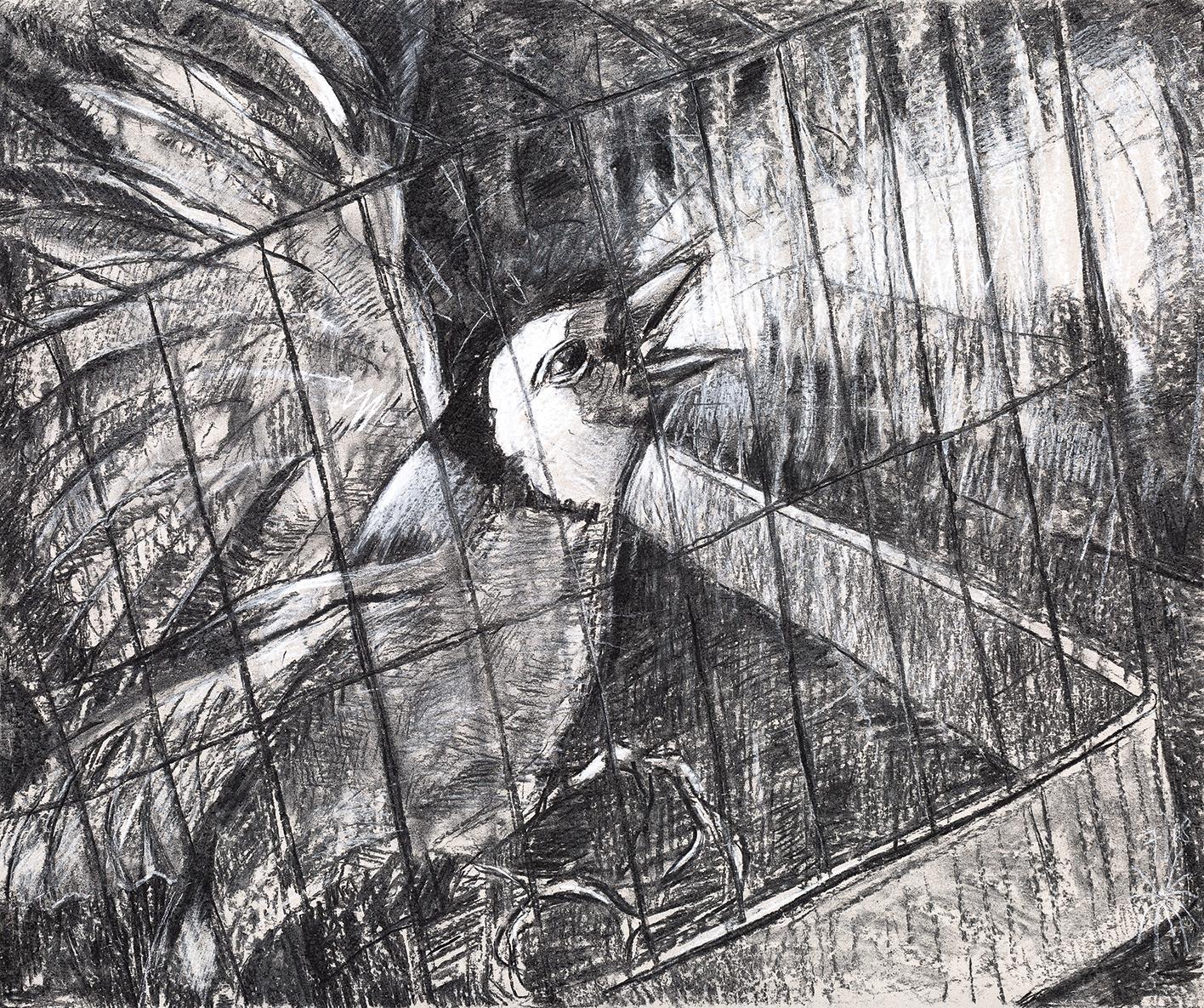 The Songs that Travelled Far and Wide

Farrugia uses a comic strip format in The Corrupted to demonstrate a deterioration of journalistic ideals depicted as a bird in full song that transforms itself into a soulless paper bird. Ideals and ideology are urged to lose colour and song by being invited to metamorphose into politically serving automatons. Journalistic silence can be purchased at a price.

Person of Trust evokes the world of Odilon Redon. This oxymoron, this political justification for the employment of the inept party faithful to advantageous positions, pepper the public sector with widespread incompetence. The suit and tie are costumes, worn to conceal whatever lies beneath. However, the head gives the game away as the urchin loses its disguise. Its incompetence and incongruency is revealed to one and all.

The tatters of The Egrant Report at the mercy of a mollusc imparts a whiff of entrenched deterioration that no ‘official’ investigation is able to mitigate. This is the last monochromatic work in the series, conceptually concluding a chapter in the narration.

Hope is the last to die in the subdued chromaticism of the last chapter of paintings in the series. Rising Truth suggests light at the end of the tunnel in the daily revelations in court cases of shady deals and corrupt practices by people in high places.

The ship, symbolising international agencies, is monitoring the mess and gets closer to the shore in The Fog. 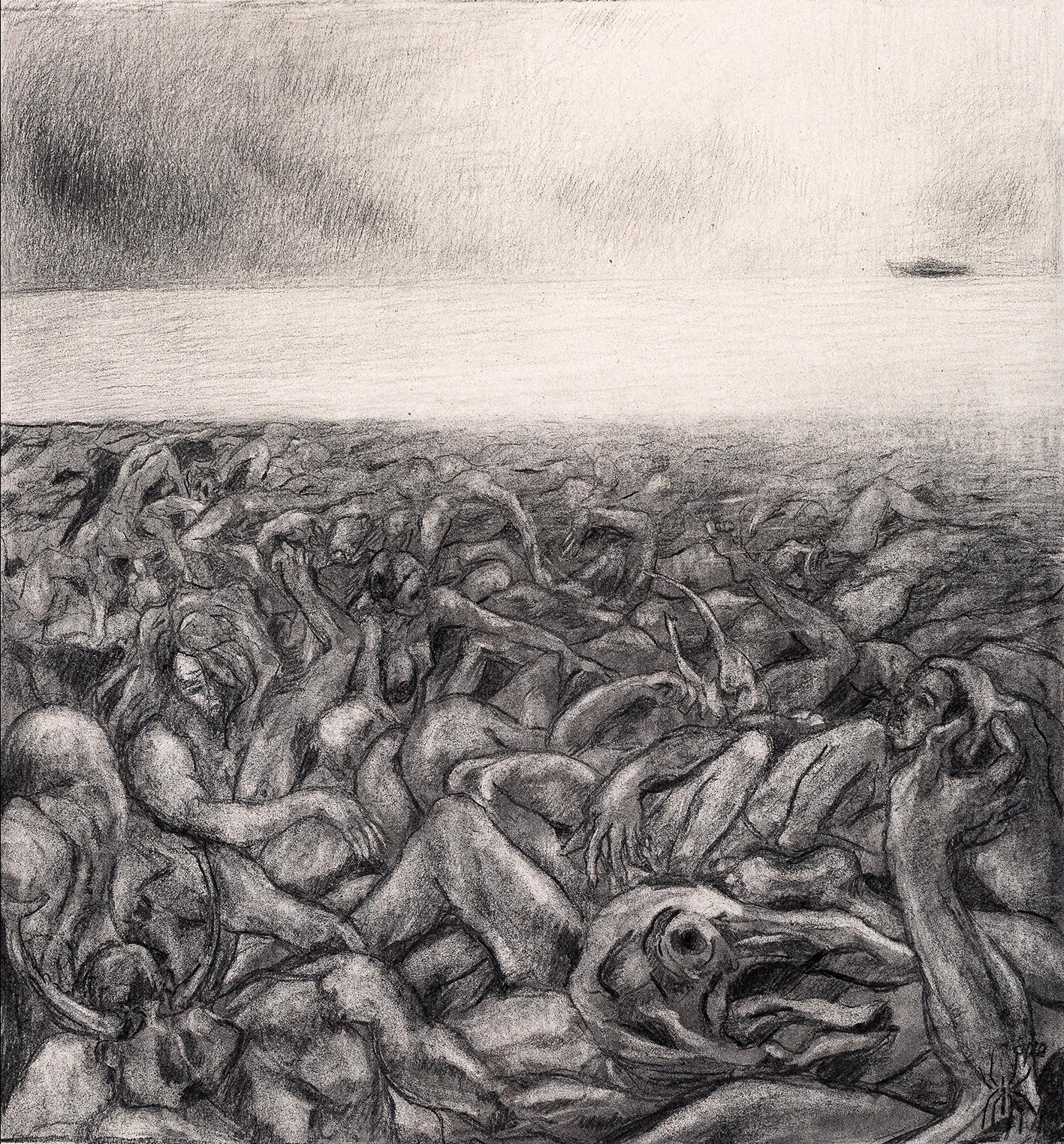 The painting The Free Spirit vs The Corrupt State concludes The Goldfinch series. Two land masses threaten to overwhelm and destroy the defiant cage, a wedge challenging all odds. Farrugia declares that redeeming truth will finally prevail. There will be a time of reckoning and a murder will be avenged and heads will roll.

The iconography of the cage, a claustrophobic enclosed space, both prison and refuge, evokes Fernando Botero’s Abu Ghraib Series of 80 paintings, sketches and drawings based on the abuse of prisoners of war in 2004 at the Abu Ghraib prison in Iraq at the hands of the US soldiers. Botero’s signature corpulent prisoners, naked, blindfolded and handcuffed are made to suffer all sort of vile indecencies and sadistic excesses at the hands of their American captors. The US, the ‘paragon’ of the free world, has an unenviable history of such depravities.

Quoting Botero himself: “These works are a result of the indignation that the violations in Iraq produced in me and the rest of the world.” It took him 14 months to complete the series while it took Farrugia almost three years to finalise his.

The prison bars failed to protect the victims of the Abu Ghraib atrocities. Their American captors satisfied perverse whims at any time as they held the keys to the prison doors. It is so painfully ironic that our country is seeking to sign a questionable agreement with a military superpower that treats its prisoners-of-war through obnoxious depravity and dehumanising oppression.

In American novelist Toni Morrison’s words: “The best art is political and you ought to be able to make it unquestionably political and irrevocably beautiful at the same time.”

Anger, disgust and pain can be integral parts of that equation as well.

The Goldfinch opened yesterday and runs until October 25 at Splendid, 74, Strait Street, Valletta. It is open Monday to Friday from 12.30 to 2.30pm and 4.30 to 7.30pm and on Saturday and Sunday, from 10am to 1.30pm and from 4.30 to 7.30pm. Due to COVID-19, people are asked to follow pandemic regulations. All proceeds from sales will be donated to the Daphne Caruana Galizia Foundation.