Theatre
The Importance of Being Earnest
Manoel Theatre

I have long enjoyed the incisive wit of Oscar Wilde and his plays are a joy to read as well as experience on stage.

The scripts are so tight and clean, the dialogue sharp, that if done well, his plays will never appear dated.

MADC’s production of The Importance of Being Earnest at the Manoel Theatre, takes Wilde’s most loved and certainly well-known play and presents it, period setting and all, as a straight, classic piece.

With director Malcolm Galea at the helm, the one thing this play certainly got was a firm hand steering it towards the balance it required between the more physical, near-ridiculous comedy of improbable circumstance and the cleverly-wrought societal observations and linguistic acrobatics that the script makes.

Well-balanced and well-cast, the play featured two small cameos by Martin Azzopardi as Lane and Edward Thorpe as Merriman, two butlers who have to put up with the foibles of their respective masters, proving that the upper classes are really rather useless without the help.

The setting could not have been more appropriate

The first act of the play was rather more uneven than the second, with the initial scene, set in London, perhaps the most enjoyable one. It set the pace well and eased the audience into the plot very well. It was however, the second scene, set in the country, which rather slowed down the pace.

While Isabel Warrington’s Miss Prism and Michael Mangion’s Rev. Canon Chasuble gave admirable character interpretations individually, their dynamic felt rather off and somehow slowed the scene’s pace rather too much.

Fortunately, the second act picked up speed again and reset the course to a steady pace, no doubt aided by the rhythm of the quick one-liners and the main cast. 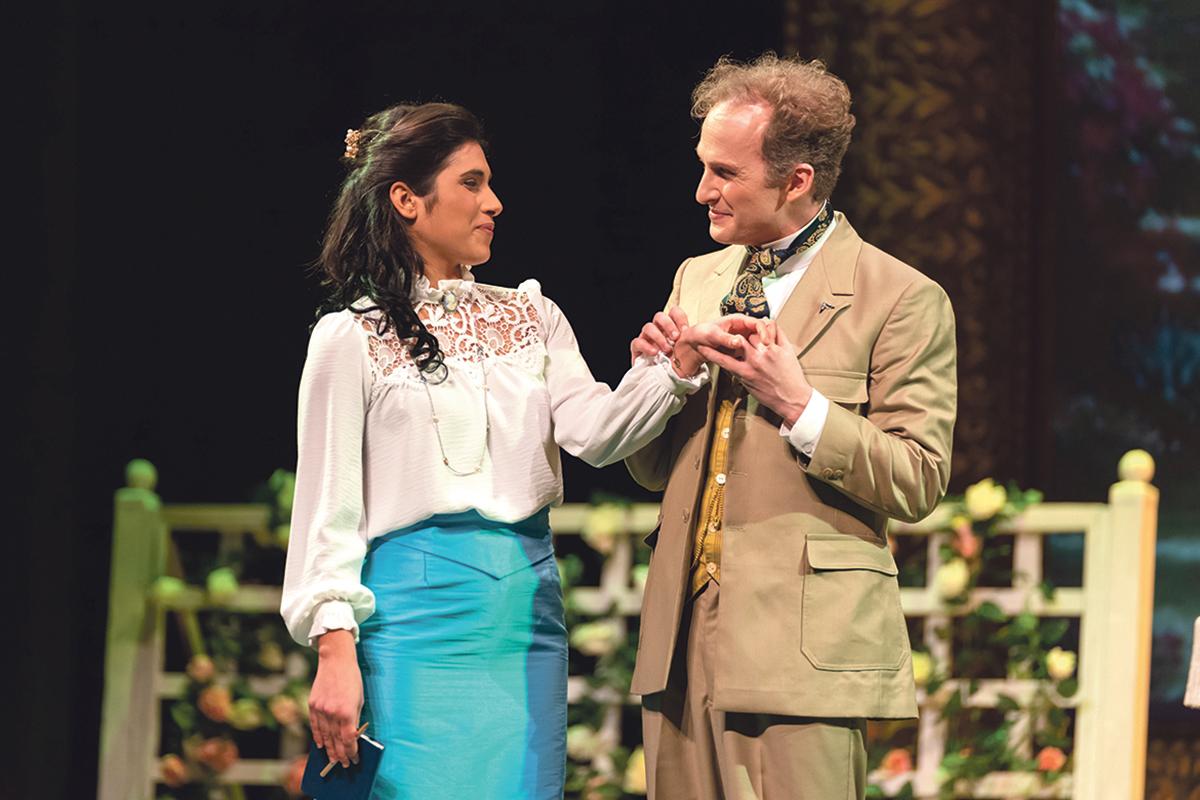 Michela Farrugia and Edward Caruana Galizia in The Importance of Being Earnest.

On her part, Aquilina, has as always, managed to make Gwendoline her own – with all the contrasting attitudes of a snobbish girl who is used to getting her way, while also being extremely likeable in her charming sweetness.

The same can be said of Michela Farrugia’s Cecily Cardew, whose surface naivety belies a much stronger grasp of how things could be done… to suit her.

These four characters are, of course, central to the plot development and carry off some of the best comedic dyads in the play, but undoubtedly, their interaction with Gwendoline’s mother, Lady Bracknell, played by Marylu Coppini, is what creates the incredibly satisfying dynamic in the contrast between old and young.

Authoritative and ridiculously imperious, Lady Bracknell’s lines are some of the most iconic in the play. Coppini gave a solid portrayal of a memorable and much-loved character, making her stand out with her attitude and condescending tone.

With period costumes and the baroque architecture of the theatre itself, the setting could not have been more appropriate.

It seems as though there has been a return to having at least one classic play per season, and this far MADC has not disappointed.

The Importance of Being Earnest is still as refreshingly funny as it was when it was first performed almost 125 years ago to the week. After all, love, social obligations and difficult relations will never quite change. Definitely one to watch and enjoy.

The Importance of Being Earnest is being staged at the Manoel Theatre today and tomorrow at 8pm and on Sunday at 7pm.